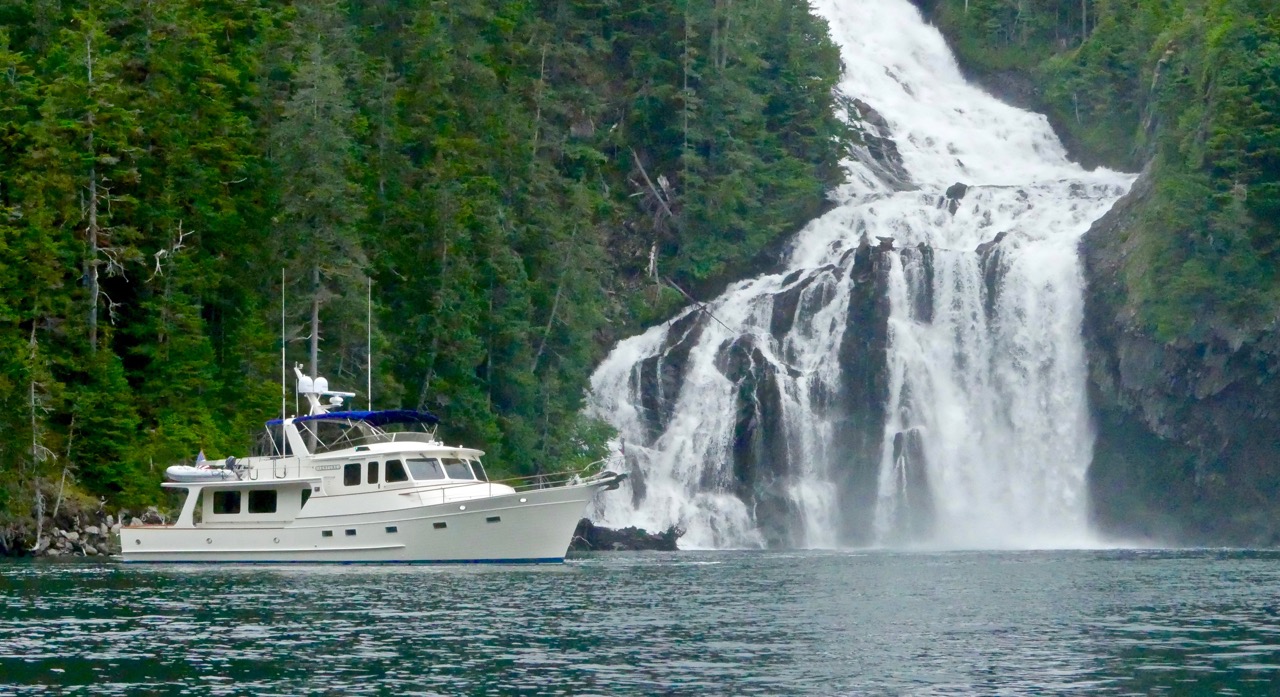 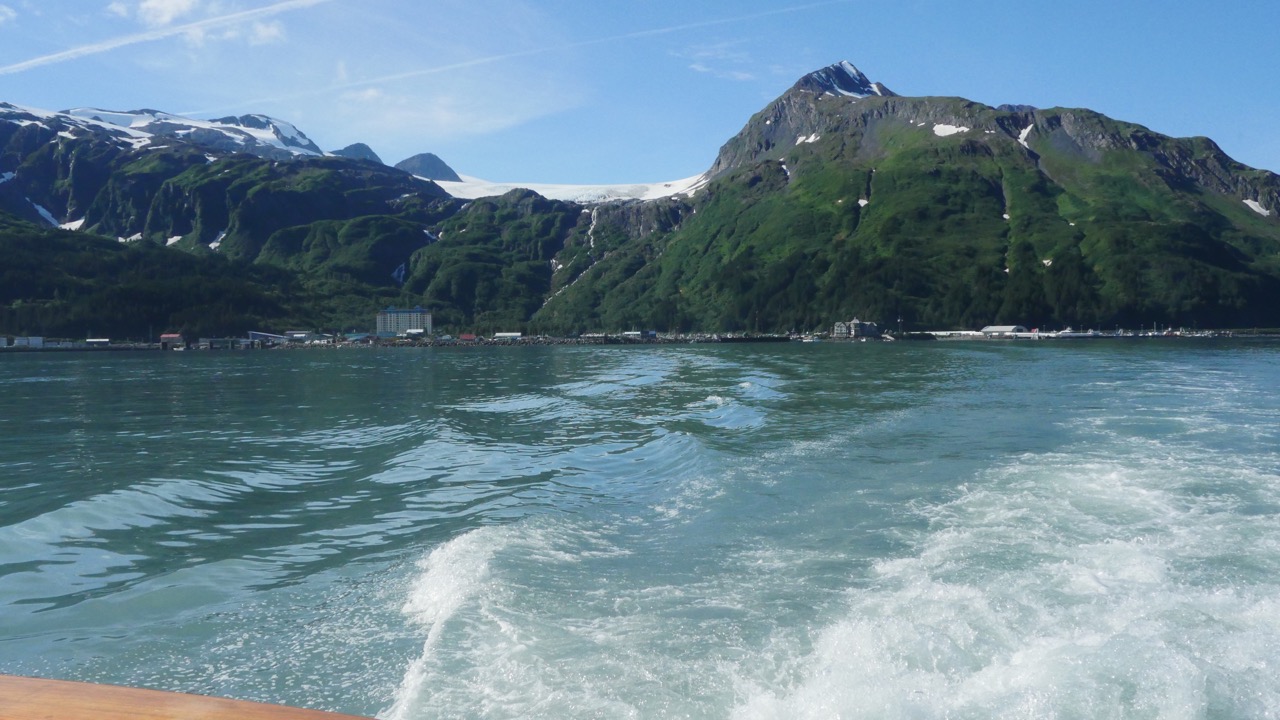 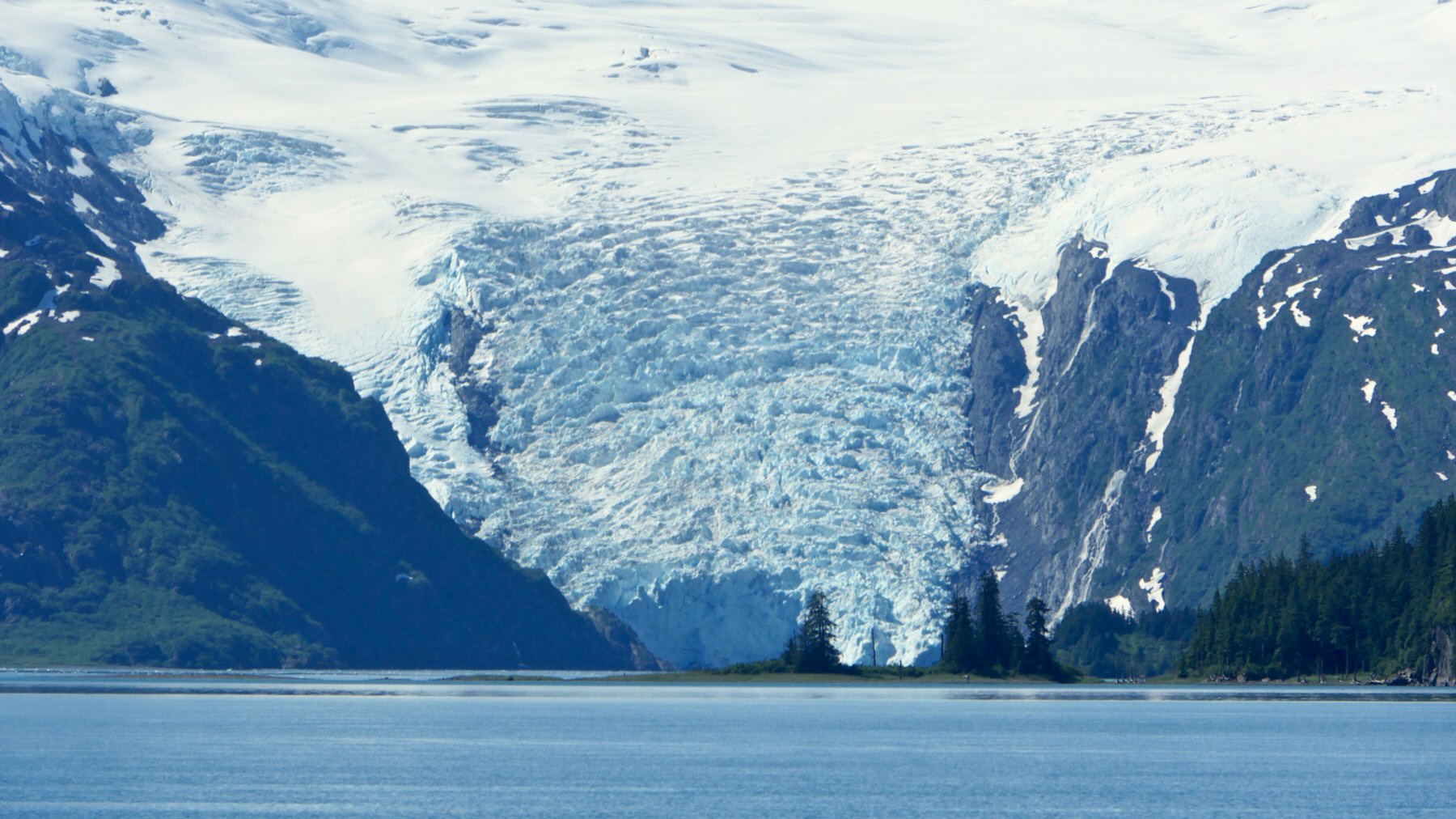 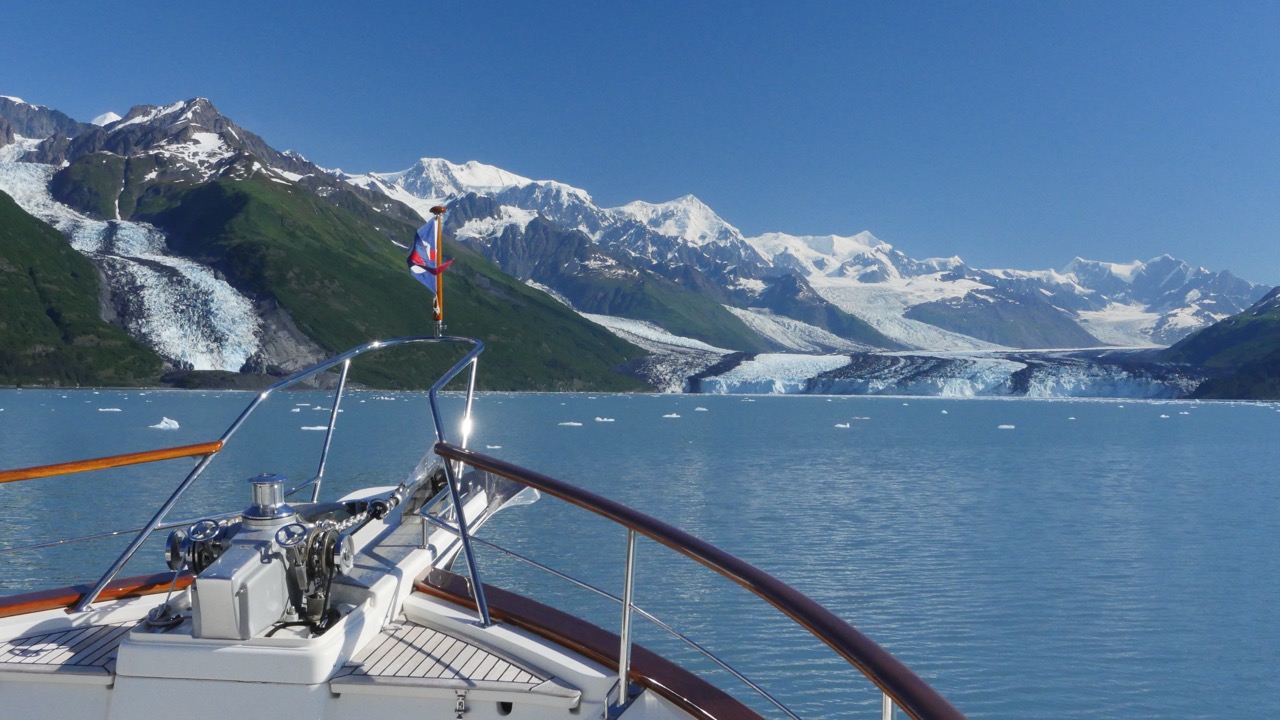 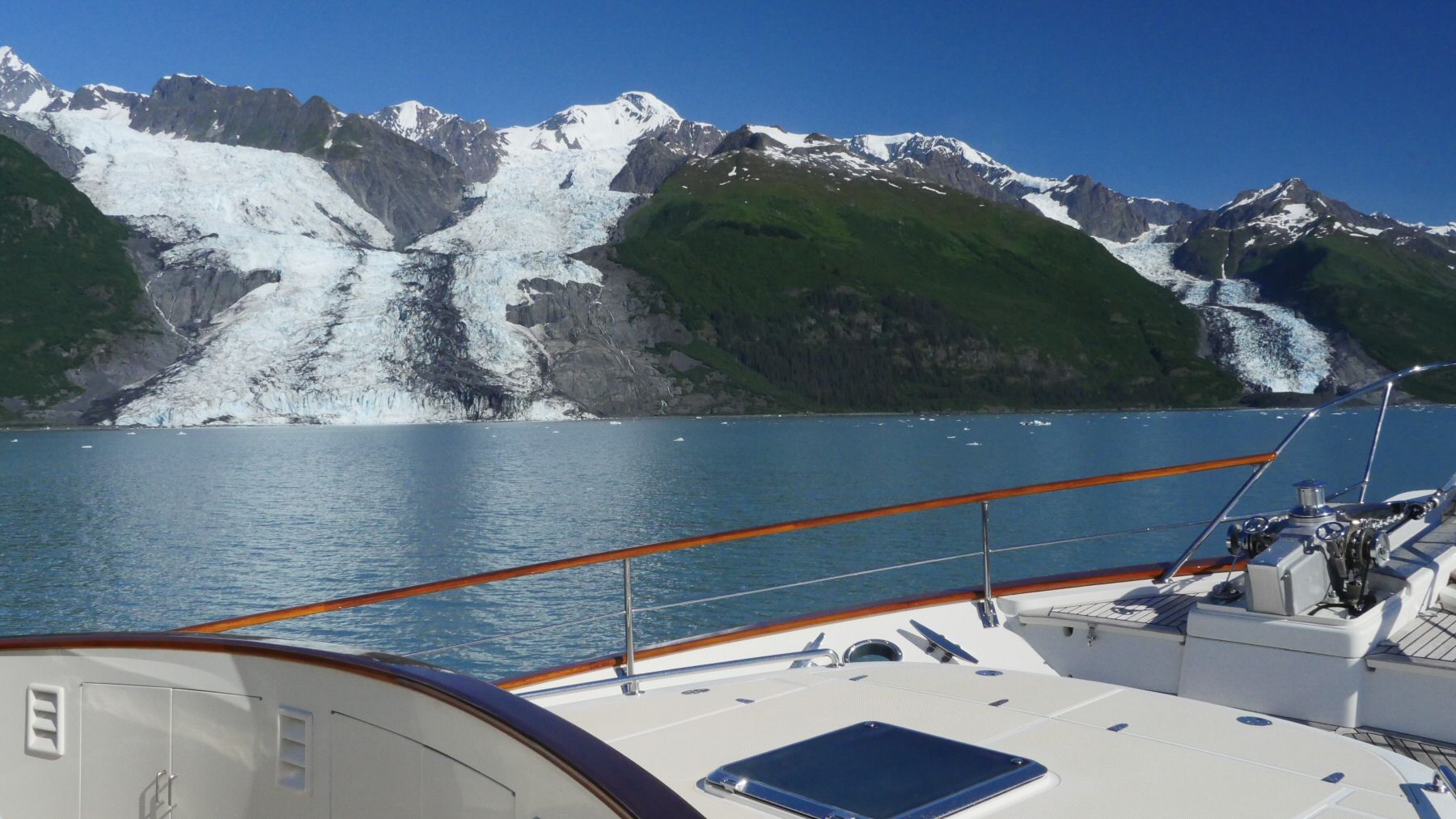 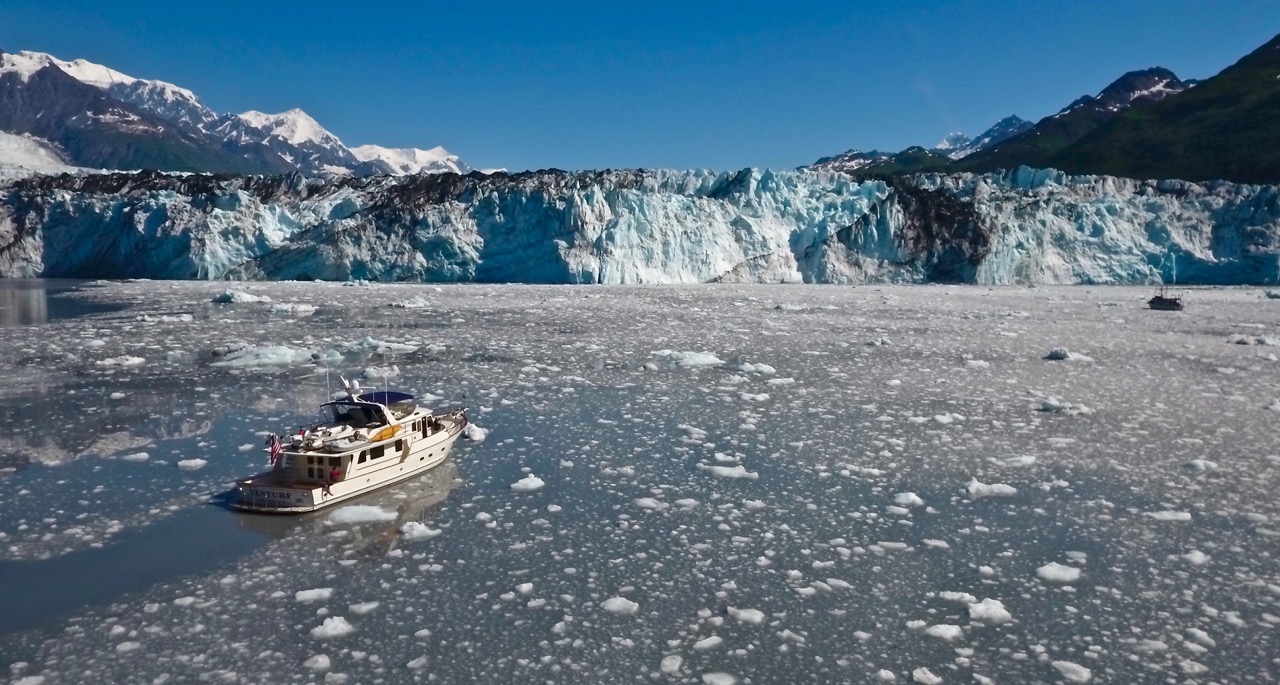 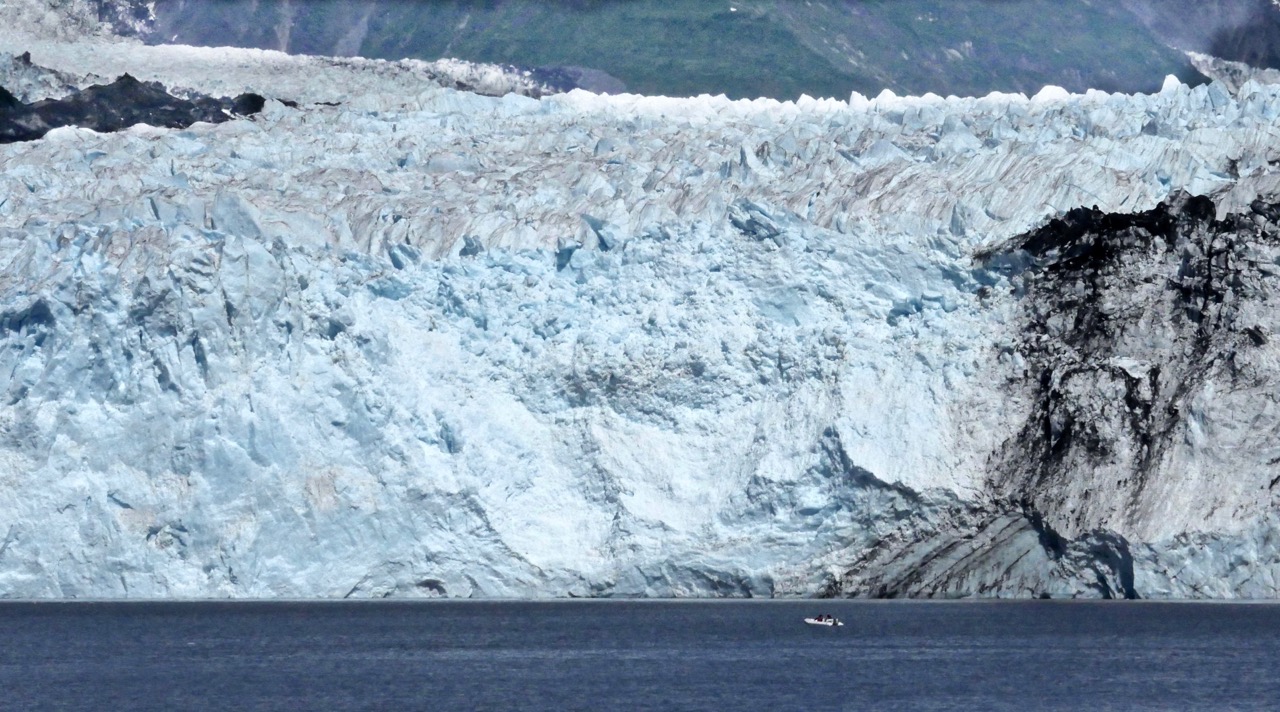 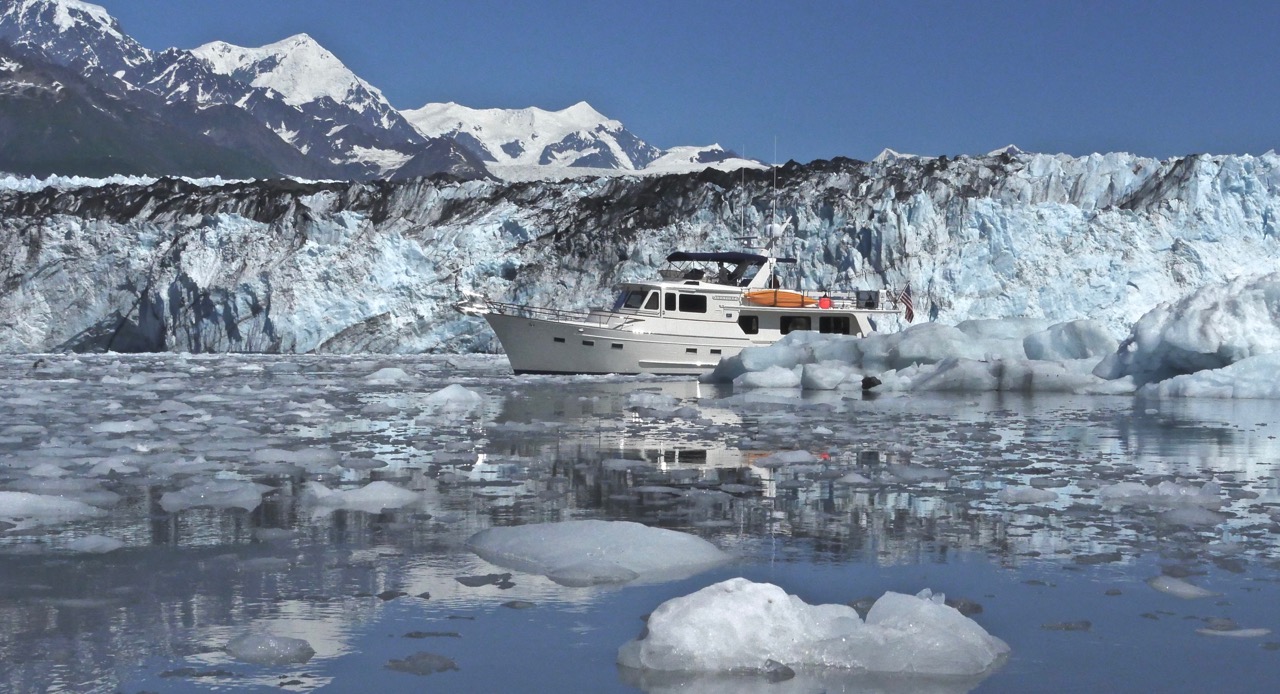 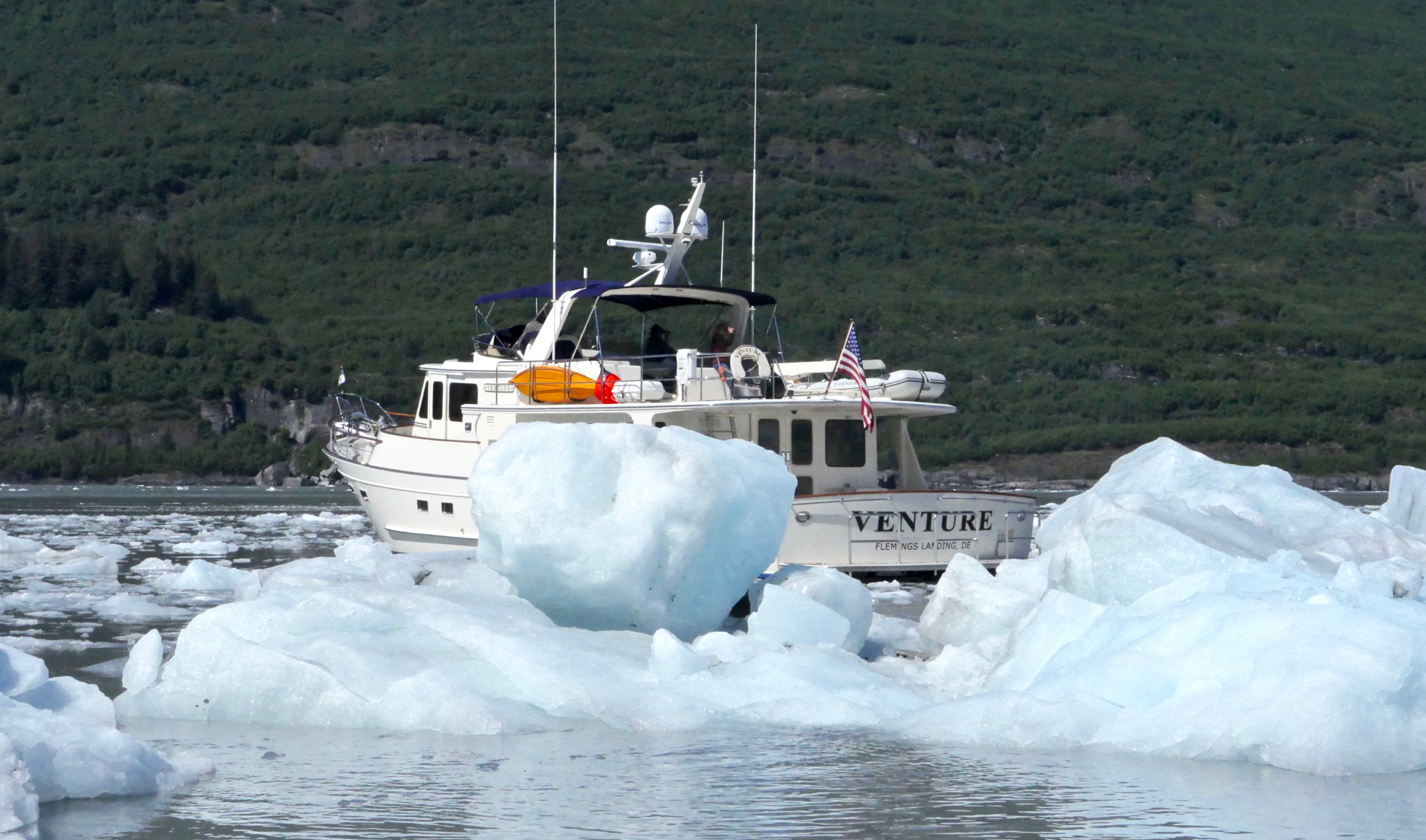 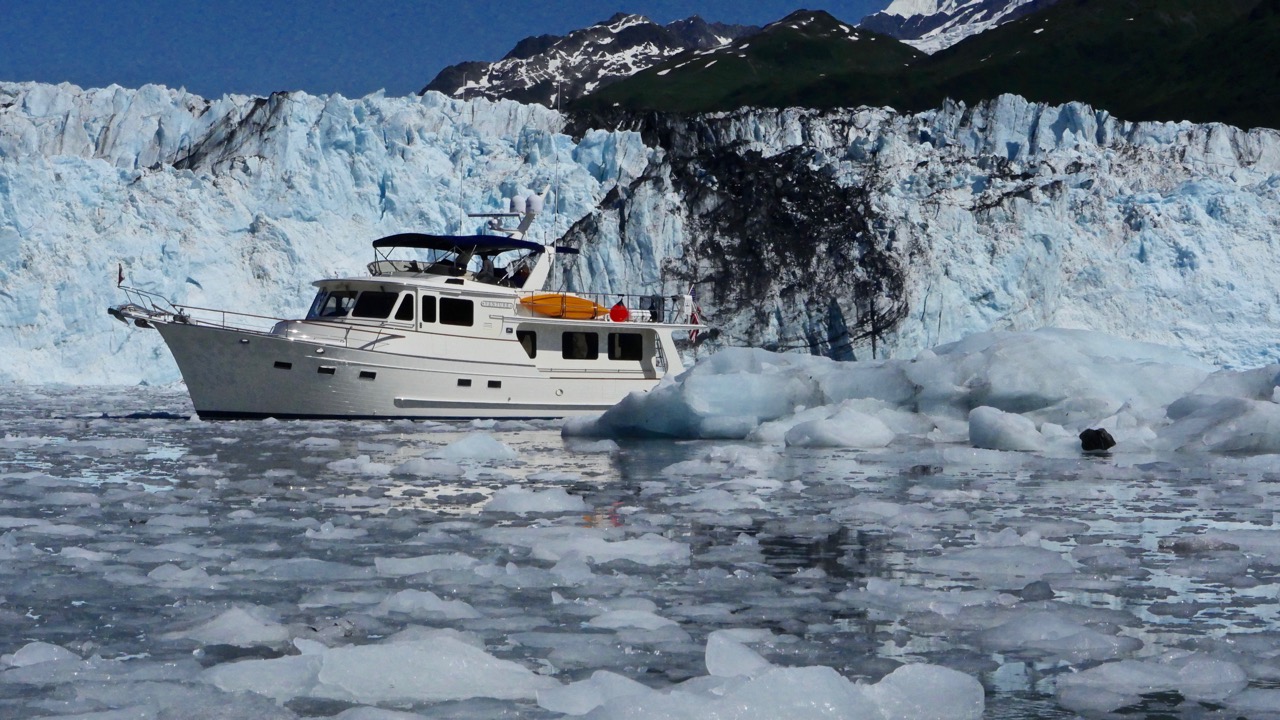 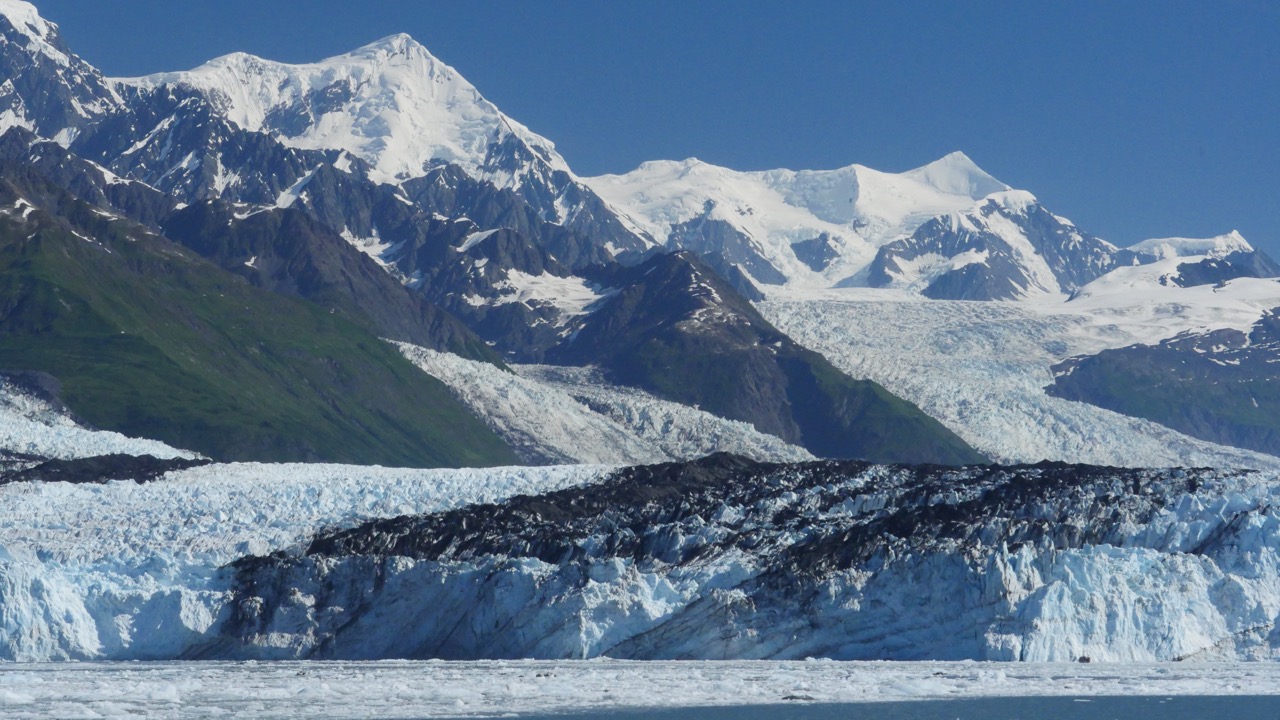 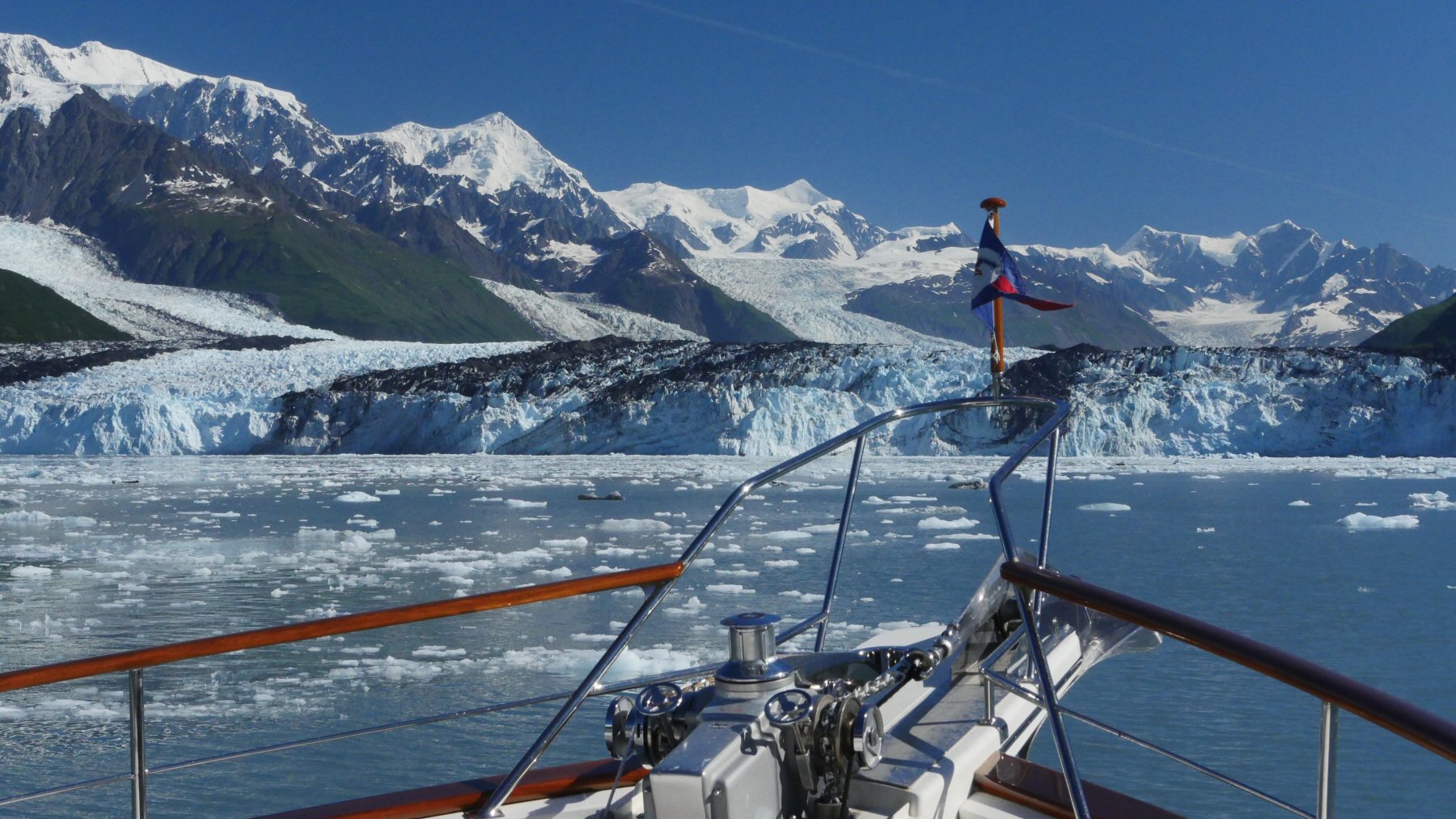 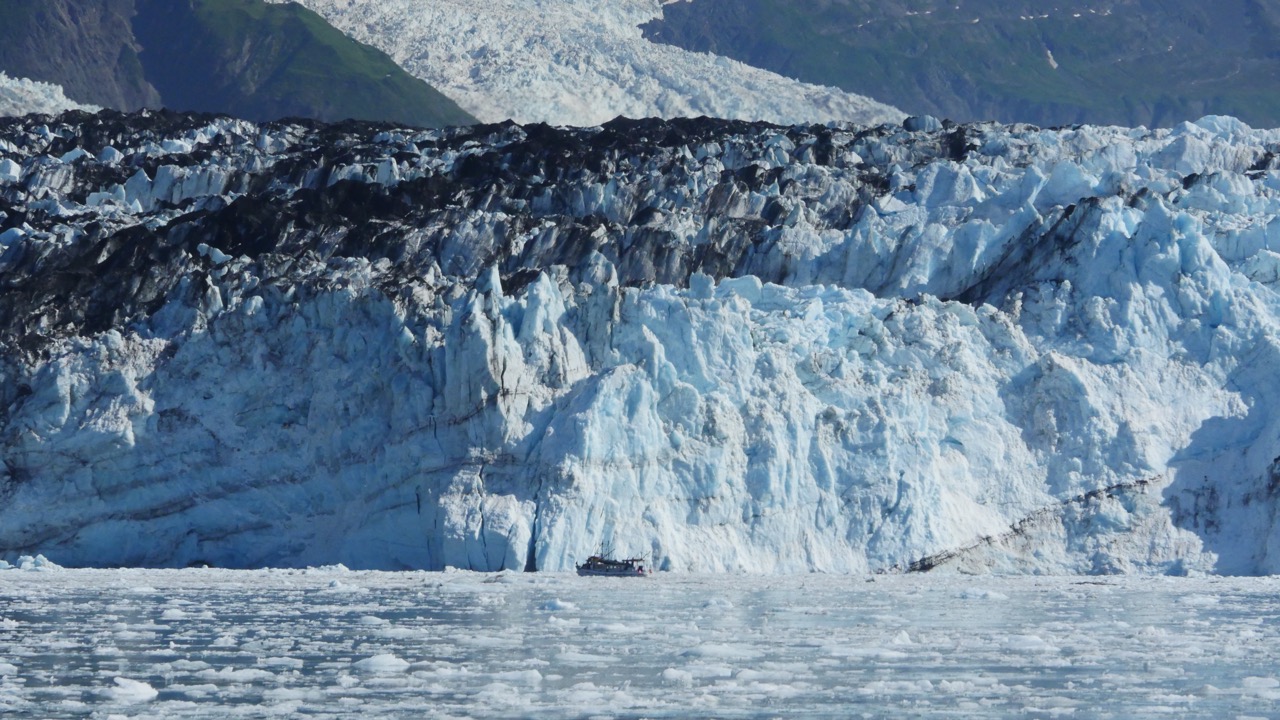 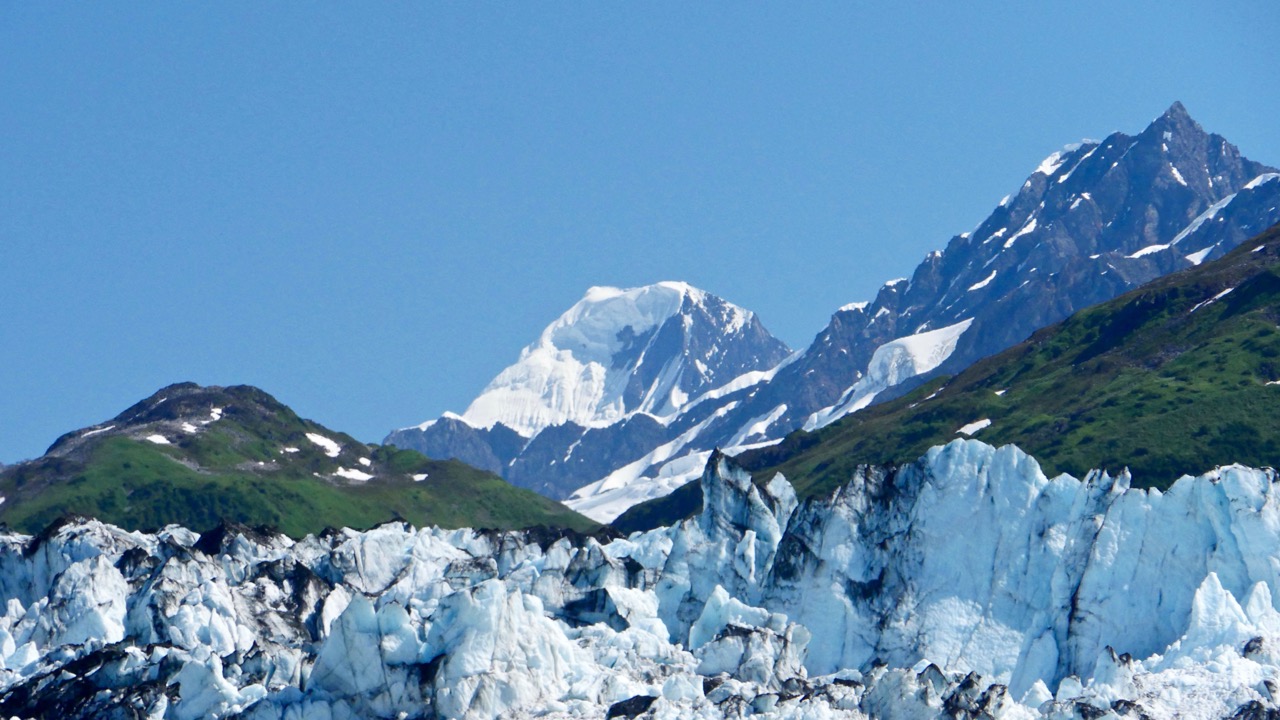 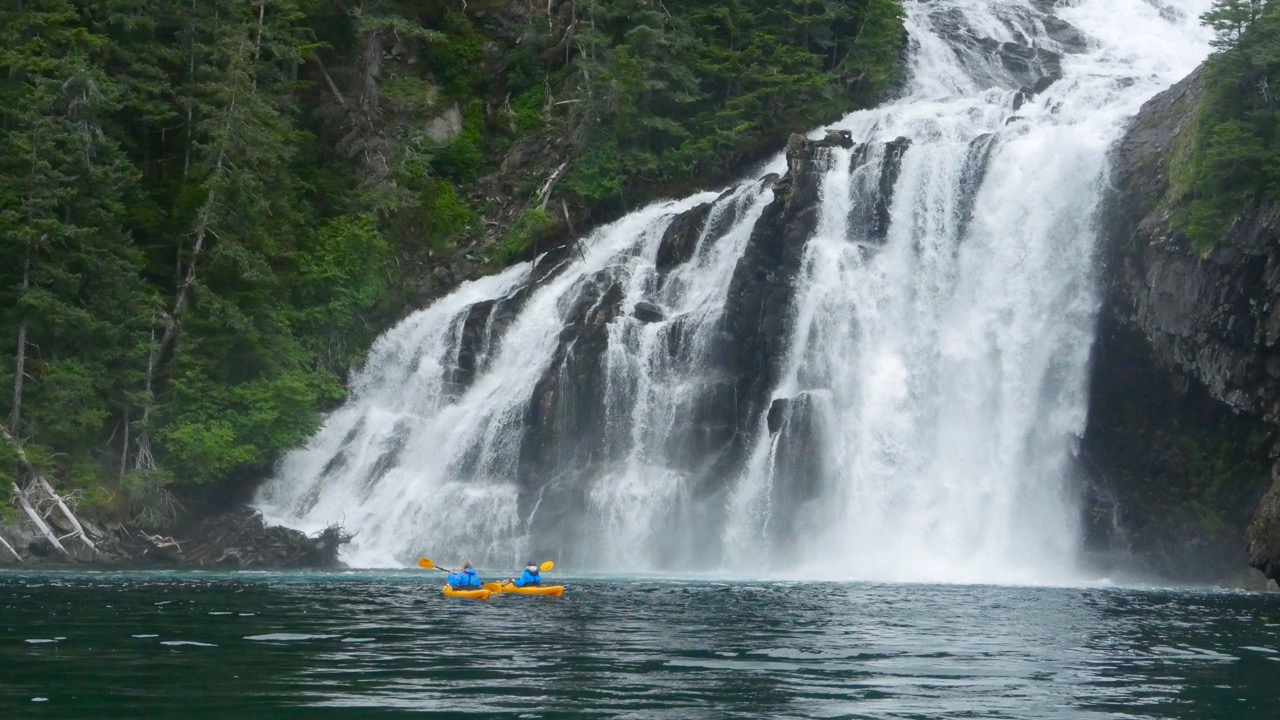 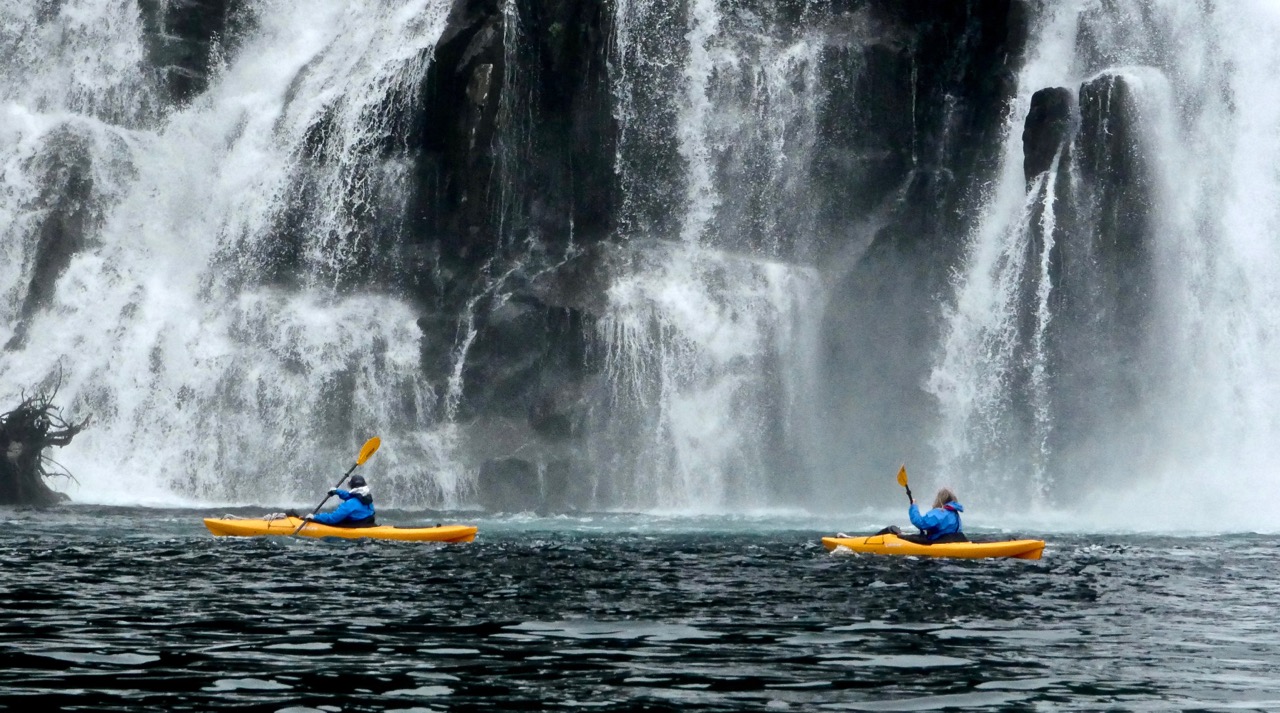 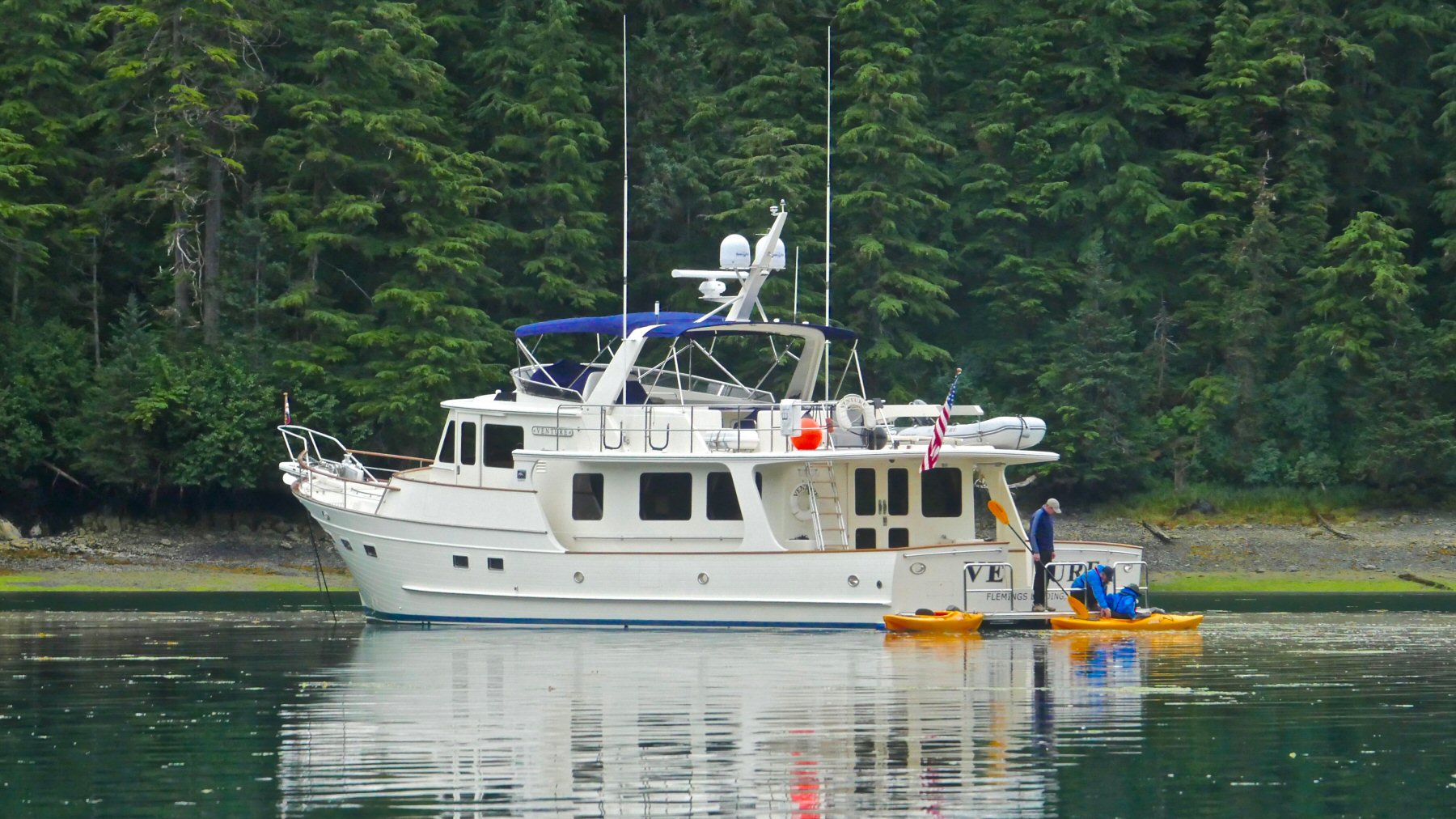 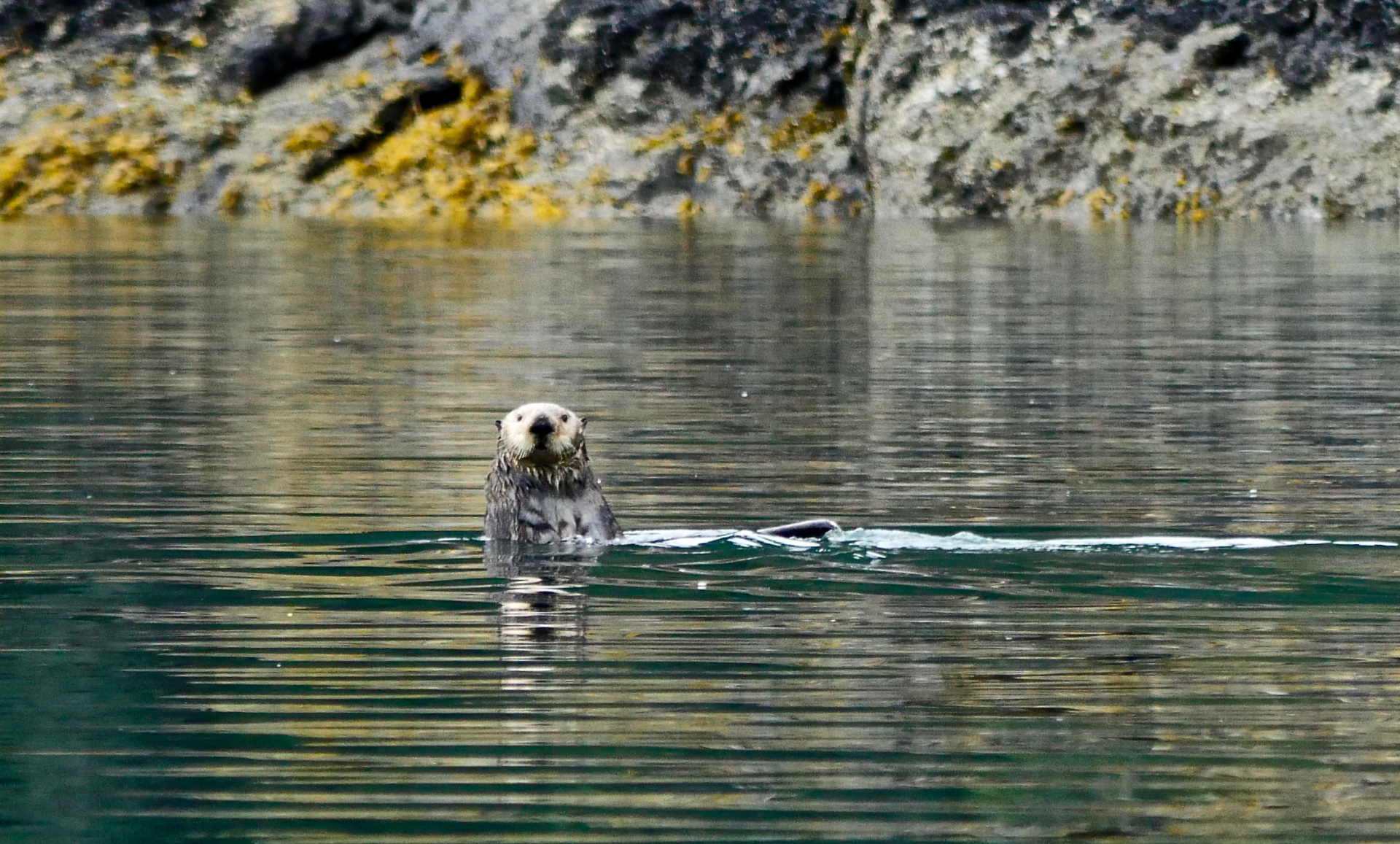 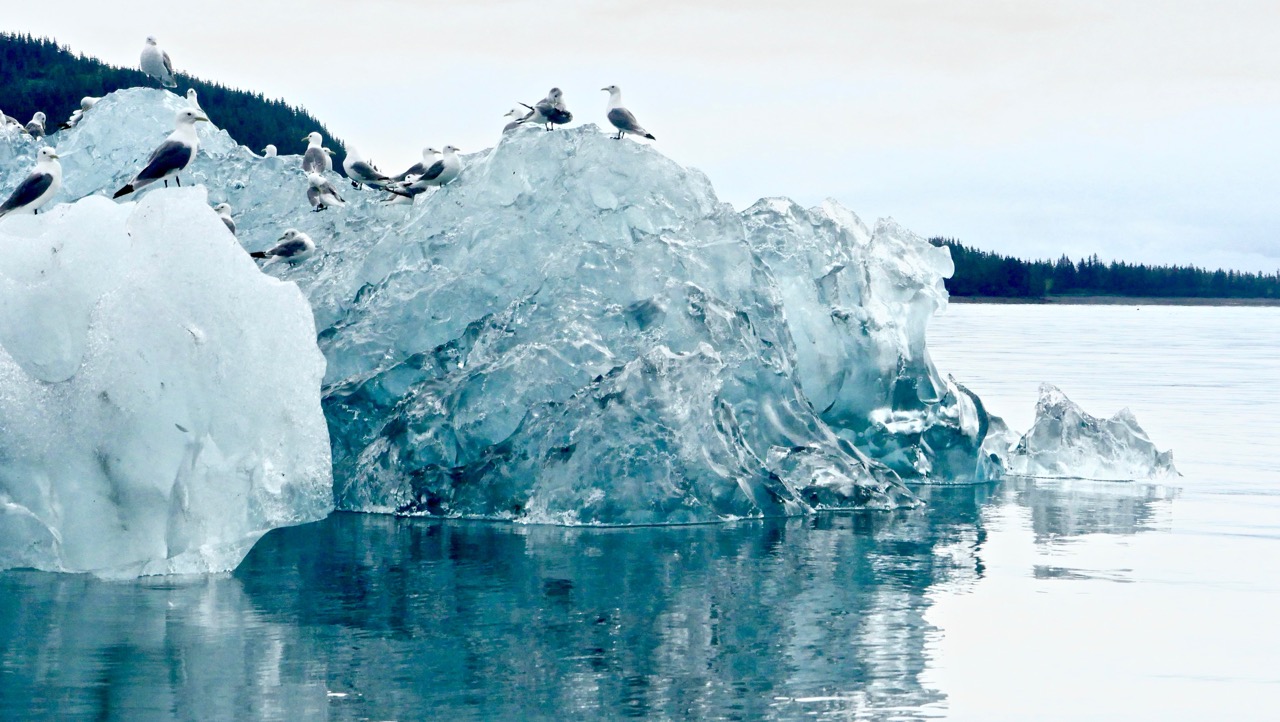 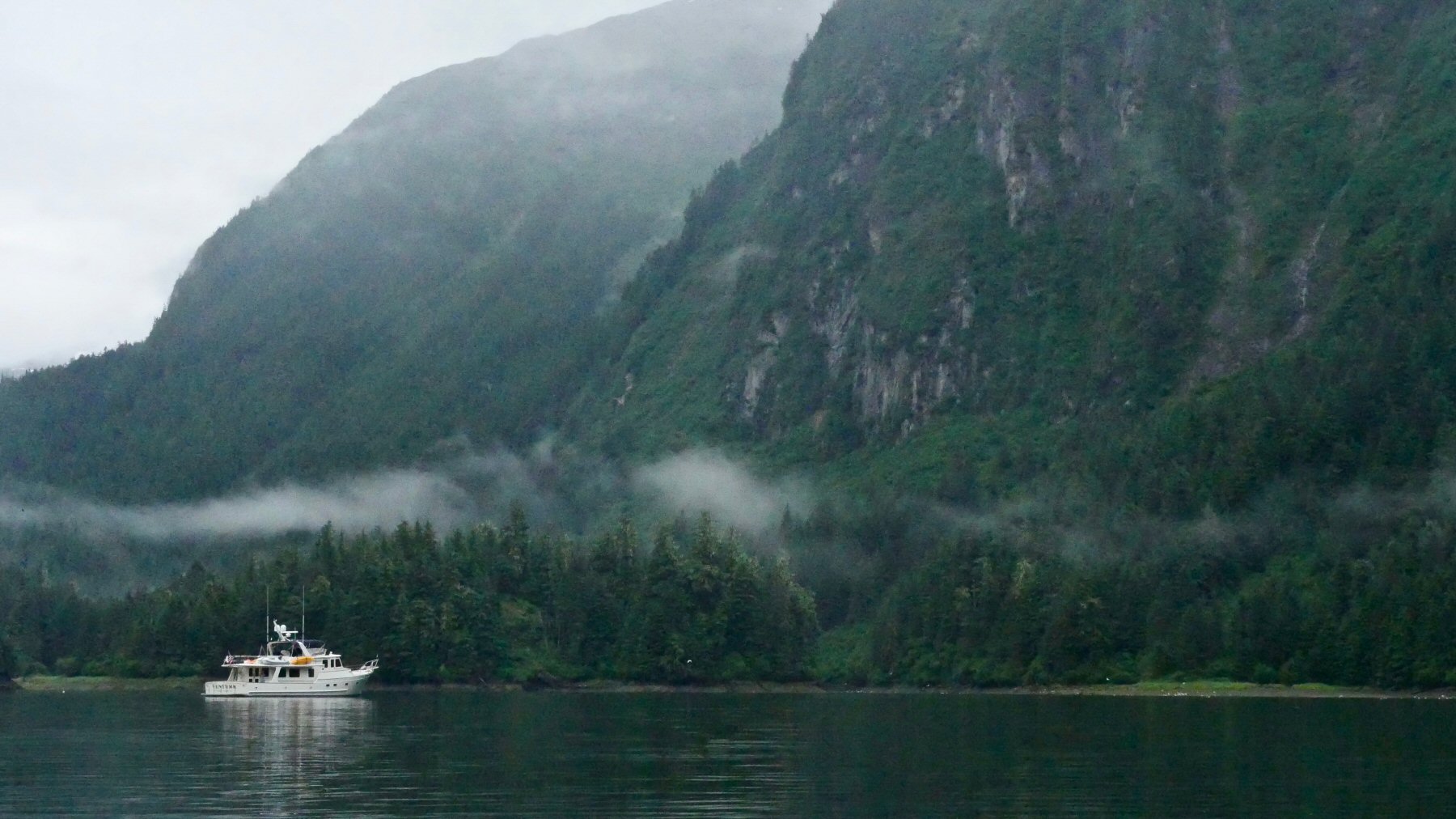 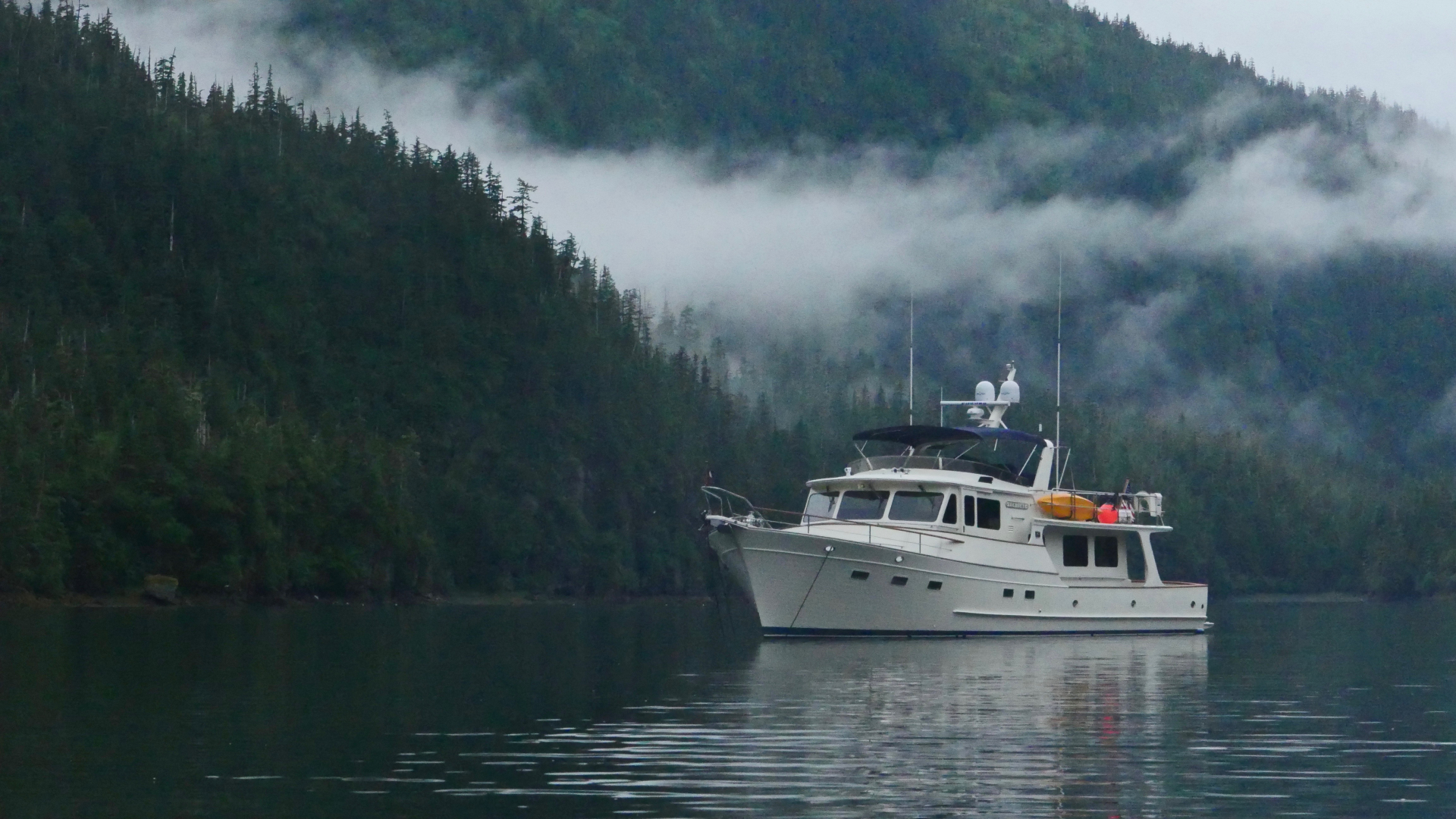 We are underway at 1030 when Discovery has to leave for a charter. It is a stunning morning and we cross Passage Canal to a large waterfall where large numbers of kittiwakes are nesting. We head next to nearby Blackstone Bay with its series of dramatic glaciers - especially Blackstone at its head with impressive waterfalls. We then move to an adjacent bay with more glaciers and a large waterfall. At one spot, named Deathtrap, the face of the glacier is out of sight from the base of the cliffs so the first anyone in that location would be aware of a calving would be when tons of ice came raining down on them. Checking my photos, it is very obvious that the ice has receded appreciably since our last visit. After a couple of hours, we leave for Port Wells. We watch the Star Princess approaching and are surprised to see she turns up College Fjord rather than heading direct to Whittier. We pass a number of seiners fishing off Point Piggot, turn into Pirates Cove and anchor at 1645.

Another beautiful morning. We are underway at 0735 up Port Wells and into College Fjord. As we proceed to Harvard glacier at the head of the fjord, along our port side we pass Wellesly. Varsar, Brym Mawr and Smith glaciers in that order. These were all named by the Harriman expedition in 1899. The ice is quite thick as we approach Harvard but not nearly as thick as our last visit in 2013. We are surprised to see Discovery is there right in the thick of the ice. There is frequent calving - though hard to video. We fly the drone and launch the tender to take photos of both Venture and the tender against the towering glacier face. It is a wonderful day in magnificent surroundings and it is hard to tear ourselves away at 1430 when we make our way back through the ice and briefly turn into Yale Fjord to see the glacier at its head. There are many seals on the ice in this fjord but all very wary and skittish. Back in College Fjord we attempt to moor in Coghill but the bottom rises abruptly some distance from shoreline. We continue on to Hobo Bay where we had anchored in back in 2013. It's Saturday and a few other boats are anchored there.

Another stunning morning. We go first to Cascade glacier and waterfall and then to adjacent Barry glacier. From there we move on to Surprise glacier and wait - myself with finger poised on camera trigger - for something significant to happen. It is a cloudless blue sky and the face of the glacier is dazzling white so when switching to camera viewfinder it appears black until the eyes adjust. Shooting in 4k, the image has sufficient resolution that I can shoot fairly wide and then zoom in during the editing process. Eventually, after three long hours, patience is rewarded and a large slab slides into the water with a crack and a boom. Venture rises and falls from the resulting swells. With expectations satisfied we move to anchor in Granite Bay but, despite several attempts, the bottom proves too rocky for the anchor to grip. We move back to Pirate's Cove and we finally get the hook down at 1825.

After a late start at 1014 we go to Cascade Bay to see what is billed as the falls with the highest volume of water in the Sound. We launch the kayaks and the tender and shoot stills, video and also drone footage. We take both the tender and the kayaks right up to the foot of the falls which thunder down a few feet away and drench us in fine spray. Later, we attempt to anchor in Eaglek Bay Head but, once again, the bottom is too rocky and we have to move to Schoppe Bay and through a very narrow entrance, only navigable at high tide, into Schoppe Lagoon. Once inside we appear to be in an entirely landlocked body of water. We see black bears in the distance fishing at the mouth of a rock strewn stream.

It is extremely low (-3ft ) tide when we awake and the tidal flats - covered with green weed - have moved disconcertingly close to the boat. We see what appears to be an adult eagle teaching the rudiments of salmon fishing to a rather clueless young bird. A mother bear and two cubs are fishing for salmon at the mouth of the stream. We are surprised to see an inflatable boat enter the lagoon with 14 people aboard. They head for the shore and unload their passengers. They turn out to have come from Discovery which is anchored in the Schoppe Bay. We launch our small tender and Chris, Christine, Rachel and David checkout the narrow entrance and then go ashore for a recce. We have to wait until 2 pm before it is safe to exit the narrow entrance which we do at high tide without incident. We make our way across to Long Bay and see some errant ice floes from the Columbia glacier along the way. We anchor in the West Arm as far up the bay as the shallows allow. This is a beautiful spot with many islands. Salmon are jumping clear of the water all around us.

We spend the day here. Christine and Rachel set off in kayaks while David, Louisa and myself go in the large tender to explore the area around Billy's Hole. We cannot get up the streams until high tide this afternoon. There are countless schools of salmon everywhere. The seals on the rocks are not quite as skittish as usual but all dive in at the sound of a click from the outboard controls. I have shot much more video than I had anticipated and am down to about 20 minutes on my last camera card. There are two new cards waiting for me in Cordova. In the afternoon, with high tide, we return to the streams in the tender. There are huge amounts of salmon jumping and swimming in huge schools beneath the surface of the clear water. There must be literally millions of them in Long Bay alone.

Underway at 0738. We again pass ice floes from the Columbia glacier and see many otters floating on their backs. Some are nonchalant as we pass while others disappear beneath the surface while we are still far away. We make our way into Bear Trap Bay through a dogleg entrance and pass a lone rock, barely showing above the water, covered with seagulls. We anchor at 1254. It is grey, gloomy and rains all day so we relax on board Venture and read. A Prout catamaran comes into the bay and a couple of guys come over in their tender to tell us that they have seen enormous numbers of salmon in the inlets at the head of the bay which can only be entered in the tender at high tide.

It is still overcast with skeins of cloud hanging in the trees but the rain has let up. We launch the big tender and head into the narrow inlets to see what we could see. In the more easterly of the two there are indeed unimaginable quantities of fish but very few eagles and no bears. There are numerous dead fish in the water. It seems that, when fish are eaten in the wild, it is the heads that are preferred - leaving untouched the parts that we prefer to eat. We stay out for about one hour before we up anchor and head for Cordova. We pass many fishing boats en route - an indication that there is an active fish opening. Despite this, we have trouble finding a good berth and finish up in one rather too short for Venture's length.

After checking the weather forecast, we decide we need to leave Cordova and wonderful Prince William Sound tomorrow and head directly for Sitka on the first leg of our long journey south. This will be covered in a future blog.