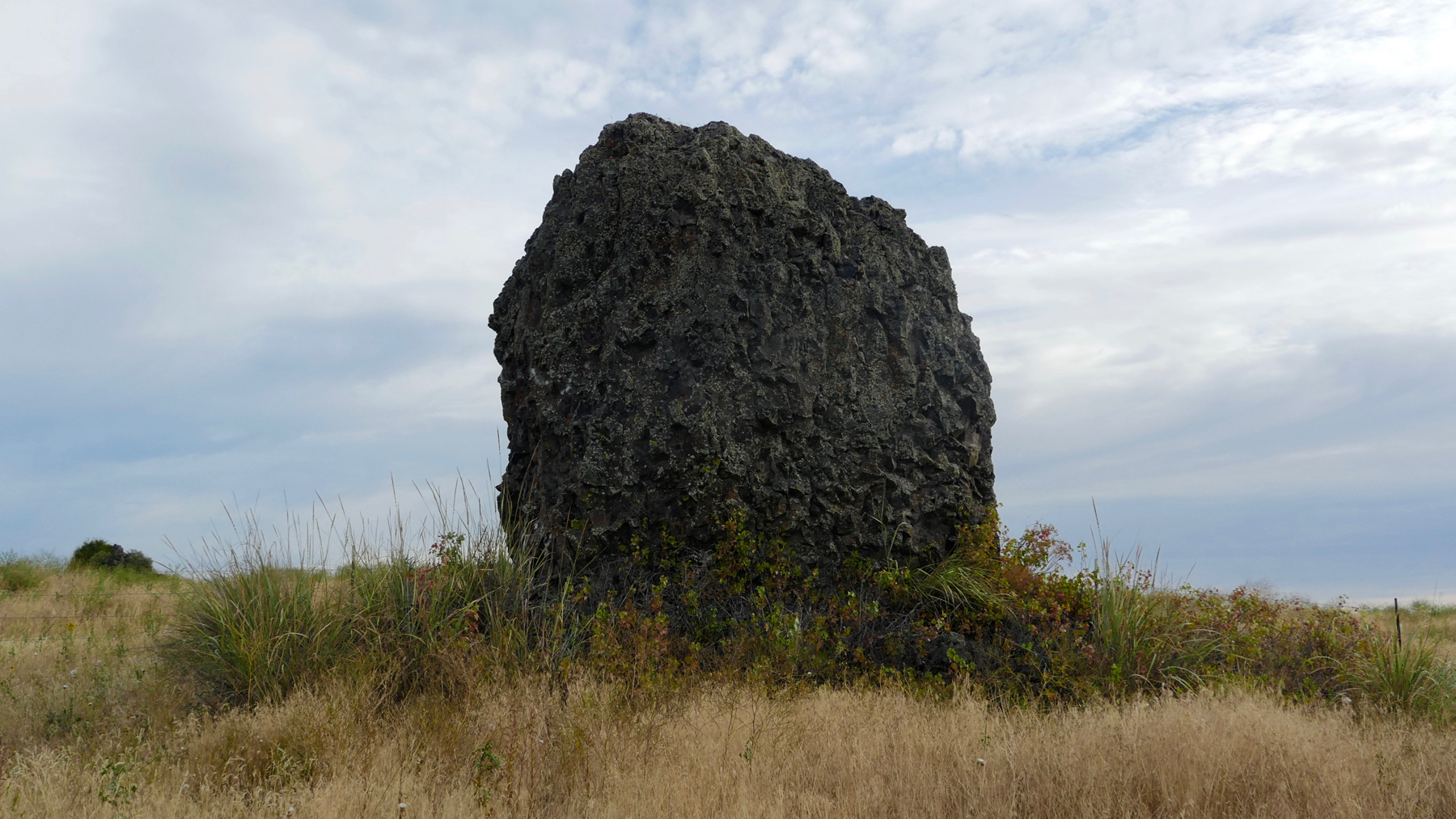 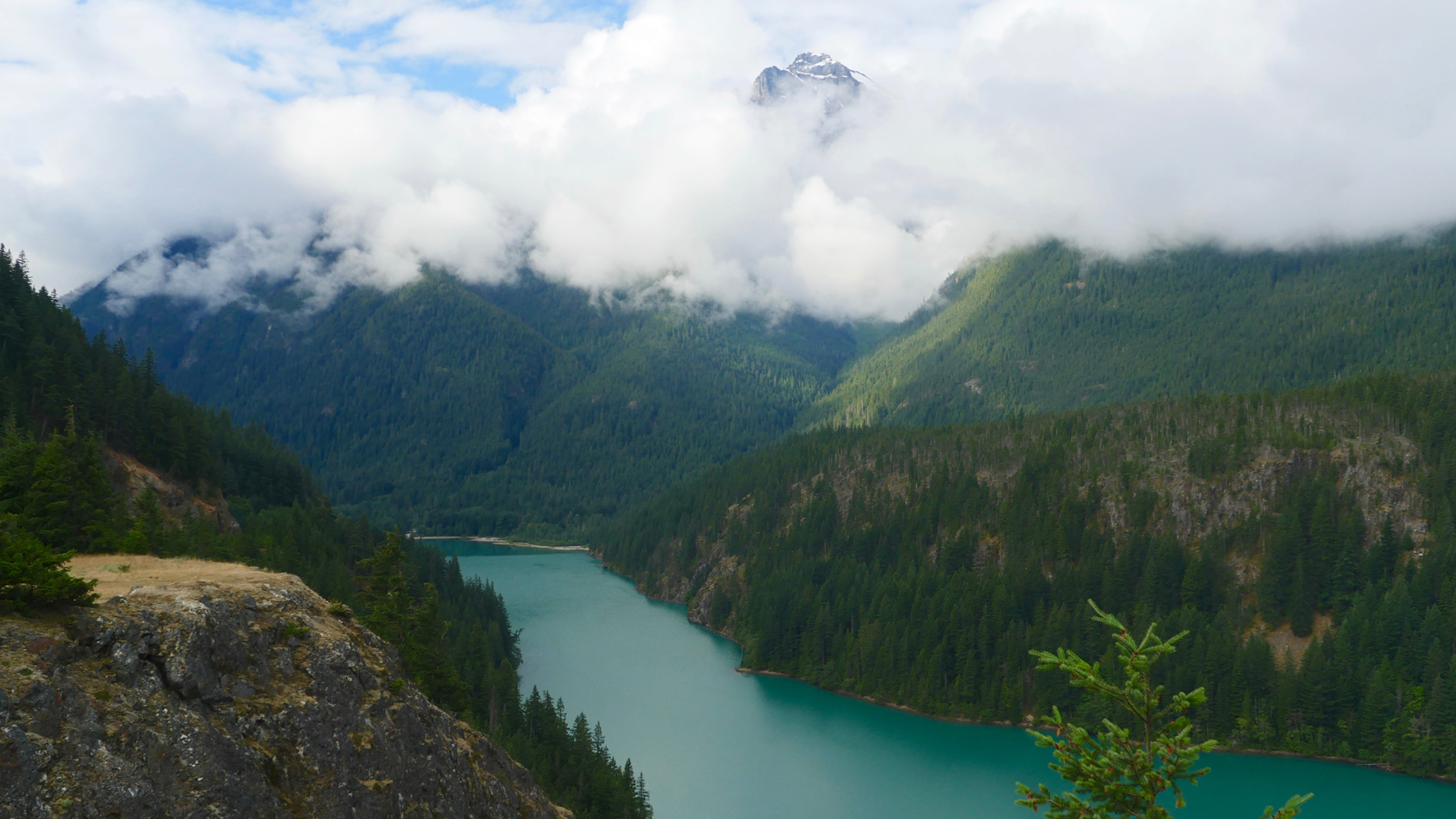 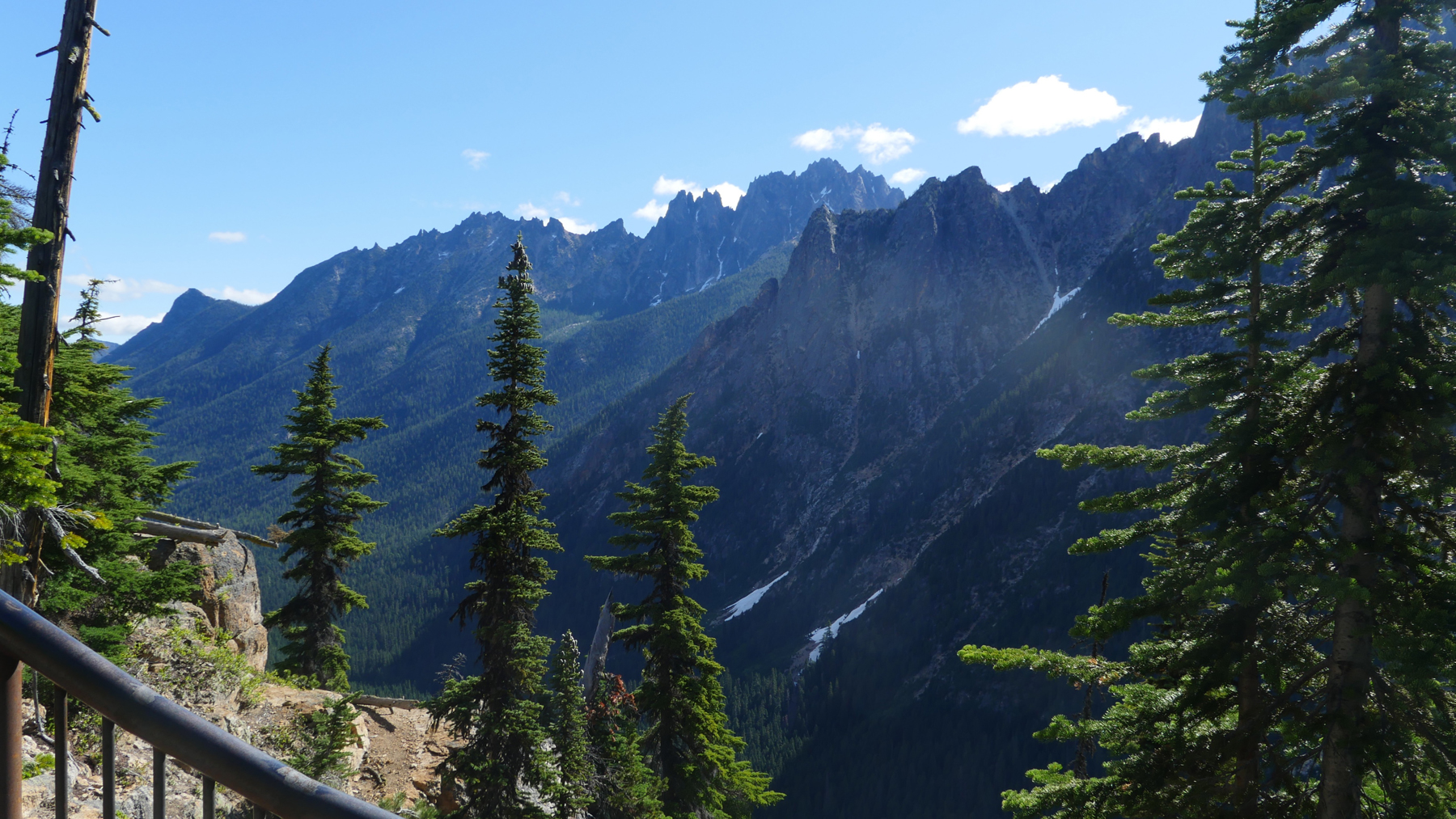 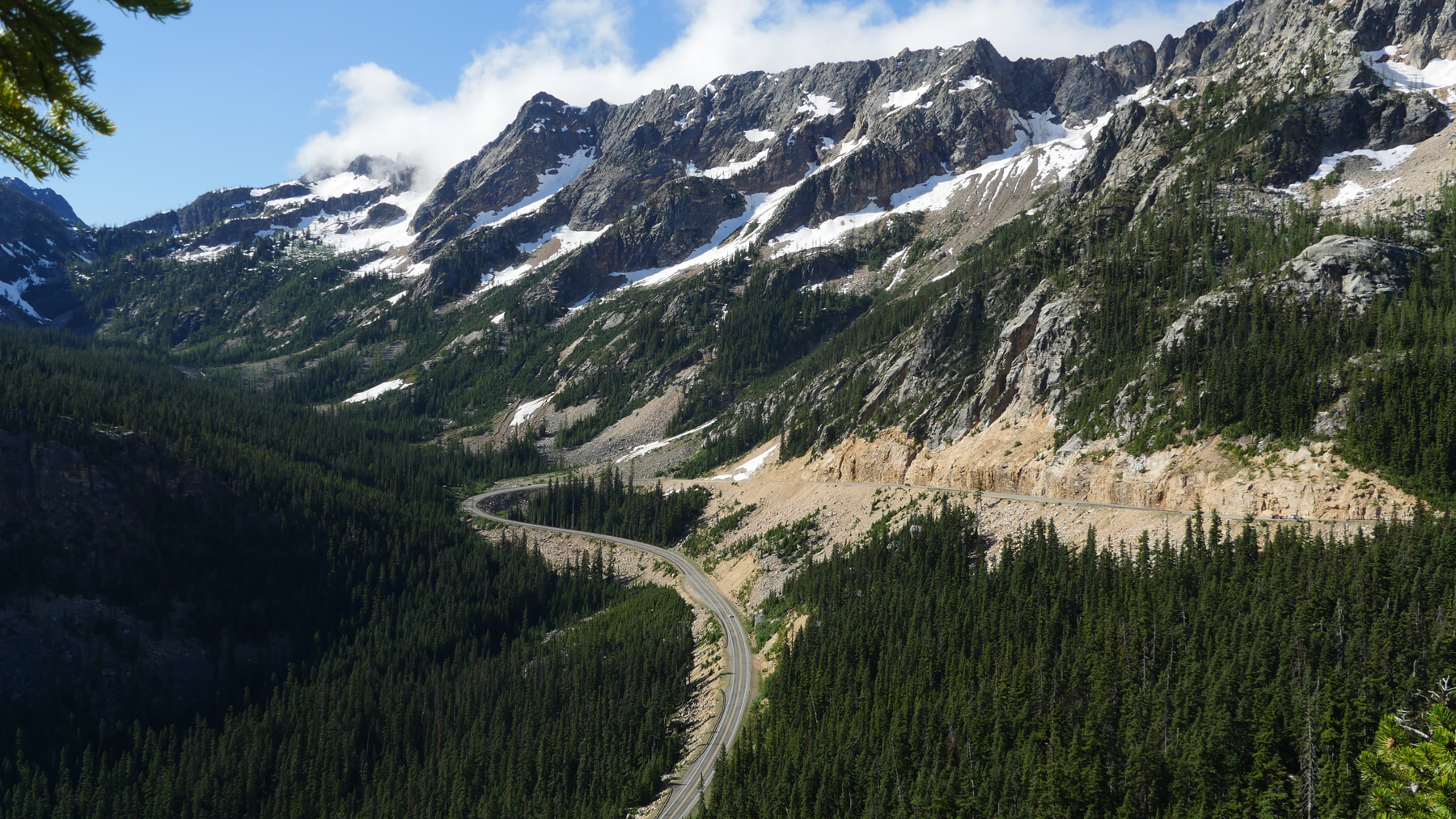 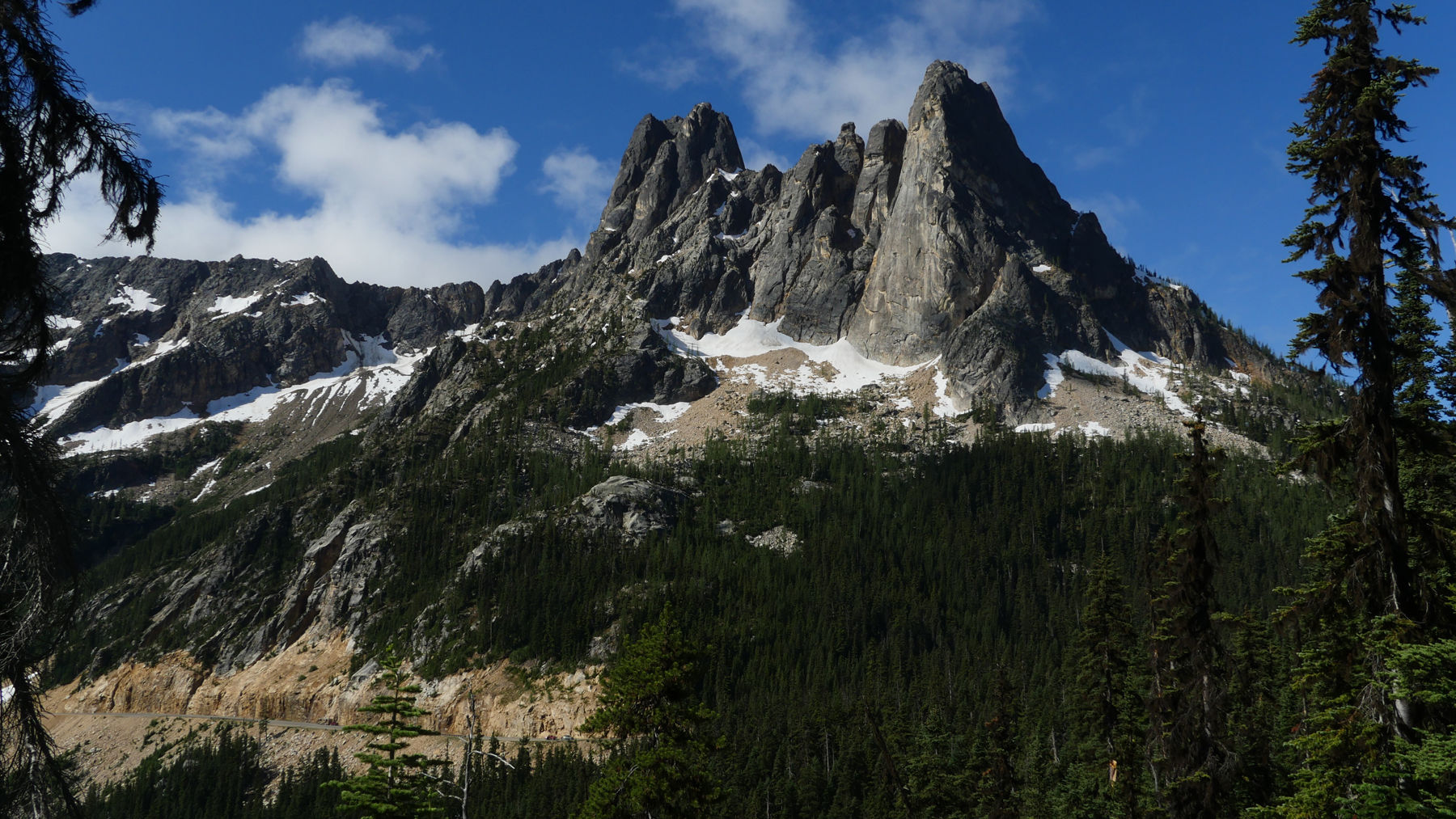 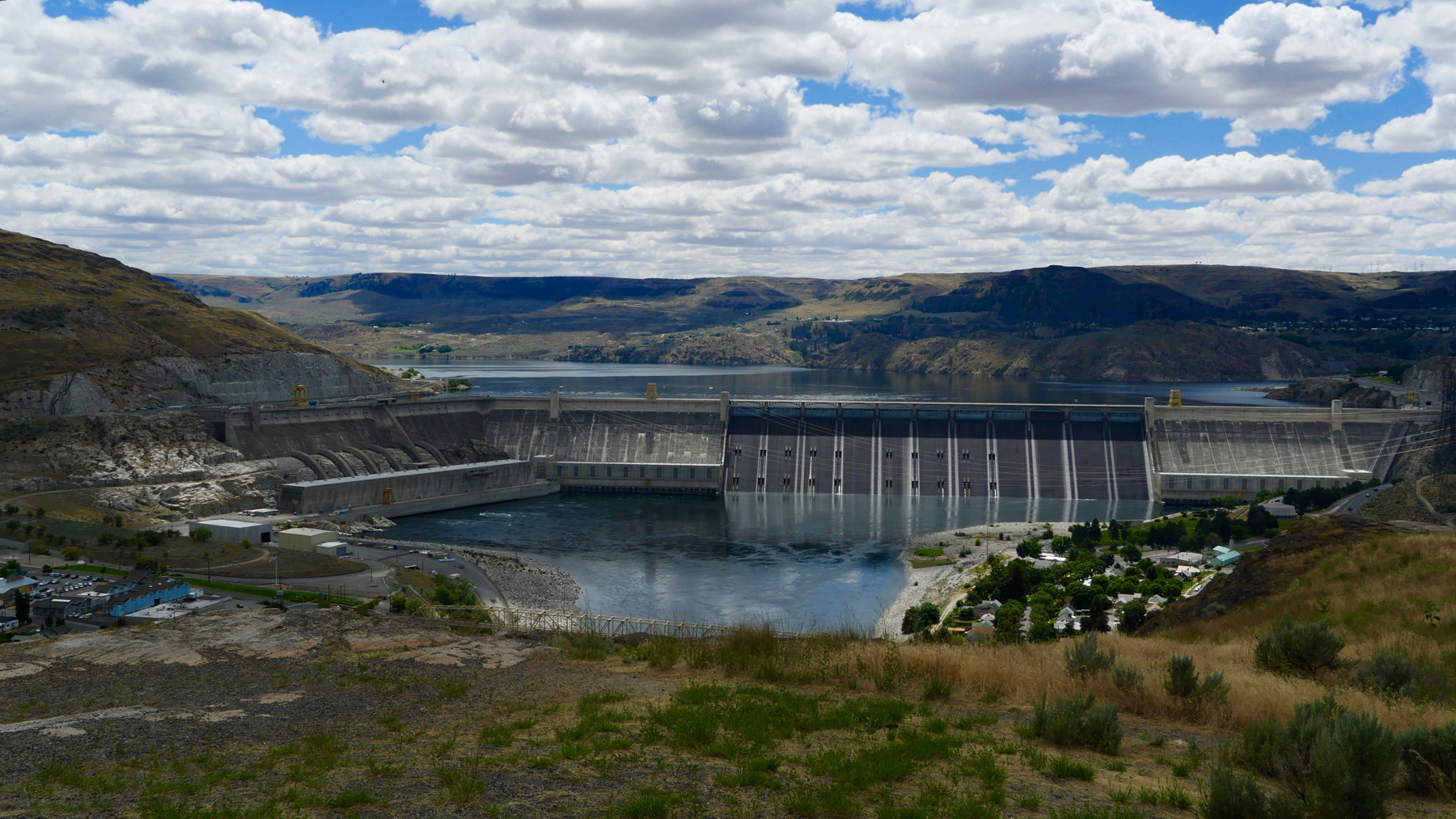 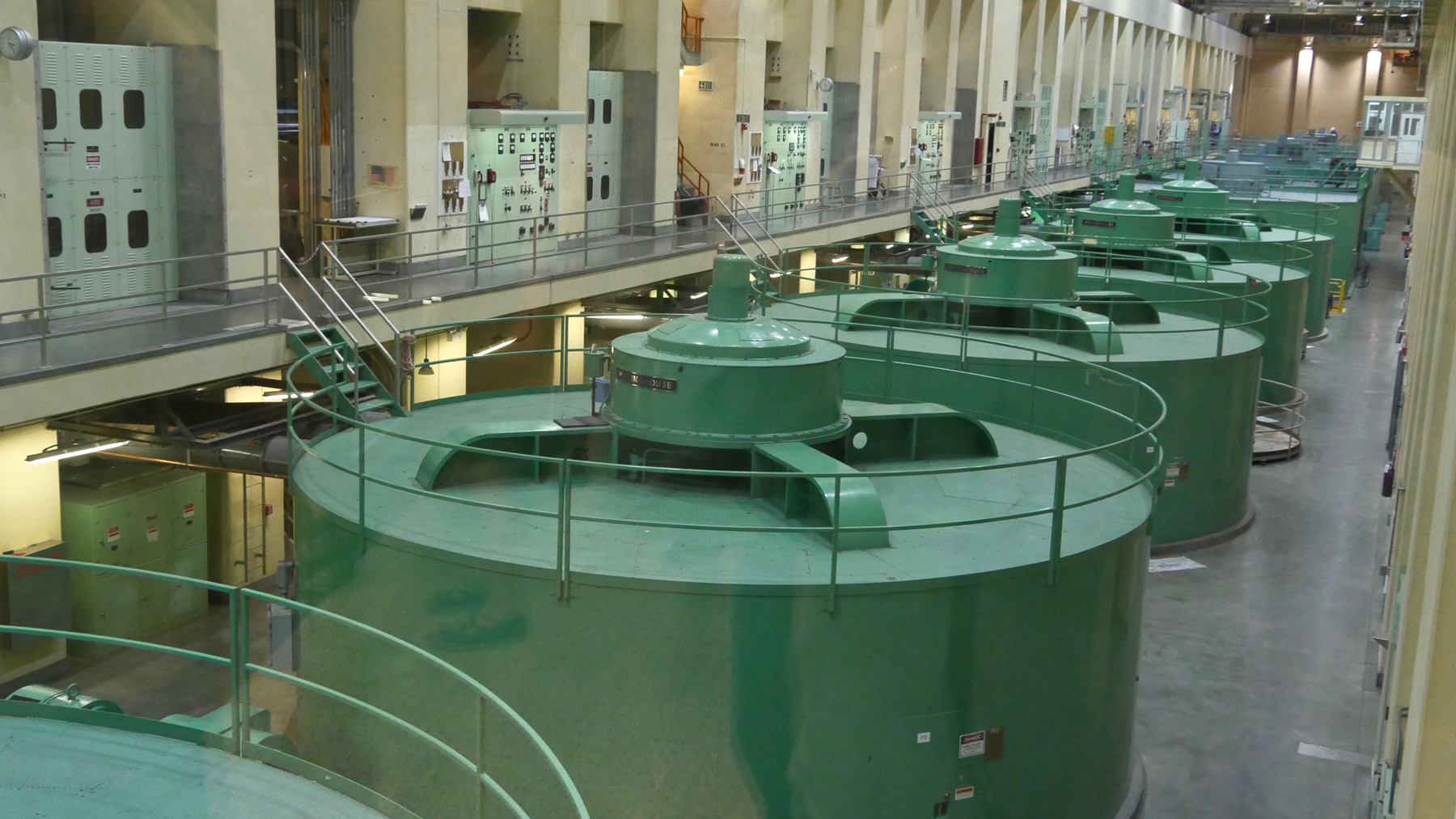 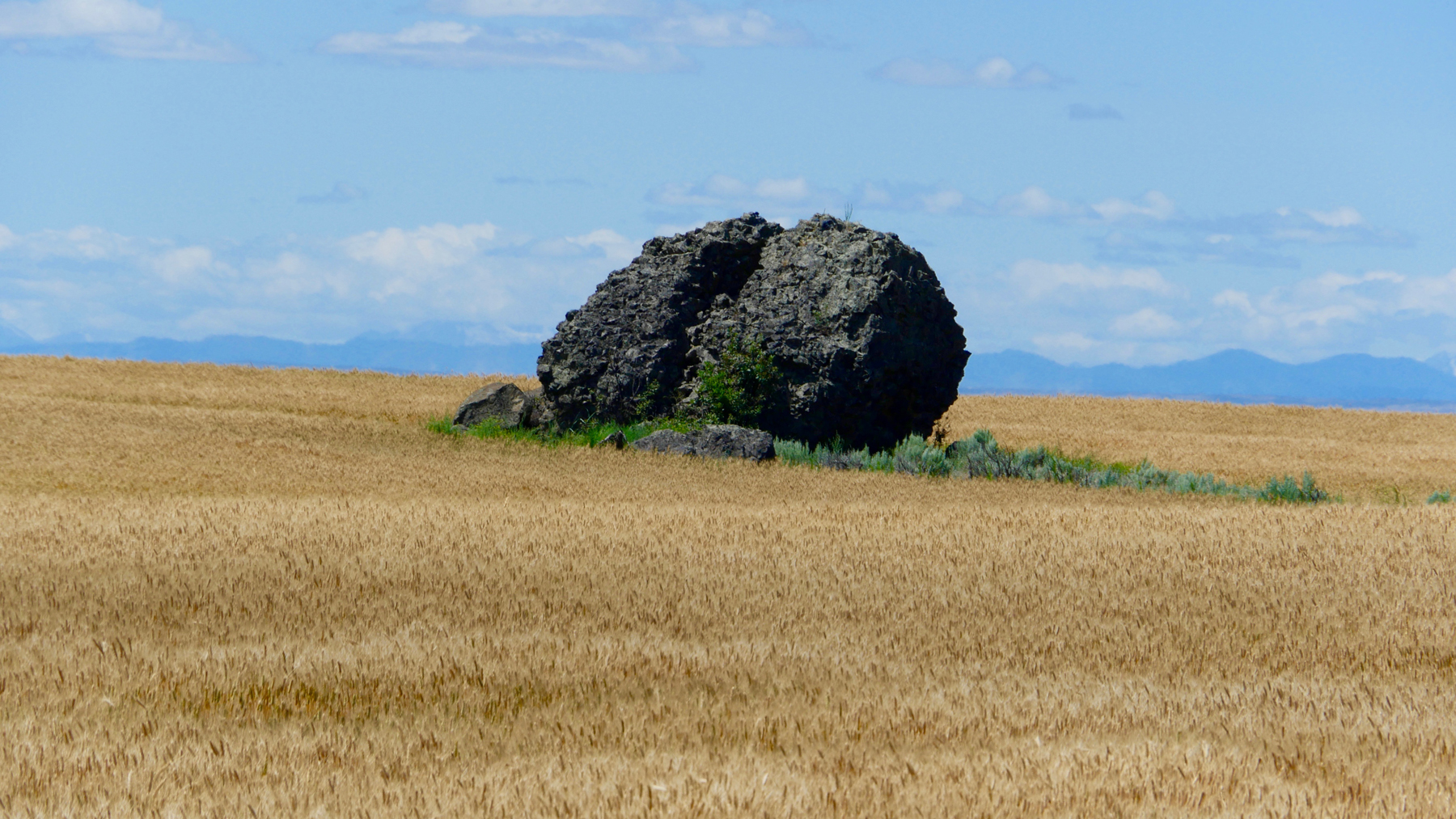 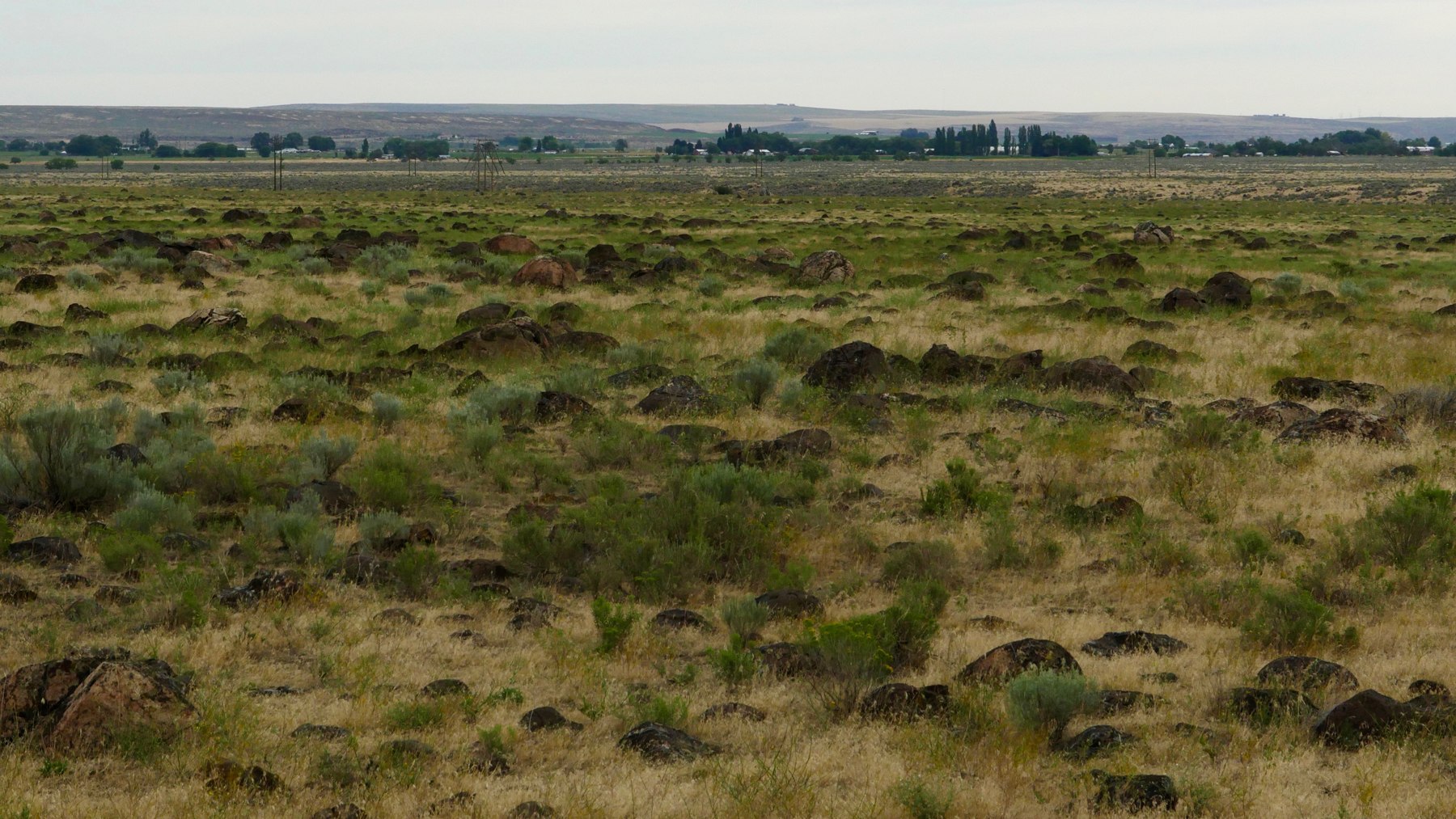 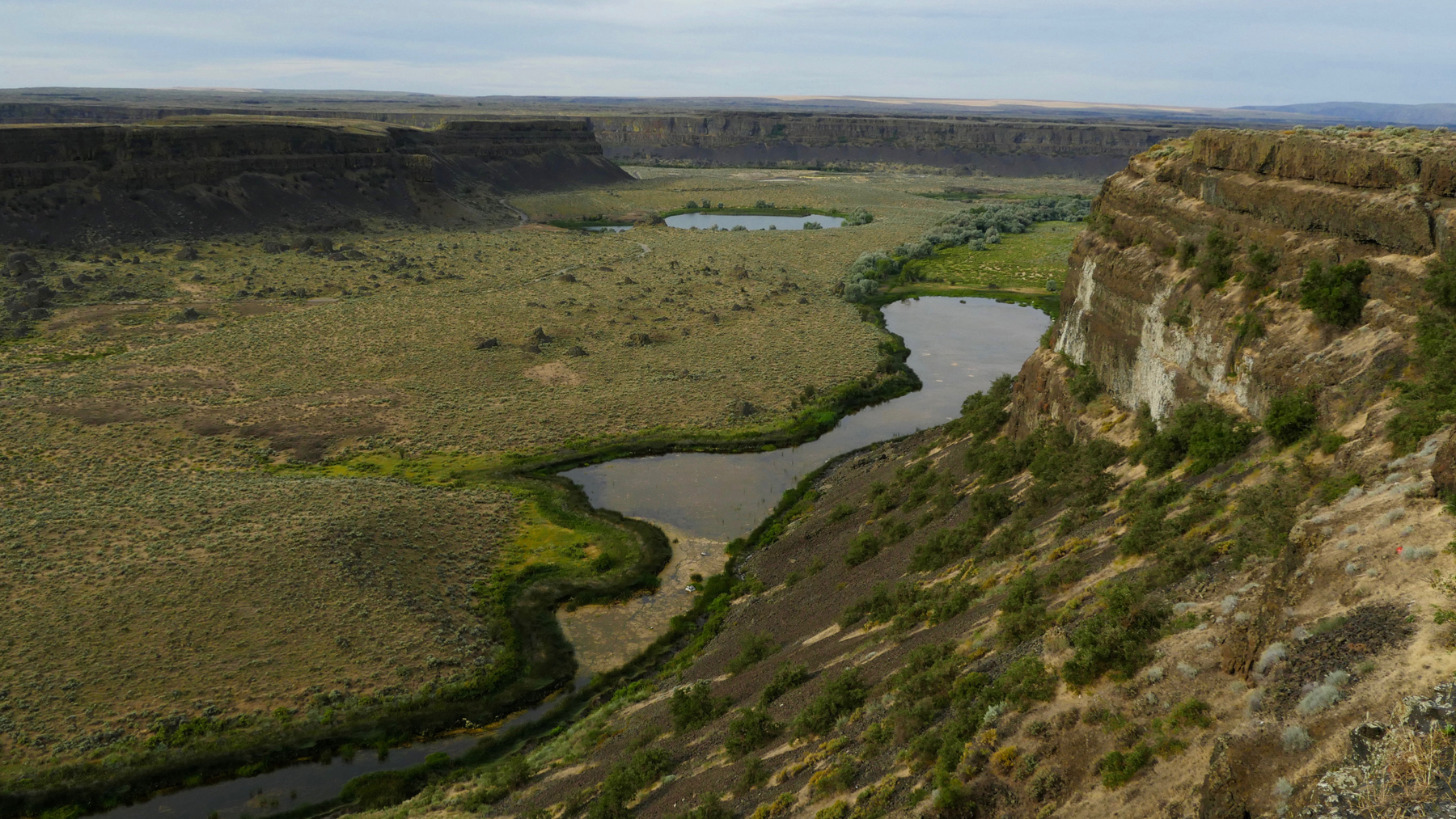 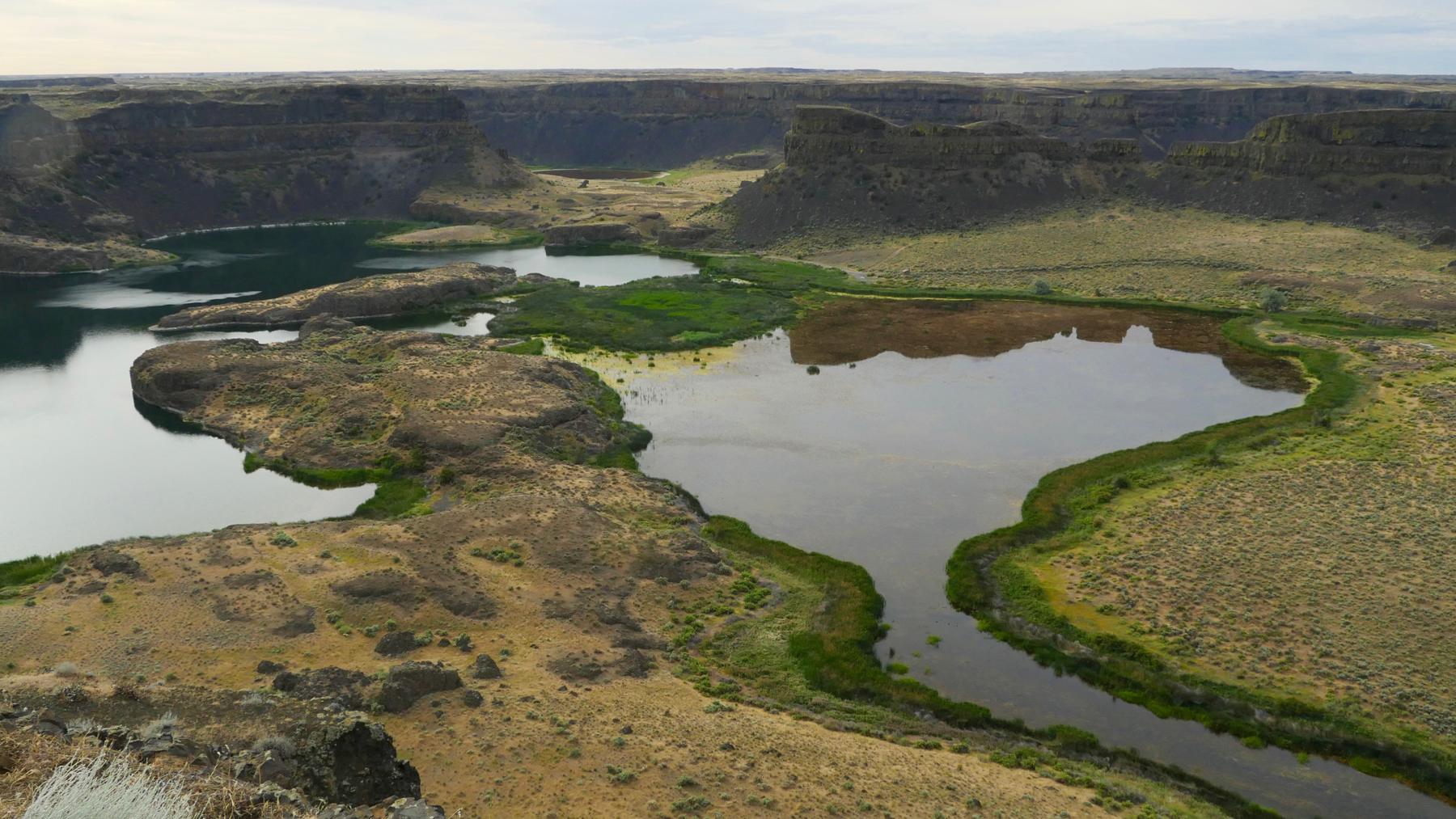 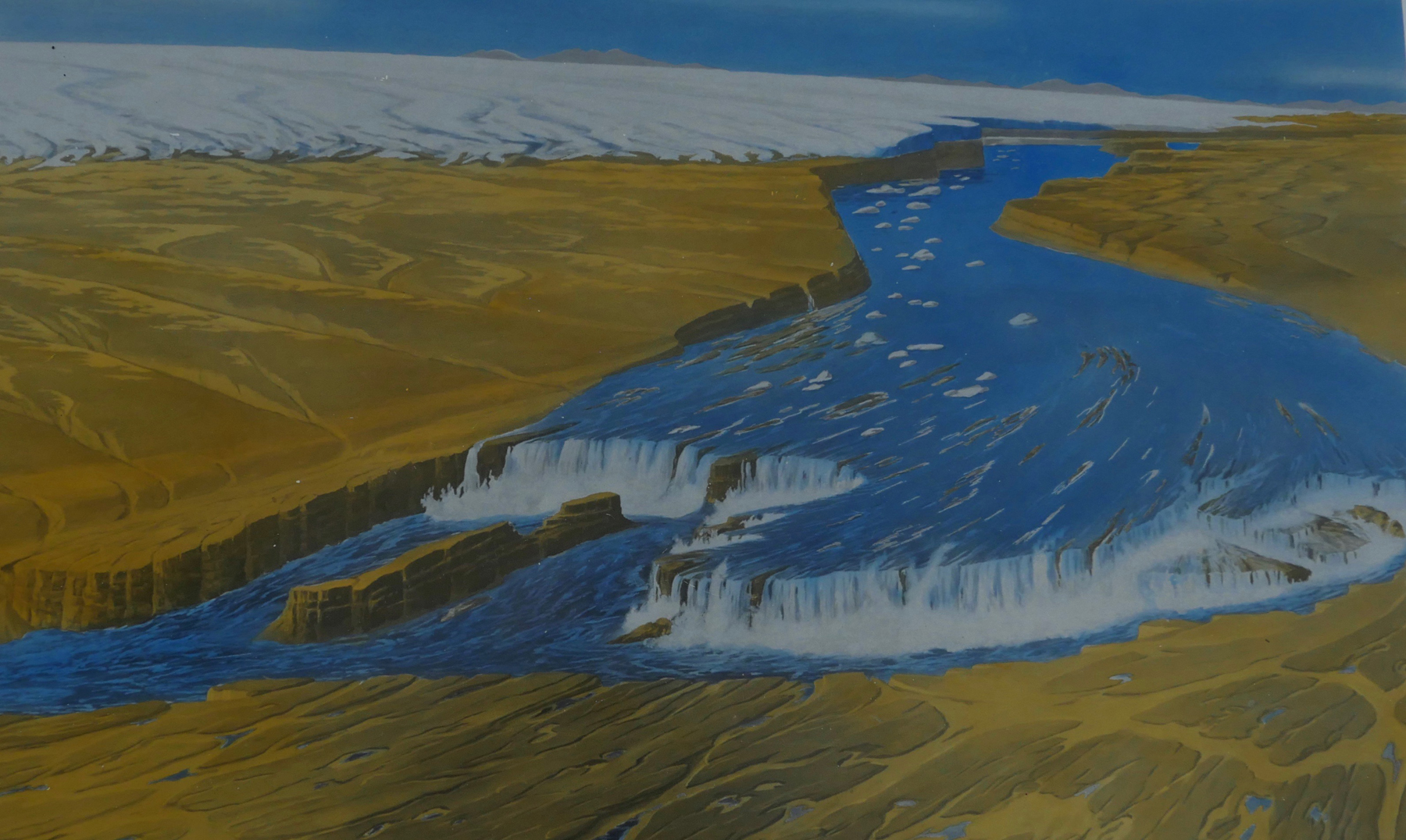 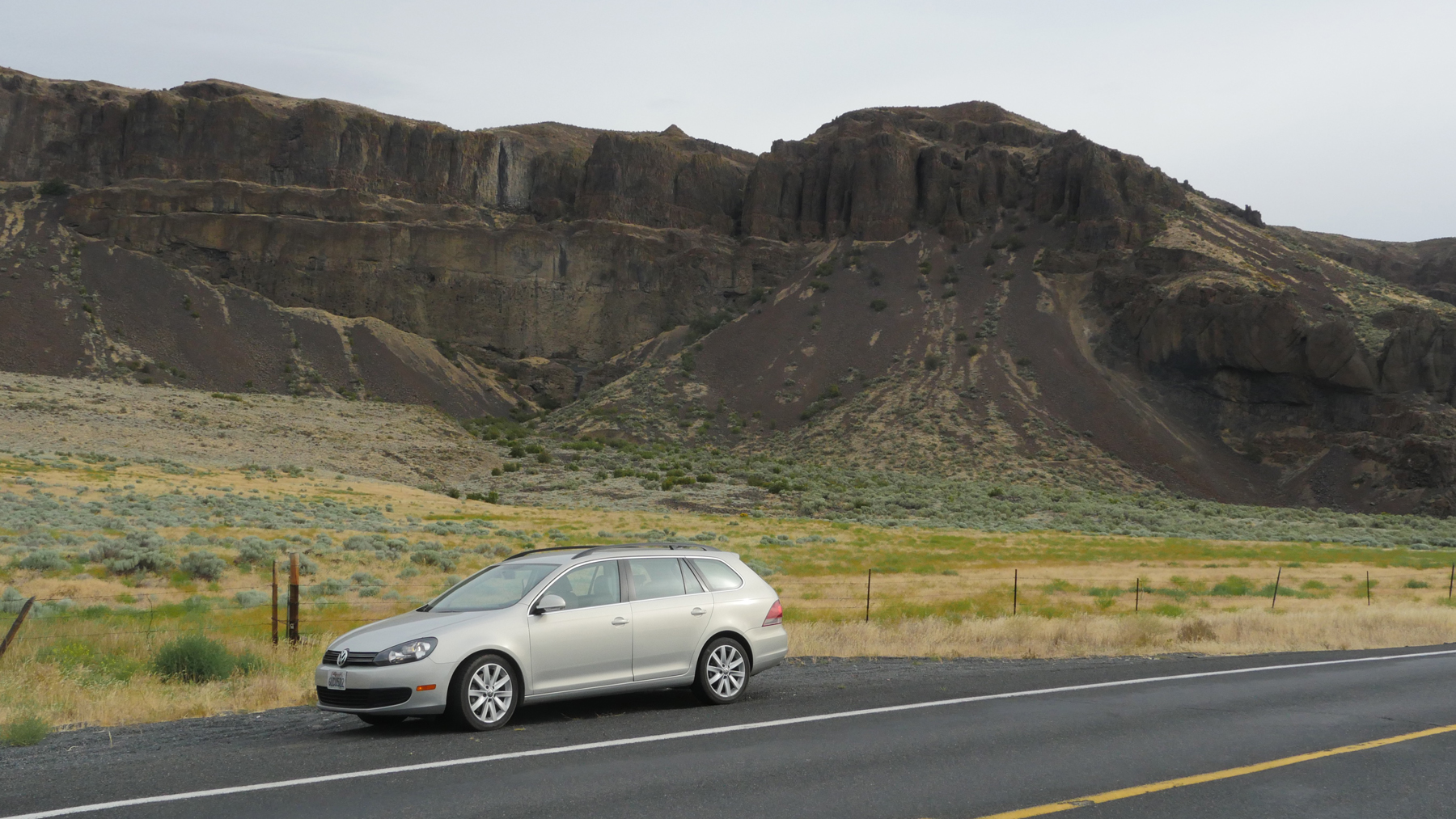 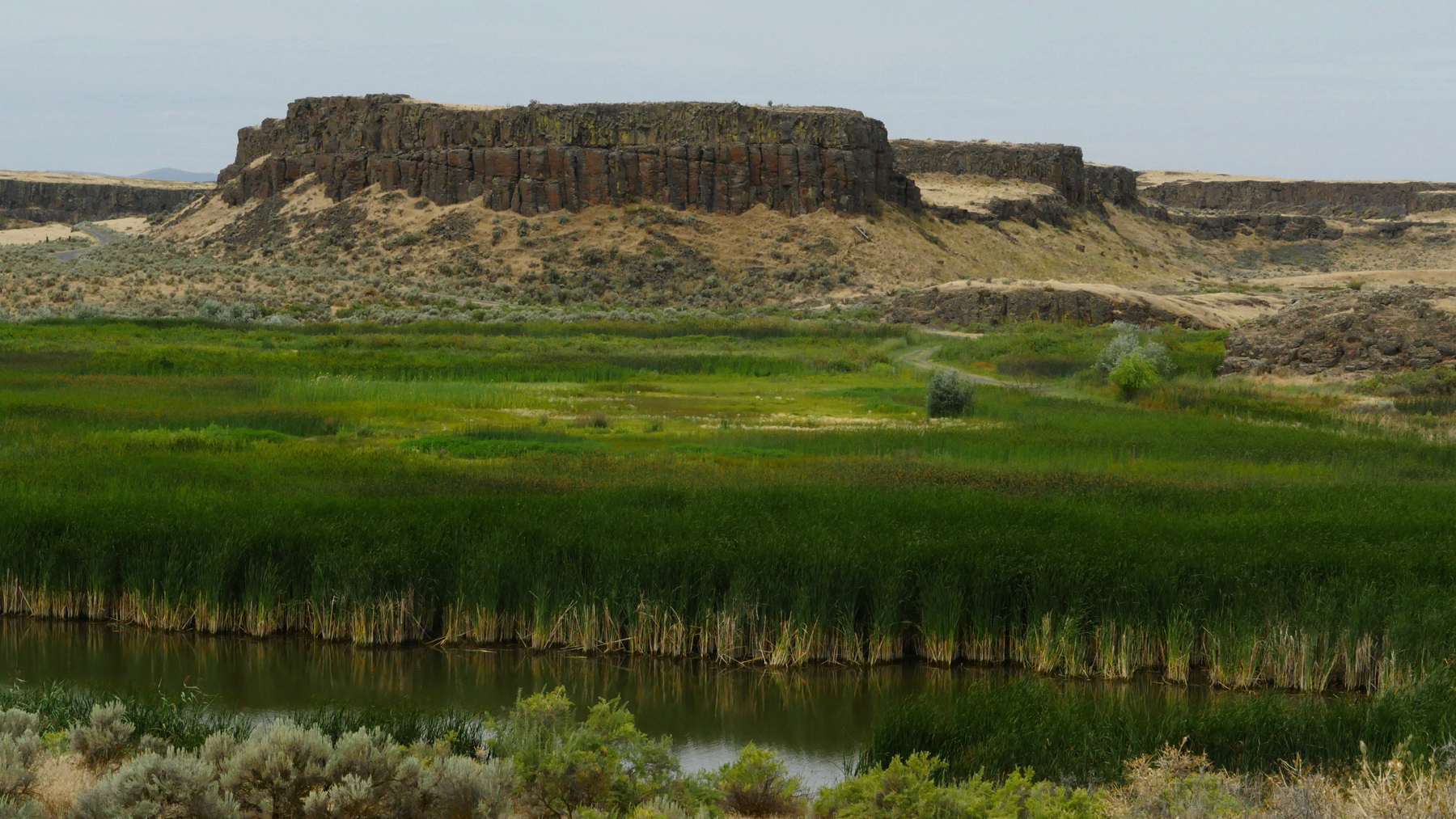 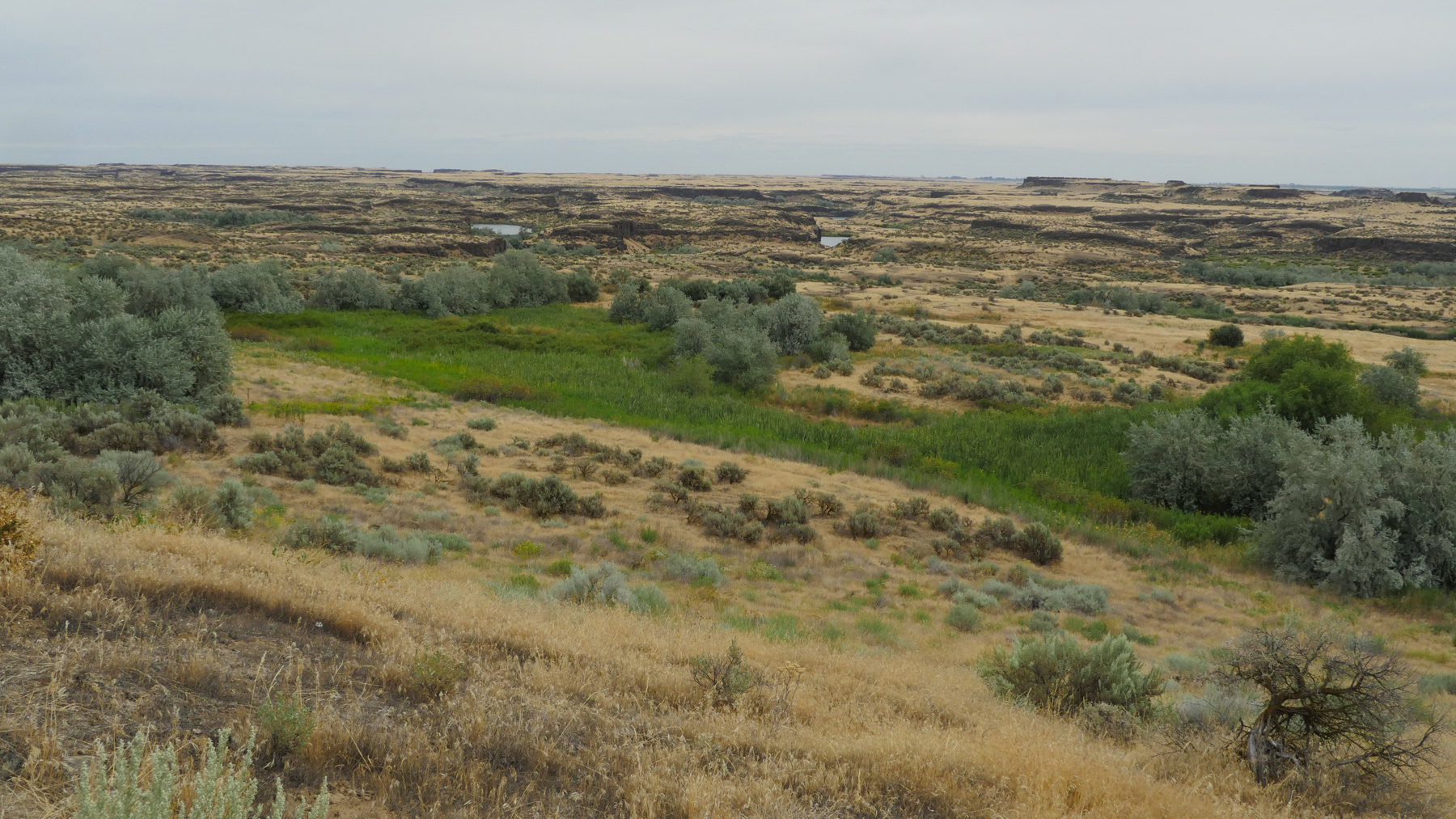 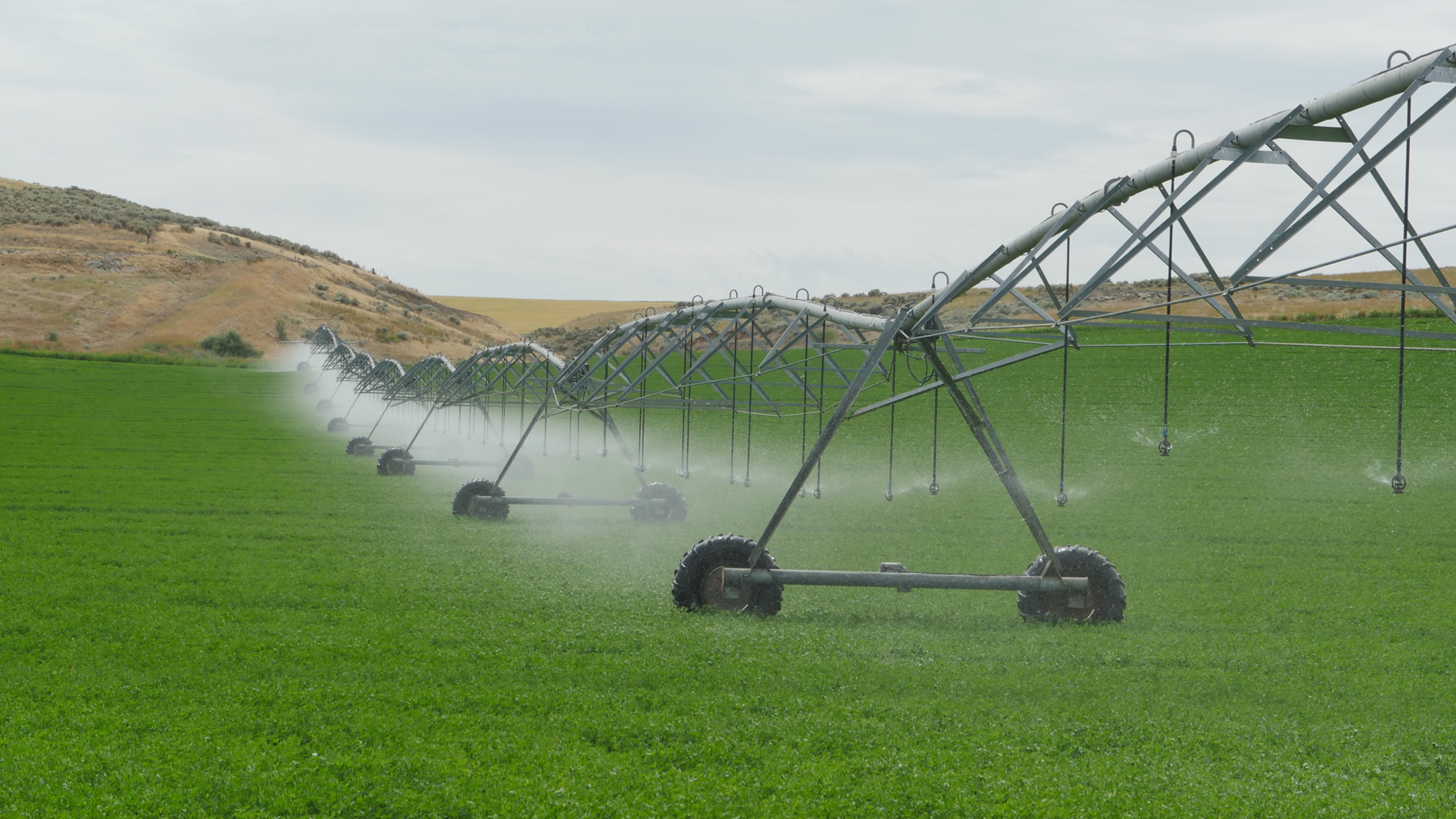 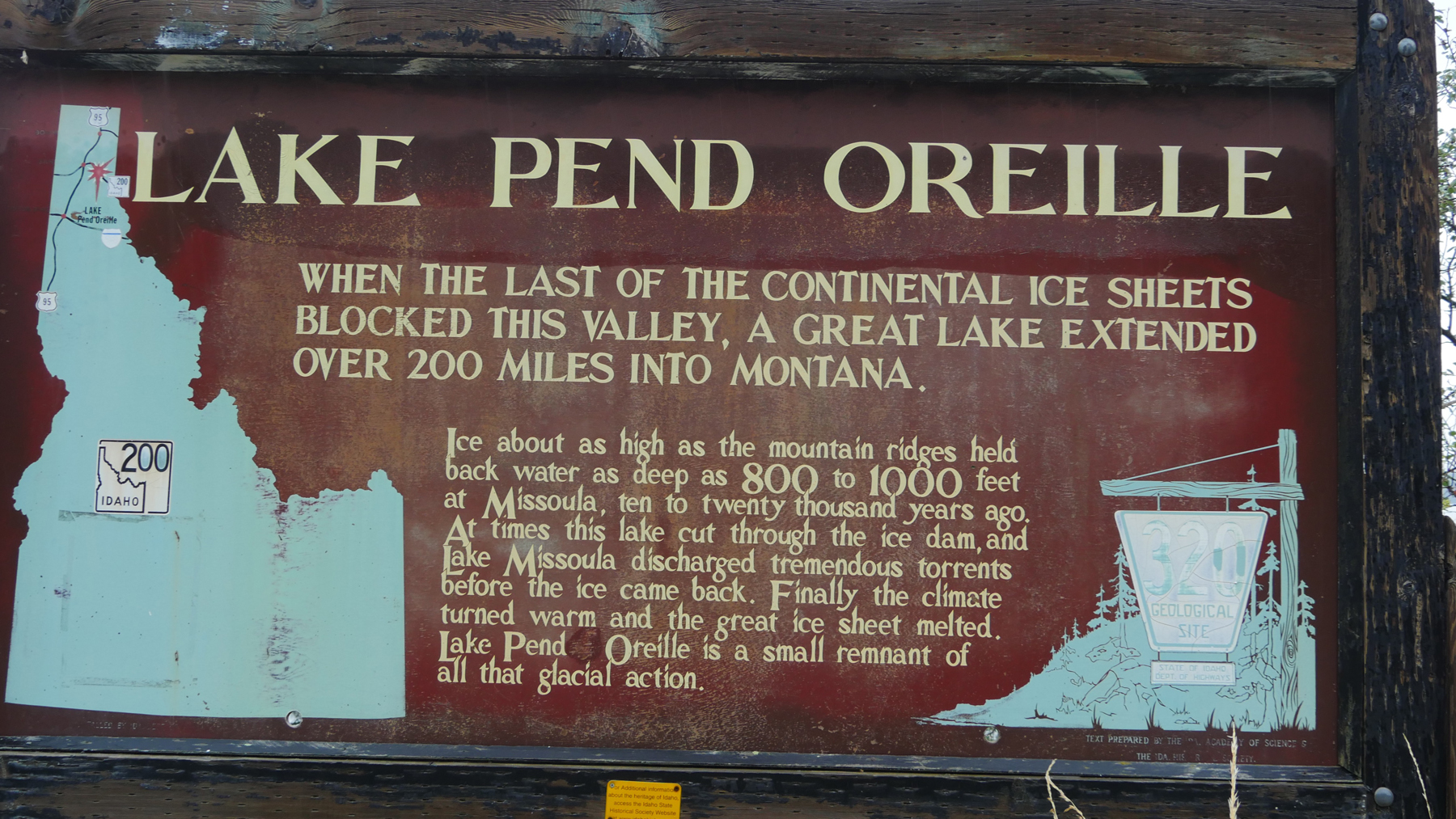 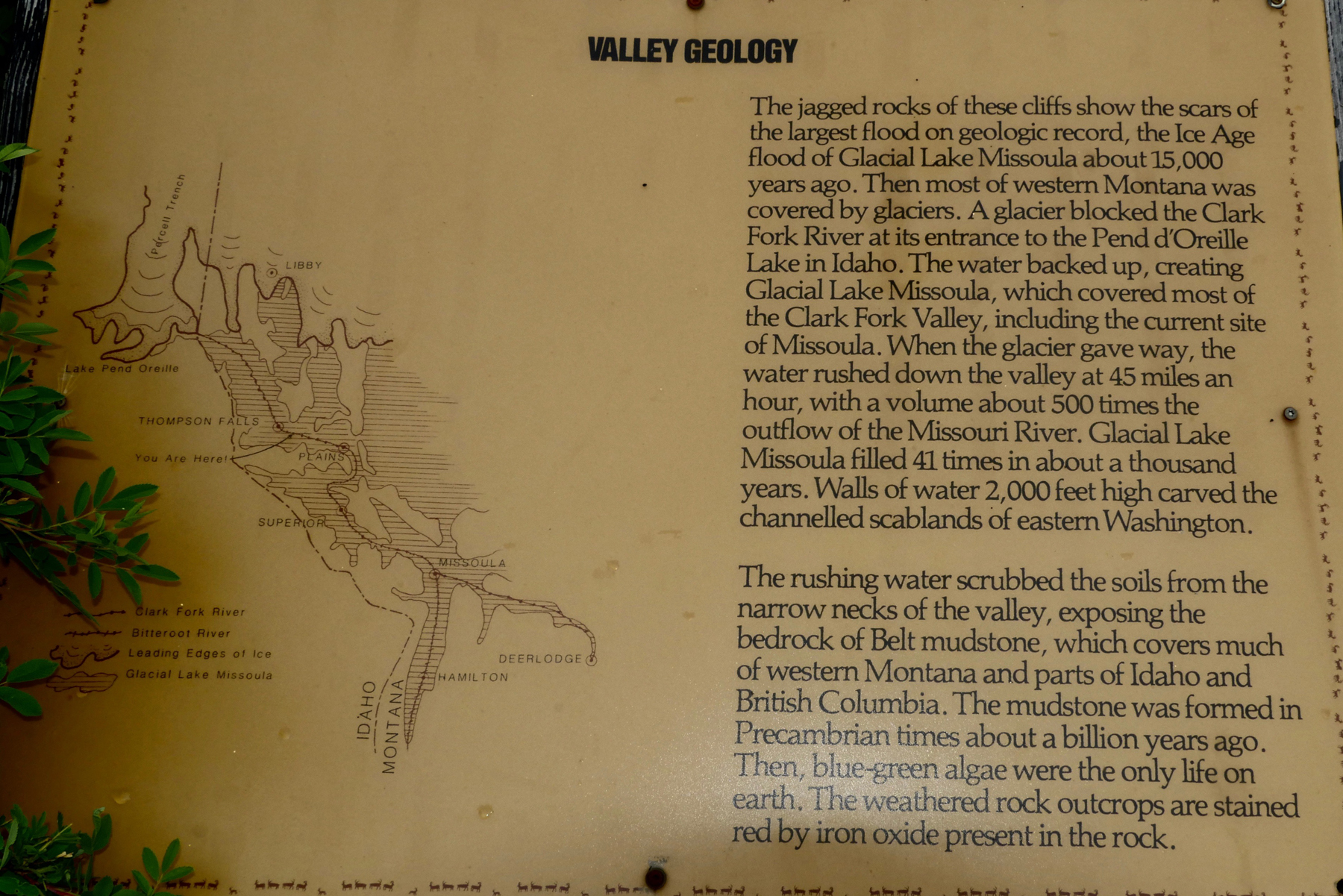 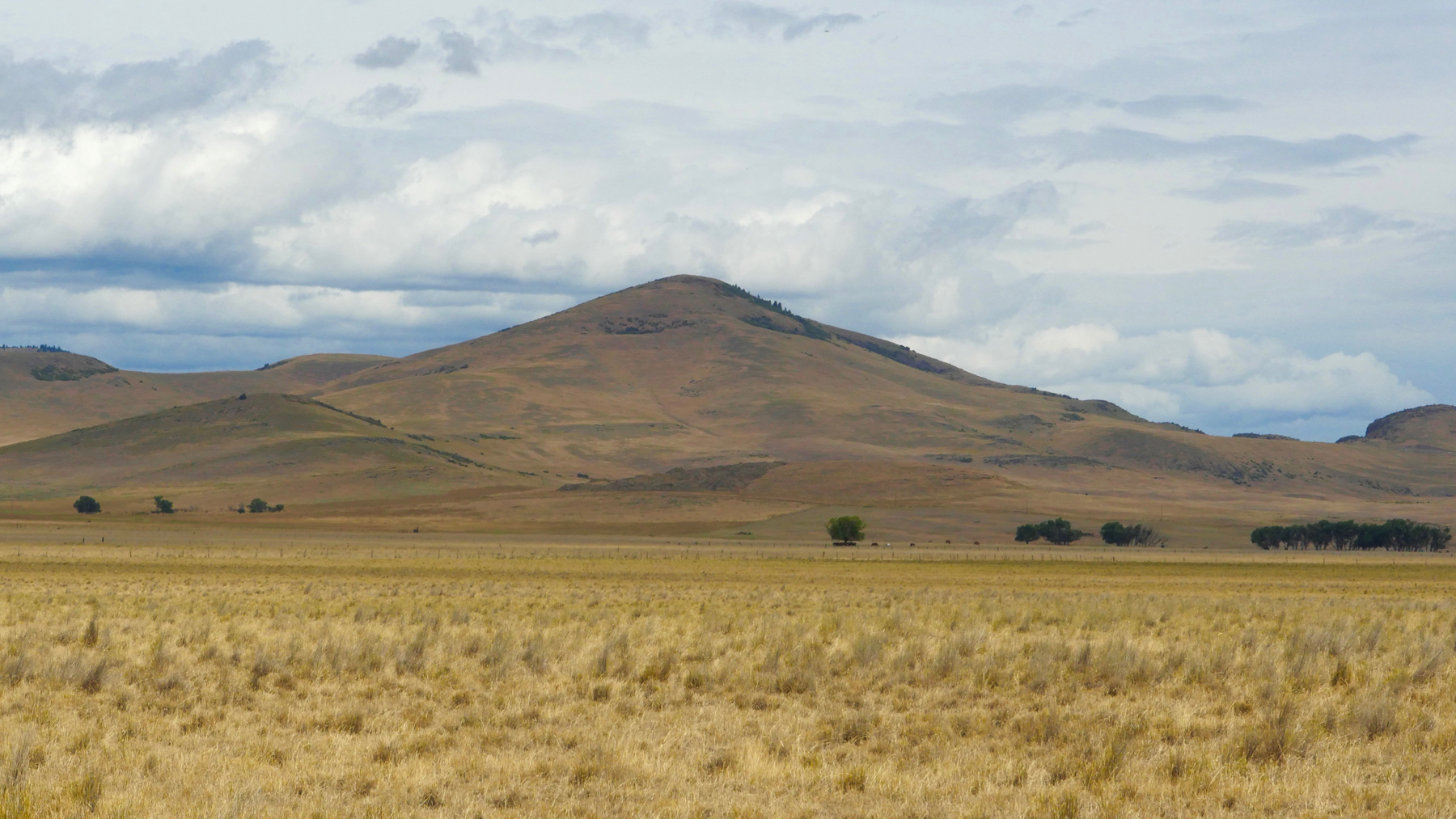 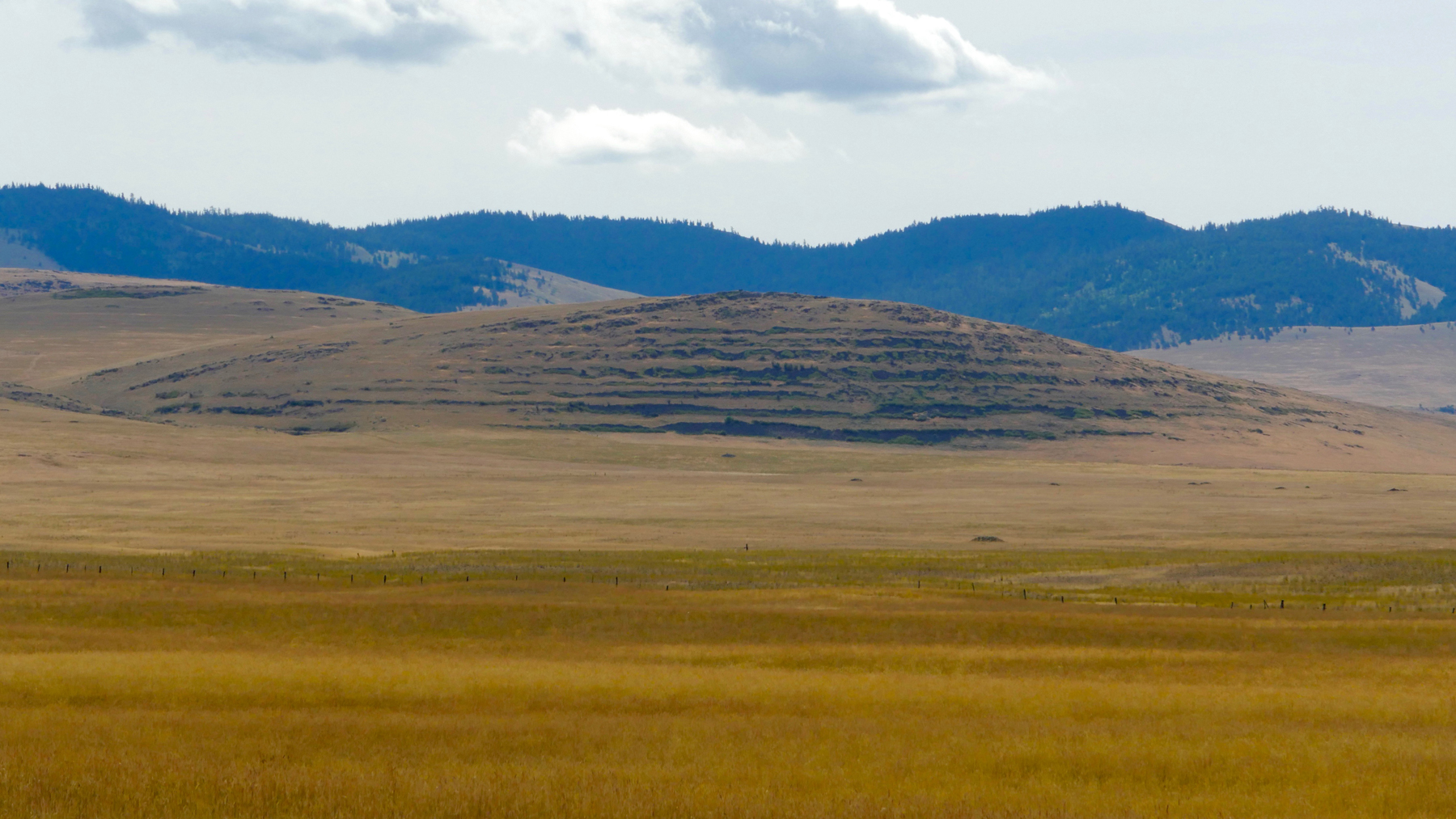 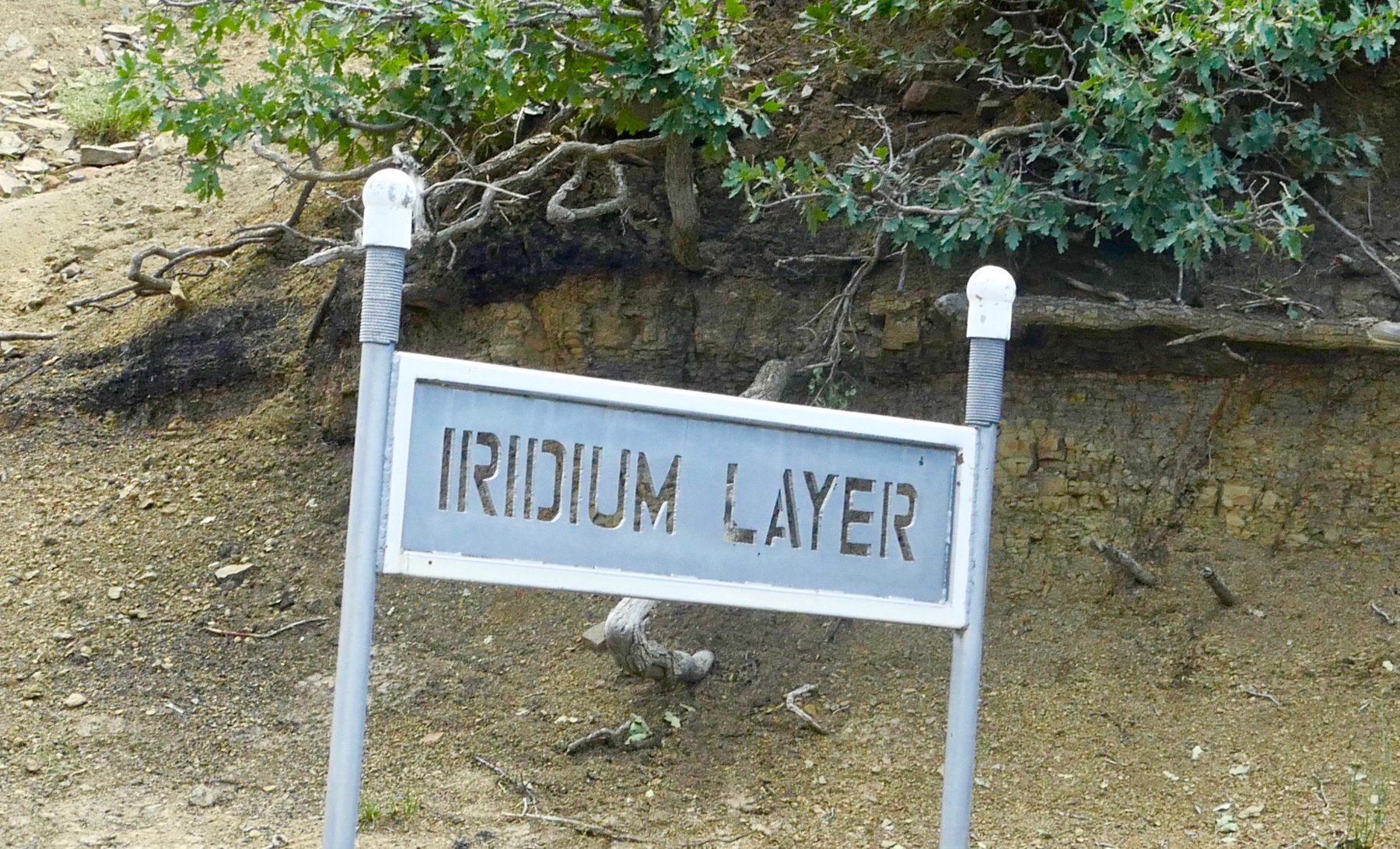 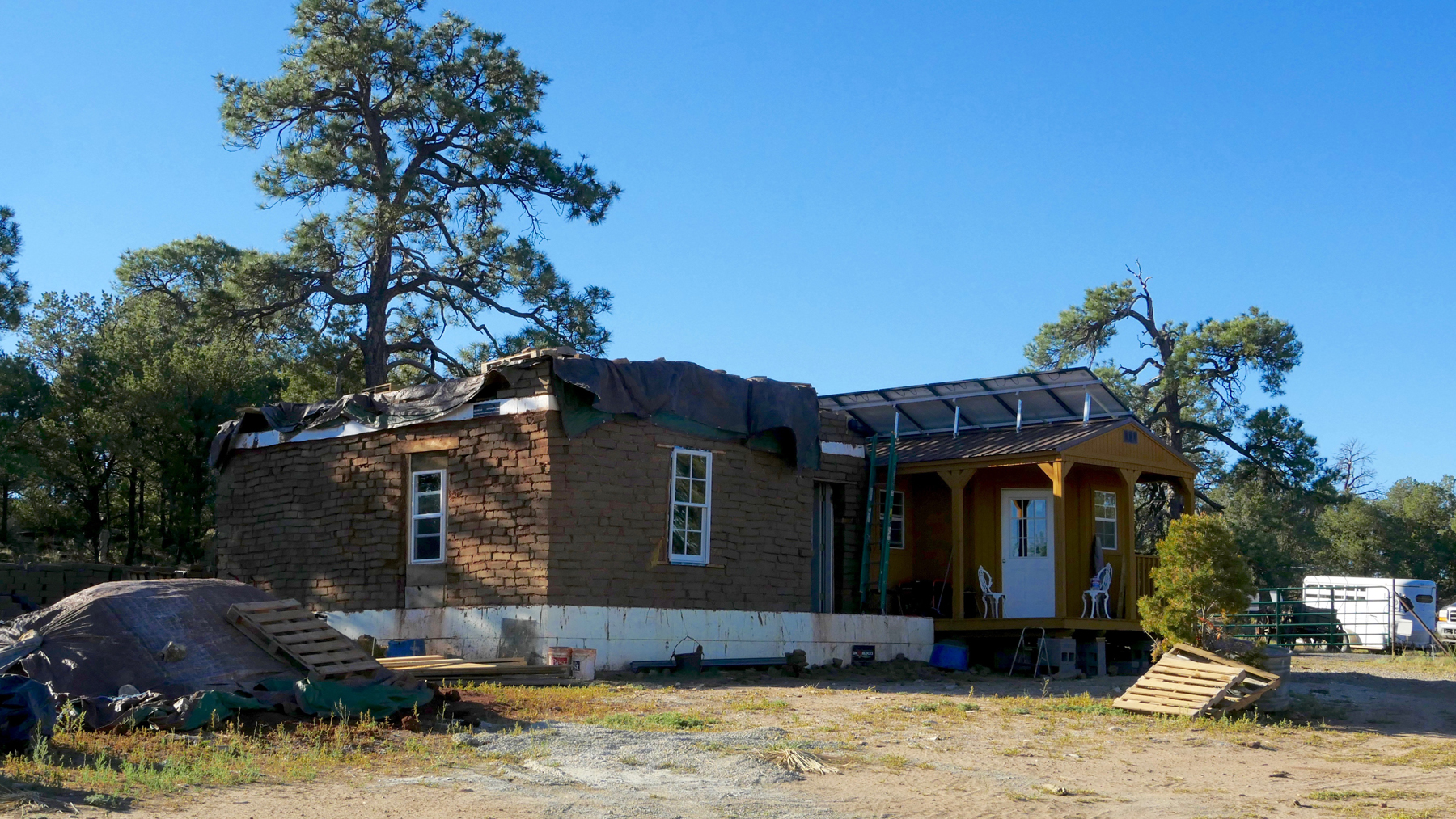 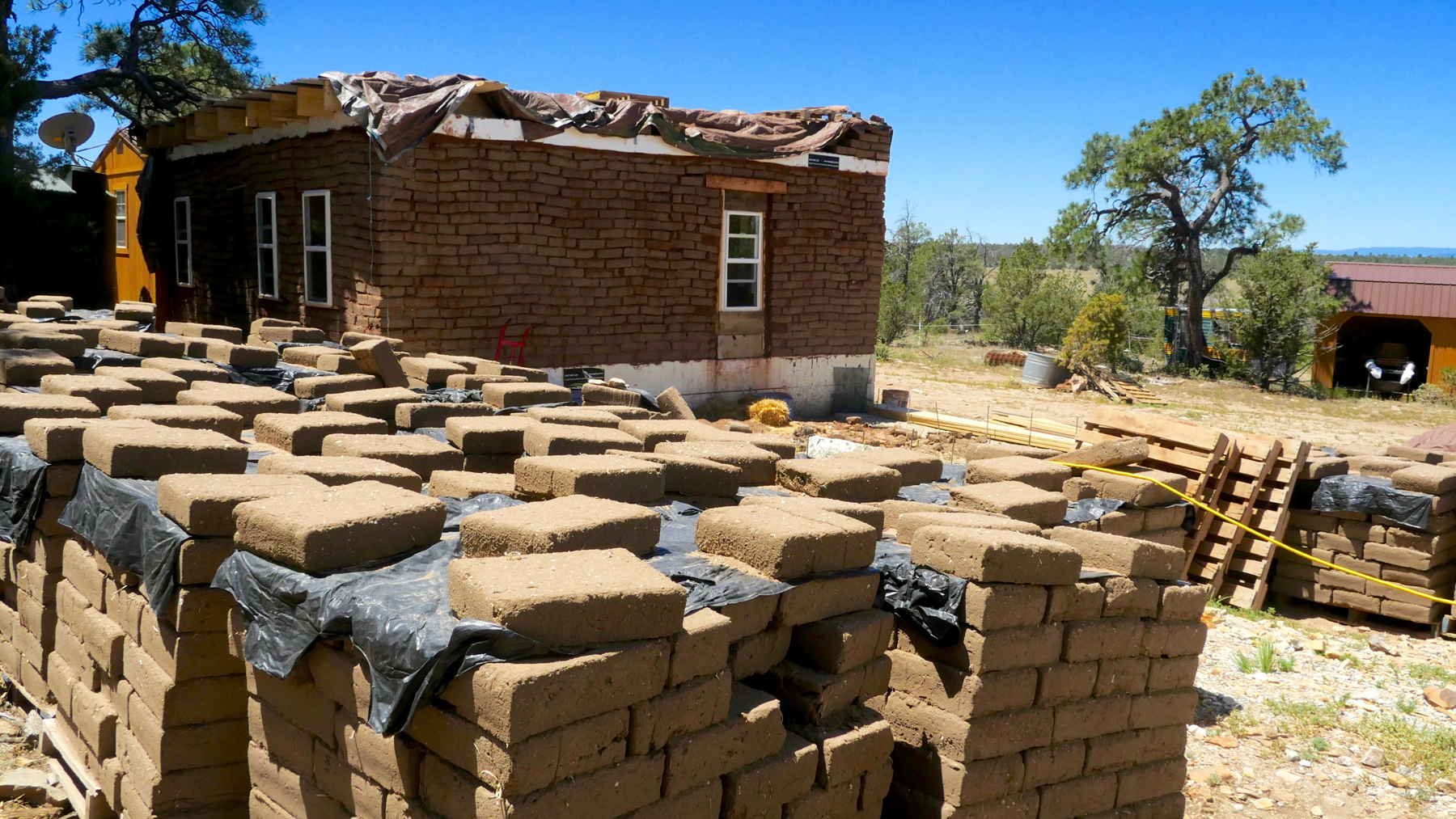 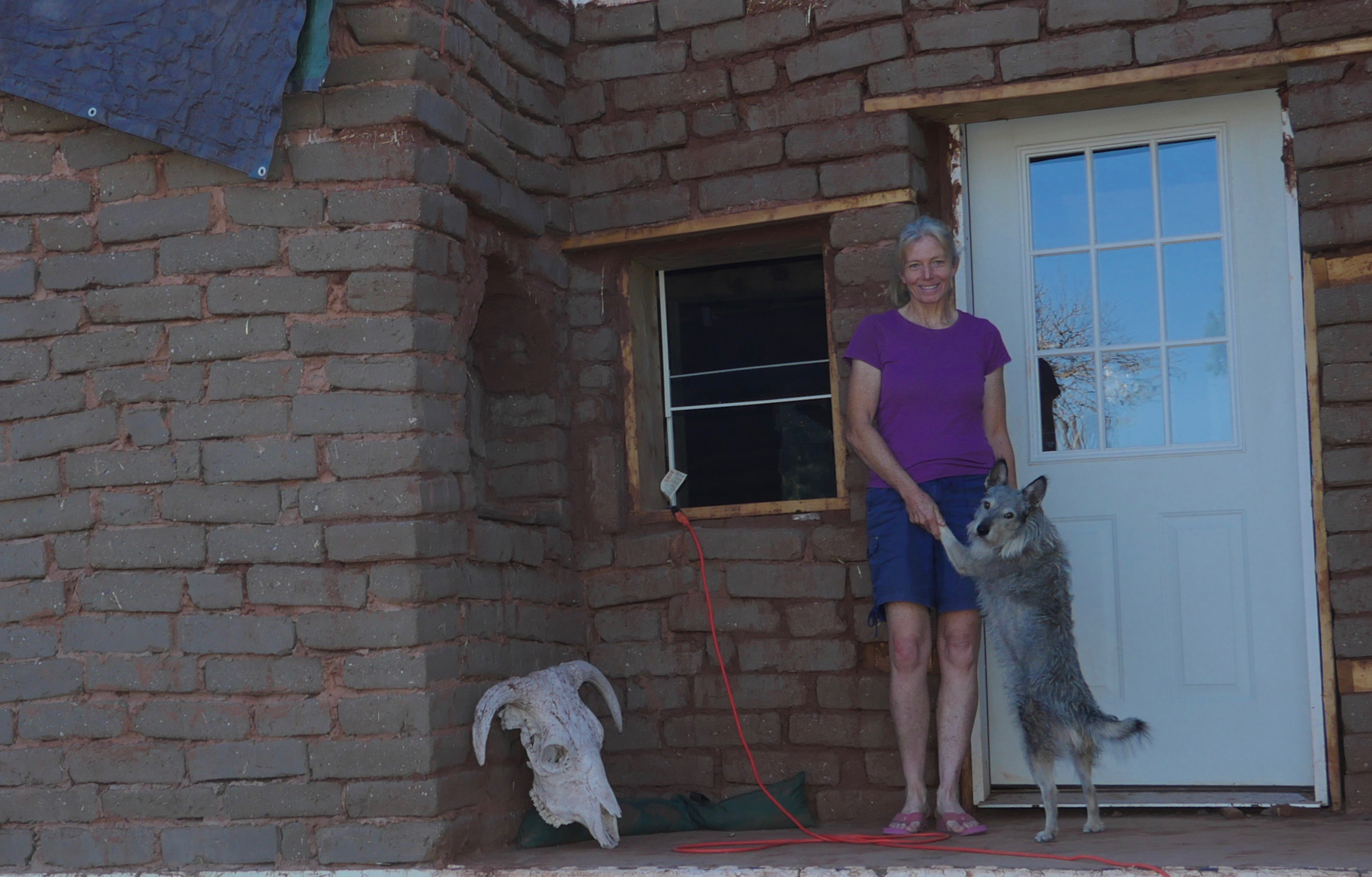 I regularly drive from my home in Southern California to Delta Marine Services on Vancouver Island where Venture spends her winters. This year, at the end of our trip up the rivers, I decided to return home by a roundabout route which would allow me to look at some more of the evidence of the cataclysmic floods that swept over the land on multiple occasions between 15,000 and 18,000 years ago. After taking the ferry from Sidney to Anacortes, I took route 20 due east through the Cascade mountains and some stunning scenery. The road and railway followed the route the rivers which had carved their way through these rugged mountains. The flow of many of these rivers is now constrained by dams. I arrived at Grand Coulee dam in the early afternoon. The dam was the first to be built on the Columbia and it is huge.

I took a tour of this gravity dam - meaning that it holds back the water by purely by its weight. Until the building of the three gorges dam on the Yangtze in China, it was the largest concrete structure in the world. I took the free tour which, compared to the tour of the Bonneville dam, was, frankly, a waste of time. The guide fancied himself as a stand up comic; security is onerous and mirrors that of an airport including having to remove your belt etc and the tour showed us very little. The one thing of interest we did see was the series of 65,000 hp, electrically driven pumps which raise water from the dam 500 ft to irrigate most of Eastern Washington.

In 2008, I had been lucky enough to watch the amazing light show in Quebec which, with surround sound and images projected onto grain silos one mile in length, celebrated that city's 400th anniversary. This provided a benchmark against which to judge and regrettably, the 10 pm laser show on the face of the Grand Coolee was, in my opinion, not worth staying up for. The following day I drove south to follow one of several suggested routes to view the flood evidence. The books show photos of large erratic boulders discarded along the route, intimating that these are rare examples when, in fact, it turns out that they are ubiquitous and, in places, there are literally fields of smaller rocks. I stopped at a site overlooking the dramatic "Dry Falls" which, at the time of the mega floods, had been the site of the largest falls in the world. I saw what are called the "scablands".

These include numerous "potholes" created by a powerful underwater vortices of exploding bubbles which gouge huge chunks out of the fractured basalt bedrock after all the overlying earth has been swept away. From here I drove northeast, past Spokane, to Sandpoint not far from the Canadian border. This is close to the point where the tongue from an ice-age glacier blocked what is now the Clark Fork River to create a glacial lake, 2100 ft deep, containing an estimated 530 cubic miles of water. From Sandpoint I followed the valley of the Clark Fork River with views over current Lake Pend d'Oreille - a modern mini version of the glacial lake today created by several dams along the Clark Fork River. It had been over 100 degrees at Grand Coolee but here it was misty with rain and much cooler. I followed route 200 and stopped at a roadside "Geological Point of Interest" describing the events of thousands of years ago.

All along the route was evidence of what had happened all those thousands of years ago. It is hard for the layman to spot and I would just have taken it for granted had I not been made aware by what I had read. I spent one night at a motel in Missoula. In answer to her question, I told the check-in clerk what I was doing. Where we are standing was under 1200 ft of water I told her. "Never heard nothing about that", she said. "A bit before your time", I responded. This really concluded my research in the mega-floods but along the way I was greatly impressed by the mind-blowing scale of universal irrigation with the Columbia River as its source. Water is distributed across thousands of square miles of land through a vast infrastructure of canals and channels and sprayed over extensive fields by armies of computer-controlled robots. Annual rainfall is only about 7" over much of this area but irrigation has allowed it to produce vast quantities of fruit and other crops. It was still early in the growing season and, seeing the massive stacks of crates waiting to be filled with produce, reminded of a similar scene last year in the Aleutians where stacks of refrigerated containers awaited the arrival of the salmon. A worm of concern is that all this bounty depends upon the snow that falls in the mountains of Canada and the US which is the source of water for the Columbia and its tributaries. It would spell disaster if this weather pattern should be disrupted. I now headed south to visit my daughter Jackie in New Mexico. I drove through Idaho, Montana, Utah, Colorado and New Mexico.

The scenery was fantastic and varied; I can testify that in Montana the skies are indeed big. Unfortunately there was little opportunity for photography because there was seldom a safe place to stop. I resolved to figure out a set up where I could just press a button to operate a fixed, remotely operated, camera. Temperatures often started in the fifties in the morning but reached to over 100 degrees in the afternoon. When I reached Raton on Interstate 25, I took a detour up a very rough track to seek out a spot where it was possible to see the Iridium layer. This delineated the time, 80 million years ago, when the earth was struck by a giant meteor eliminating the dinosaurs. There are multitudes of dinosaur fossils in ground below this layer but none at all above it.

I arrived at Jackie's place in late afternoon. Jackie takes care of more than thirty mustangs from among thousands which have been rounded up from public lands by the Bureau of Land Management. This is a very contentious issue we need not go into here. Jack is building a traditional adobe house using adobe bricks which she lays herself. A back-breaking task as each brick weighs about 25 pounds and all exterior walls are double with a space between. The altitude is over 7,000ft so the air is dry, the temperatures reach 100 degrees (with cool nights) and the sun beats down out of a cloudless sky like a laser. This is not the way things used to be in the past in this area. After two days I continue on my way and reach home in California after passing Santa Fe, Albuquerque and Flagstaff, Arizona. My journey covered 3,000 miles since leaving Anacortes allowing me to re-visit events which shaped our planet many thousands - or even millions - of years ago. Some of the photos which accompany this blog were included with earlier blogs but I have attached them again with this one as a matter of convenience for the reader.