The Story Of Venture I - Part Eleven 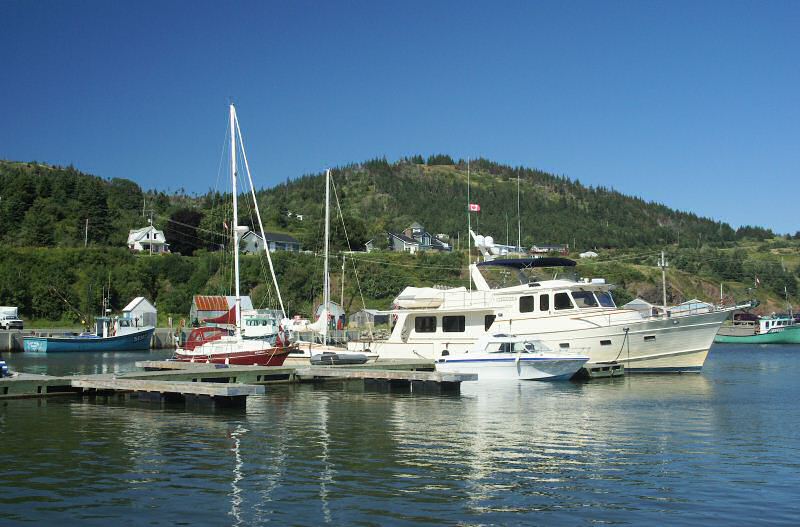 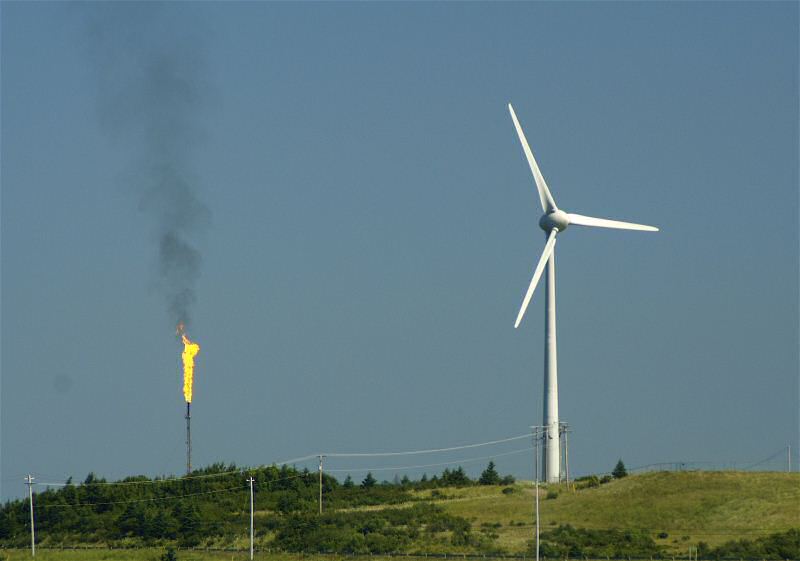 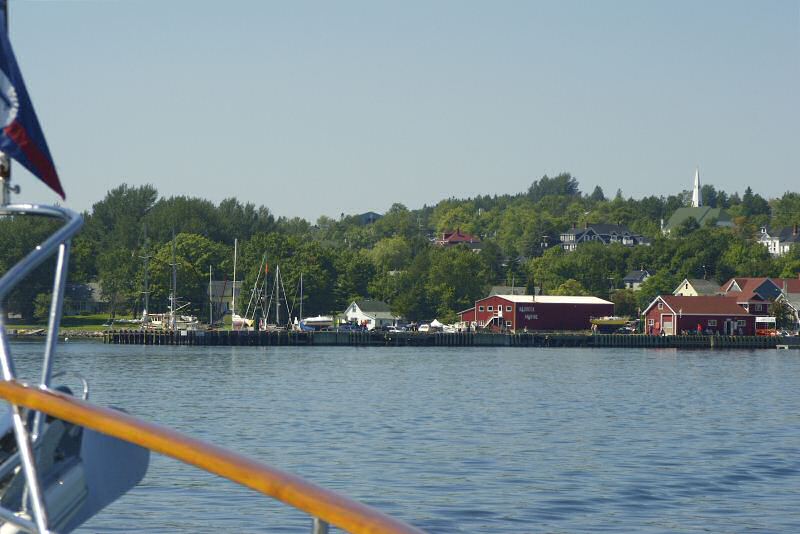 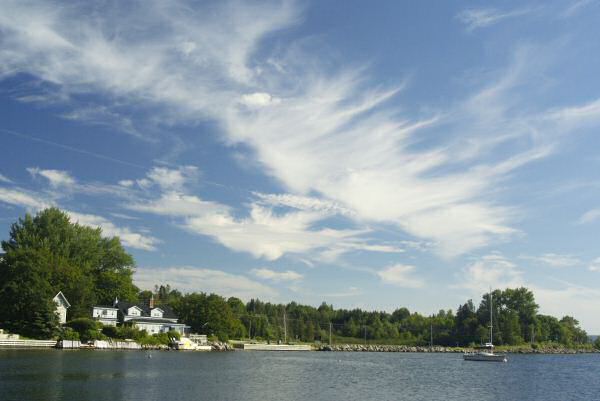 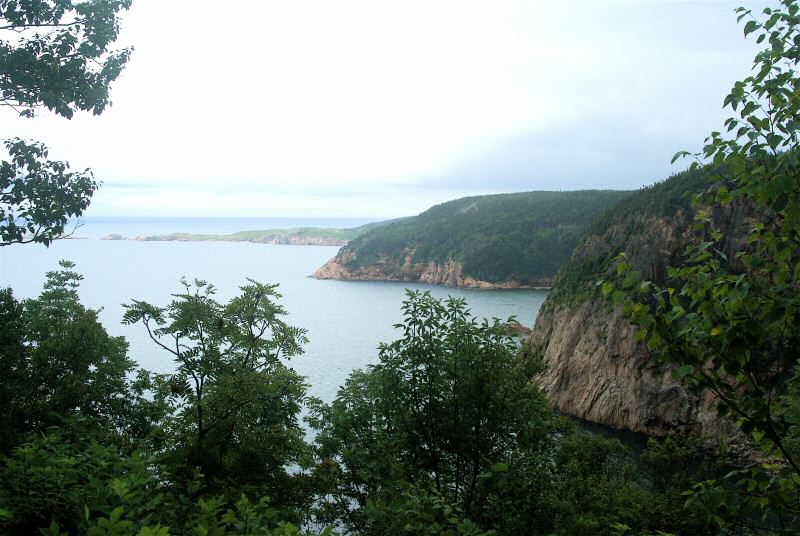 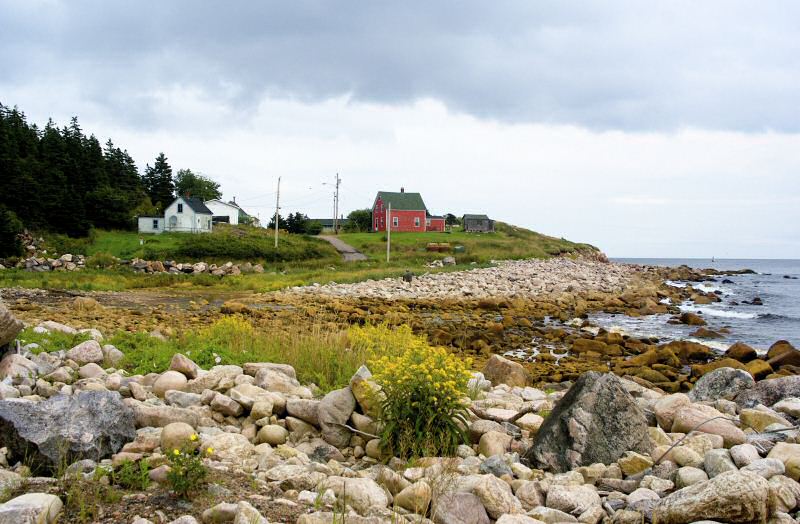 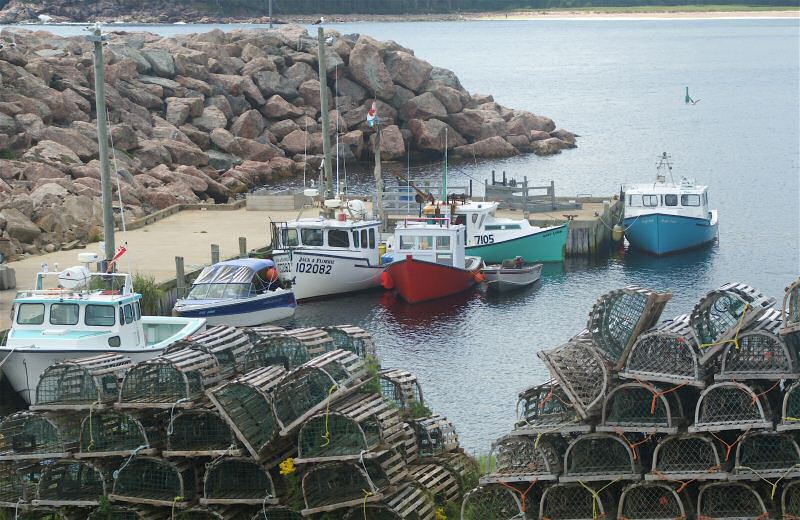 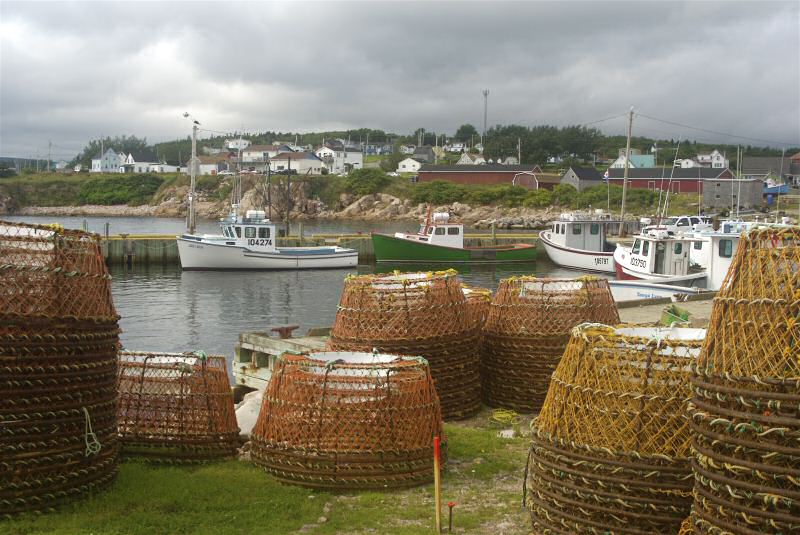 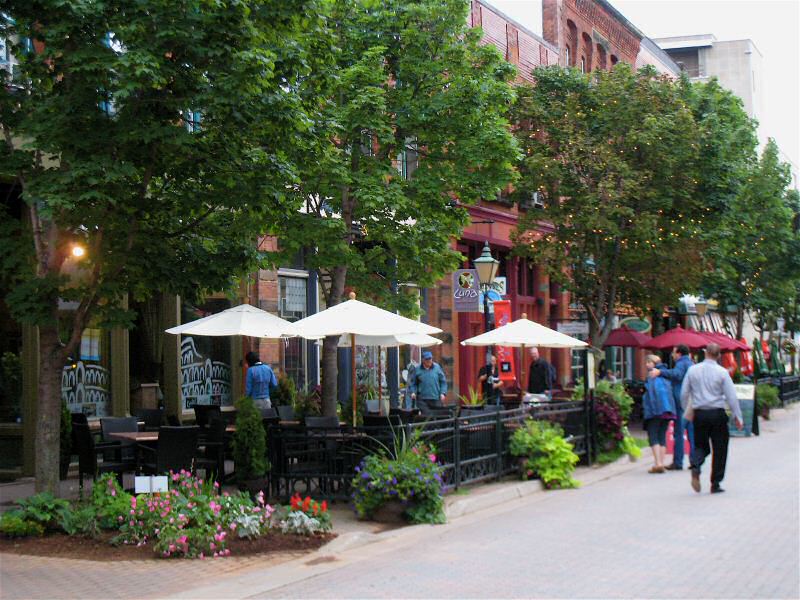 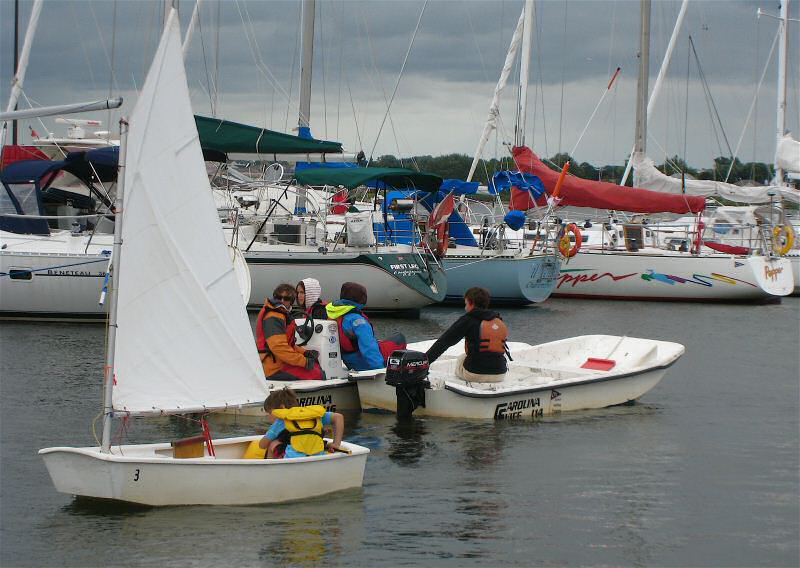 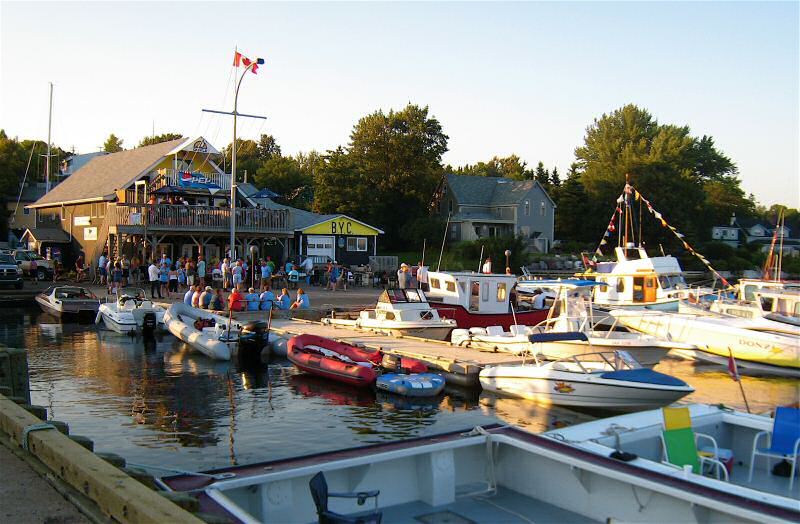 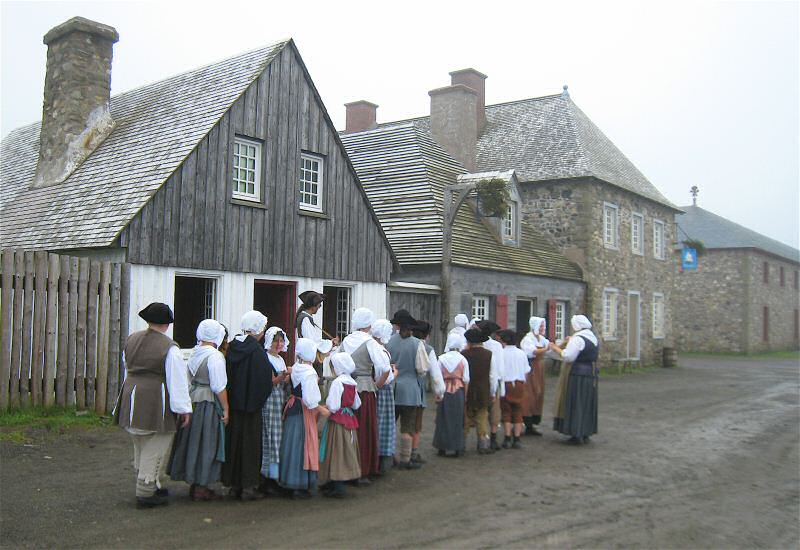 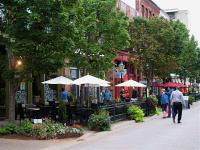 The day after our arrival in Charlottetown, on August 14th, there was a parade down Queen's Street led by a pipe band in kilts and full Scottish regalia. Maybe it's my Scottish heritage but I find that the skirl of the pipes brings forth a host of submerged memories. In any event it was a stirring sight watching the parade march past the historic buildings.

We rented a car and drove to the sand dunes at Greenwich on the north shore as well as back up to Summerside to research some family connections. We also drove up to North Cape where the waters of the Gulf of St. Lawrence meet the north Atlantic at the exposed tip of the island causing coastal erosion sufficient to have required the relocation of the lighthouse no less than six times. En route we had hoped to see Irish Moss being harvested from the sea at the village of Miminegash. This type of seaweed is traditionally retrieved after a storm by horses towing special rakes in the surf. Alas the season had closed early due to over-harvesting but we were compensated by seeing the local lobster boats running a high speed gauntlet of the narrow channel into the small harbor. We chatted with the locals about the scarcity of lobsters and we were interested to see that herring and mackerel are used to bait the traps. We had lunch at the Seaweed Cafe where there is an interpretive center describing the history of the Irish moss industry and even our waitress was able to fill in more details from personal experience.

From the traditional to the new, we went on to visit the collection of modern windmills at the research center situated at North Cape. We stood beneath one monster whose apparently slow turning blades cast shadows that fled at impressive speed across the rippling surface of a field of wheat while, above our heads, the tips of the elegantly skewed blades scythed through the air at a frightening velocity.

Our impressions of Price Edward Island were of an undulating, pastoral landscape whose rich red soil was intensively cultivated with extensive fields of the potatoes for which PEI is famous, along with crops of maize, wheat and barley. Huge rolls of hay, some neatly wrapped in giant sausages of white plastic, lay scattered in mown fields. Churches, often occupying a place of prominence on a hill, were abundant and every house and church was clad in pristine siding and surrounded by a rich green carpet of immaculately groomed lawn.

Farming and fishing were the staples of the economy and neither were in very good shape and not helped by increased fuel prices. We again heard stories of many men going to Alberta to take advantage of the jobs created, ironically, by the tar sands oil extraction process.

The weather for most of our stay was not the best with strong winds, thunderstorms and heavy rain which the locals complained were not normal for this time of year. Our berth was exposed and, with the wind from the southeast making for bumpy conditions after a long fetch across the bay, we cannot in good conscience recommend this as an ideal place to tie up. Three rivers flow into the estuary which, when combined with significant tides, produce strong and contrary currents. Undaunted by the weather, kids of all ages sailed dinghies from the yacht club every day and, at least two days per week, there were evening races for larger yachts that finished just before dark. With summer lasting only a few short weeks, every hour of daylight is used to maximum advantage.

Not being sure of where fuel might next be available we refueled for the first time since leaving Quebec even though we still had more than 500 gallons in the tanks. After a stay of seven nights we cast off our lines and headed further down the Northumberland Strait to mainland Nova Scotia. The breeze was brisk and whitecaps numerous but it was a clear, crisp morning with blue skies and, for once, the weather was behind us. As we approached Cape George, the thought came into my head that all we needed to make a perfect day even better would be to see some whales when, right alongside the boat, a pod of pilot whales suddenly appeared. It was a wonderful surprise to see their shiny black bulbous heads and prominent fins among the whitecaps.

Once in the lee of Cape George the waves subsided and we headed for the narrow entrance into the marina at Ballantyne's Cove. This tight little marina had few amenities other than a fish and chip shop but was in a delightful rural setting and offered a safe and secure haven.

This was just an overnight stop for us and the following morning, under calm conditions, we traveled to the lock and bridge at Canso. This is a lock to control current flow in the channel which divides the mainland of Nova Scotia from Cape Breton Island and has very little rise and fall. In fact it is not necessary to tie up to the dock wall and the far gates are already cracked open to speed up the exchange of water. Once through the lock, the channel was quite commercial with a bulk carrier unloading coal for the power station and a couple of tankers tied up at the oil terminal. The clean lines of a large modern windmill made an interesting contrast with the tall smoky flare off from the nearby oil facility.

We had been told that on no account should we miss out on visiting the Bras d'Or lakes which lie at the heart of Cape Breton Island. These lakes are a leftover from the last ice age 10,000 years ago and have limited access to the sea through narrow channels on the northeast coast which limits the salinity in the lakes to less than 60% than that of the adjacent ocean.

We entered the lake through the scenic St Peter's Canal which opened in 1869 and went around the corner to the St Peter's marina located in another delightful rural spot. We walked up the road to a local restaurant where we had an excellent meal served by a waitress whose local accent carried more than a hint of an Irish brogue.

The following morning we followed a twisted route across the large lake at a leisurely eight knots which kept Venture's fuel consumption to well under one USG per mile. The 27' clearance under Barra Strait Bridge allowed us to pass beneath it without requiring an opening and we made our way to the small town of Baddeck. The Port Captain allocated us a berth on the main jetty outside the yacht club but warned us that club members were out on a poker run in their boats and that things were likely to get noisy on their return. He was absolutely right and the jollity went on into the wee hours.

This remote town was home, for thirty-seven years, to the inventor of the telephone, Dr Alexander Graham Bell. Although born in Edinburgh, Scotland, Dr Bell moved to this small town in 1885 after being shipwrecked with his family on the coast of Newfoundland. Although best known for inventing the telephone, his many other inventions - far too numerous to list here - run the gamut from working with the deaf, devising the first iron lung and developing what in 1919 was the fastest boat in the world. This was tested on the Bras d'Or Lake and its remains, together with a full scale replica, can be seen in the excellent Alexander Graham Bell museum in Baddeck. Aviation was another of his interests and February 23rd 2009 marks the 100th anniversary of the first flight of Bells's Silver Dart airplane which made the first controlled powered flight in Canada and the British Empire on 23 Feb 1909. On the 50th anniversary in 1959, a DC aircraft landed on the frozen lake but serious doubts are being expressed about whether it will be possible to repeat this feat given the effect that global warming has had in recent years on the freezing of the Bras d'Or Lakes. Bell's grand house, Beinn Bhreagh (Gaelic for Beautiful Mountain) still occupies a prominent position overlooking the bay. He died here in 1922 and is buried on the hill behind the house.

We stayed four nights in Baddeck and while there hired a car and drove to the amazing, French fortress of Louisbourg on the east coast which suffered two sieges and was the scene of much bitter fighting between the British and the French in the 18th century. An extensive reconstruction, started in 1961 and covering one fifth of the original fortress, has been designed to reproduce the summer of 1744 and costumed staff populate the streets and buildings and re-enact contemporary scenes of daily life.

We also drove the scenic Cabot trail which loops its way through the Cape Breton Highlands National Park. Alas the weather did not cooperate and much of the beauty was concealed behind curtains of fog and rain at the higher elevations but the rugged coastline, with its dramatic cliffs and small, picturesque harbors, was worth the trip.

Cape Breton Island has had a tumultuous history some of which is even reflected in its road signs. In some areas these are in English and Gaelic and in others in English and French - the latter in deference to an enclave of Acadians who moved to the northwest corner of the island around 1784. The form of French they speak differs from that spoken in France and even in Quebec.

The night before we left, we were hailed by the couple sailing the Freedom sailboat Blue Jacket. We had first encountered each other while traveling up the Hudson from New York and we had been following the same route ever since. Although our speeds and schedules had been slightly different, we had bumped into each other in Montreal, Quebec, Charlottetown and now Baddeck. They have sailed their sailboat for many thousands of miles and details of their extensive travels can be found by visiting their website www.geoffschultz.org.

North Easterly gales had been forecast and started to blow as we were getting ready to leave on August 27th. The wind was pressing us against the weather side of the dock but bow and stern thrusters greatly simplified getting underway and avoiding the obstructions jutting out from the jetty immediately ahead and astern of us. It was a grey, rainy day as we retraced our route through the Bras d'Or lakes and through the picturesque St Peter's canal. For the first time since we left the Galapagos Islands, we anchored for the night in a small bay and the following morning headed out into the cold, grey North Atlantic. The north easterlies were blowing at 30 knots and were initially on the beam as we headed down the extremely rugged coast of Nova Scotia. Once around Cape Canso the wind and waves were from aft and we had a comfortable ride, surfing at speeds in excess of 15 knots. Our only companions in the grey seascape were the elegant gannets clearly in their element skimming the wave tops.

After 100 miles, we turned in towards the treacherous coast and threaded our way into a bay called Tangier harbour where we anchored for the night protected by the surrounding islands from the blustery conditions outside. With less than fifty miles to go we were tied up in downtown Queen's Wharf Marina in Halifax by noon the following day. Halifax is the capital of Nova Scotia as well as being the largest Canadian city in the maritime provinces. We plan to spend several days here to visit its points of interest and learn something of its history.