The Story Of Venture I - Part Four 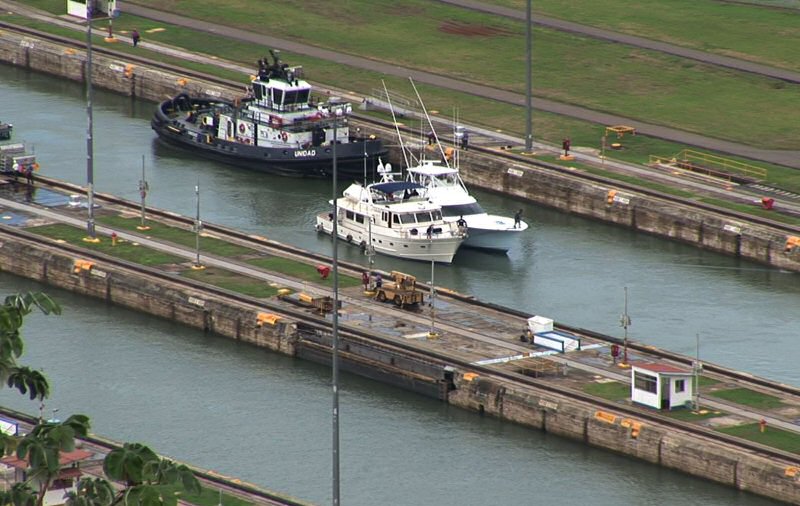 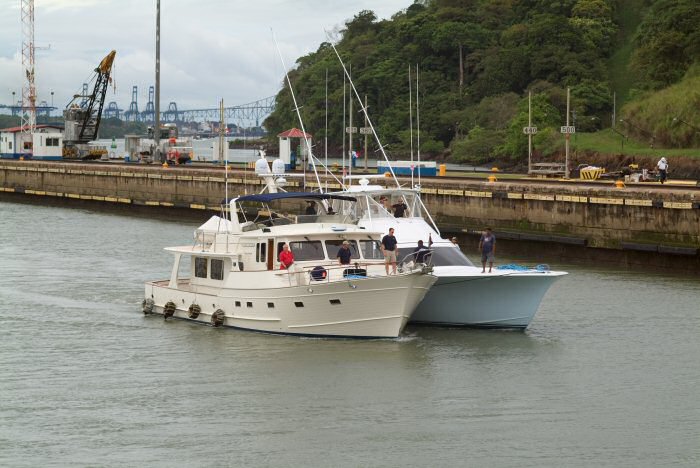 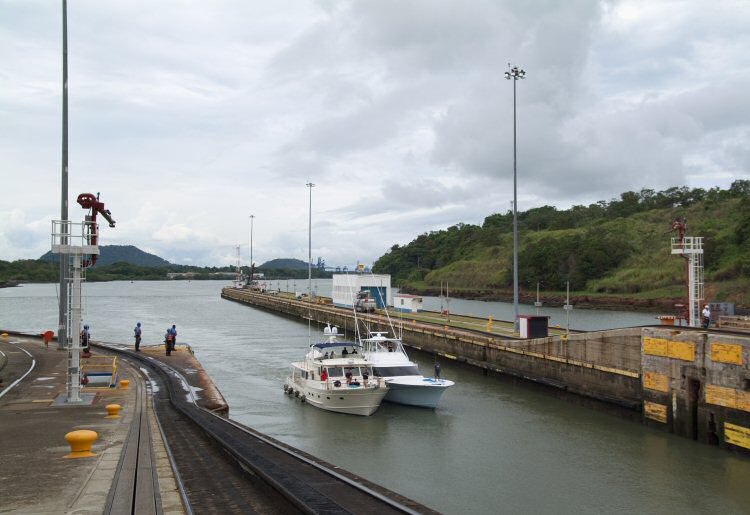 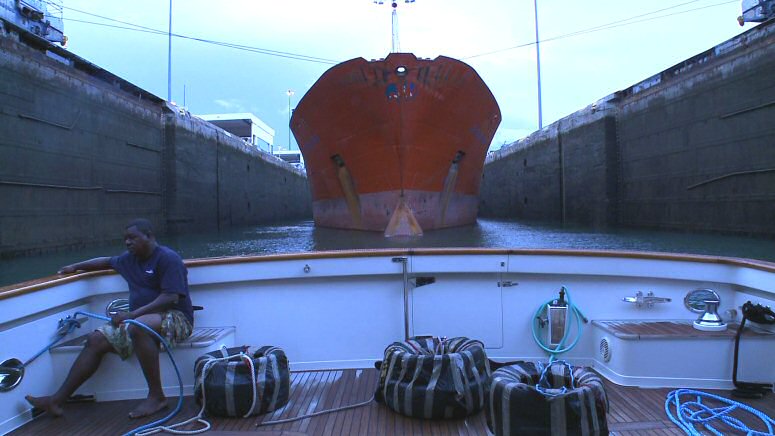 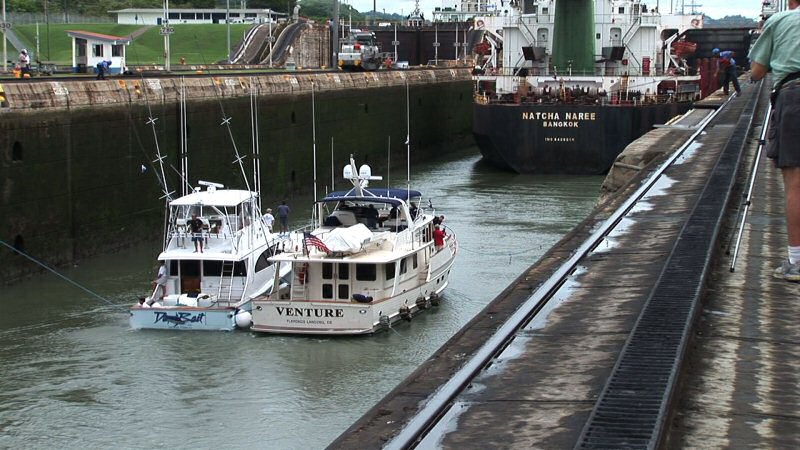 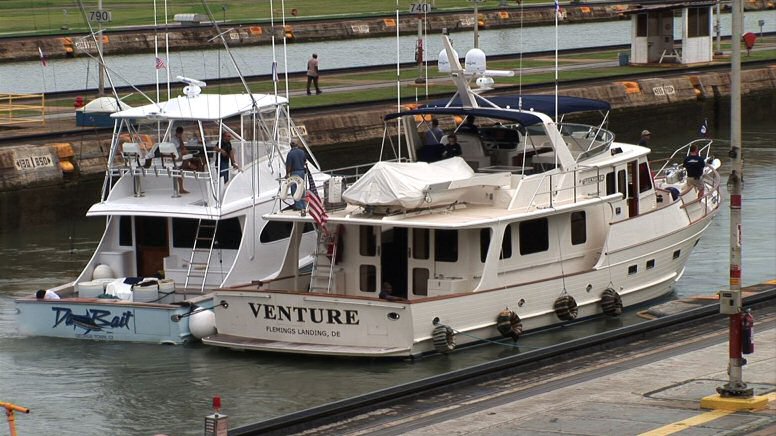 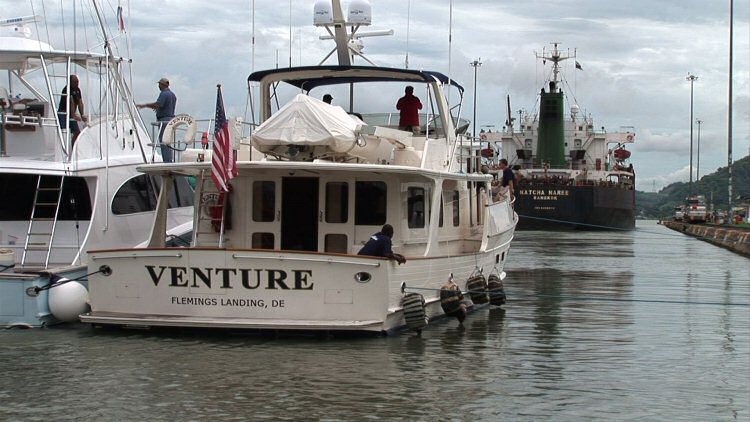 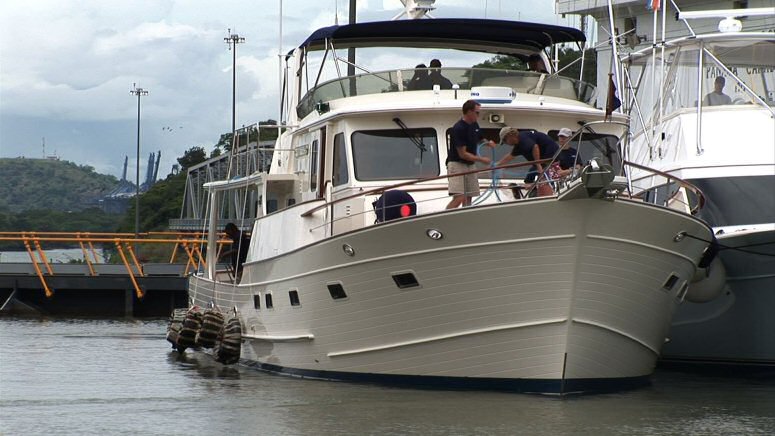 Although our crossing was relatively uneventful our landfall was quite exciting. It was midnight when we arrived at Punta Mala at the head of the Azuero Peninsula which forms the western side of Panama Bay. Punta Mala (Bad Point) is a turning point for ships heading to and from the Panama Canal and, with 40 transits every 24 hours, traffic was heavy around this point with huge Panamax Class container ships heading in both directions at speeds of up to 26 knots. We were kept on our toes dodging these behemoths and, on several occasions, we found ourselves within a mile of ships passing us on both sides heading in opposite directions.

Once we reached the sea buoy at the head of the bay we called Flamenco Signal Station for permission to proceed to our pre-arranged berth at the Flamenco Marina where our arrival formalities in Panama and arrangements to transit the canal were greatly simplified using the services of long established agent, Pete Stevens.

The following day we were visited by an official measurer from ACP - Panama Canal Authority. She came armed with a tape for checking the length of the boat and a lengthy questionnaire which included such questions as whether the twin screws rotated inboard or outboard and the horsepower of the bowthruster. Small vessels such as Venture are referred to as "handlines" and are subject to special rules. They must have a whistle or a horn and be capable of at least 8 kts. Every boat must be equipped with four lines at least 125' long as well as an adequate number of heavy duty fenders. The lines and fenders - in the form of plastic-wrapped tires - can be rented. Boats 65' or larger will be provided with a fully-fledged pilot while smaller boats will have a Transit Advisor. A meal, fresh drinking water and a decent toilet must be provided. A bucket in the cockpit does not qualify. The vessel must have substantial cleats and closed chocks so that the lines do not jump out when the boat is at the bottom of an empty lock.

Our actual transit was a couple of days later and began with us taking on the pilot in bumpy sea conditions from a pilot launch just outside the entrance channel. We were directed under the Bridge of the Americas which, until 2005, carried the only road linking north and south America. After a short wait in the Balboa basin we rafted alongside a 55' sports fishing boat and, with Venture providing the motive power, we slowly moved together into the lower basin of the Miraflores locks. We were barely inside when the massive lock gates swung closed behind us. Ahead of us in the same chamber was a bulk carrier from Bangkok. Messenger lines, with a small but dense monkey-fist on the end, were thrown aboard by line handlers on the sides of the locks. You need to be paying attention because if struck on the head you could knocked cold by these fast moving objects.

The messenger lines were attached to 3' loops in the ends of the 125 ft lines by the crew aboard the boats and then hauled back through the closed chocks by the line handlers on the lock walls. As the boats moved deeper into the lock the line handlers walked alongside them and, at the appropriate spot, dropped the loops over bollards.

A bell sounded and water began to boil up into the lock through culverts in the floor of the chamber. As the boats rose, the dock lines were progressively shortened by crewmembers aboard the boats using the cleats as snubbers. The mixing of fresh and salt water causes extra turbulence in the first and last locks where canal water meets the sea.

In short order we had risen 27 ft and were now floating above the lock sides. The forward gate opened and we braced ourselves for the prop wash from the bulk carrier ahead of us. Vessels larger than 125 ft are held in the center of the lock chambers by locomotives called mules. They serve only to guide the ships through the locks and forward motion is provided by the vessel's propulsion system. We moved into the second chamber and the process was repeated.

We remained rafted to our companion boat for the short length of the Miraflores Lake to the Pedro Miguel lock with a vertical lift of 31 ft. Here the procedure was similar except that we had traded the bulk carrier for a canal authority tug. After exiting this single lock we separated from our neighbor and continued independently for several miles until we met again late in the afternoon at the Gatun locks for the descent back to sea level on the Caribbean side of the isthmus.

After leaving the Pedro Miguel lock, the canal passes under the modern Centennial Bridge. opened in 2005, and passes through the Gaillard Cut. Also known as the Culebra Cut, this section of the canal slices through the continental divide and was the source of enormous construction difficulties. Even after it was opened, subsequent landslides in this area blocked the canal and, in 1915, caused it to be closed for as long as seven months.

The canal is relatively narrow in this section and we met - and even overtook - large Panamax class ships. These ships are purpose built to fit the locks with a clearance between the hull and the dock wall of only two feet on either side. Nowhere else would you dare run in such close proximity to ships of this size.

When crossing the expanse of Gatun Lake we took a shortcut through Banana Channel. This narrow channel is extremely well marked with red and green buoys every 150 ft and beyond its confines can be seen the tops of trees drowned all those years ago when the lake was formed. In places there are small tree-covered islands and in others the banks are rich with tropical vegetation.

The Gatun locks have three chambers which dropped us back down to sea level. Despites reports to the contrary, sea levels at the Pacific and Caribbean ends of the canal vary by no more than 6". The big difference is that the tidal range at the Pacific end is 18' (max 22') while at the Caribbean end it is only 3'. In the Gatun locks we were again rafted to the sportfisher but our lock mates were a tug ahead of us and a small tanker aft. Painted bright red as if to emphasise the threat, its bow loomed menacingly over us but at least we did not have to be concerned about the wash from its propeller.

It had been a long day and dusk was upon us as the final lock gates swung wide and we headed for the waters of Bahia Limon. Once there the pilot scrambled aboard the cutter and we headed for the slip at the Panama Canal Yacht Club in Colon. It was hard to believe that in just one day Venture had crossed the continental divide from the west to the east coasts of the Americas. Although her course was almost due north, her arrival point on the Atlantic side lay west of her departure point on the Pacific coast.

I am writing this latest update in Grand Cayman 600 miles north of Colon where we will be catching our breath for a couple of days before tackling the next 500 mile leg, past Cuba, to Key West where we will re-enter the USA.