Vancouver Island to the Aleutians and Beyond - Part Eight 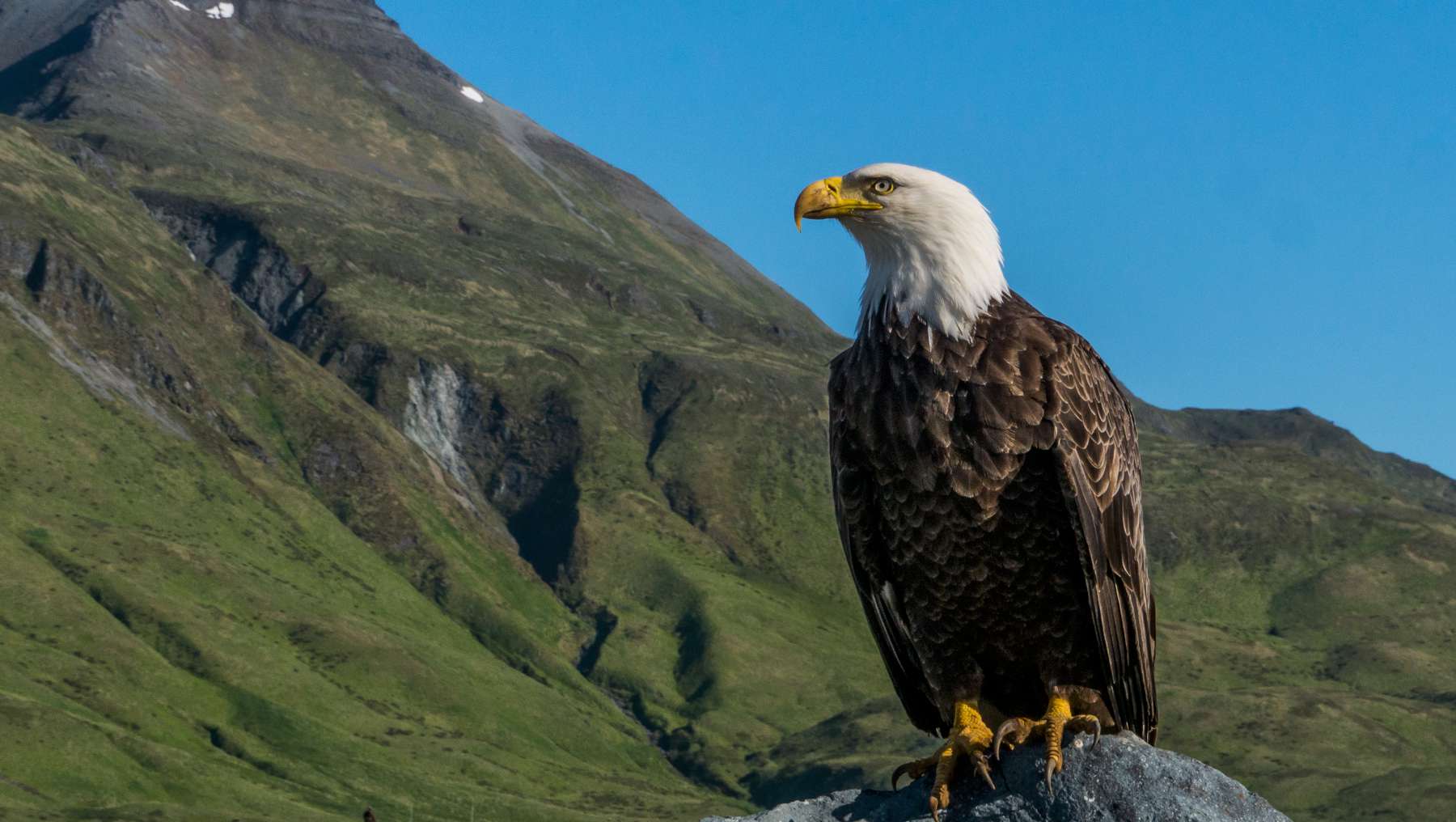 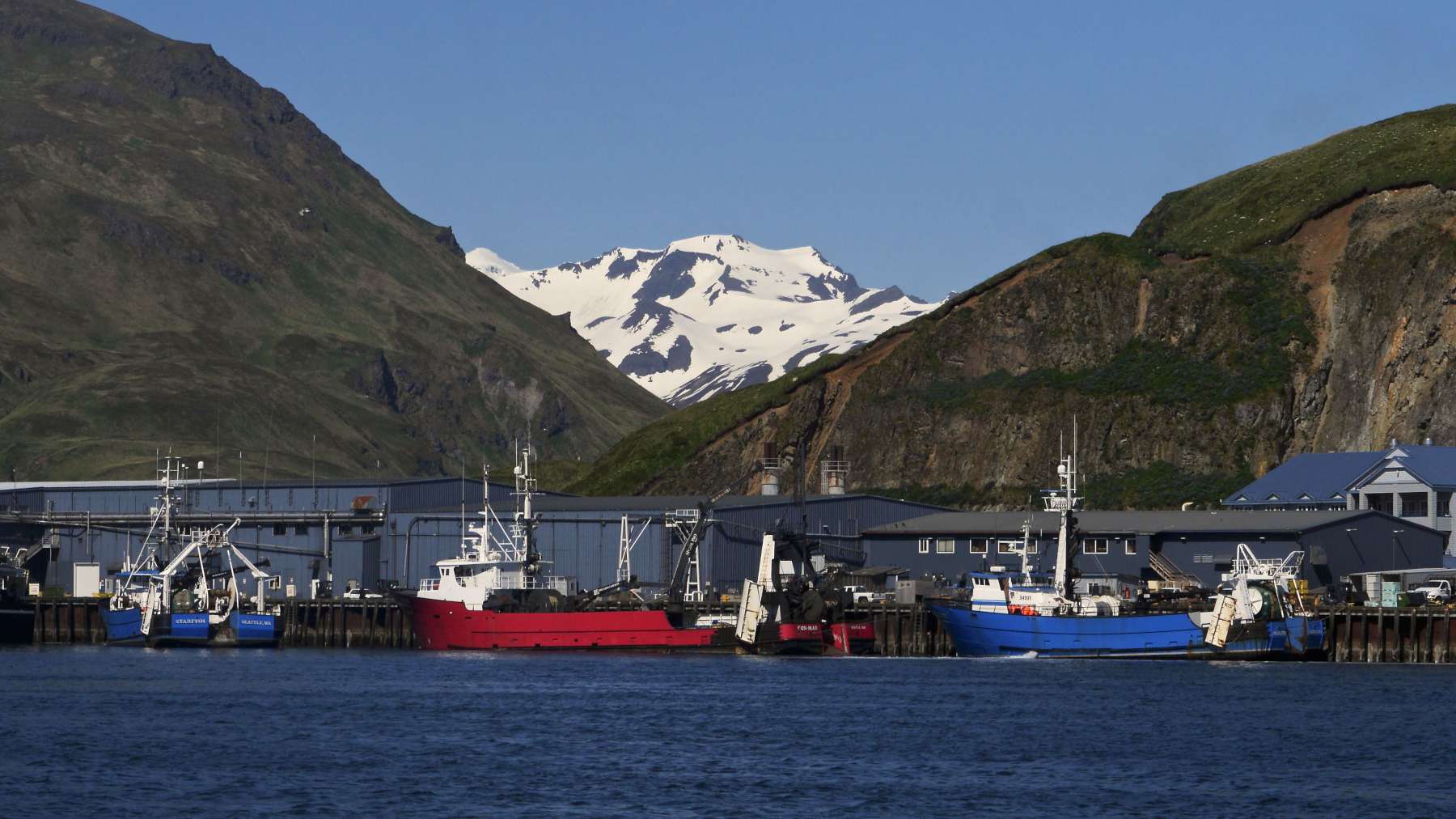 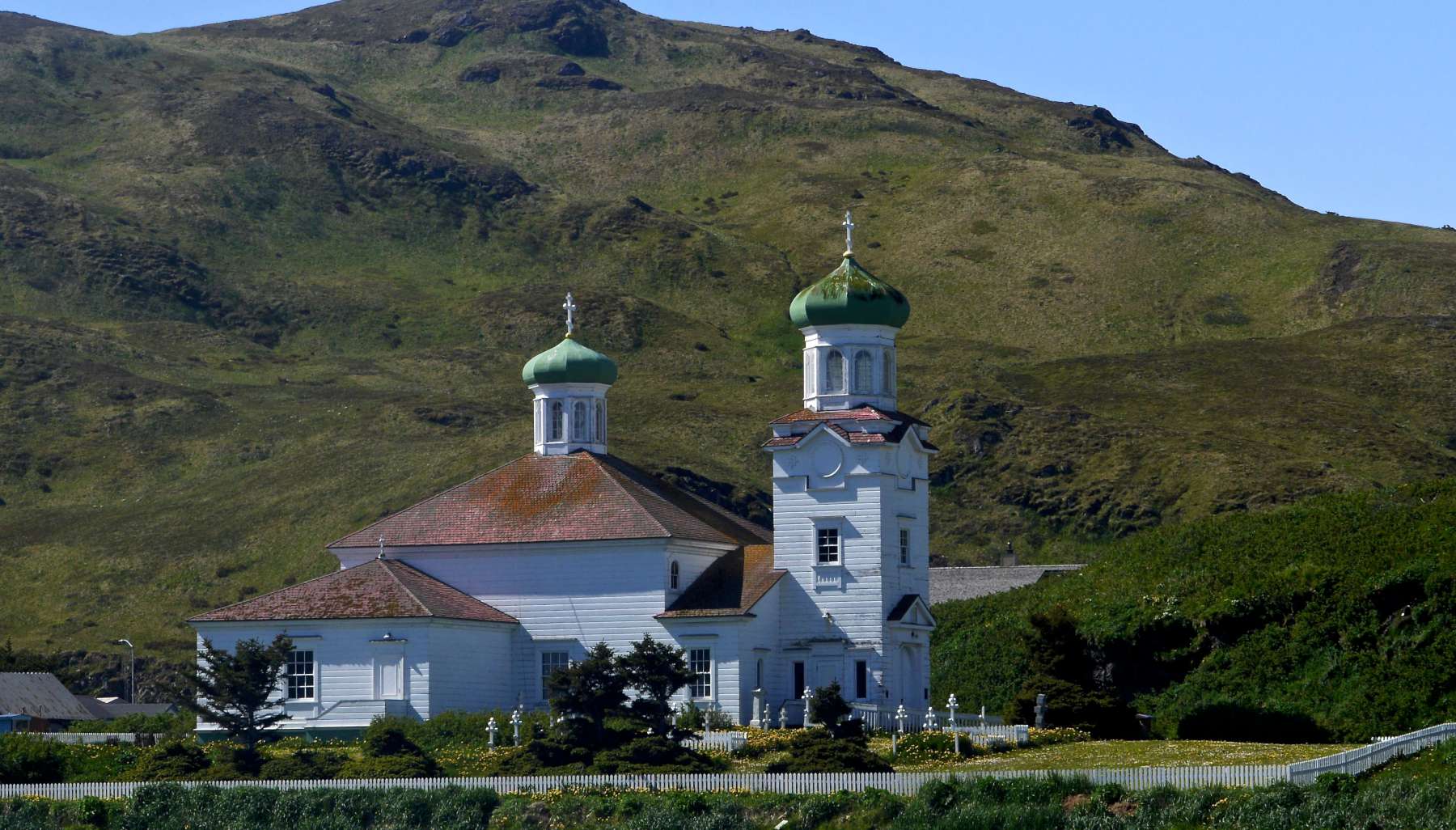 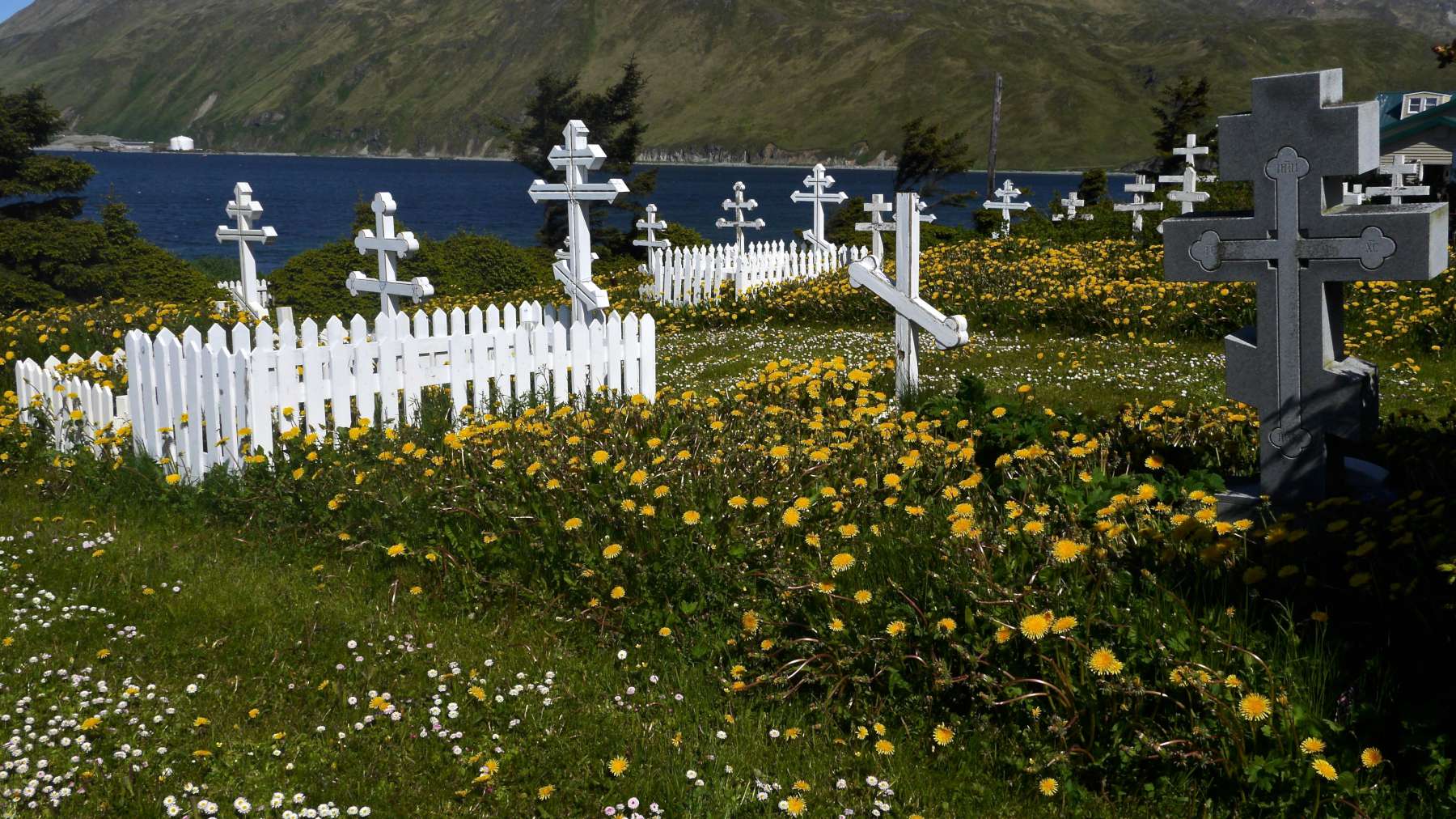 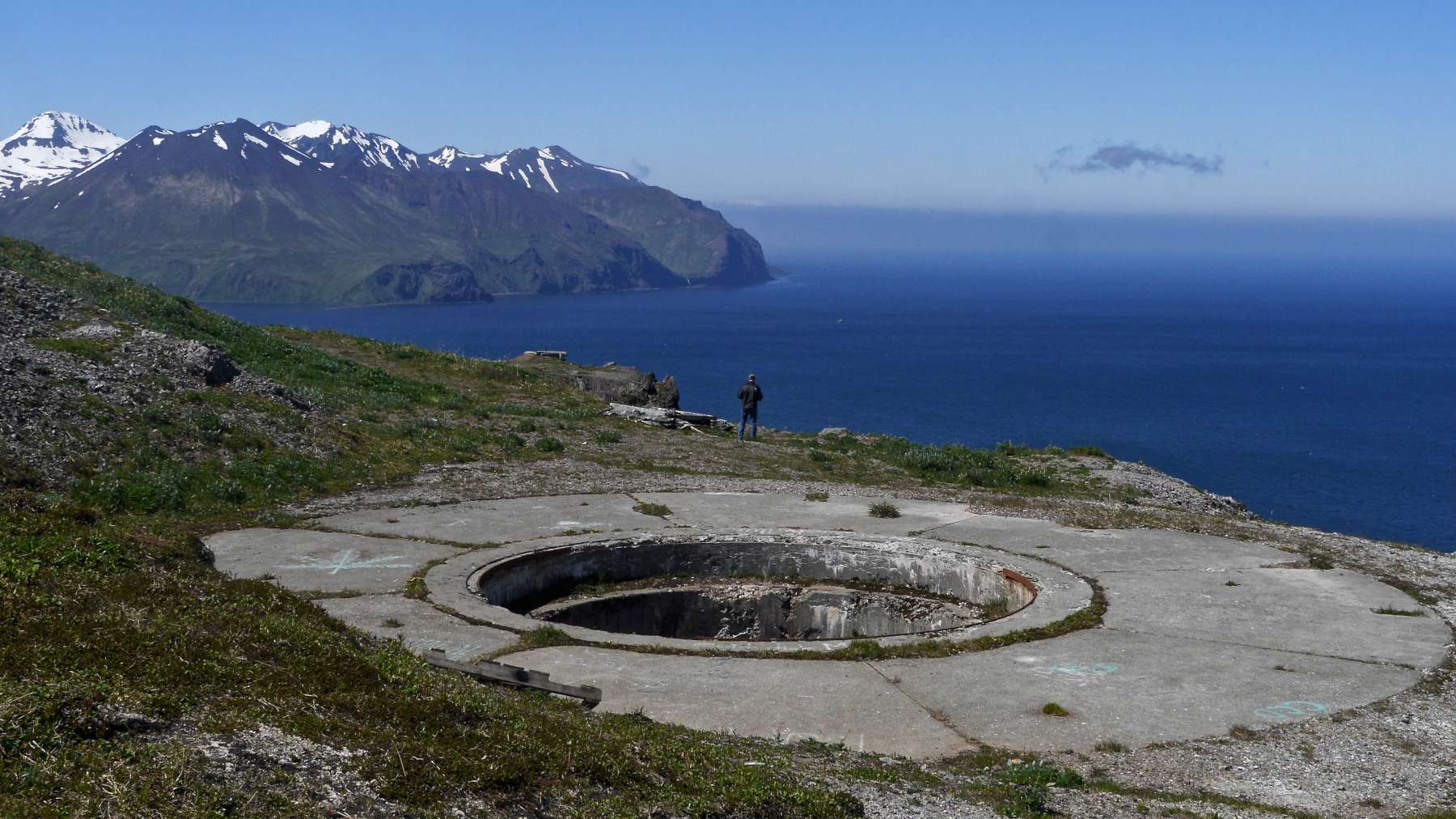 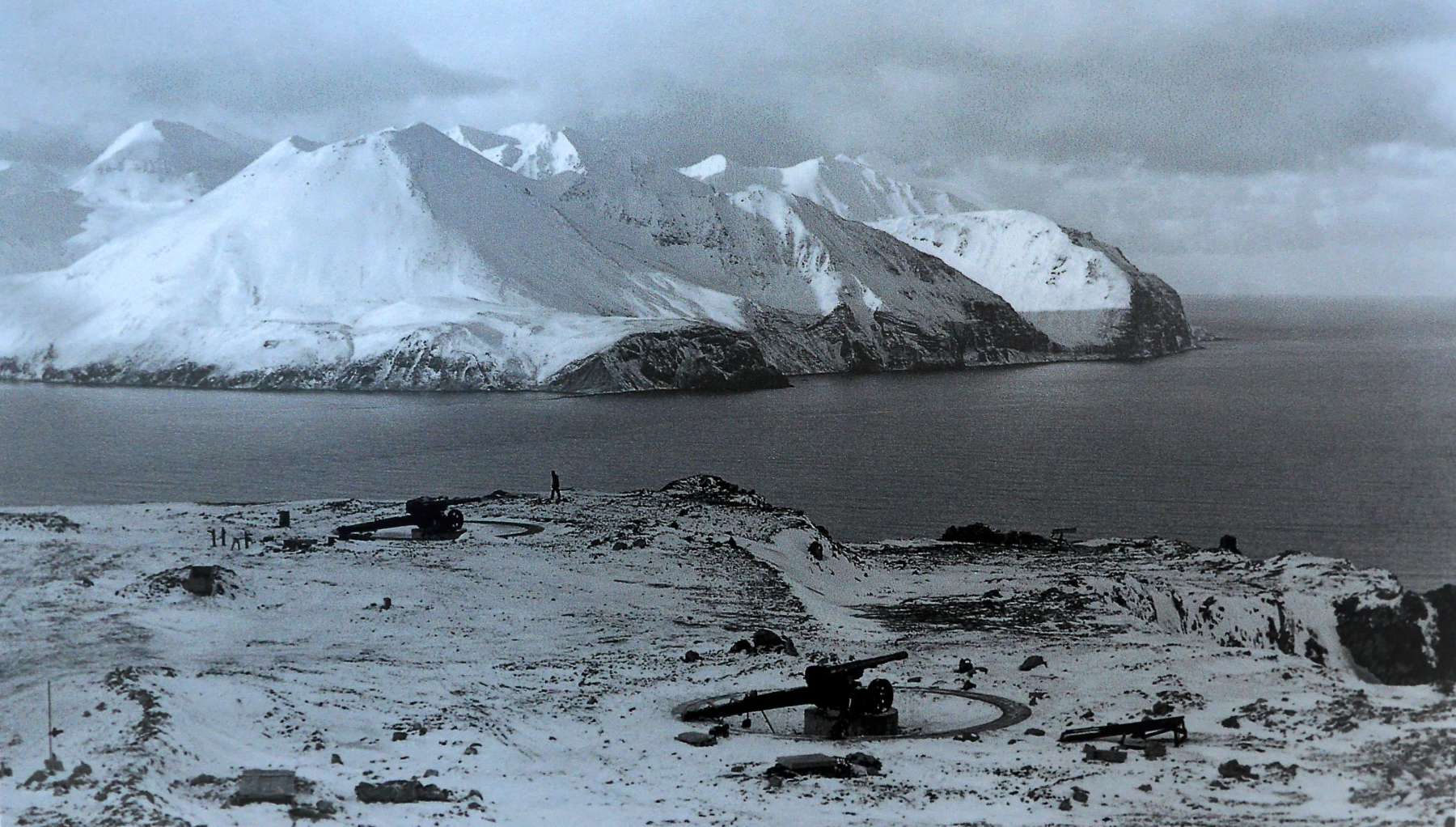 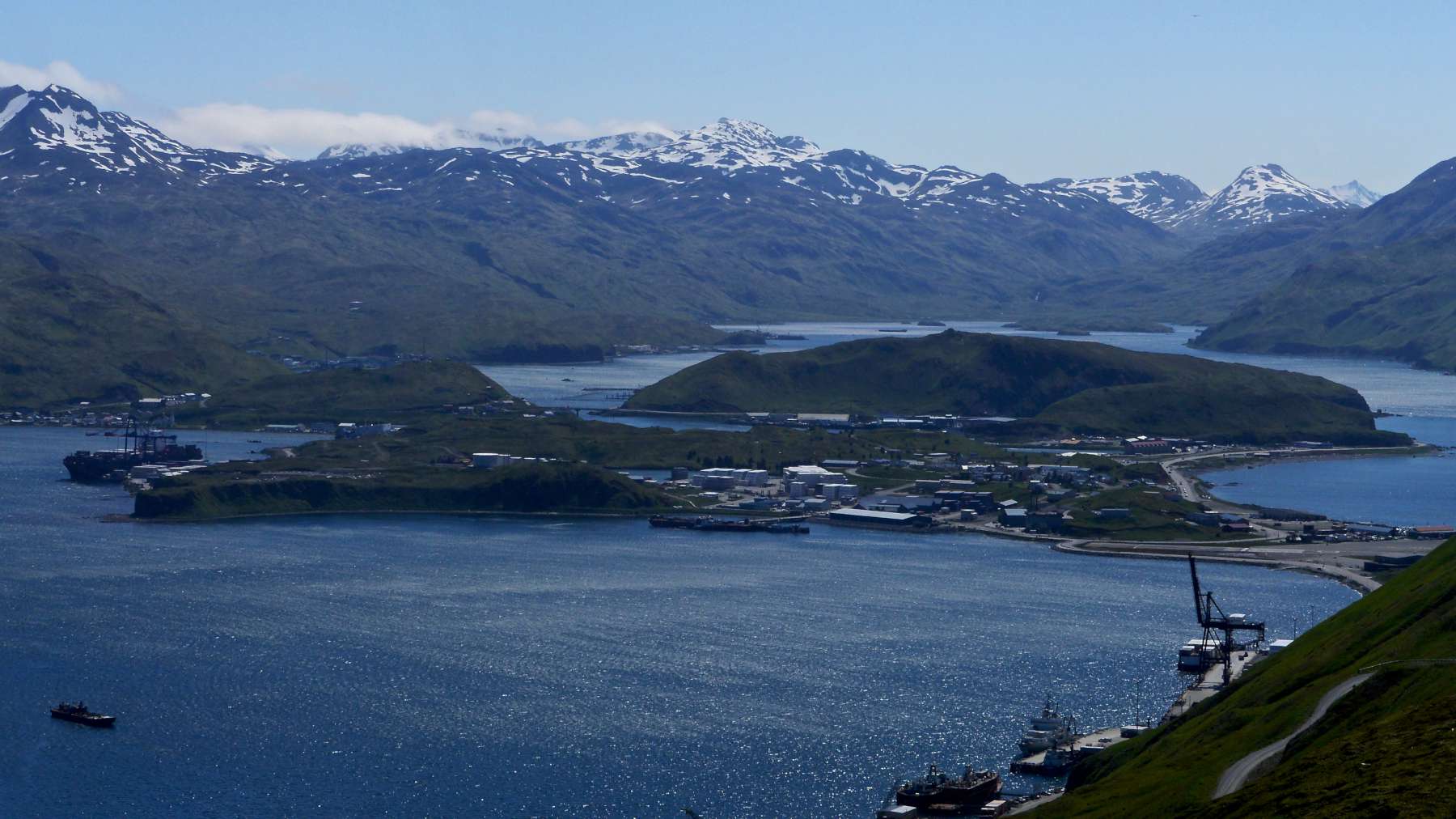 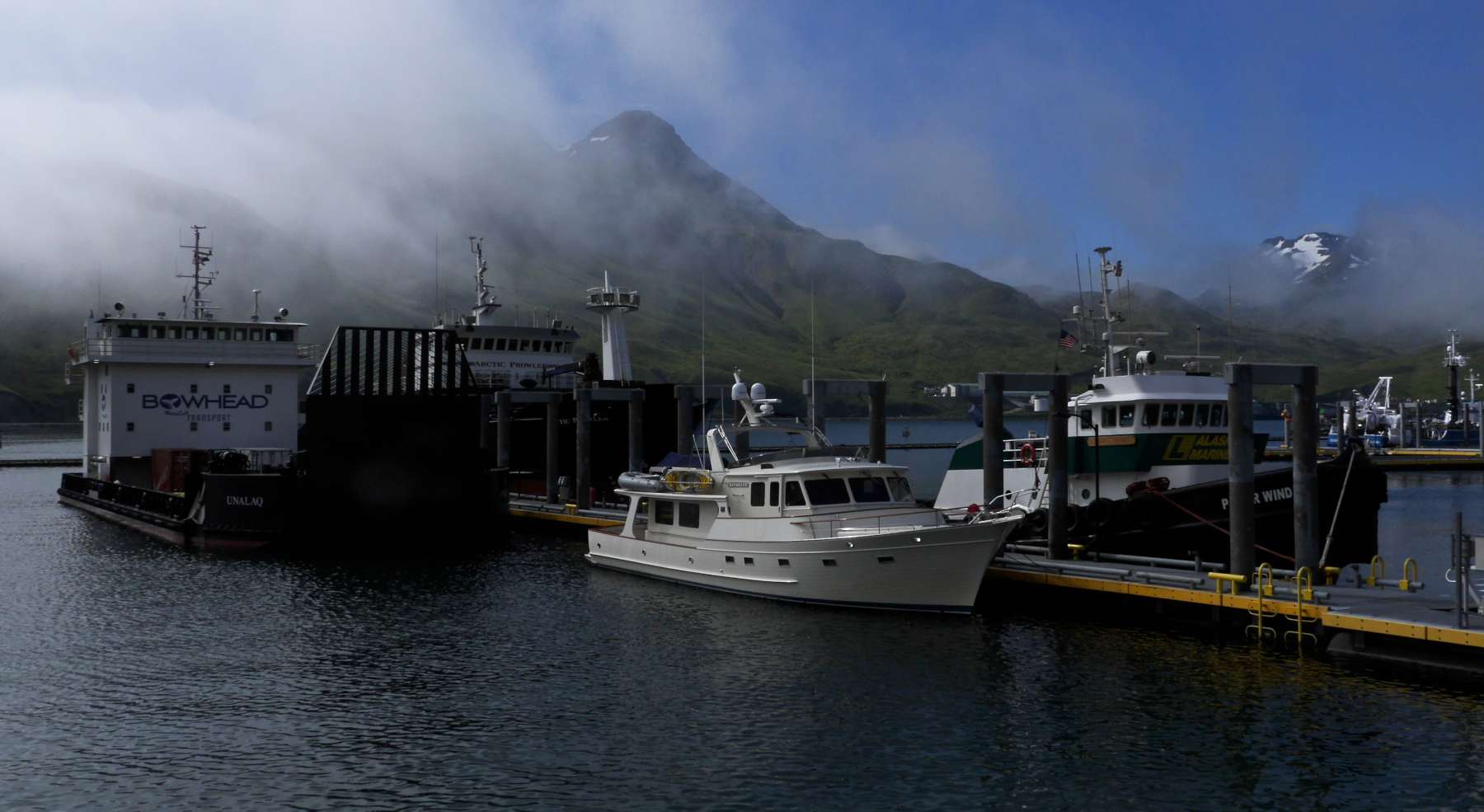 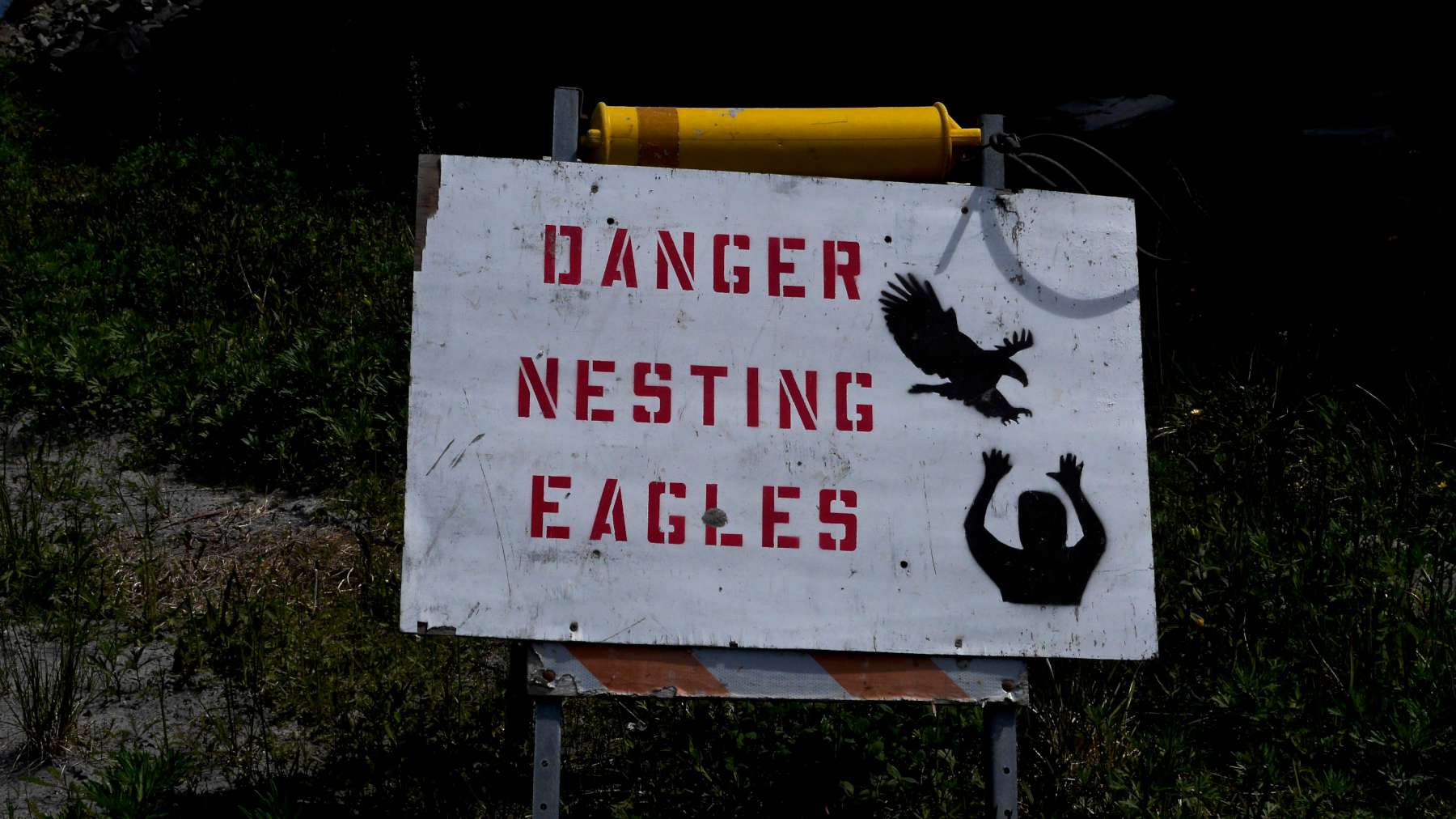 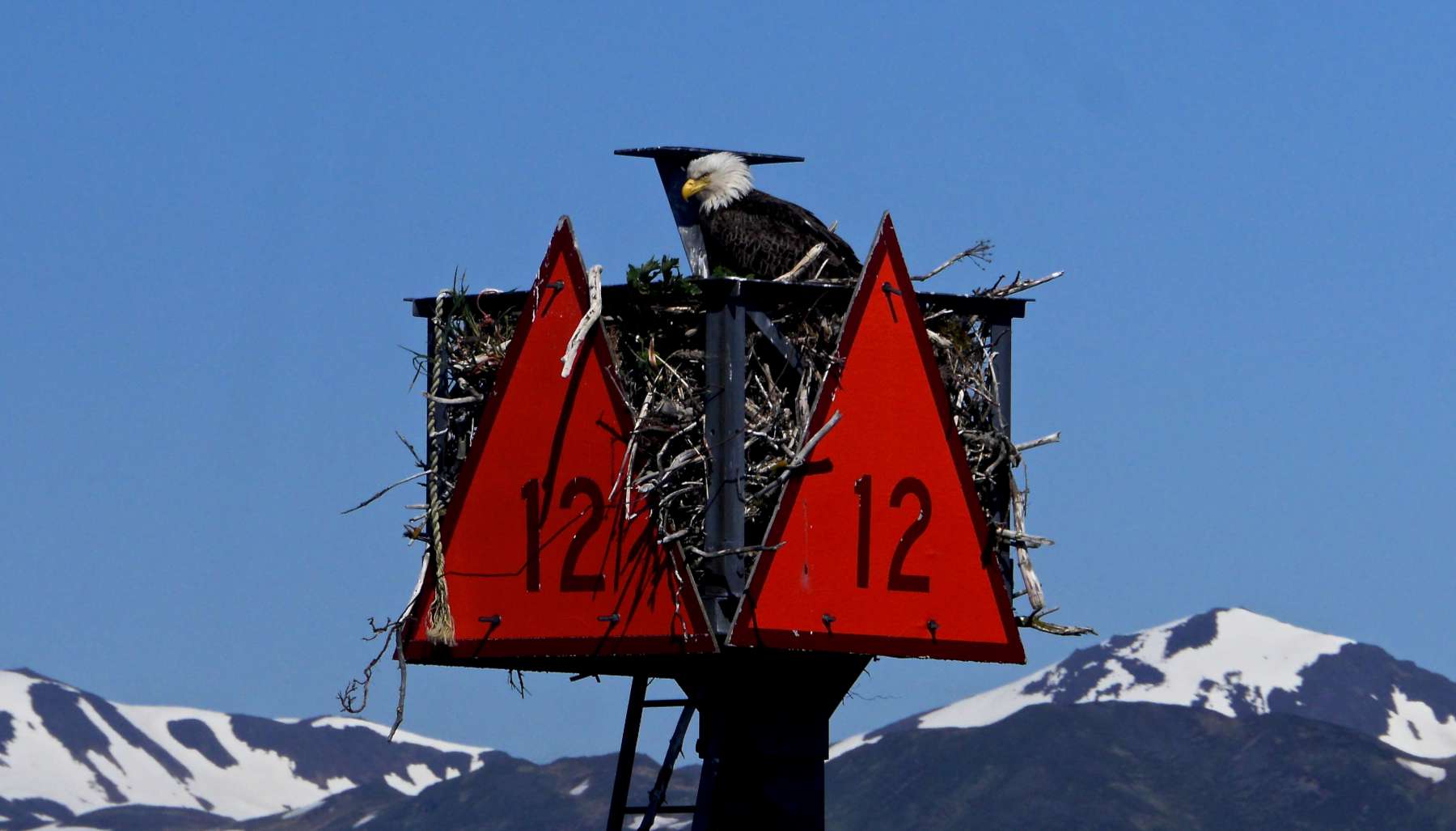 Eagles nest where they can 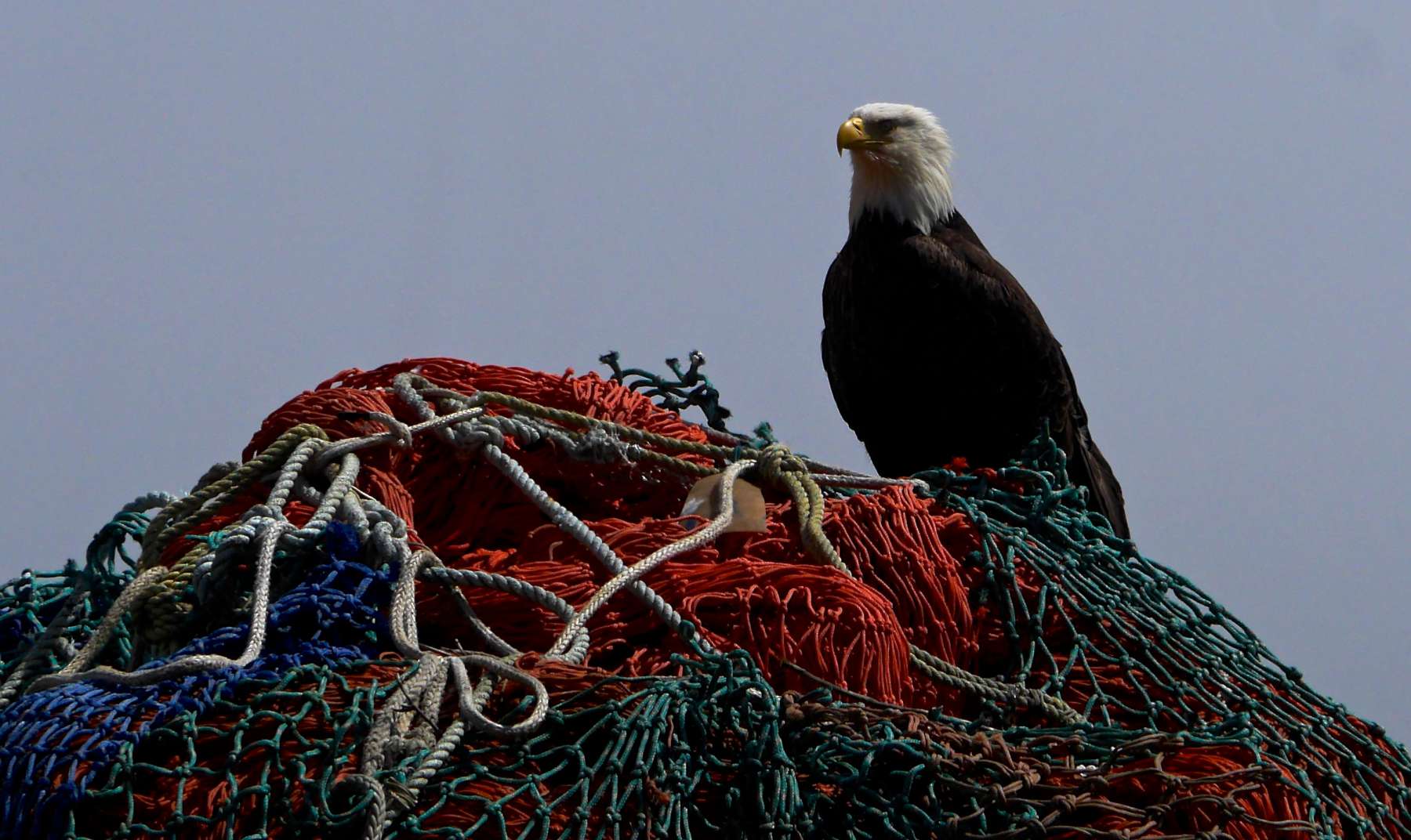 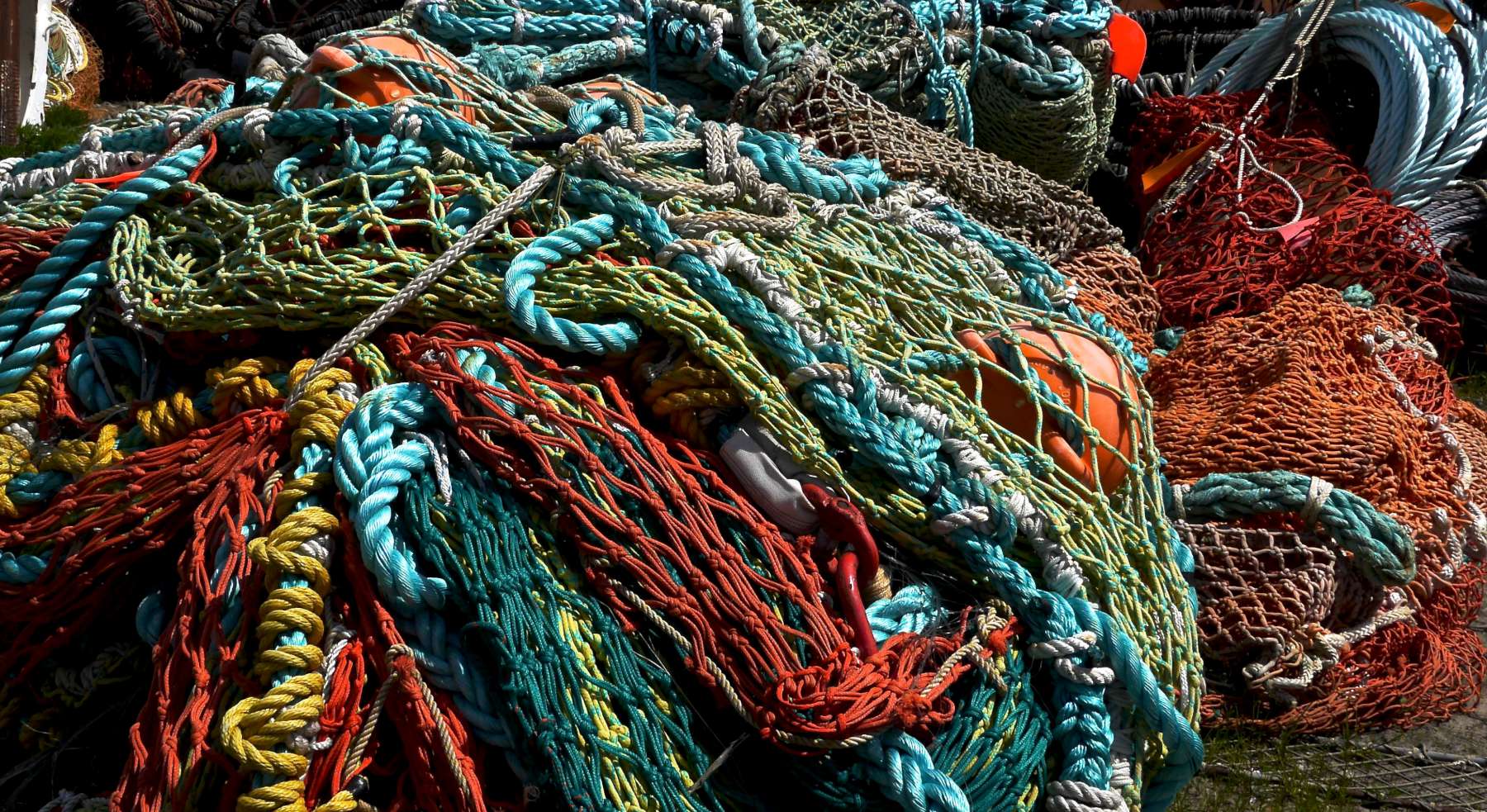 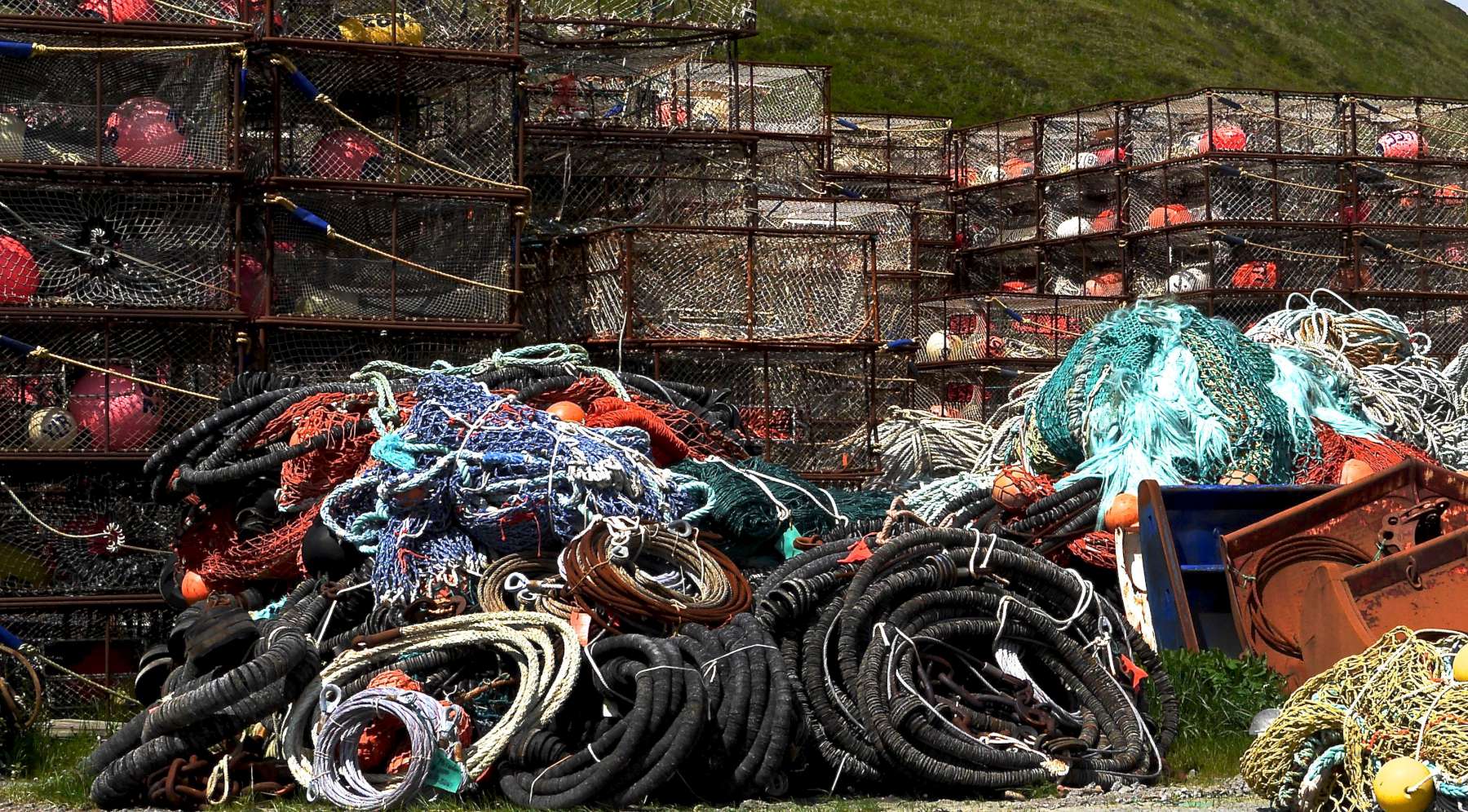 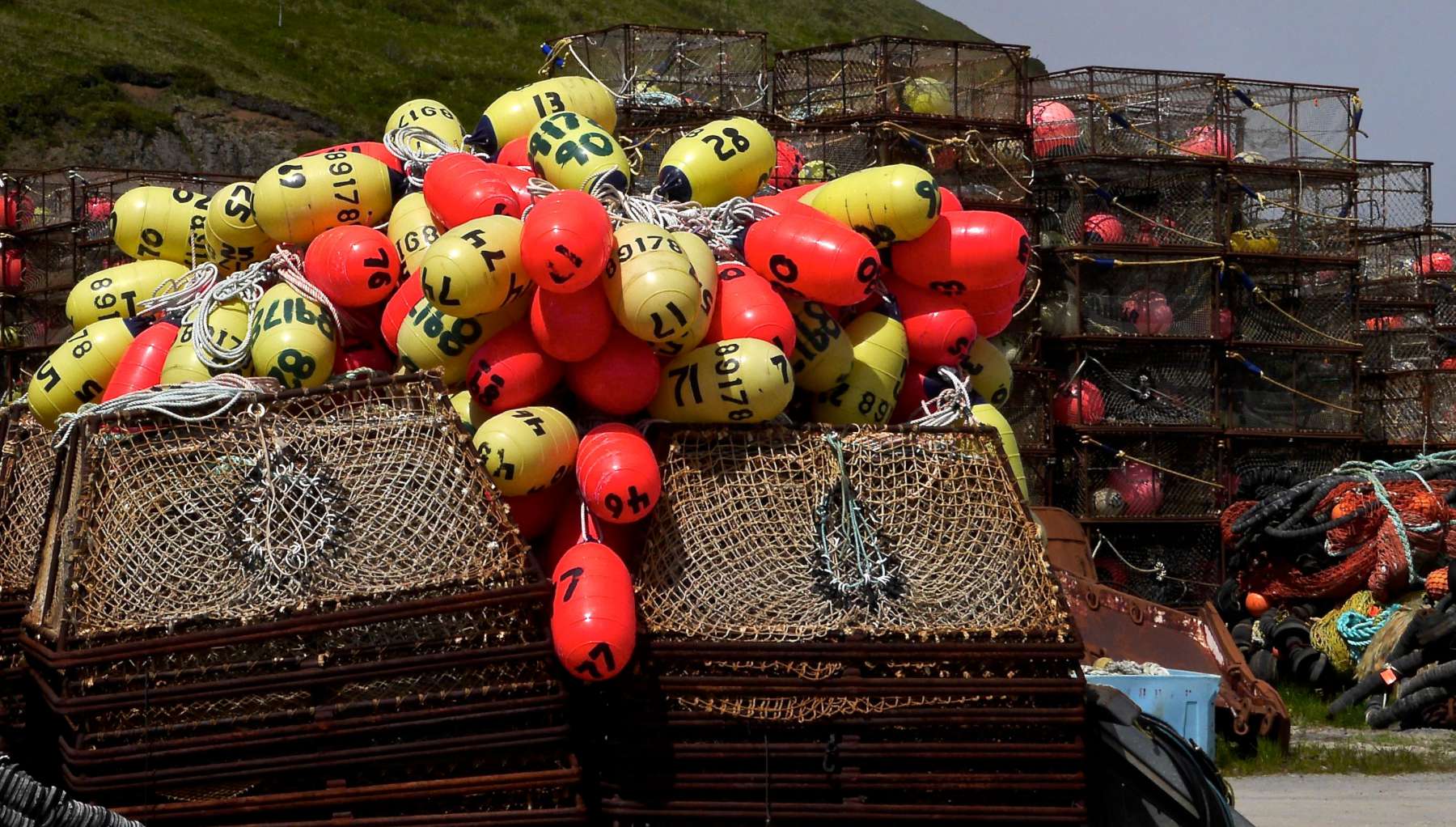 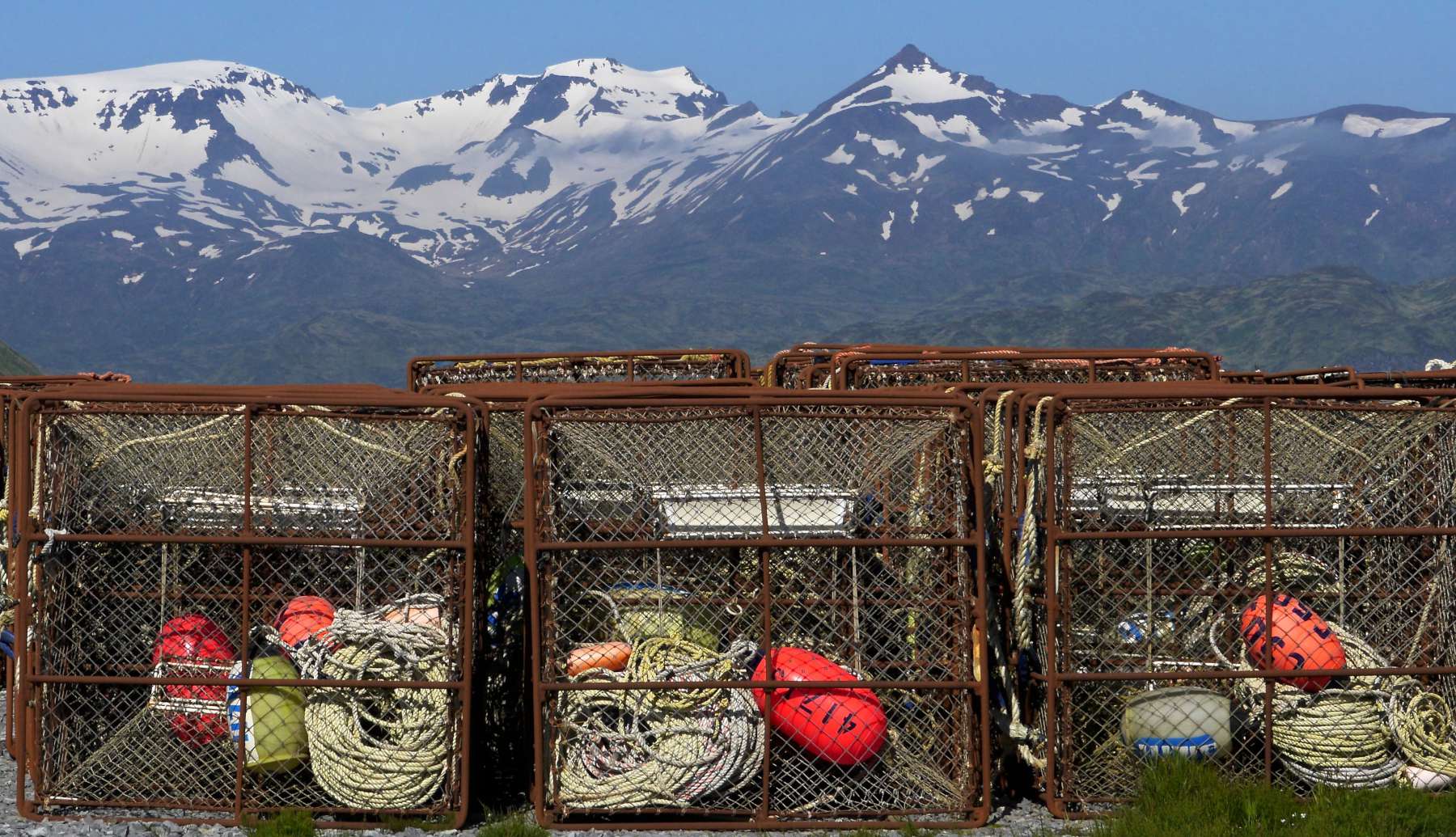 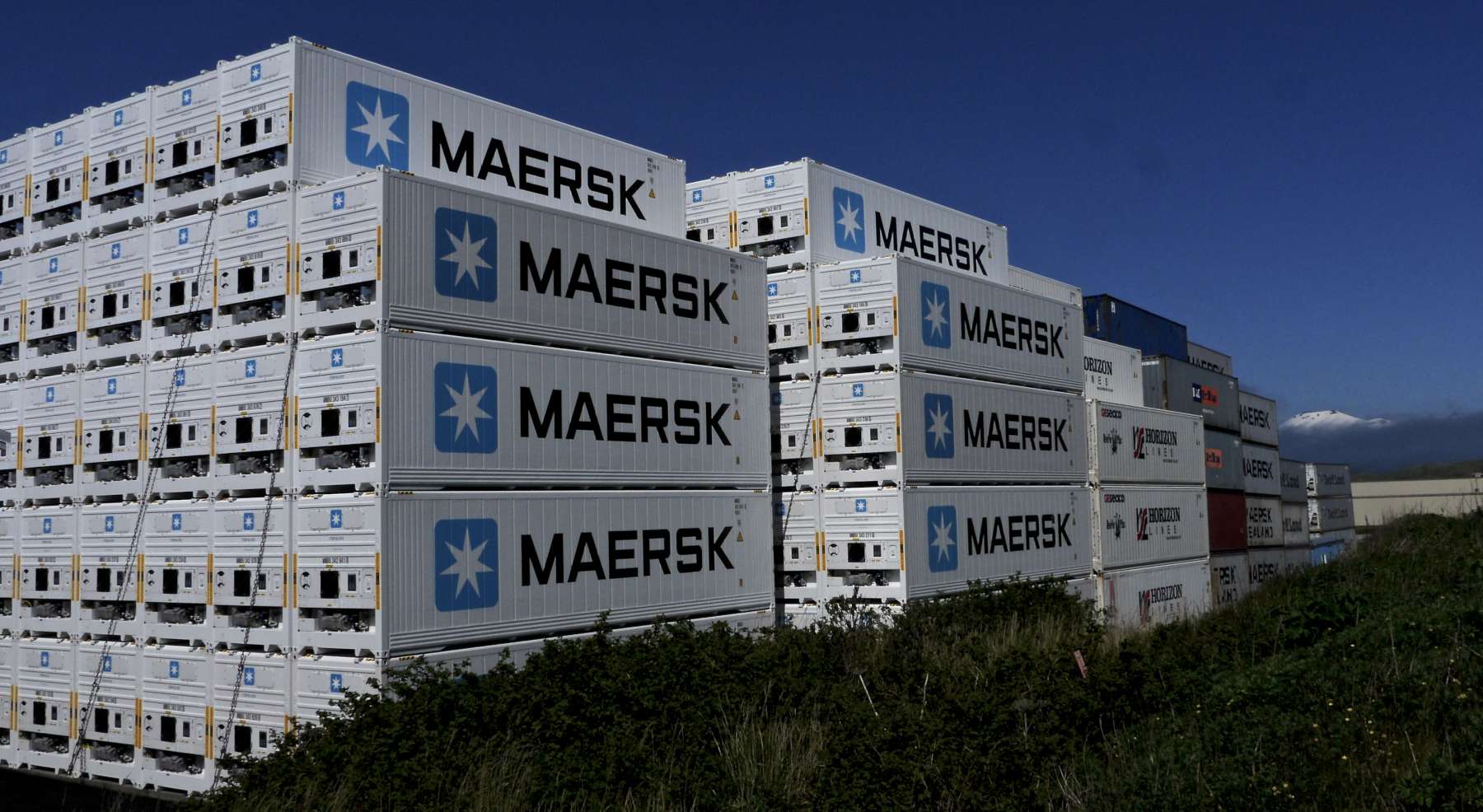 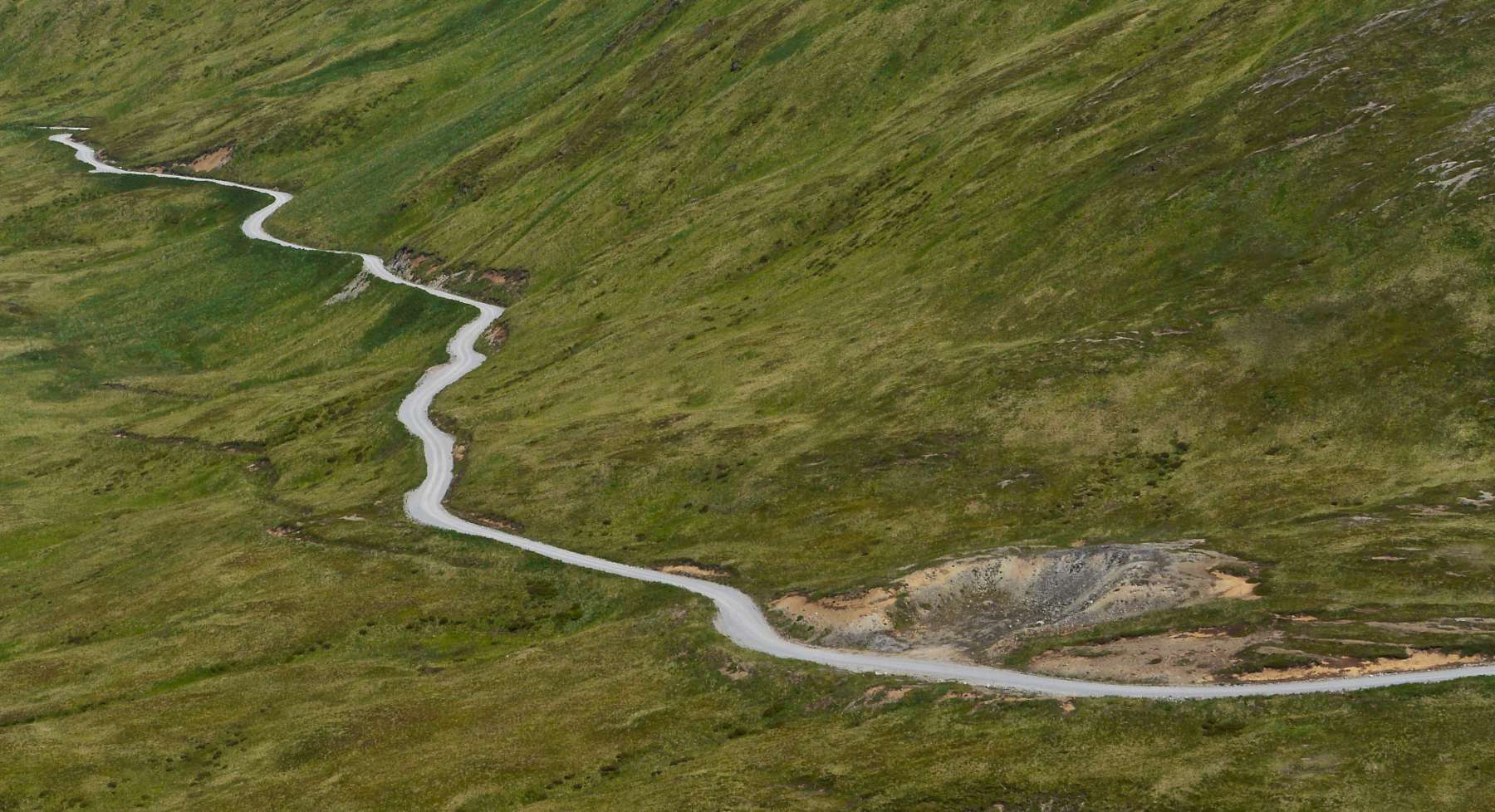 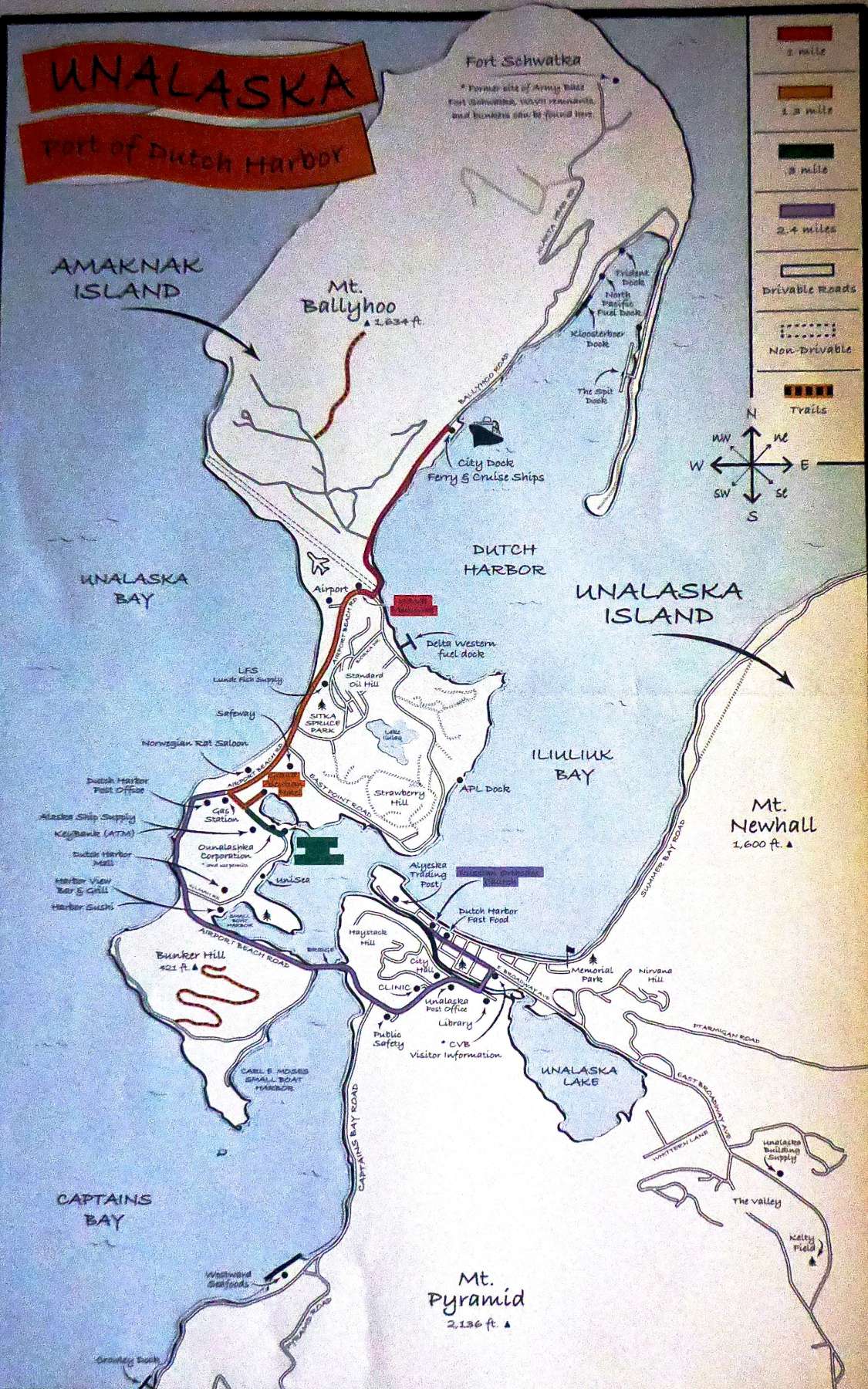 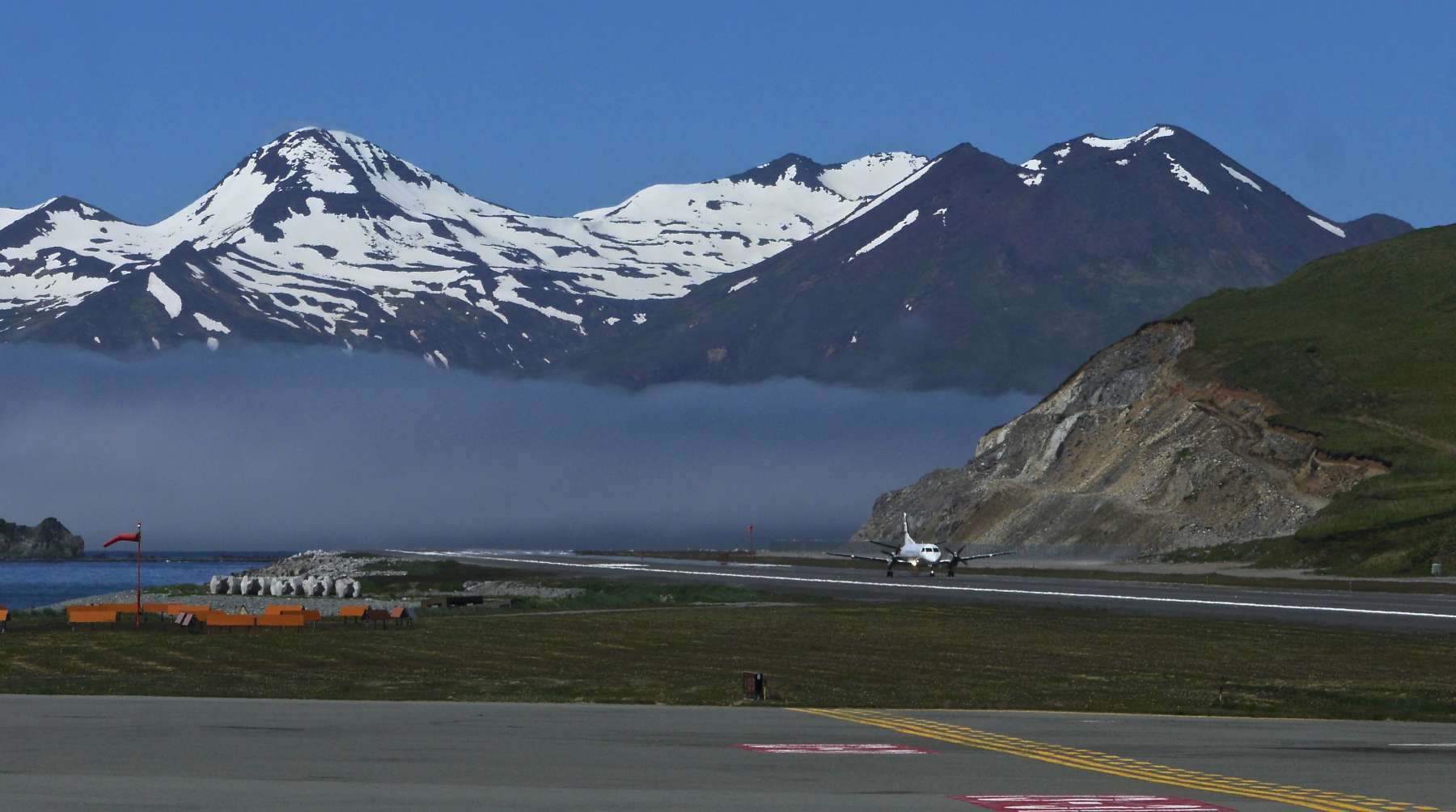 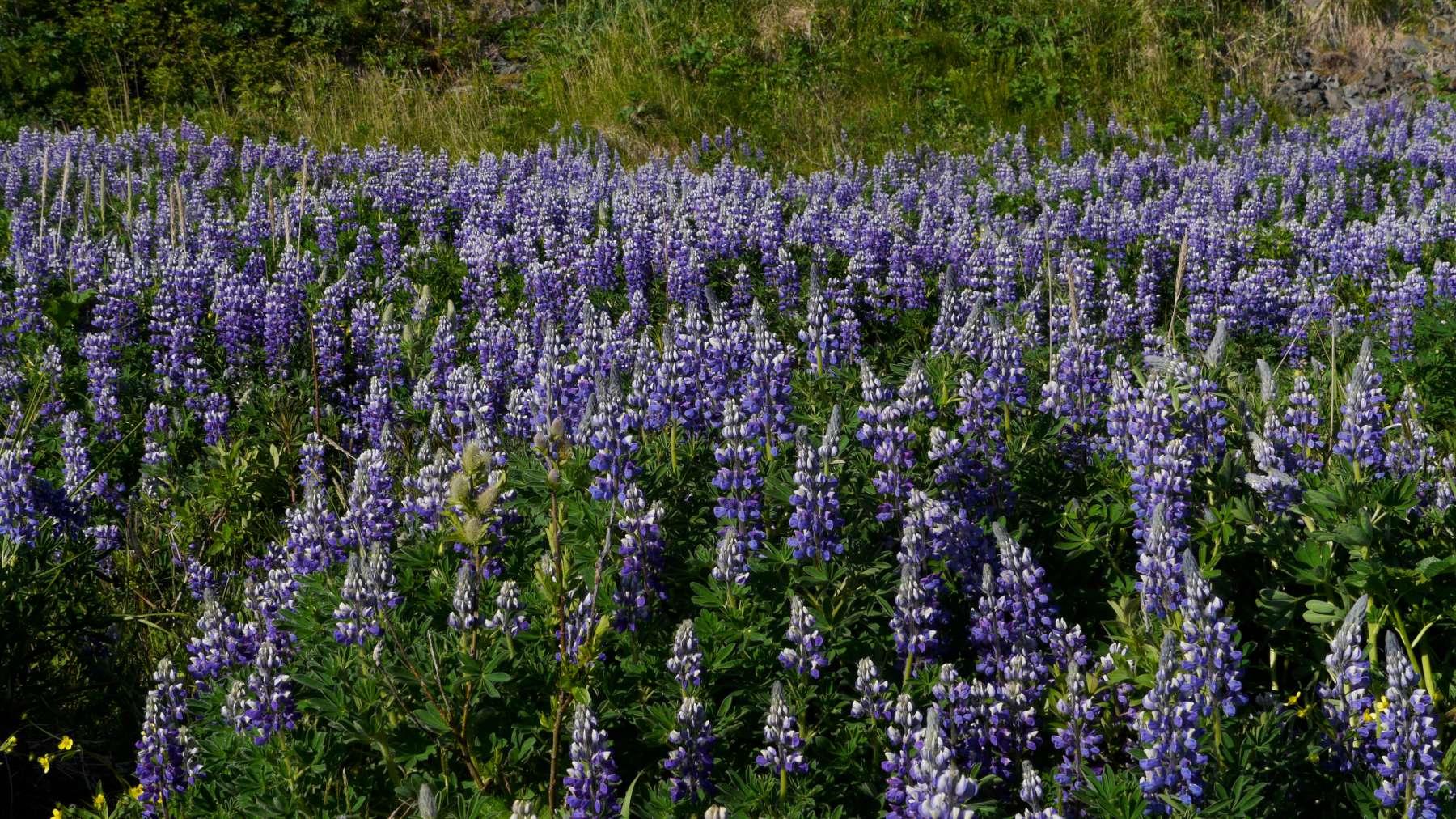 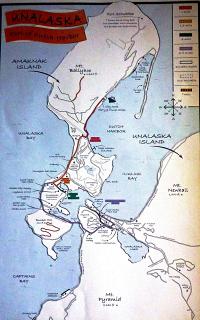 The marina where we are moored is quite a hike to town so the harbormaster kindly takes Chris, George and Christine to the car hire place to rent a vehicle while I remain on the boat to catch up with my journal and these blogs. The weather is so exceptional that, as soon as they return, we go for a drive. We go first to Fort Schwatka on top of Ballyhoo Mountain (1634 ft) and take photos of the remains of WW2 fortifications in the form of extensive bunkers and massive circular foundations for huge guns. The view is amazing in every direction. Ballyhoo was fancifully named by Jack London during a stay at Dutch Harbor, locale of The Sea Wolf

We soon come to realize that this town is actually called UnaLaska and Dutch Harbor is just that part of the harbor contained within the spit of land on Amaknak Island. Most of the commerce is on this island which is connected to the big island of Unalaska by a bridge identified simply as "the bridge to the other side". There is another small harbor on Amaknak called the Small Boat Harbor which is off Iliuliuk Harbor sandwiched between Amaknak and Unalaska Islands. The marina in which we are moored is in South Channel, Iliuliuk Bay - off Captain's Bay - and is called Carl E Moser Marina. It is just four years old and very modern and strongly built. It is really intended for big commercial vessels and has only 3 phase power.

From here we drive across the bridge to Unalaska Island where we visit the Russian Orthodox Church. In the evening we go for an excellent dinner at the Grand Aleutian Hotel.

We awake to another stunning day. We drive into town and visit Alaska Ship Supply - a huge, modern and well-equipped store containing food, clothing and equipment of all types where George photographs me holding a huge shackle. As I wrestle it back onto the shelf a passing customer asks us whether we are from Venture. When we admit to this, he says that I must be Tony Fleming. Startled, I ask him how he has figured that out and he said he had seen the boat when he had driven past and recognized the name. He has a friend in Washington State who has a Fleming 55 and loves it. This is always nice to hear!

After leaving the store we drive around town taking photos of things that take our interest including the mind-numbing stacks of refrigerated containers waiting to be filled with millions of salmon. We have lunch at Amelia's cute restaurant with its funky interior décor. Before coming on this trip, George had contacted the major of Dutch Harbor and, despite being Sunday, she comes to visit the boat this afternoon. She is an attractive lady who has lived here for many years and been mayor for 12. She also has a job with one of the freight companies. She answers all our questions very frankly and we learn much about the town which is certainly very different from the image one gets from certain TV shows. The town is clearly a serious working town based on the fishing industry but it is clean and there is no graffiti anywhere. She tells us that the schools produce some of the best results in the state - if not the country.

We go to the Grand Aleutian Hotel again for dinner, partly because, apart from Amelia's, it is the only restaurant open on Sunday and also because George fancies King Crab legs.

George leaves this morning to return home and Chris takes him to the airport which is right in town with its 3,999ft runway. We try to get an adaptor to convert the 3 phase power supply to single phase 50 amp but no luck - even though we were able to do this in Kodiak. I also try to connect to the internet without success as the system would not allow me to sign up. We later go to the library to try to connect but it is so slow as to be virtually useless. I can see that I have 54 e-mails and who they are from but cannot download them to read their content. Fortunately - and predictably - all but four of them are garbage.

After lunch we do some rough planning between now and when we have to be back in Sand Point to pick up our next visitor on July 3rd. From the outset we had planned a possible visit to the Pribilof Islands but were already beginning to have doubts about the wisdom of doing this and we now make a final decision not to go to there. We have learned that there is no such thing as a two-week weather window in the Bering Sea even in the summer time. The seas can be very rough and there is a strong risk that we could be stuck there, unable to leave, for weeks which would destroy the rest of our schedule including our intention to leave Kodiak by the end of July after which the weather can start to deteriorate. On the other side of the coin there is much to see around here. We conclude that the downside risks are not worth the potential limited rewards. So this will be our farthest point west at 166 degrees 52 mins - farther west than Honolulu. We are only a few days away from the summer solstice and it stays light for much of the night but here, at 53 deg 33 mins, we are much farther south than we were in Prince William Sound and only a few miles north of London.

The fog did not lift until much later today so have been lucky with photos for past two days.

After the fog lifts we go for a drive out into the hinterland. We take Summer Bay Drive along the extreme edge of the coast and then up an un-named wiggly road with a couple of switch backs to a summit where we stop to admire the view. A steep descent takes us down to connect with Overland Drive. We stop by the Memorial Park where there is a shaft and propeller from the S/S Northwestern - sunk during WW2. The only trees here have been brought in and planted by people so bald eagles nest wherever they can find a convenient spot - which is often close to human activity. There are even signs saying "Danger. Eagles Nesting". We were warned not follow one's natural instinct to look up if they dive bomb you. Instead, look down and bow your head to protect your face.

After two months, what little hair I have left has become very unruly and today I find a barber and have it cut back while Chris and Christine make a start on re-provisioning for the next stage of our trip. There are two big supermarkets here which make this easy. They are used to provisioning the huge fleet of fishing boats with their large and hungry crews.

After lunch we visit the Aleutian WW2 Museum, located in an original meteorological building next to the airport. It contains much interesting information about the battle of the Aleutians and the treatment of the native peoples both by the Japanese and the Americans. While we are there we see a passenger plane loom out of the mist and land on the adjacent runway

In the evening we go to the Grand Aleutian hotel for their weekly all-you-can-eat seafood buffet. My main target is King Crab legs and my only complaint is that the supplied plastic extraction tool is very inefficient. I do better using the wrong end of a teaspoon! After dinner we go for a drive around Iliuliuk Bay in which the marina is situated. We come across an amazing assembly of eagles. We estimate between 20 and 30 including both adult and immature birds. They allow me to come within fifteen feet without them showing any signs of being concerned by my presence.

I am writing this blog on the day before we take our leave from this interesting and surprising place. Every day has started with low mist and calm conditions. During the day the mist has dissipated but not entirely disappeared as it sidles across the water and moves back and forth over the landscape. By the afternoon there is sunshine and usually a brisk wind blowing across the harbor. The wild flowers are beginning to bloom - especially the blue, white tipped, lupins which favor this type of climate and which we saw in large numbers in Iceland.

Tomorrow morning we will refuel and start to retrace our route back to Kodiak - making a few diversions along the way. The blog photos and even text for this - and the previous two blogs - are being mailed from here because of not being able to use the e-mail for this purpose. My next blog will be from Kodiak around the end of July.