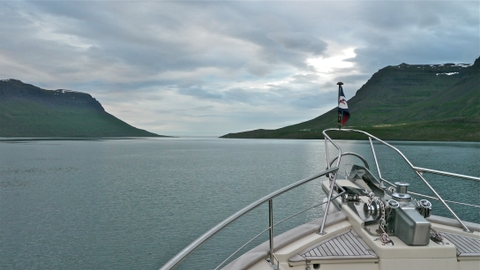 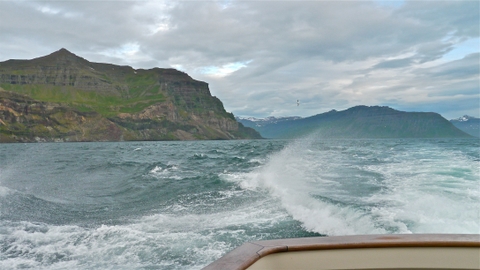 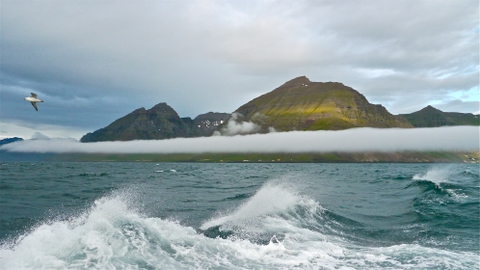 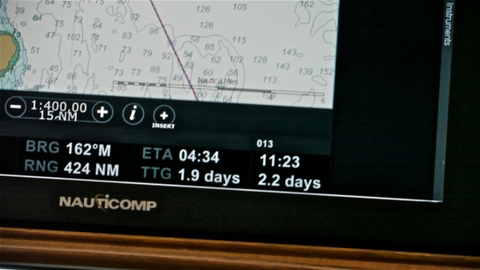 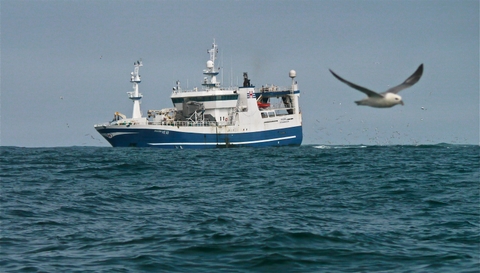 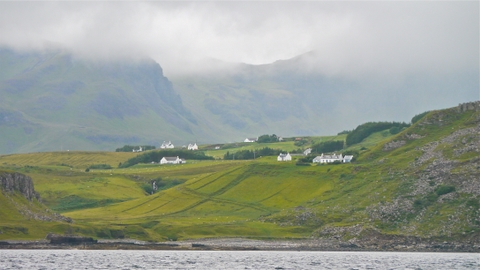 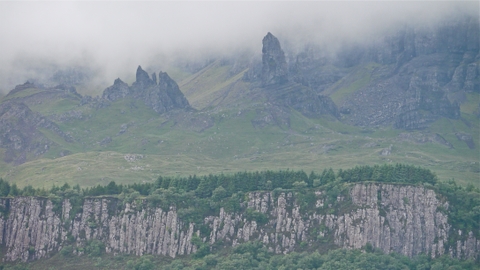 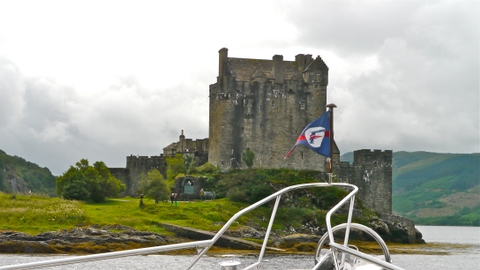 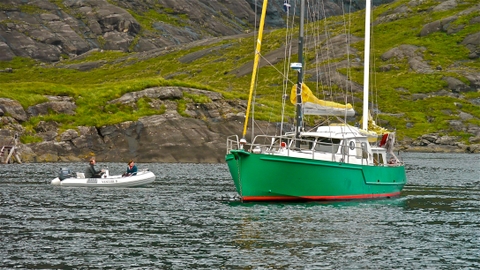 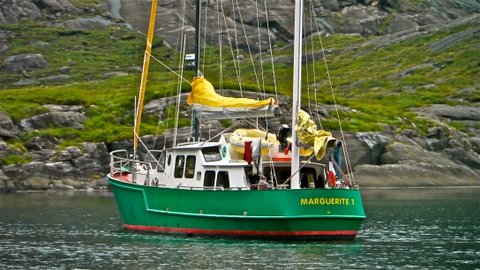 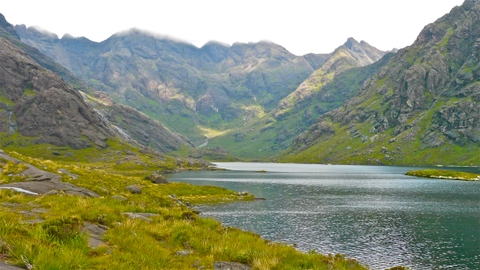 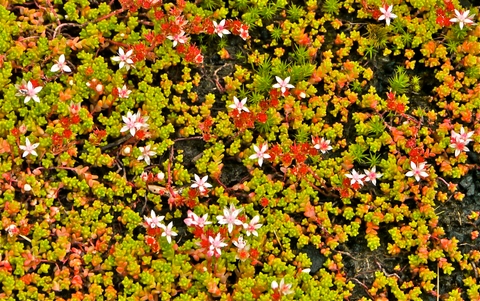 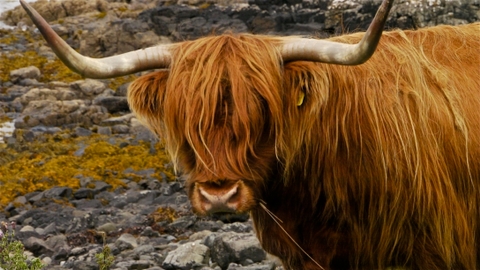 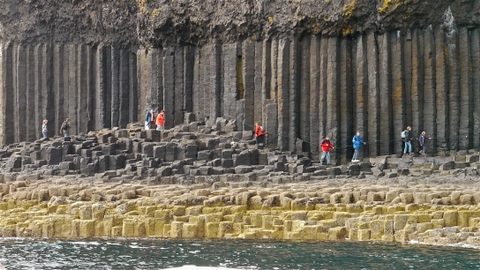 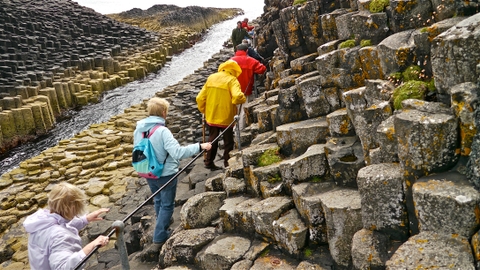 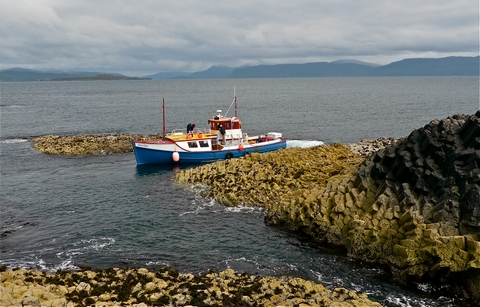 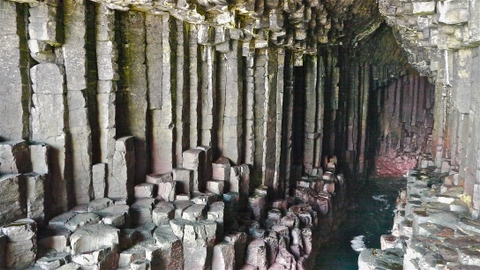 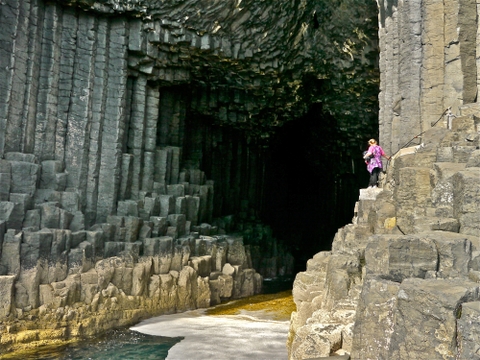 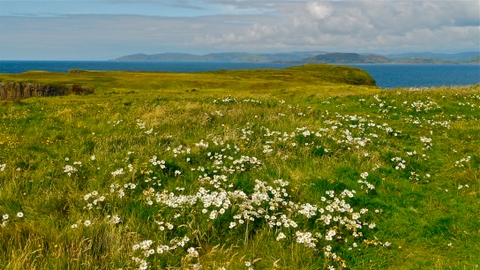 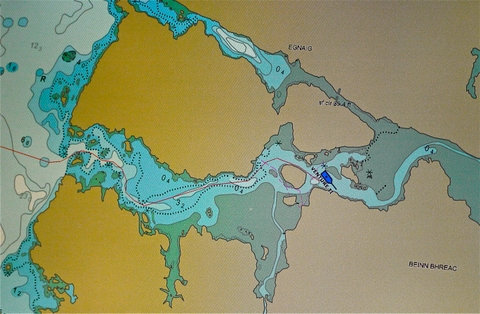 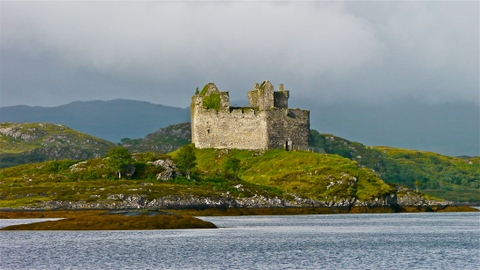 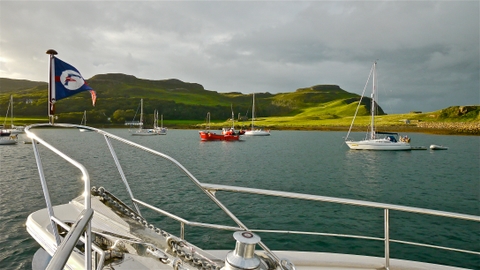 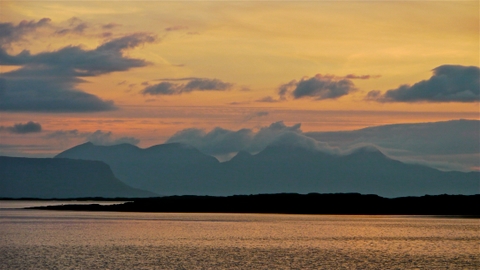 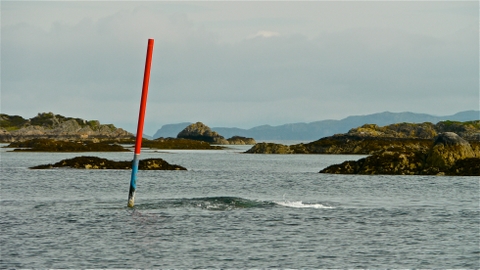 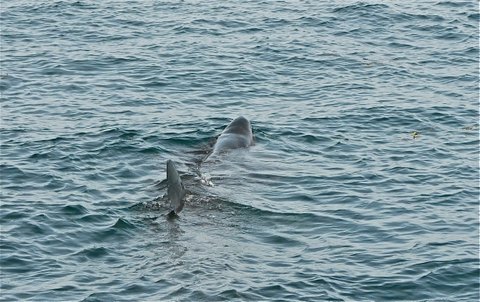 Venture II Heads Back To Scotland

I ended my last blog by saying we had decided to make a direct passage from Seydisfjordur on the East Coast of Iceland to Stornoway in Scotland. On July 24th we were underway by 0440 in mirror calm conditions, but as soon as we left the protection of the fjord the wind grew in strength to raise whitecaps, and the sea water temperature was only 6.6 degrees C. A horizontal line of mist hung like a skein of grey wool along the line of cliffs defining the coast.

Fog soon closed in behind us and hid the land. It was patchy with occasional breaks that allowed the sun to break through and turn the sea to silver. But these were short lived and soon more fog rolled across the water to envelope us once more in its clammy embrace. There were few moments when we were without an escort of seabirds - usually fulmars and occasionally gannets skillfully skimming the waves before disappearing once more into the vast expanse of the ocean.

We encountered a few fishing boats including a large trawler similar to the one we went aboard in Vopnafjordur. A tanker traveling a knot or two faster slowly overhauled us. The AIS said she was bound for Swinoujscie; ETA four days from now. Where on earth is that? It sounded Polish. I looked it up. It was - at the head of the Baltic. I am always struck by the emptiness of the oceans - just a few vessels ploughing a furrow across vast distances with a handful of humans aboard inhabiting their own small worlds. There is something mesmerizing and soporific about watching the sea as the waves march inexorably across the horizon.

At 0142 on the morning of July 25th we crossed our outgoing track at 62 degrees 26.265 minutes North, 9 degrees 56.25 minutes West - effectively completing our circumnavigation of Iceland. We have covered 1370 miles since we were last at this exact point on the globe at 2230 on June 18th.

By 7 am the next morning we were fifty miles west of the Faroes and slightly more than halfway to Scotland. We spotted a life ring in the water and stopped to retrieve it. The writing was hard to read but appeared to say Island Ranger and possibly Nassau. We later informed the coastguard in Stornoway and they came to collect it.

I stayed up beyond my watch that night to watch for the lonely sea stack of Sula Sgeir. The night was the darkest we had experienced in weeks but the horizon could still be discerned. I watched the loom from the lighthouse become the sharply defined pulsing light and could just make out the outline of the rocks against the sky. I briefly glimpsed a large full moon through a break in the clouds and even a couple of stars. This was our first land since departing Iceland 430 miles in our wake. I was sorry that we could not see this outpost in daylight because it too is a remote gannet colony.

We entered Stornoway harbour at 0840 local time after 51 hours underway. We were told that the pontoon we had used previously was occupied but might be available for us later in the day. We later found out that it was in use by Her Majesty, the Queen of England who was cruising the Western Isles in a ship called the Hebridean Princess. She left mid morning and we were able to move to 'our' pontoon!

We had traveled slightly faster than our normal passage-making speed and averaged 9.86 knots for the 501 nautical miles burning 1.71 USG (6.5 liters) per mile including that used by the generator. We still had 940 gals, or more than half our fuel, remaining.

Over the next few days we visited many of the places we had most enjoyed on our way north and were also able to catch some of those we had missed. At the junction of Loch Alsh with Loch Duich we passed by the ramparts of the famous castle on Eilean Donan which dates from 1230 AD when it was built to protect the surrounding area from the marauding Vikings. Passing through the Kyle of Lochalsh we had the tide behind us and our speed over the ground increased from 9.9 knots to 15.4 with no increase in engine rpm.

We anchored in Loch Scavaig - our favourite anchorage in the Hebrides - in the shadow of the famous Cuillins on the southern shore of the Isle of Skye. This time we had a clearer view of the surrounding mountains and we shared the tight anchorage with three sailboats. One of them, named Marguerite 1, was French-flagged and of an unusual design. I jokingly remarked that for all we knew they had just arrived from Iceland. Little did I know! We invited the crews from all the boats in the anchorage to visit VENTURE which resulted in a convivial evening and the serious depletion of VENTURE's booze stocks.

The owner who came over from Marguerite 1 was none other than Monsieur Joubert of the naval architects Joubert/Nivelt who have designed many well known boats including the Swift powerboat for Beneteau and the catamaran America's Cup challenger for Dennis Connor. He said that he had designed his own boat to allow him to visit remote places. He especially loves to push his way through ice and the hull was 12 mm thick aluminium. He has been to some amazing places including Scoresby Sound and Ammassalik in East Greenland. He has also taken the boat to Svalbard north of Norway and even to Franz Josef Land at 80 degrees North! As for Iceland? He said that that was just a place on the way to Greenland! He told us that for two months in every year he goes off to distant places in his boat and that this was a tradition which cannot be broken!

He told me that he was a great admirer of Flemings and said that our boats were the defining boats of their type, which I felt was quite a compliment coming from a designer of his stature and experience.

The following morning we went ashore and hiked around the shores of Loch Coruisk. It was very soggy underfoot but the scenery was stunning with the first of the heather beginning to bloom.

We revisited the delightful small town of Tobermory which was another of our favourite spots. From here we rented a car and drove to Ulva Ferry on the island of Mull from where we took a tour boat across to the small island of Staffa. We had visited Staffa twice in VENTURE on our way north but had been unable to land on both occasions because of rough seas. Staffa is famous for Fingal's Cave and was visited by the composer Felix Mendelssohn in 1829. His visit to the island and the sounds of the ocean waves booming within the cave prompted him to write his Hebridean Overture. We had come to the conclusion that the only way to achieve a landing was to take a tour boat because the jetty area is ringed by rocks and, even on a calm day, subject to considerable surge.

After a one hour trip our helmsman threaded his way between jagged outcrops and offloaded us all onto the stone jetty. Once ashore we walked along rocks where the upper surface had been coated with a non-skid material and a plastic-coated cable had been installed as a handrail. It was well done, practical and unobtrusive. This part of the island is made up of hexagonal basalt pillars formed 60 million years ago, which have been carved by the actions of the sea into cathedral-like caves of which Fingal's Cave is the most famous. The ceiling was especially striking and hard to believe that it is entirely the work of nature. It was a memorable experience and a real privilege to have finally been able to visit this special place and well worth the effort of getting there.

We walked back towards the landing place and climbed steep steps up the cliffs to the top of the island where there were wonderful views over the surrounding islands. The weather at Staffa was beautiful with blue sky but it clouded over on our way back to Mull.

Over the next few days we visited Loch Moidart on the mainland which required careful navigation to negotiate the tricky entrance. Deep within its heart was ruined Tioram castle on its own tiny island within the loch. We headed offshore to the four so-called Small Isles (which are not in fact so small) but have names you cannot forget: Canna, Muck, Eigg and Rum. This is an area especially noted for sightings of Minke Whales and Basking Sharks. We caught a glimpse of but one Minke but saw numerous basking sharks which are huge and can grow to 9 meters (30').

I am writing this at anchor in Loch na Ceall just off the village of Arisaig. I am surrounded by mountains and wooded slopes and in the distance I can see the misty outlines of the Cuillins on Skye. For some reason we have been spared the voracious biting midgies for which the highlands of Scotland are infamous. It is a peaceful spot but tricky to enter. The guidebook describes it as one of the most intimidating entrances of any anchorage on the West Coast. The Admiralty West Coast Pilot goes even further: "this tortuous channel being full of rocks, is dangerous to enter, and as the islets in the vicinity are low and inconspicuous they are of no assistance in fixing the position of the vessel." However, things are now much less fraught than described. For one thing we now have GPS and accurate electronic charts and another is that red and green navigation poles marking the channel - known locally as 'perches" - have been renewed and new ones established by Arisaig Marine.

It is now August and the height of the cruising season: sailboats are abundant but powerboats of any size are few and far between. This is an exceptionally busy anchorage; I can count 45 sailboats and just 5 powerboats. We spent two nights in the anchorage in Canna and were the only powerboat among 19 sailboats. I was delighted to see so many boats - many with children on board and more than a few from Europe - especially from France and Holland. But powerboats are conspicuous by their absence. It is true that you need a well-built boat with a reasonable range because fuel supplies are few and far between but I am surprised that there are so few powerboats out there taking advantage of the wonderful cruising. Of course sailboats are great and provided me with my early knowledge and experience of boating but the wind is often too strong or too weak and frequently in the wrong direction. Combine this with strong tides and a sailboat can spend quite a lot of the time under power. It is also nice to be able to keep dry when the weather turns nasty - or dreach as they say up here.

We are now within three weeks of the end of this trip and our electronic chart is a spider's web of red lines recording our meanderings through the Hebrides. But we still have unfinished business. I have yet to celebrate my birthday on the Isle of Jura where my Great Grandfather was born 175 years ago and there remains over 700 sea miles to go, including the Irish Sea and the infamous English Channel, before we reach Southampton and the point of departure from which we set out four months ago. For many that would be a major event but for us it is just a postscript to an amazing journey.