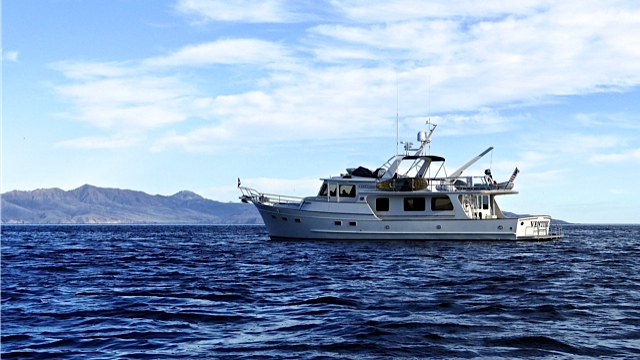 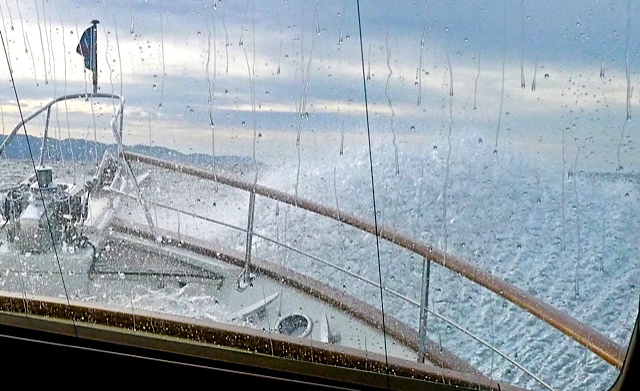 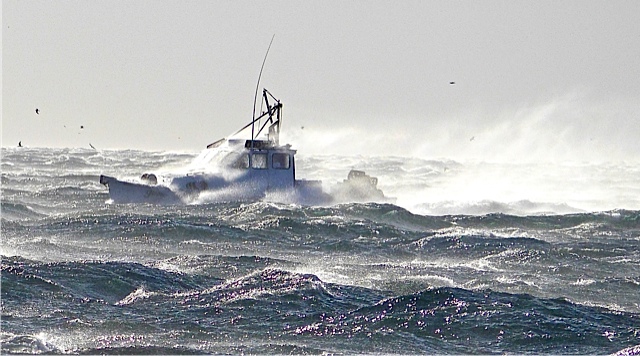 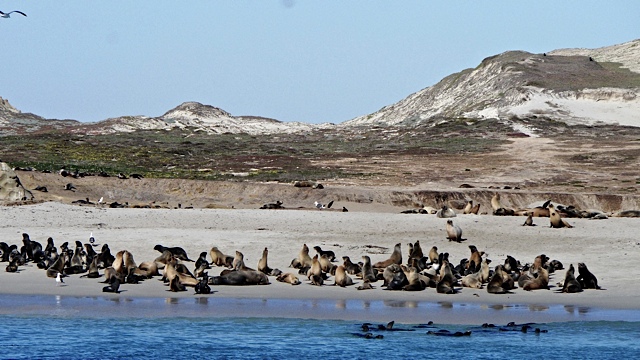 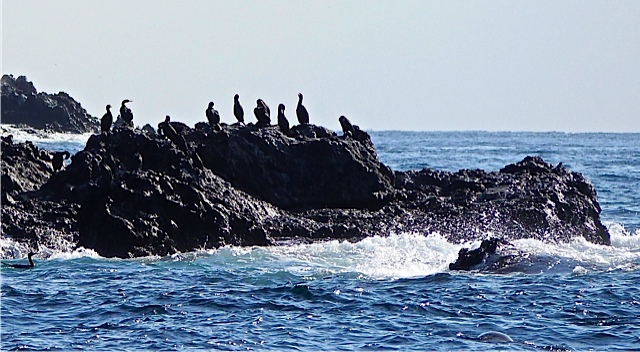 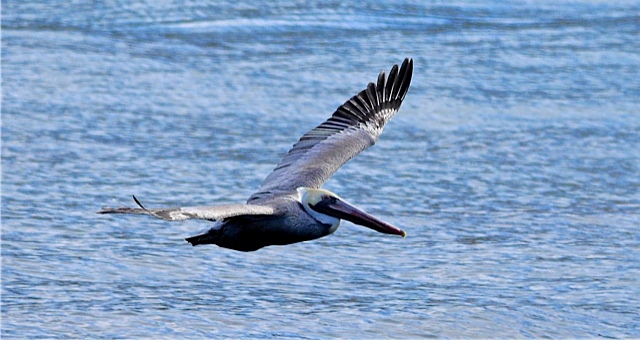 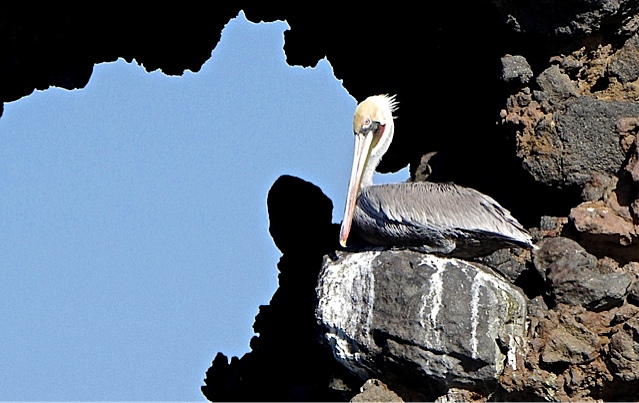 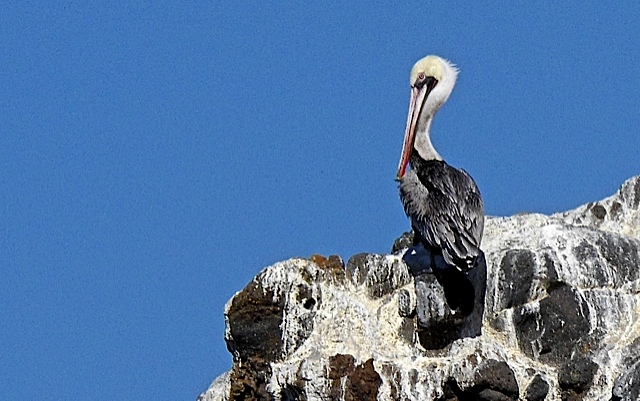 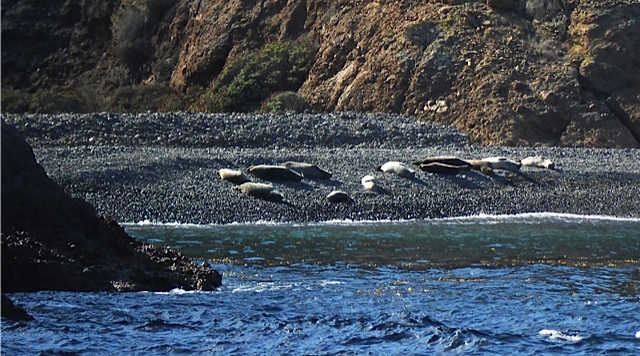 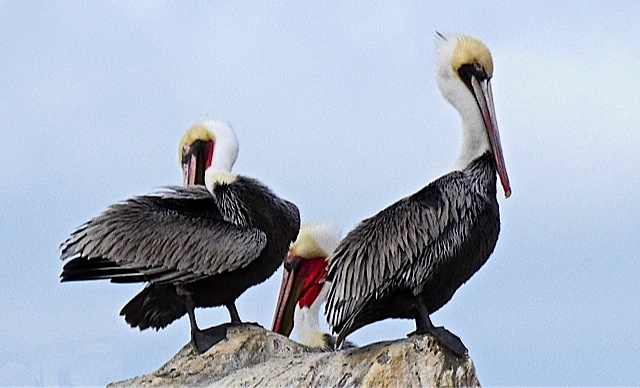 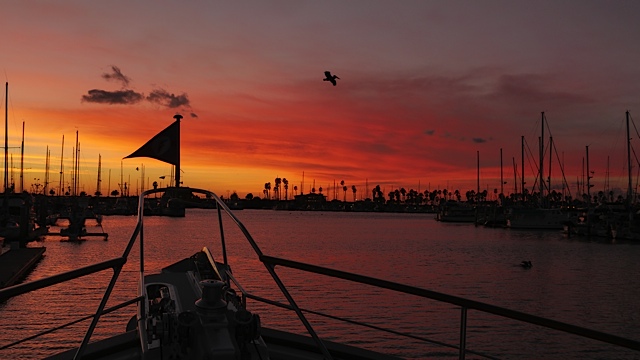 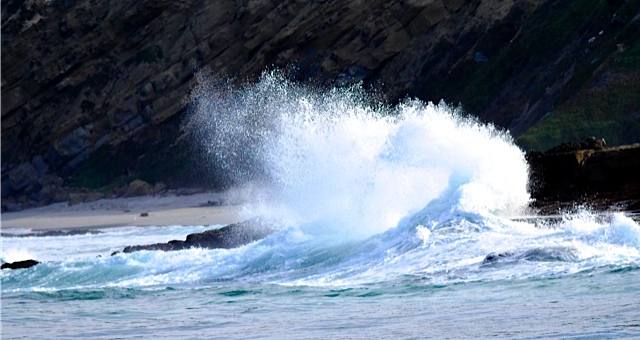 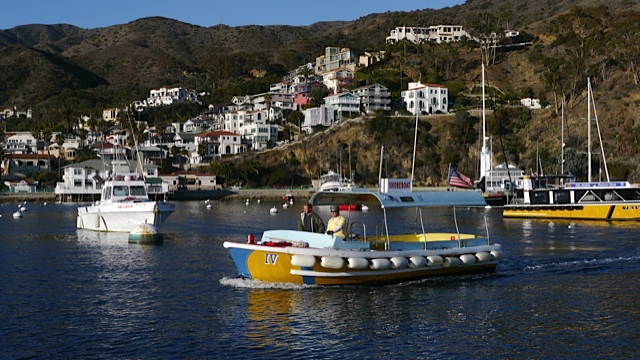 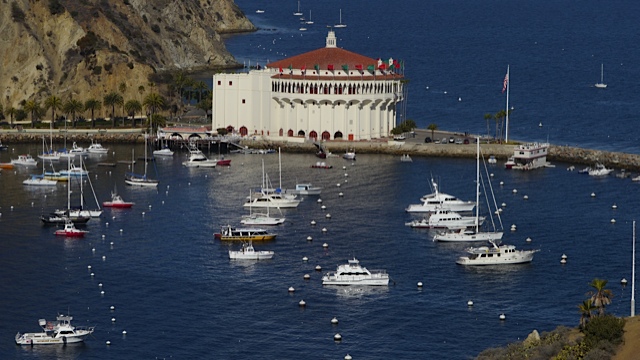 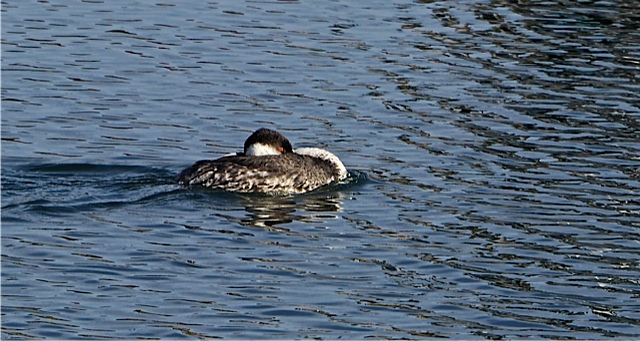 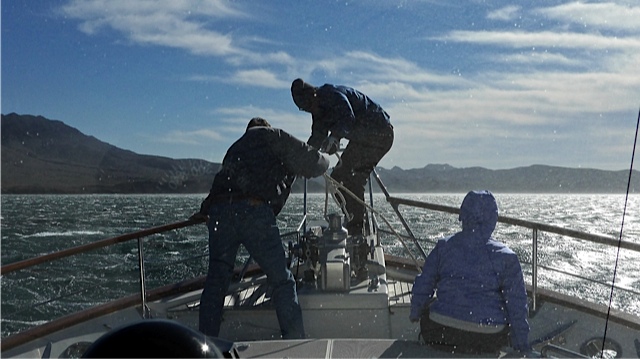 After a summer spent exploring Prince William Sound in Alaska, Venture is now enjoying the balmier climate of Southern California. This year, between April and September she traveled an additional 5,200 nautical miles - bringing her total to around 45,000 since being commissioned in January 2005.

We have just returned from an unusual voyage of exploration in local waters. Just 20 miles offshore from the vast metropolis of Los Angeles, lie four uninhabited and protected Islands that comprise the Channel Islands National Park. Although so close to the mainland, they are remote and often hard to reach due to rough and unpredictable weather.

This was certainly borne out in our case and the trip was not at all what we had in mind when we planned it. We postponed our departure from Newport Beach for two days due to a gale warning which would have made the our 100 mile journey to the islands very uncomfortable bashing into head seas. The waters en route are over 3,000 ft deep.

After an overnight stop at the more southerly island of Catalina we took a quick look at the natural rock arch on Anacapa Island before continuing to Ventura harbor on the mainland where we had time to visit the Channel Islands Visitor Center before we picked up Peter Jenssen who had flown over from Connecticut to write a story about our trip to the islands. Another gale warning was forecast so the following morning we headed out figuring out that we had about 24 hours before we had to scuttle back to the protection of Ventura harbor.

We passed by the sliver of Anacapa, which is really three islands divided from each other by narrow rock-strewn gaps, before going on to circumnavigate the largest island of Santa Cruz. The sea was quite boisterous so we were not able to come close to the Painted Cave - billed as one of the largest sea caves in the world and large enough to accommodate Venture in calm weather. One of the difficulties in cruising these islands is the lack of protected anchorages. Most are open bays and subject to ocean swells and wind waves which can often be in opposition to one another. We spent the night in Smugglers Cove and left in good time the following morning to return to Ventura to wait out the gale. The weather was still OK although the radio continued to broadcast dire warnings.

The onshore winds finally arrived during the afternoon and reached 30 knots even within the harbor. We rented a car and drove into the center of town where there was a street market in progress. The winds had subsided by the following morning but we delayed our departure until noon in hopes this would give the waves time to subside. The weather forecast now began to warn of strong Santa Ana conditions. This is a local phenomenon where inland winds - from an altitude of 5,000 ft - scream down and rush offshore reaching speeds of 70 mph. These were forecast to arrive the following afternoon so we figured we had time to reach an anchorage which would give us protection.

Once outside Ventura harbor we found the waves still had plenty of muscle and were right on the nose so we had a rough trip with sheets of spray deluging the boat. It was a relief to tuck into Forney Cove at the Northwest corner of Santa Cruz Island just as the sun was setting at 4.30. An offshore reef with rocky outcrops provided some relief from the ocean swells and we figured the island would provide protection from the Santa Ana winds when they arrived. The cove was thick with kelp which can interfere with anchoring but we dropped the hook in a spot which appeared clear.

Chris decided to sleep in the salon so he could keep an eye on the situation and said that hearing the engines start would be a call to action. I slept in the forward cabin and awoke just after midnight realizing that the situation had changed. The slight rolling motion caused by the ocean swells had stopped and been replaced by the sound of water rushing past the hull. I could hear the shriek of the wind. I was just pulling on my jeans when I heard the engines start. The Santa Ana's had arrived with a vengeance several hours in advance of the forecast and the anchor was beginning to drag through the kelp. Chris, Christine and Peter went on deck to handle the anchor while I tried to maneuver Venture in the strong winds now blowing between 30 and 40 knots. We have had a FLIR thermal imaging camera installed on Venture since the boat was new and now, for the first time, it really came to prove its worth. I was clearly able to see the crew on the foredeck and the hand signals that Chris gave me as to the direction of the anchor chain. We were able to re-anchor and this time the anchor really held.

We then set about unzipping the Bimini cover from its frame. In the strong wind it was like a wild beast and it took the full efforts of all four of us to tame it and bring it under control.

The strength of the wind continued to increase until it reached 60 knots. The sea surface was whipped into a froth with streaks across its surface and spume was spun into the air with glints of rainbows from the emerging sun. A couple of small fishing boats came in seeking shelter. One of them appeared as a shadowy silhouette barely visible through plumes of spray which enveloped the boat and streamed off its stern like the tail of a comet.

The anchor held steadfast but then, with a loud bang, one of the lines we were using for a bridle snapped. The reef, which had protected us from the ocean swells, was now a lee shore too close for comfort and it was time to move. With the other three crew members out onto the foredeck I tried to follow Chris's hand signals and keep the boat in line with the anchor chain but, even with the combined effects of the engines, rudder and bow thruster this proved almost impossible given the strength of the wind. The result was that the well-bedded anchor was finally wrenched clear with the chain at an acute angle which bent the shank of the anchor but, finally, we were clear and headed out of the bay. Amazingly, once away from the island, wind speeds dropped to 20 knots so, far from providing a lee, the island had actually scooped down the winds and funneled them right at us!

We headed now to Sam Miguel, the outermost of the islands. Normally this island bears the brunt of the weather but, in the case of a Santa Ana, the offshore winds are mostly a spent force by the time they reach its rocky shores. Despite the calmer winds, the ocean swells remained a factor and it was not easy to find a calm anchorage. With its bent shank the main anchor was useless and, after lowering it into the tender, it was disconnected from the chain and moved aft to the cockpit. We now had to use our secondary anchor which was lighter and had a combination of rope and chain so we were in for a rather rolly night.

The following morning was bright and clear with little wind and we rounded the northwest corner of San Miguel to Adams Anchorage and Tyler Bight where there were literally thousands of elephant and other seals lolling on the beach and hanging out in the water. We made sure not to go too close and disturb them. That day, in glorious weather, we continued on to Santa Rosa where we anchored in Becher's Bay.

It was time for us to return and, as Peter had never visited Catalina Island, we headed directly for this more southerly island accompanied, en route, by a several groups of Pacific White-sided dolphins which sported in great numbers around the bow. We pulled into the delightful town of Avalon looking as if it belonged in the south of France than off the coast of California. We went ashore for dinner and found the streets almost deserted during the off-season.

The following morning we were fortunate to be lent a golf cart by a long-term local resident to tour the twisty roads above and behind the town whose houses scramble up the steep hills surrounding the harbor. Regular vehicles are only allowed on the island by special permit and are few in number.

At noon we were underway for Newport Beach twenty miles distant over calm seas. We had covered an additional 440 nautical miles to be added to our summer total. It was not exactly the trip we had planned but one full of surprises and interest.