The Story Of Venture I - Part Eight 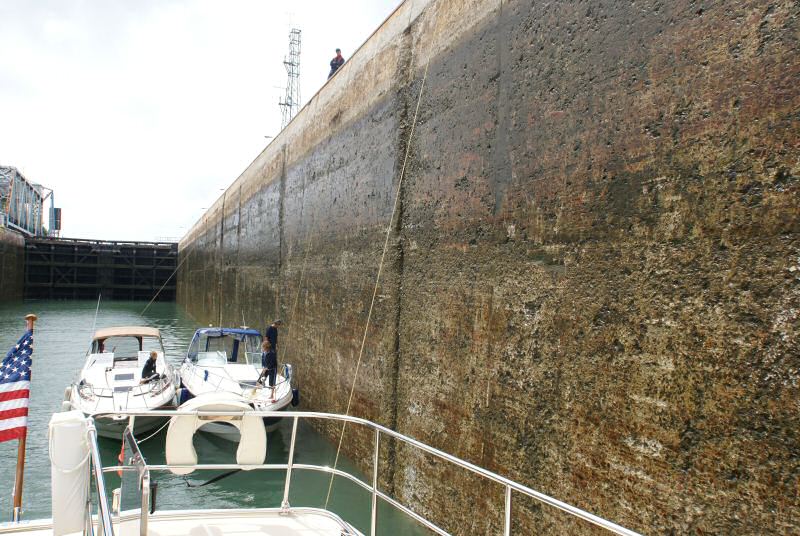 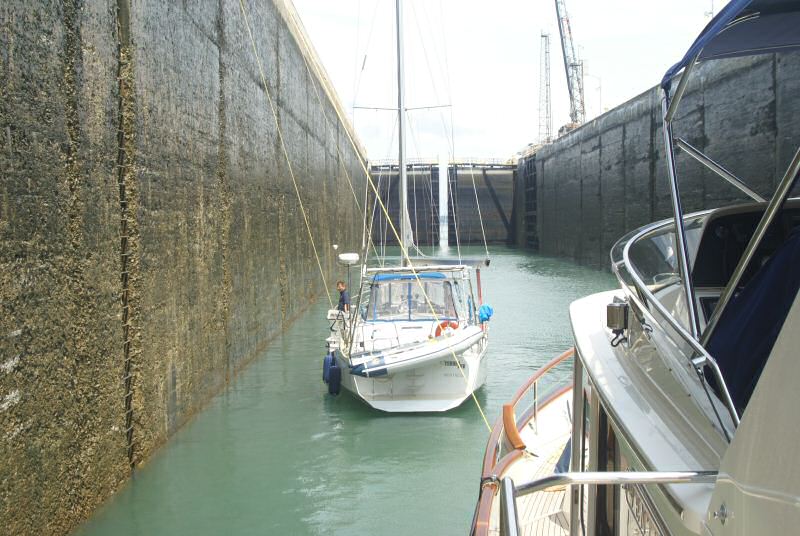 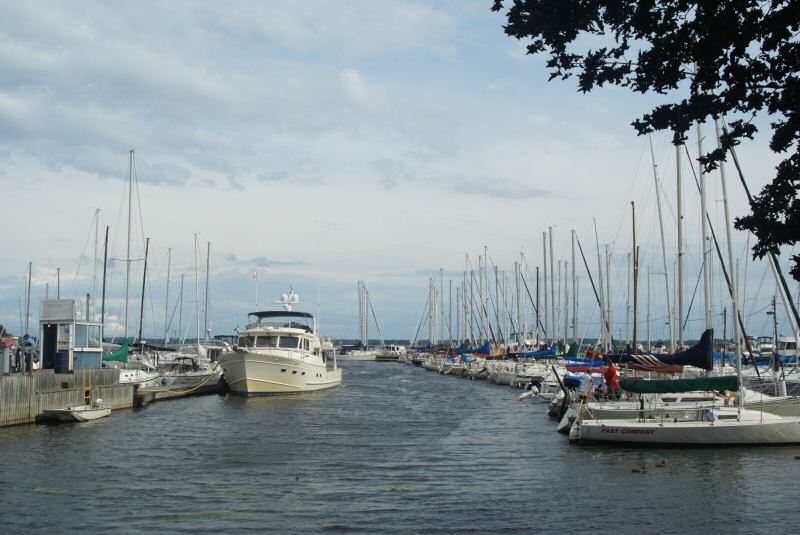 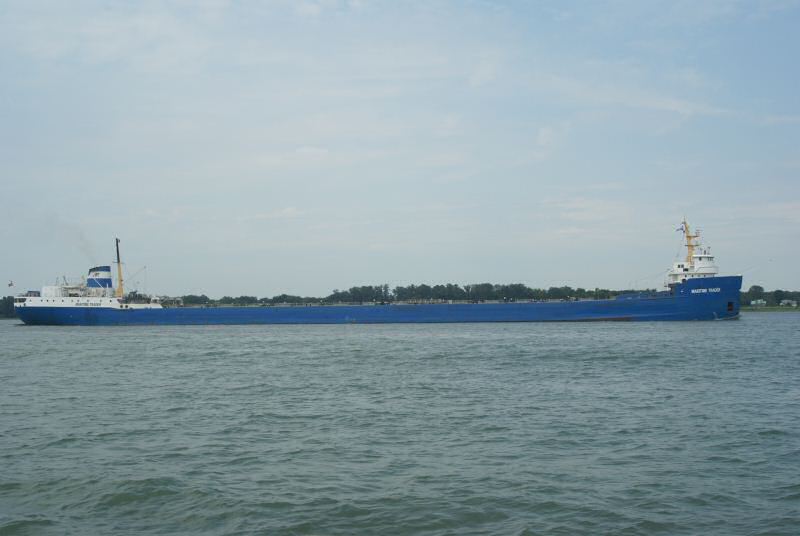 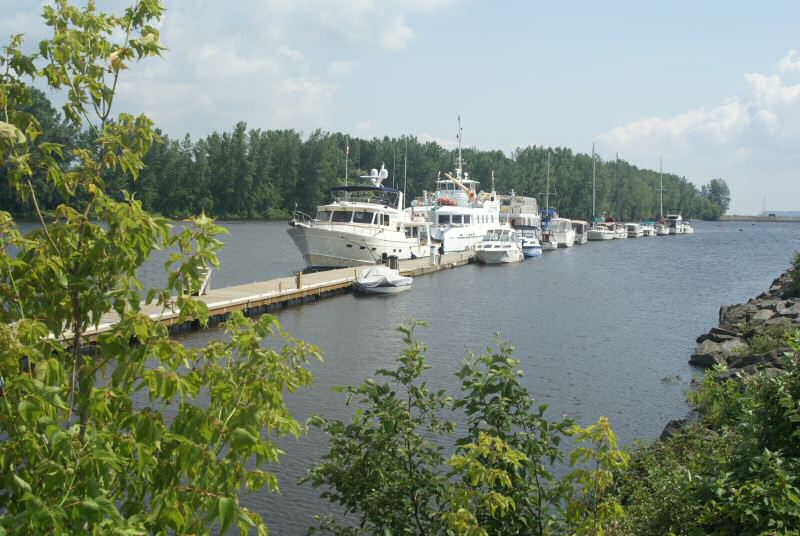 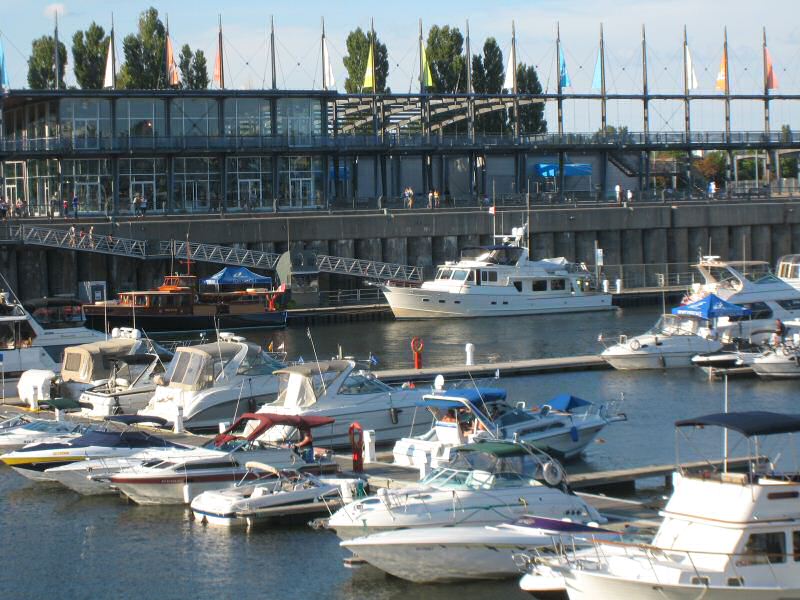 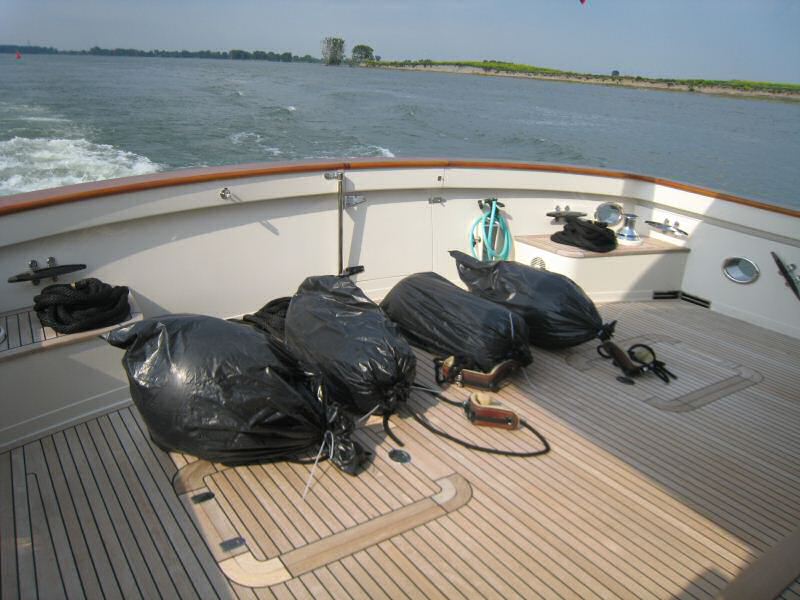 The western shore of Manhattan Island is divided from New Jersey by the Hudson River which provided the first leg of our overland route to the Great Lakes. The Hudson River is named after Henry Hudson, an Englishman who was hired by the Dutch East India Company in 1609 to search for a short cut to the Pacific. The native Indian name for the river translates as "the river that flows both ways" - an apt name as the Hudson drops only 1/8" per mile and could more accurately be described as an estuary for, being tidal right up to the Federal lock at Troy, 130 miles upstream, it does indeed ebb and flow both ways.

The Hudson valley and river have for millennia provided a transportation highway, first by the Native Americans and then, much more recently, by Dutch, British and French explorers soon to be followed by their military who skirmished endlessly with each other and with the local Indian tribes. Roads and railways tend to follow the rivers and, today, railways follow both banks of the Hudson. Ocean-going freighters also navigate the Hudson although we saw little commercial traffic and even pleasure boats were few and far between.

Initially, the view from Venture was of docks, cruise ship terminals and apartment buildings on both sides of the river but the urban environment dropped astern surprisingly quickly and gave way to a more rural landscape. The river was wide but, as with the ICW, it was still necessary to stay within the channel as shallow spots lie in wait for the careless just beyond the markers.

We passed by the town of Yonkers and under the wide span of the Tappan Zee bridge before crossing the 2 mile wide stretch of water of the same name - a legacy of the early Dutch explorers from the days when the present day New York had been purchased for trade goods valued at $20 and was named New Amsterdam. We passed the military academy of West Point on a high bluff which, had we not known otherwise, could easily be mistaken for a grim and forbidding house of detention. Here the river narrows to one third of a mile and is over 200 ft deep.

We spent the first night in a marina at Haverstraw and the second up the narrow Roundout Creek tied up in the very centre of the historical district in the small town of Kingston which, until it was burnt to the ground by the British in 1777, had been the capital of New York. Here we spent two nights and took time to visit the Hudson museum. Also, as we had not dropped the anchor since leaving the Galapagos, we took this opportunity, while moored in fresh water, to let out all the chain and make sure that rough seas had not tumbled it into a Gordian knot.

The third day on the Hudson we passed through the industrial town of Albany before tying up alongside the dock wall in Troy where we made our preparations for the transit of the 30 locks that stood between us and Lake Ontario. We used the davit to lower the yacht mast, mounted on the radar arch, which brought our height above the water to just below 20 ft. Having now completed the transit, I would consider this to be a maximum safe height for the Oswego and eastern section of the Erie canal but still too high for the Erie west of the Oswego junction or for the Champlain where 17 ft is more appropriate. Boats with high superstructure and deep draft are just not suitable to make this trip: Dry exhausts have some positive features but being able to fold down is not one of them. After mulling the various alternatives, we elected to use industrial-strength garbage bags to protect our fancy fenders from the often-rough lock walls. They may not look too classy but I can recommend them as being practical and certainly cost effective!

In Troy, Venture attracted a lot of attention including from the local marine sheriff who appeared in full kit alongside us on the dock and bluntly told me we would have to move. When I enquired the reason he said "because you're making me jealous!"

Above Troy the first lock is the Federal Lock on the Hudson located just below the junction where the river divides into the Erie and Champlain Canals. We took the left fork into the Erie and, after purchasing a 10 day pass for $50, commenced our climb through a series of five locks referred to as the "Flight of Five".

At this point, it might be of interest to describe some of the facts relating to the construction and early days of the Erie Canal. Work on the original canal was started on July 4 1817 and it opened on Oct 26 1825 with 83 locks from Lake Erie to the Hudson. A man and three horses could dig one mile of canal in one year. Payment was 50c per day and ? pint of whisky. The motive power for the barges was horses or mules which gave them a speed of 2.5 to 3 mph. The canal authority had 9,000 horses, 2,000 barges and employed 8,000 men. It operated 24 hrs a day and many of their customers were westbound immigrants who were charged 4c per mile which included meals and a bunk bed. In 1832, cholera, traveling along the line of the canal, killed 3,000 in 11 days. Largely due to the traffic generated by the canal, New York had, by 1833, surpassed Baltimore and become the countries biggest port.

Over the next seven days we meandered our way up the Erie to Three Rivers where we turned into the Oswega. Refining our technique along the way, we negotiated a total of 30 locks without any problems or difficulty but there is no doubt that Venture's generous side-decks made the job much safer and easier. Every lock had either tubes set into the walls or lines hanging down - sometimes both - so there is no need to use your own lines. Lock #17 had the highest lift of over 40' and we passed beneath a guillotine-style gate to enter its dark canyon walls.

It is virtually impossible to judge clearances and bridge heights by eye and only one (the lowest) had height markers. With just 12" clearance beneath the lowest bridges, we had some anxious moments as we crept beneath their massive steel spans.

At the small town of Amsterdam the area around the dock was in a festive mood with a variety of stalls selling mostly food and a succession of groups playing lively Hispanic music. In the evening, an excellent symphony orchestra played to a large gathering and, in the gathering dusk, a fireworks display brought the entertainment to a close. We had a fine view of the pyrotechnics but Venture was alarmingly close to the action and shrapnel from the mortars and rockets rained down on us.

At Ilion we stayed two nights so we could visit the Remington Firearms Museum and make a very interesting tour of the factory where the firearms have been made since the days of the flintlock rifle.

Much of the eastern Erie follows the bed of the Mohawk River until it dwindles to a trickle. Long stretches of the canal are very rural with dense foliage coming right to the waters edge, reminiscent of the Pacific Northwest except that these are mostly deciduous trees which lose their foliage in the winter. For much of the way it was so quiet that we could hear birdsong in the pilothouse as we slipped silently along. Mother ducks, each with a flotilla of fluffy ducklings in tow, scooted out of our way and could be seen even within the biggest locks, bobbing around and swimming serenely out when the gates swung open.

At lock #20 we reached our highest point at 420 ft above sea level and from here on every lock lowered us down. Descending is faster and quicker than going up because there is less turbulence as the water is drained out of the chamber. All the facilities within the control of the lock keepers were in excellent condition but the lock walls varied from being quite smooth to being extremely rough with holes large enough to swallow a fender as the boat lifted on the rising water. We found it best to keep the boat away from the wall if possible and having bow and stern thrusters made this much easier.

Included in the Erie Canal route is a crossing of Lake Oneida. We stopped at Mariners Landing at Sylvan Beach the night before our crossing and, for the first time, saw large numbers of pleasure boats. Most were quite small and many were pontoon boats which were ideal for a day on the water. Venture always attracted attention due to her size and business-like appearance and we chatted to many interested people most of whom asked where we had come from and who were amazed when we told them we had brought the boat from Alaska with a side trip to the Galapagos.

We were never quite out of sight of land during the crossing of the lake which is 20 miles long and 3 miles wide but, once again, it was important to follow the green and red channel markers. The guide book says that waves as high as 6' can be generated in windy conditions but for us the waters were calm.

At Brewerton, at the western end of the lake, we tied up at the Ess-Kay Boat Yard which. although, as its name suggests, is a full service yard with Travel Lift, is perhaps the nicest place to tie up that we had encountered along this entire inland route. In fact, one boater had kept his boat there for nine years! It is tough to make a living providing services to boaters because the season is so short and the canal closes in late November. However, Ess-Kay even offers the use of a courtesy car and Kim, the ever helpful proprietor, also had a small chandlery stocking essential parts and was able to provide us with Canadian charts for the St Lawrence Seaway.

After one more lock on the Erie we turned off into the Oswego Canal. At times our progress was almost dreamlike through still waters that reflected a mirror image of the forested banks. Canada geese, although not too popular with local residents due to the mess they leave behind, were common - often moving in line astern along the edges of the waterway.

We exited the last lock at Oswego at the northern end of the New York State Canal system to see ahead of us the vast expanse of Lake Ontario. Although we had taken a leisurely pace, spending two nights in different three places, it had taken us just 12 days to make the passage from New York to the Great Lakes.

Ahead lay the crossing of Lake Ontario and passage down the great St Lawrence Seaway where Venture will once again enter Canada having left that country in Vancouver ten months ago in September 2007.

Venture has now carried us over 17,000 miles with more than 7,000 of those miles in the fourteen weeks since we left the La Paz area on April 12th. From here we will follow the St Lawrence Seaway and back out into the north Atlantic en route to Prince Edward Island and Nova Scotia.

I will keep this site updated as to our progress.

Keep a look out for part 2 of the article by George Sass of our visit to the Galapagos in the August issue of Yachting magazine.