The Story Of Venture I - Part One 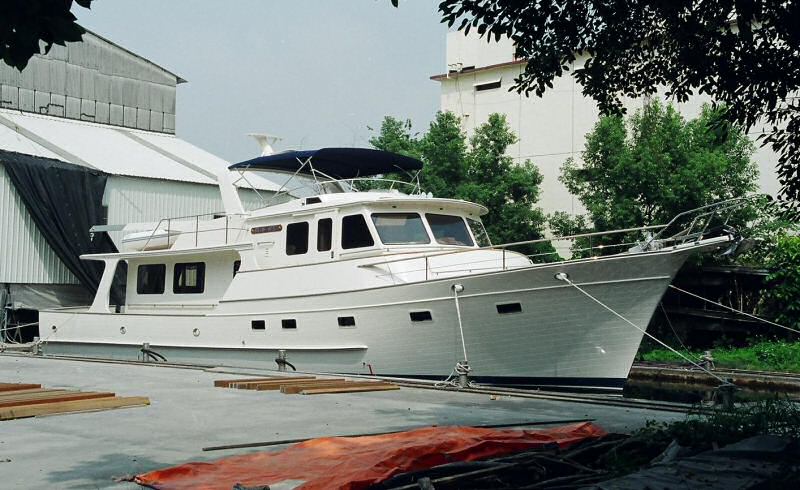 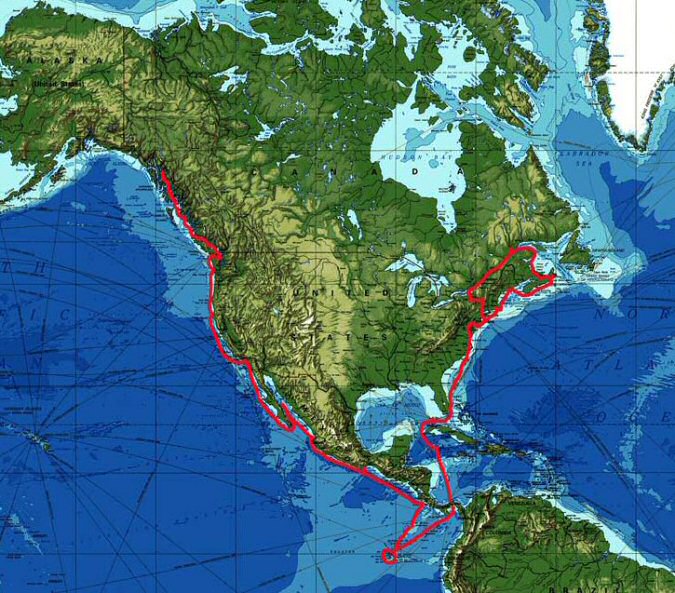 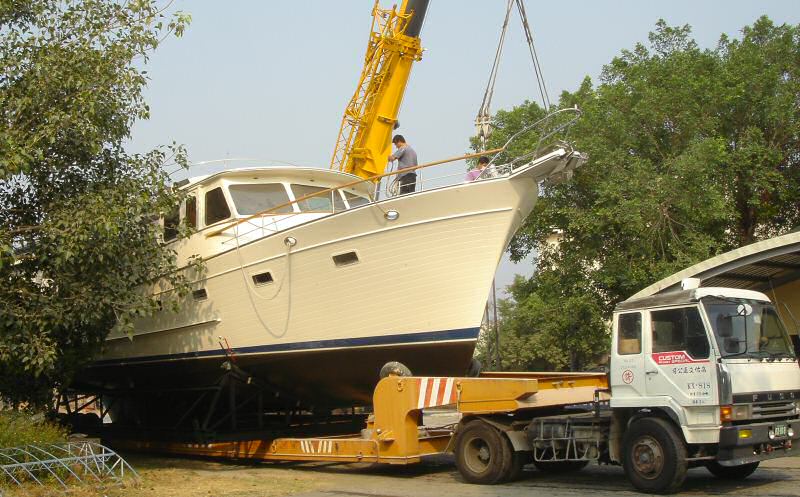 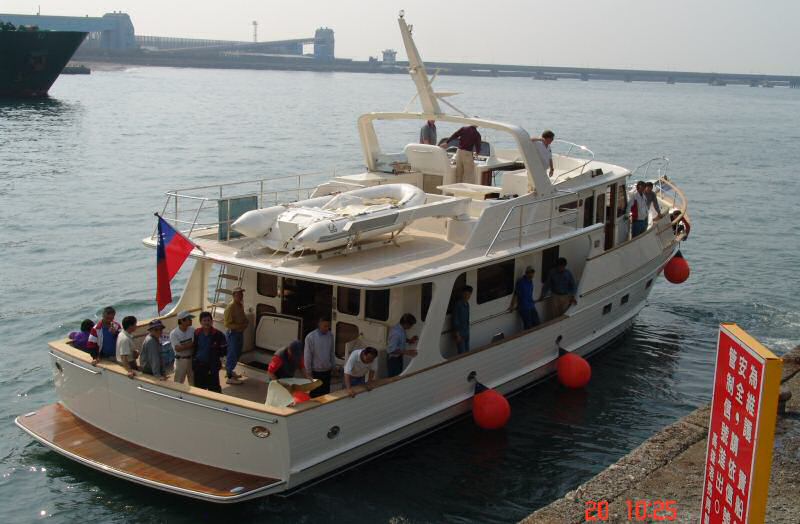 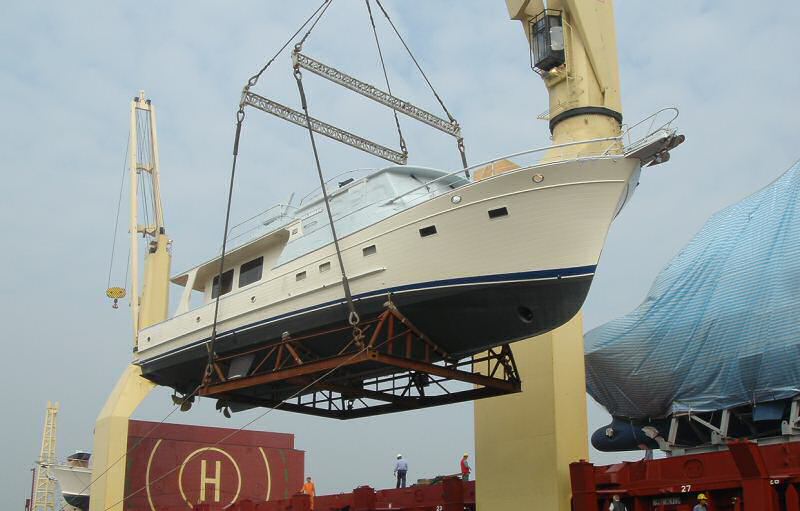 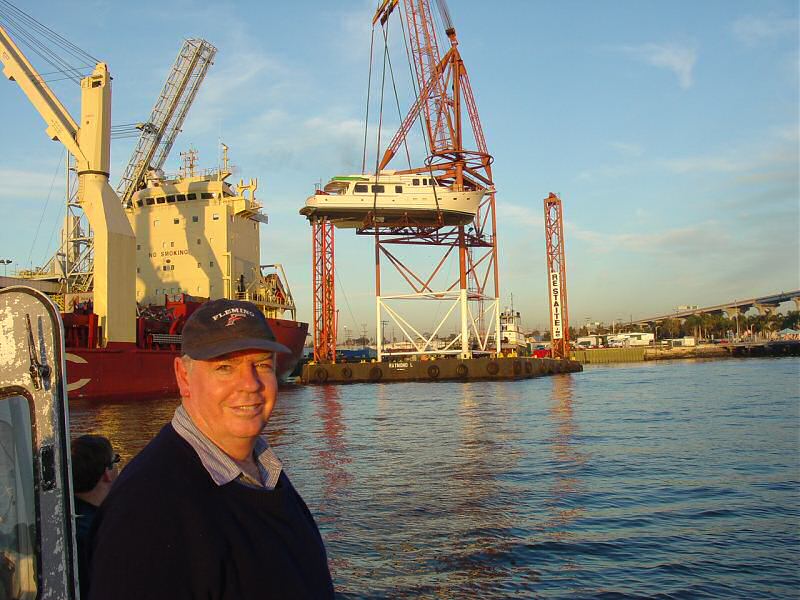 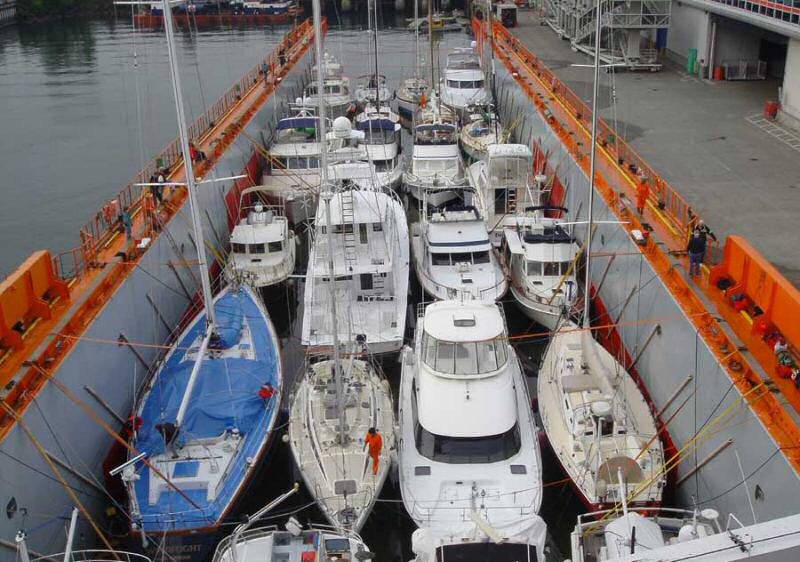 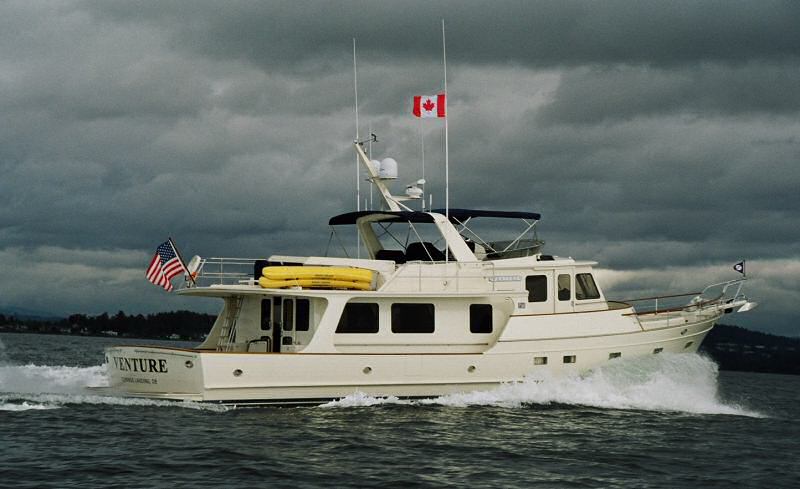 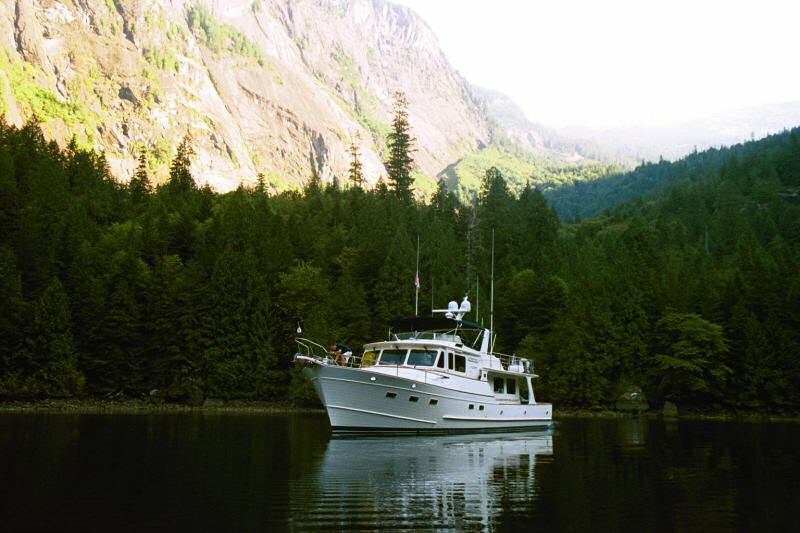 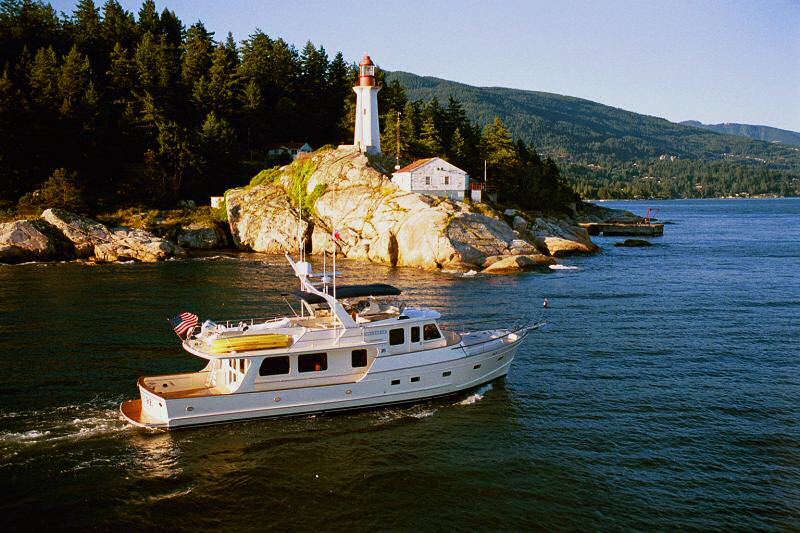 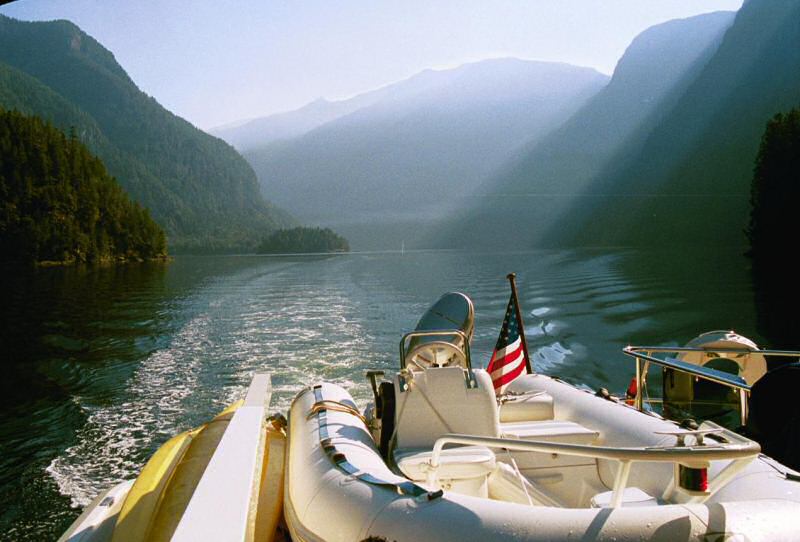 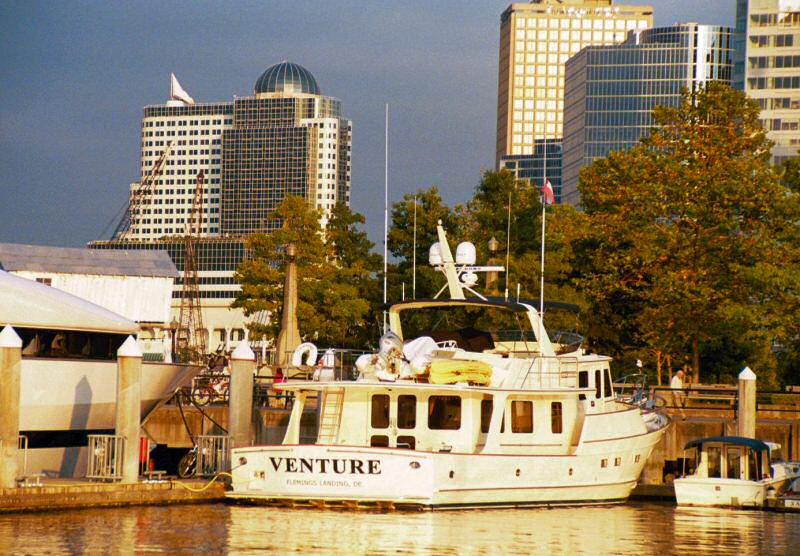 This section has been added to the Fleming website in response to interest being shown and questions asked re the progress of 65-001 Venture.

Early in the design process for the Fleming 65, I decided to retain hull #1 so that we could use the boat as a test bed for new equipment and ideas and also to expand our own experience with using the boats that we design and build.

We named the boat Venture because that is what she represented for us. She was launched into Kaohsiung harbor in December 2004 and, after seatrials in the South China Sea, she was loaded aboard a ship in Kaohsiung on Christmas Eve and shipped to San Diego. She was offloaded using a floating crane two weeks later and driven to her slip in Newport Beach. Here she was equipped with electronics and, mid April, was driven to Ensenada, Mexico, to be loaded into the Dockwise ship that would take her to Vancouver. We decided to ship her north because at this point she was a brand new design with very few sea miles under her keel and the open Pacific Ocean with few ports of refuge was not the best place for early trials.

For those who have never seen it, shipping by Dockwise is an interesting and efficient way to move boats from one region to another. The ship is ballasted down so that the central part of the ship is flooded and open to the sea at the stern. It was a Thursday when we drove Venture into this area along with 27 other assorted yachts - both sail and power. Divers were on hand to place supports under the boats as the ballast water was pumped out and the central deck rose above the water with its fleet of boats.

Four days later we flew to Vancouver and, at 0700, the following morning we congregated on the dock as the ship was re-ballasted and her cargo of yachts re-floated. A couple of hours later we were tied up at Coal Harbour Marina in the heart of downtown Vancouver just 5 days after we had been tied up at the marina in Ensenada. Venture had now arrived in her fourth country without having really gone anywhere!

That first summer was spent in becoming acquainted with the beautiful cruising waters in British Columbia. Venture was introduced to the public and the press and was photographed to prepare brochures. In early September we took her to Seattle for her first boatshow and then we drove her down the Pacific coast back to Newport Beach taking 4½ days for 1200 mile trip.

A few months later, she continued south to La Paz on the East Coast of Baja California at the southern end of the Sea of Cortez, Here she had another rendezvous with Dockwise for the trip north - this time to Nanaimo on Vancouver Island. Over course of the summer of 2006, we made the 1200 mile round trip to Juneau in Alaska - returning to Vancouver Island in August.

There had only been time to scratch the surface in Alaska and we had every intention of returning there the following year so there seemed little point in bringing the boat all the way south to California for the winter if she was just going to be sent north again in the spring of 2007. Also we were anxious to use Venture as a test bed for the new generation of common rail diesel engines which were coming on the market. So we made the decision to re-power the boat with a pair of MAN 800 hp common rail engines. Although I visited the yard a couple of times to make decisions, we delegated the re-power to Delta Marine Services who are a Fleming Authorised service centre in that part of the world.

While we were at it, we made changes to the generators, water heating system and electronics and a number of minor items as a result of what we had learned during our 8,000 miles of cruising. Many of these changes have since been incorporated into the production boats.

For various reasons, our cruising season got underway later than intended in 2007 and we never made our second trip to Alaska. Instead, we cruised the Broughton Archipelago which are a group of sparsely inhabited islands on the Canadian mainland opposite the northern end of Vancouver Island. We poked around here until it was time for us to head south to California in preparation for being one of the escort vessels in a rally of 50 boats heading to La Paz in November.

In early September, we rounded Cape Flattery on Washington's Olympic Peninsula and out into the turbulent Pacific Ocean. This time the weather was less than ideal and we had to pull into Grey's Harbor and Eureka to seek protection from storms. On this coast it is important to play it safe and seek refuge early because most ports have dangerous bars and are closed by the Coast Guard when the weather kicks up. This time we took 10 days for the journey south. Although our normal cruising speed is around 10 knots, we ran at 15 kts for several hours so that we could reach Eureka before the impending storm while it was still daylight and before an outgoing tide rendered the bar impassable. Without having the option of running at higher speeds we would have had to seek shelter much further north.

After one month in Southern California, we headed south to San Diego to join the rest of the fleet taking part in the Fubar Rally. On this occasion "Fubar" is an acronym for Fleet Underway to BAha Rally! Venture was one of the escort vessels. The cruise followed the exposed barren coast of Baja California and involved three overnight passages with stops at Turtle Bay, Santa Maria, Man of War Cove in Magdalena Bay, Cabo San Jose, Bahia Muertos before terminating in La Paz. The total distance from San Diego was 917 miles.

As I write this in January 2008, Venture is tied up in the marina at CostaBaja - with 10,000 nautical miles under her keel. In March we plan to cruise the southern part of the Sea of Cortez before taking Venture south through the Panama Canal and up the US East Coast into the Hudson, Erie Canal and the St Lawrence Seaway en route to Nova Scotia. Apart from valuable feedback obtained in the areas of technical operation and convenience of amenities, we view Venture as a mini expedition ship capable of taking us to places off the beaten track. We are currently researching a diversion to Cocos Island and the Galapagos en route to the canal.

All of the above trips have been documented in a series of videos:

These videos and more are available in the Fleming Store. (Coming Soon)