The Story Of Venture I - Part Three 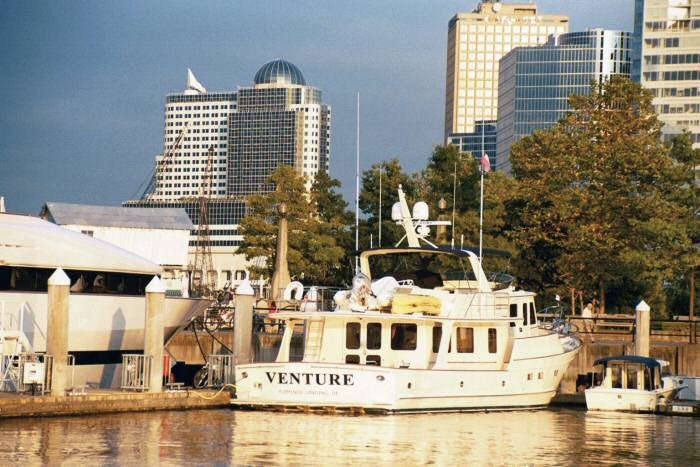 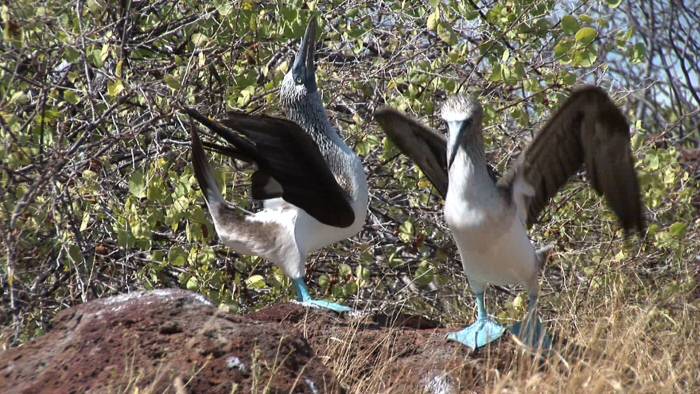 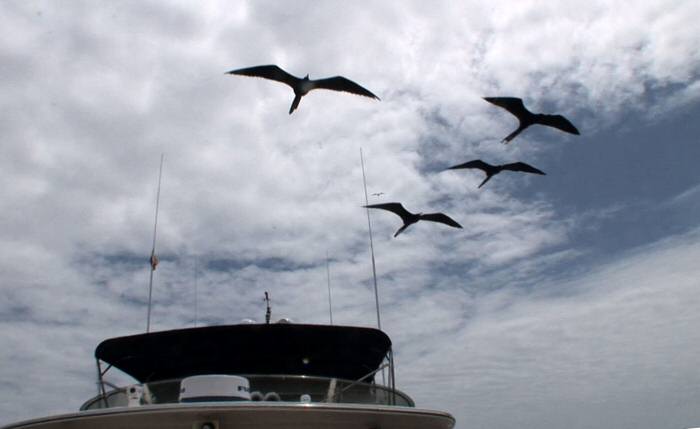 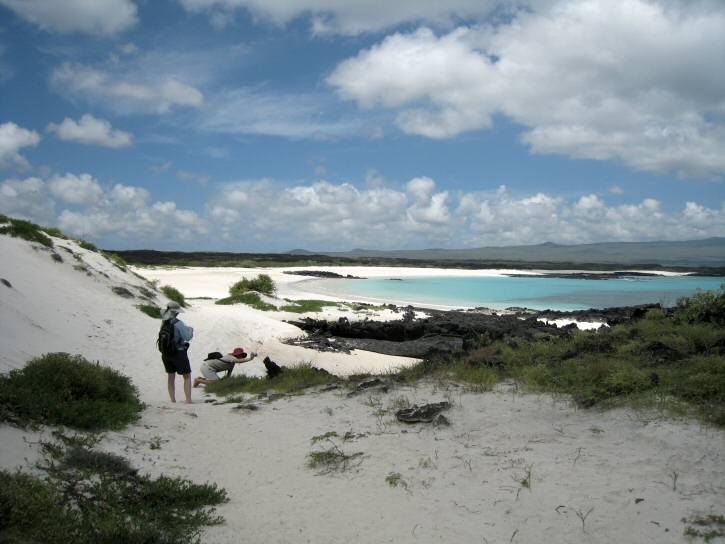 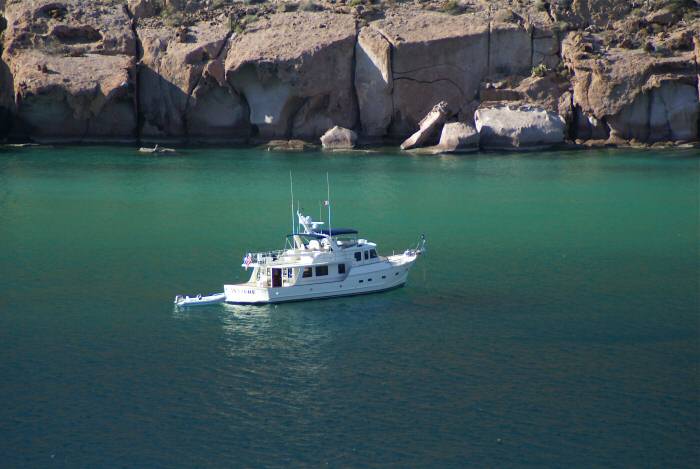 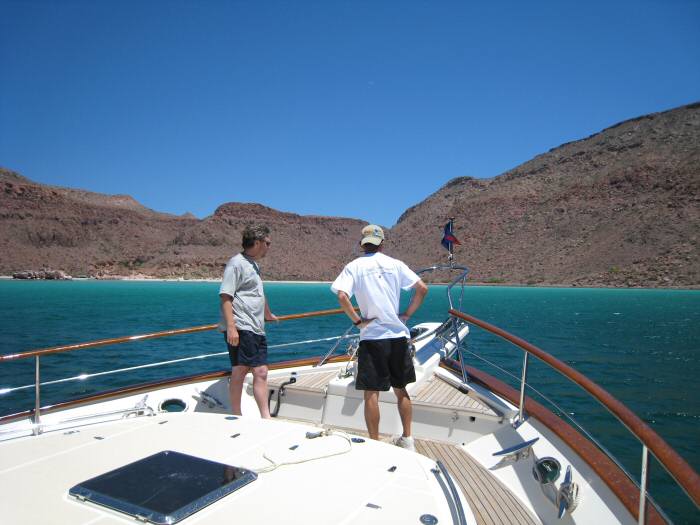 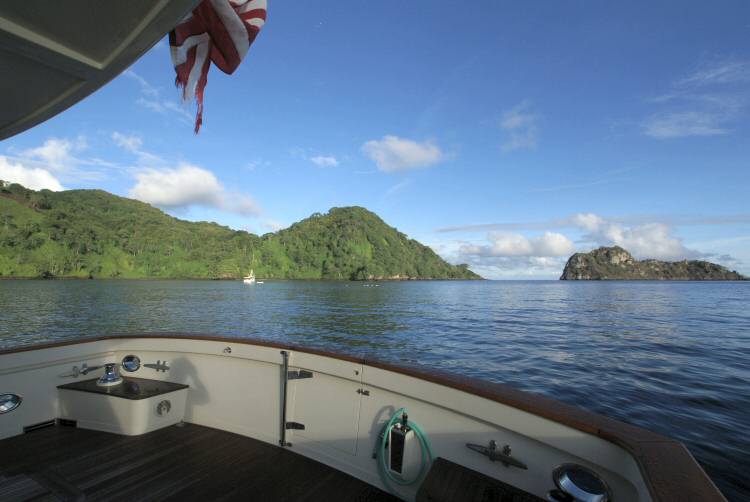 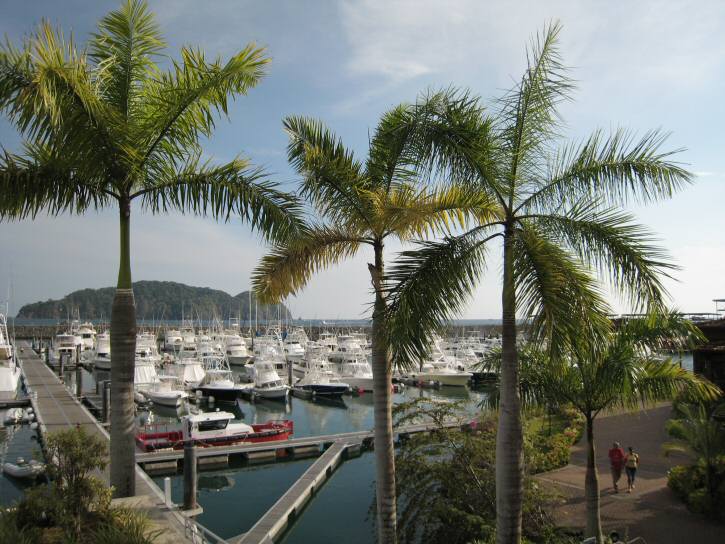 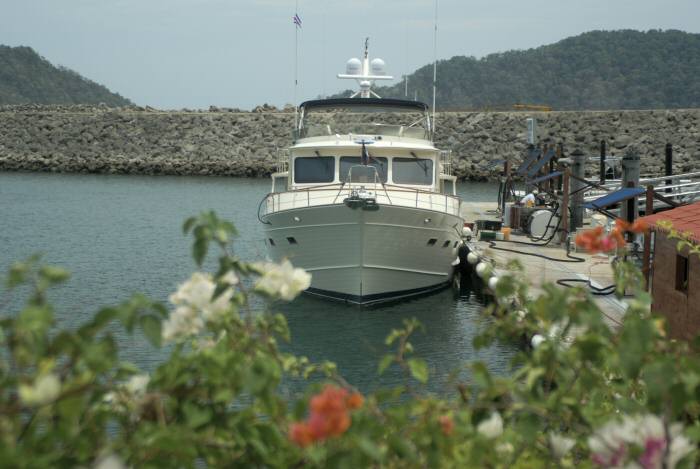 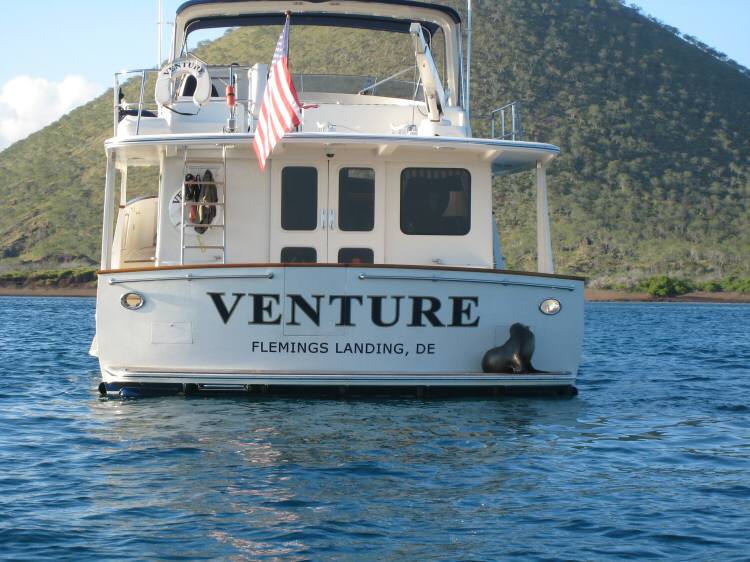 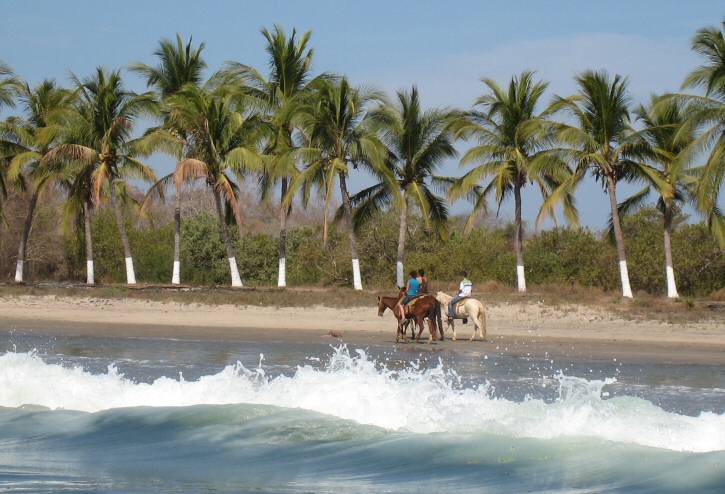 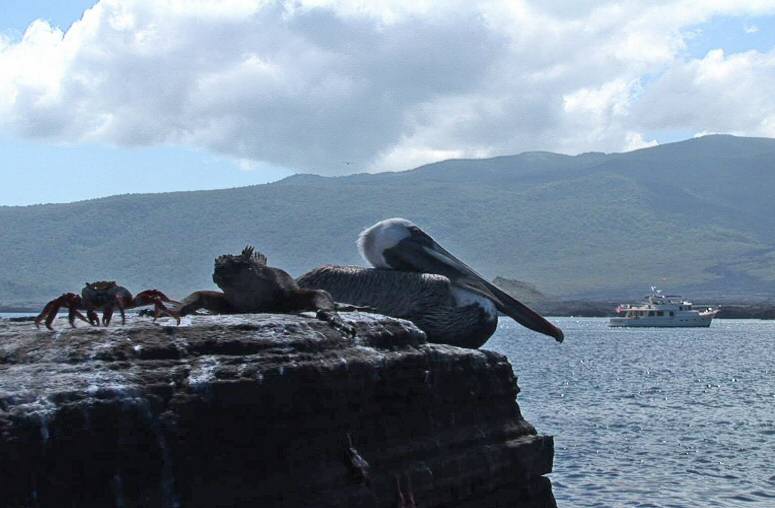 While in La Paz we shared the marina with two other Fleming 65's and two 55's while a third 55, which we had last encountered, by chance, in Wrangell Narrows in Alaska in the summer of 2006, showed up, also by chance, to share our anchorage at a nearby island in the Sea of Cortez. Such are the coincidences of long distance cruising.

We left the La Paz area on April 12th and our first stop was at Puerto Vallarta on the Mexican mainland. Here we had a rendezvous with another Fleming 65 for a photoshoot from a helicopter.

After enjoying the restaurants and amenities of the town we continued south to Tenacatita where we anchored in a small bay just off a small resort. The whole of this coast is exposed to the full force of the Pacific Ocean which makes landing a tender a real challenge on any beach. The normal hard-bottomed rib with control console and large engine is quite unsuitable for this purpose and a small, flat-bottomed tender with a small engine and fold-up wheels is a must. It can be deflated when not in use and carried in addition to the main tender.

The main feature at Tenacatita is a ride in the tender through the mangroves to a lagoon backing onto a beach which would be hard to access from the ocean. There is a bar at the entrance to the estuary which can only be crossed when the tide is high. Thereafter the river narrows down until you find yourself in a green tunnel ducking your head beneath overhanging branches which could decapitate you. To add to the fun, you are likely to meet local pangas speeding the other way around blind corners. Truly a memorable experience.

Our next stop was at Huatulco where we tied up at the modern marina with helpful staff. We visited the charming nearby town and its restaurants. Everyone we met was exceptionally friendly and nice and in fact this was true of all the places we stopped at along the coast. Huatulco is at the northern end of the infamous Gulf of Tuantapec. The landmass of Central America is very narrow at this point and north-easterly winds from the Gulf of Mexico are funneled across this narrow neck of land through a gap in the mountains and turn the gulf of Tuantapec into a maelstrom for as far as 200 miles out to sea. Some cruising boats stay as close as ¼ mile off the beach to escape its fury. We were lucky and a check of the weather showed that it was safe for us to make the crossing.

Unfortunately our schedule did not allow us to dally and we headed directly for Los Suenos in Costa Rica which meant traveling non-stop for 96 hours. Along the way, when we were 70 miles offshore, we met fierce Papagayo winds which churned up the sea. Los Suenos has a Marriott resort overlooking a modern marina which is packed with sports fishing boats all in immaculate condition as they are washed and their needs attended to on a daily basis by an army of industrious boat hands. We stayed here for a few days awaiting a change of crew and preparing ourselves and Venture for the long excursion out into the Pacific Ocean.

Our first stop was Isla del Coco - just a miniscule dot in the immensity of the ocean. Coco lies almost 300 miles offshore and is administered by Costa Rica. With the help of GPS and a modern charting program Coco loomed right ahead at just the time it should. The steep, forested flanks of this tropical island were shrouded in mist as we arrived in Chatham Bay giving it a lost world appearance. There were a couple of dive boats anchored in the bay. We were called on the radio by someone from a barely visible hut on shore and instructed to pick up one of the moorings with yellow floats.

The following morning a park ranger came on board and examined our paperwork. He also had a DVD for us to watch on the spot describing the rules of the national park. Only the rangers sleep ashore; all visitors have to stay aboard the boats which bring them to the island. The ranger was very friendly and we arranged later that morning to take a guide and walk through the forest to a waterfall. To start the trek we took the tender around to another bay and over a shallow bar into the mouth of a small river. I have to say that I found the trek extremely arduous as the rough track wound its way uphill through the heat and humidity of the tropical jungle. The last few yards involved forging through knee deep water and scrambling over slippery boulders.

The following morning we got underway once again for the Galapagos which lay another 440 miles out in the Pacific. We crossed the Equator at 3 AM on the morning of May 6th and we were all in the pilothouse to record the event. We arrived at Puerto Ayora at the southern end of the Island of Santa Cruz six hours later. The harbour is quite crowded and exposed to the ocean swells so all the boats were anchored fore and aft with two anchors. The agent came out to the boat in a water taxi to handle our paperwork. Later went ashore to the small town which had a quite a few shops, including a supermarket, and a number of restaurants. Here we met our agent, Johnny Romero and our naturalist guide Patricia Stucchi who went over out itinerary and lent us a bunch of marine charts of the islands.

We started our tour of the islands the following morning and over the next eight days cruised 327 miles among a number of islands. There is no space here to cover the trip in detail but we were lucky enough to see most of the indigenous flora and fauna unique to these special islands. An article about our visit will appear in the August issue of Yachting magazine. About 3% of the land in the Galapagos is inhabited or cultivated by humans and less than 1% of the remainder is open to tourists. A strict itinerary is arranged for visits and must be adhered to. For example, you cannot linger in a spot because you like it. If you are scheduled to visit it in the morning then you must be gone by the afternoon. No one is allowed to visit any place without a guide and there can be no more than 16 persons per guide. When you are ashore, the trails are clearly marked with black and white posts and signs saying STOP. You cannot deviate from the marked trail. Getting ashore can be a challenge: most landings are accurately described as "wet" meaning that you should be prepared to get wet up to your waist. Even for landings described as "dry" you can expect to get your feet wet. Tenders cannot be dragged up onto the beach or tethered in any way to the shore so usually someone has to stay behind on the tender and take their turn later - but still has to be accompanied by the guide. Anchoring the yacht can be a challenge as many of the anchorages are exposed and/or have rocks on the bottom. We bent two anchors in two days so you need to carry extra ground tackle.

We learned that, like so many other places, the Galapagos marine park is plagued by illegal fishing most especially the killing of sharks for their fins by local and foreign fishermen. The animals have their fins sliced off and are thrown back into the water to die. It is estimated that at least 300,000 sharks are destroyed annually in the Galapagos alone and 80% of the fins from that source go to San Francisco for distribution. So the next time you fancy a bowl of sharks fin soup just consider that you may be unwittingly contributing to the cruel slaughter of an increasingly endangered species - and just for a bowl of soup!

Other thoughts on the Galapagos are that the islands are much more widely dispersed than I had expected - tour boats always relocate at night - and most of the creatures for which the Galapagos are famous are smaller in reality than you might expect from having seem them on documentaries. My films will be no different because there is nothing in the frame to give an indication of size.

Having traveled all the way from Costa Rica to Coco and then to Galapagos where we cruised for eight days among the islands, Venture's fuel tanks were getting low and we took on 1550 gals of diesel at Baltra Island close to the main international airport. Fuel has to be arranged in advance by your local agent.

We had 900 miles of open ocean ahead of us before arriving at Panama City at the southern entrance of the famous canal. This was the longest passage any of us had undertaken in a powerboat and there are of course no ports of refuge between the destination and the point of departure. In the event we covered the distance in four days and six hours at an average speed of 8.7 knots burning 1.2 gallons per mile. For the most part the weather was fair although we did have one day in which we had swells and wind-blown waves on the beam which caused us to alter course to make the ride more comfortable. Honesty causes me to confess that the stabilizers failed on the outward journey so we had 2,000 miles without their benefits. I should say that the failure was not the fault of the stabilizers nor of the crew of Tung Hwa who built the boat but was due to changes made to Venture as she serves her role as a test bed for trying out new ideas - not all of which, I have to admit, have been successful. But then, unless we tried we wouldn't know. However, the inate stability of the Fleming hull kept the ride tolerable although cooking dinner would have been much more of a challenge without the potholders on the cooktop. When I see so many boats on the market without them I do wonder how they get along without them in rough weather. Sandwiches I guess.

Venture has now carried us 15,000 miles - 4,200 of them in the five weeks since we left the La Paz area on April 12th - and I am writing this latest update as we await our turn to enter the Panama Canal. By the time you read this, we will have transited the canal and will be on our way up the US Coast to New York where we will enter the Hudson and follow the Erie Canal and the St Lawrence Seaway en route to Nova Scotia.