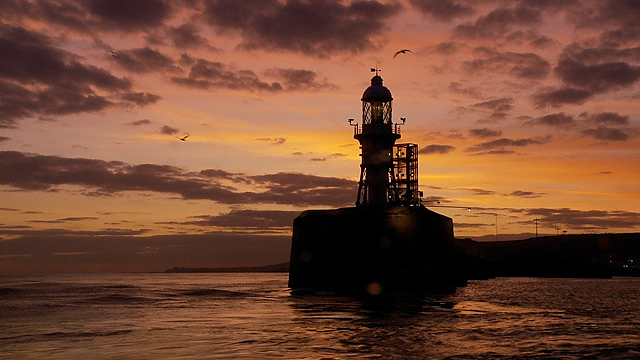 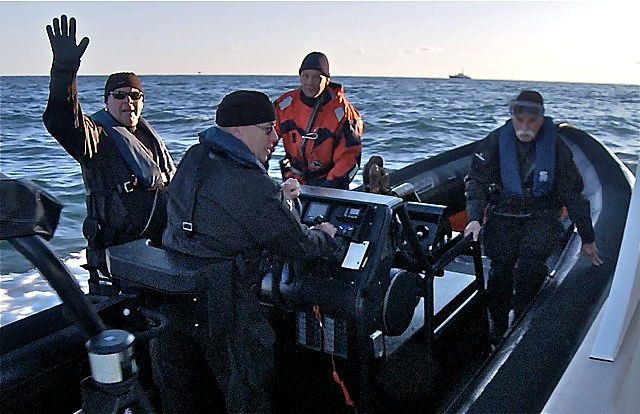 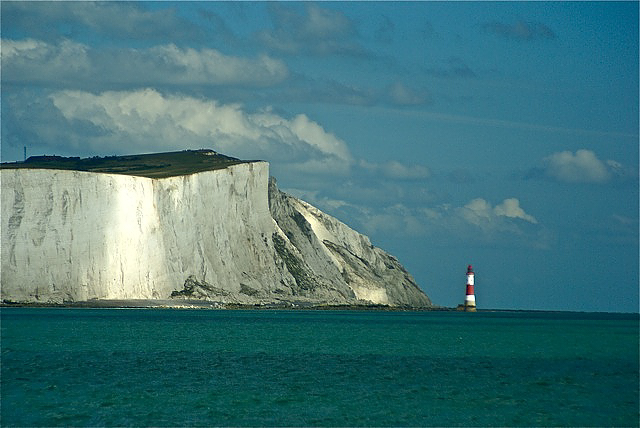 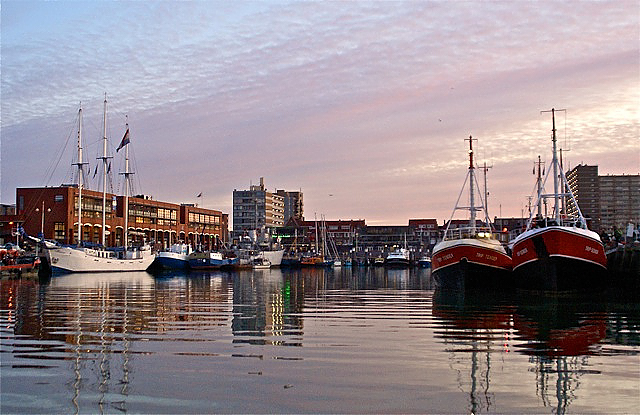 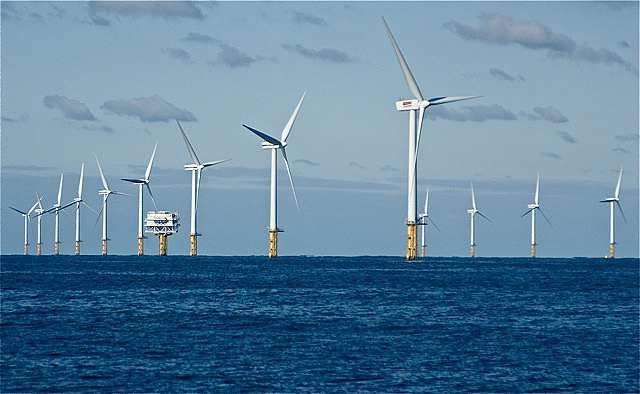 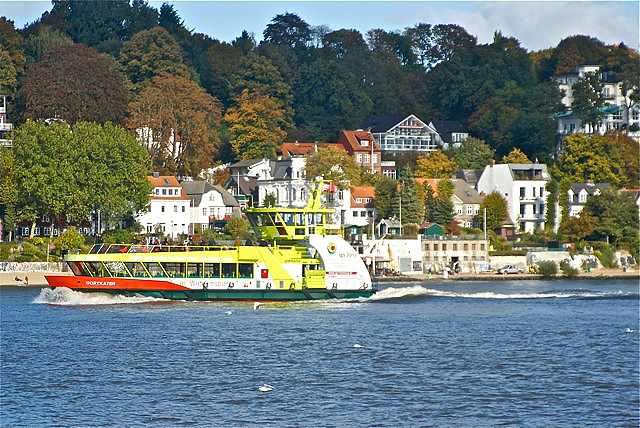 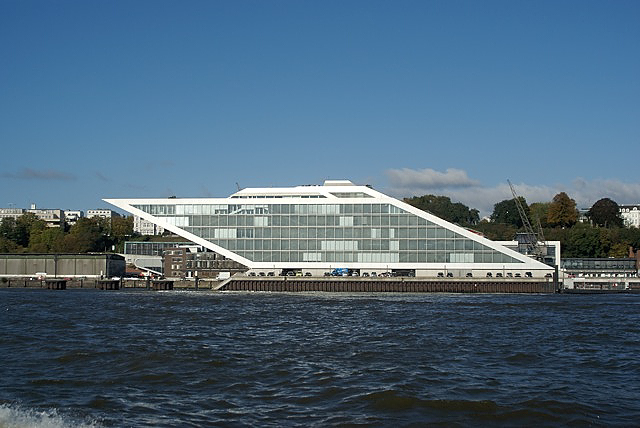 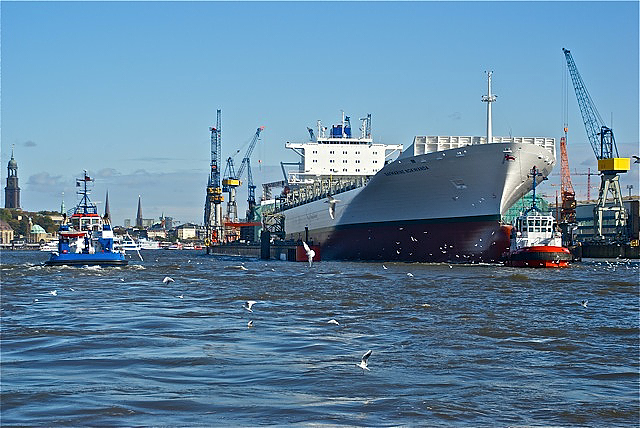 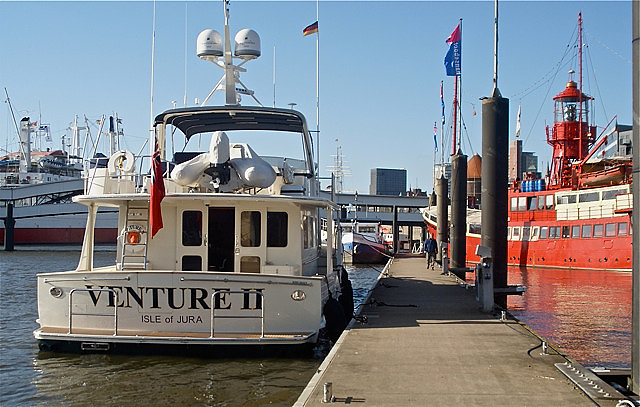 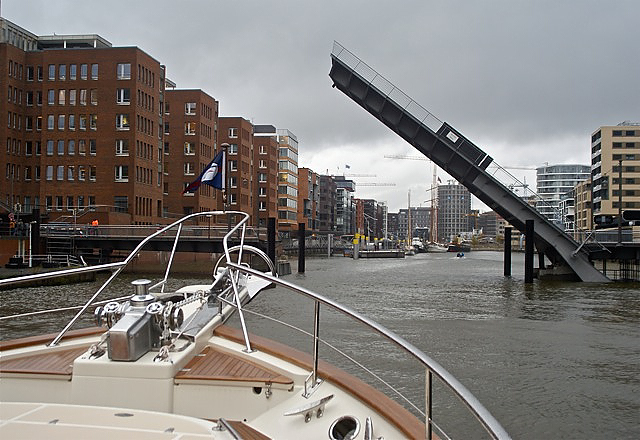 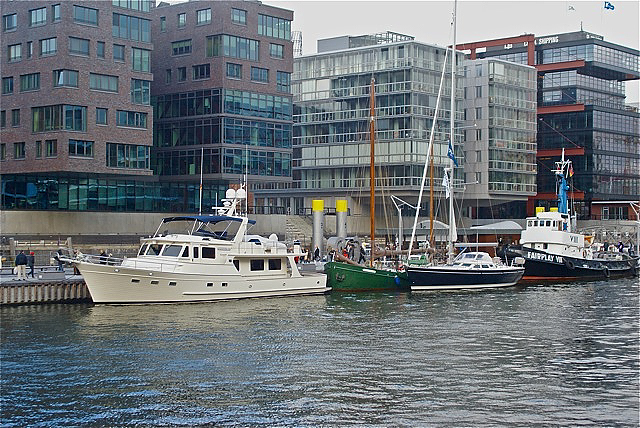 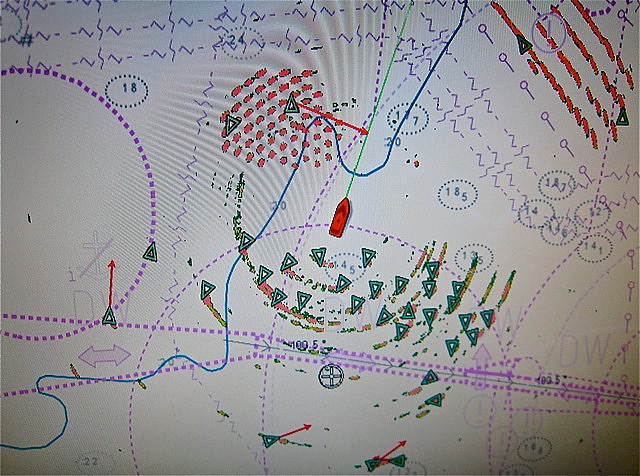 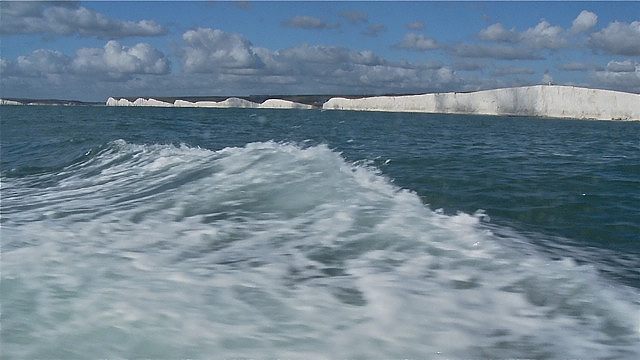 Two weeks after the boat show in Southampton, we set out in Venture II for Hamburg. We got underway early in the morning to catch the best of the tide up the English Channel to Dover. We were lucky with the weather, and it was fine and sunny as we passed by famous Beachy Head with its soaring cliffs of white chalk.

As we approached Dover we could see the coastline of France low on the horizon. We called harbor control just as the sun was setting and the triple lights at the entrance switched from red to green. We went first to the fuel dock where we topped off the tanks with red diesel. Britain is the only country in the European Union allowed to sell red diesel for marine use and it is important to retain the receipts. The red color denotes the rate at which the fuel is taxed. We went ashore on a chilly evening for an excellent meal. I had Dover sole which seemed to be especially appropriate considering we were in Dover.

The following morning we slipped the lines at 0630 just as dawn was breaking. The English Channel is a super highway for shipping with traffic moving east/west in strictly controlled traffic lanes monitored from both the British and the French sides of the Channel as well as being patrolled by aircraft. When transiting between the British Isles and Europe your heading - not your course over the ground - must be at right angles to the east/west shipping lanes. Separation zones divide the lanes and every vessel is tracked.

Once again the weather was clear and we had little trouble threading our way between the ships passing up and down the Channel at speeds as high as 26 knots. Once out of the Separation Zones we turned Northeast into the inshore zone allocated for vessels not exceeding 20 meters in length.

We had not gone far before we were intercepted by a business-like French Customs launch, who asked us to reduce speed to 5 knots while they asked us a lot of questions over the radio. The sea had started to get lumpy and we had stuff flying all over the place as the stabilizers cannot do their job at such a low idle speed. After about 10 minutes they gave us permission to proceed.

We were now in a new separation zone which followed the coast of Europe all the way north to Hamburg and beyond. The wind began to increase which kicked up the seas. Being less than 20 meters we made sure that we avoided the main shipping lanes and kept to the designated inshore areas. A brilliant sunset painted the sky and as night fell we were feeling our way through a bewildering mass of lights and flashing beacons. This was not too difficult with the aid of electronic charting systems and AIS but negotiating the arteries of Europe required intense concentration.

We received a radio call from the Dutch Coastguard telling us that we had infringed the traffic rules because we had exceeded the length allowed for using the small vessel inshore channel. Venture is actually 19.8 meters but we believed that our AIS was broadcasting our length 20 meters so we could not understand why they had accused us of being oversized.

We decided to stop for the night at the Dutch port of Scheveningen and did not get in until just before 9 pm. The harbor was very secure being in effect an inner harbour deep within an outer harbor but we could not find any space to tie up. Eventually we rafted alongside a steel fishing boat and hoped that he would not want to leave harbor at some ungodly hour in the morning.

It was a beautiful sunny morning, and the guy on the next boat was very helpful. He confirmed our weather information that the weather was forecast to deteriorate significantly on Friday so we were anxious to get going. We got underway at 0930 with the skies blue and seas calm.

After the call from the Dutch coastguard we decided we had better abandon the inshore route and join the big ships out in the Separation Zone. Some of these ships had a draft of 21.5 meters (70') and were traveling at speeds between 10 and 26.5 knots. We were running around 10 knots. Around 15 kms offshore, off the town of Ijmuden, we passed by a wind farm shown on the chart as being under construction. There were 60 huge modern windmills in this farm with an additional 36 off to starboard.

The wind began to increase and at 1720, when we were 10 miles offshore, a very smart Dutch Kustwacht (Coastguard) launch showed up and looked us over. They stopped a short distance away and lowered a black rib which sped towards us over the choppy seas. They came alongside and boarded through the side gate. They were very professional, shook hands with everyone, and removed their wet gear and boots before entering the salon. They said they had come about our violation of the rules concerning the inside waters the previous day. We explained that we were in fact just under 20 meters and showed them the registration certificate conforming the length at 19.8 meters. They said that the shoreside station that had reported us had told them that the length according to our AIS was 25 meters. After examining our documentation they conceded that we had not in fact violated the traffic rules but we had better get our AIS checked. Had we been guilty of the violation the fine would have been 700 Euros! They asked about the red diesel we had and I was asked to show the receipts to prove we had purchased it in Dover. After twenty minutes on board they departed with handshakes all round and best wishes for success at the Hamburg and Dusseldorf shows.

Subsequent checking confirmed that our AIS was indeed broadcasting our length at 25 meters. During set up, the location of the antenna from the bow and from the stern has to be entered into the AIS unit and it is important that the sum of these two dimensions does not exceed the actual length of the vessel especially if, as in our case, that length was close to the critical point of 20 meters at which many of the rules and requirements change.

Shortly after their departure the color drained from the sky and we were in for a rough night. The wind increased right on the nose with gusts of 32 knots so we had nasty head seas which, in the relatively shallow North Sea, are short and steep and we were still out in the main Separation Zone with the big ships. However, we had not finished with the authorities and were buzzed by a helicopter just before midnight which circled us twice and shone its powerful lights on us. We have no idea who they represented as they did not contact us. There were stars overhead and a crescent moon hung above the horizon. If not for the wind it would have been a perfect night but it seemed very long and, when dawn crept above the horizon ahead of us, it was a very welcome sight.

Around 0830 we entered the estuary of the River Elbe and headed for the marina at Cuxhaven where we had planned to stop for the rest of the day but no one answered our call and, as Venture looked a bit too big for the spaces available, we decided to continue the remaining 50 miles upstream to Hamburg.

The river was quite wide with great numbers of modern windmills all along both banks which were flat and featureless. A few miles upstream on the port side we saw the entrance to the Kiel Canal leading through to the Baltic and through which I passed in a Fleming 55 in the summer of 1992 en route to Norway.

We were fortunate to have a strong flood tide pushing us upstream at almost 12 knots and, as the river narrowed, we gained progressively more shelter from the full force of the wind. The sun was shining and the approaches to the city were impressive with beautiful houses lining the northern shore surrounded by fall colors. An escort of black-headed gulls, already in their winter plumage, wheeled behind the boat darting down to the surface to snatch tasty morsels churned up by our wake from the brown water.

The south shore was largely commercial with tugs moving a freighter out of a dry dock while to port and ahead of us, as the river curved to starboard, the spires of churches and modern structures reached towards the sky.

After thirty hours underway at an average speed of 10 kts, we arrived in Hamburg at 1430 tired but relieved to have reached our destination. We tied up in the marina at Sandorhoft in the very center of the city. We look forward to being here more than two weeks not only for the boat show, where Venture II will be the largest power boat in the in-water section, but also for the opportunity to explore this interesting and vibrant city.