Vancouver Island to the Aleutians and Beyond - Part Five 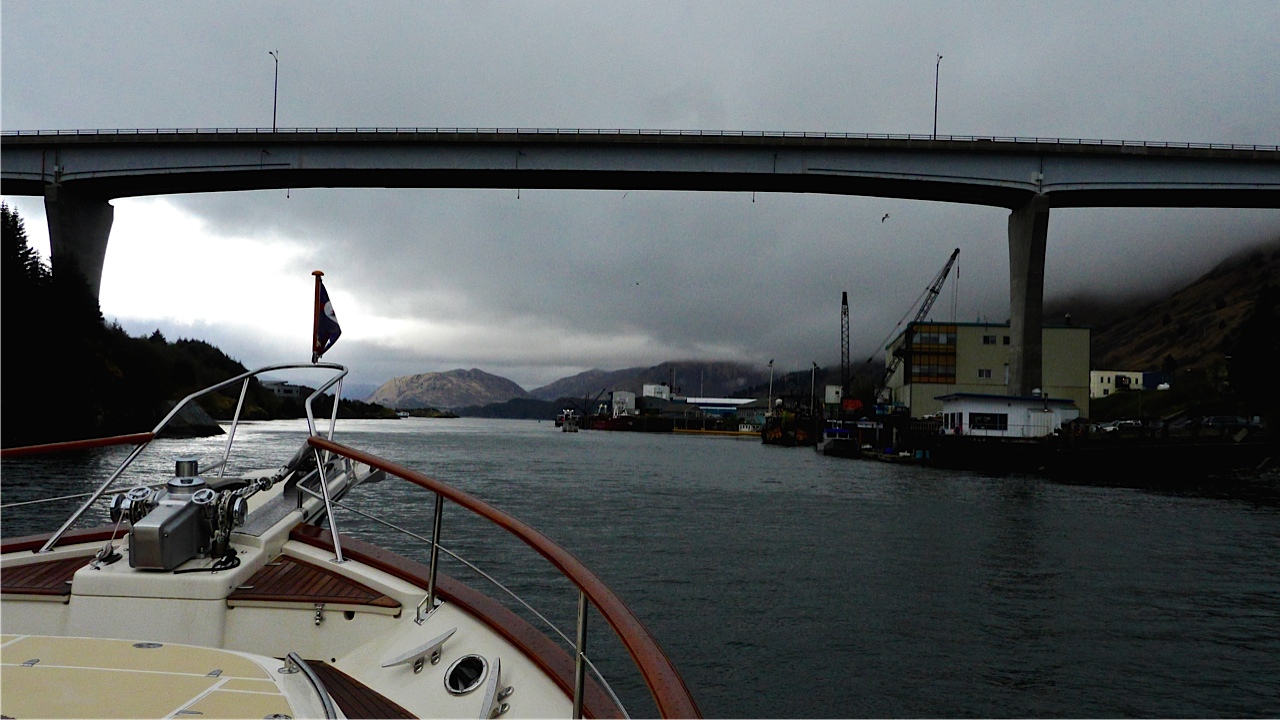 Bridge at entrance to Kodiak harbor 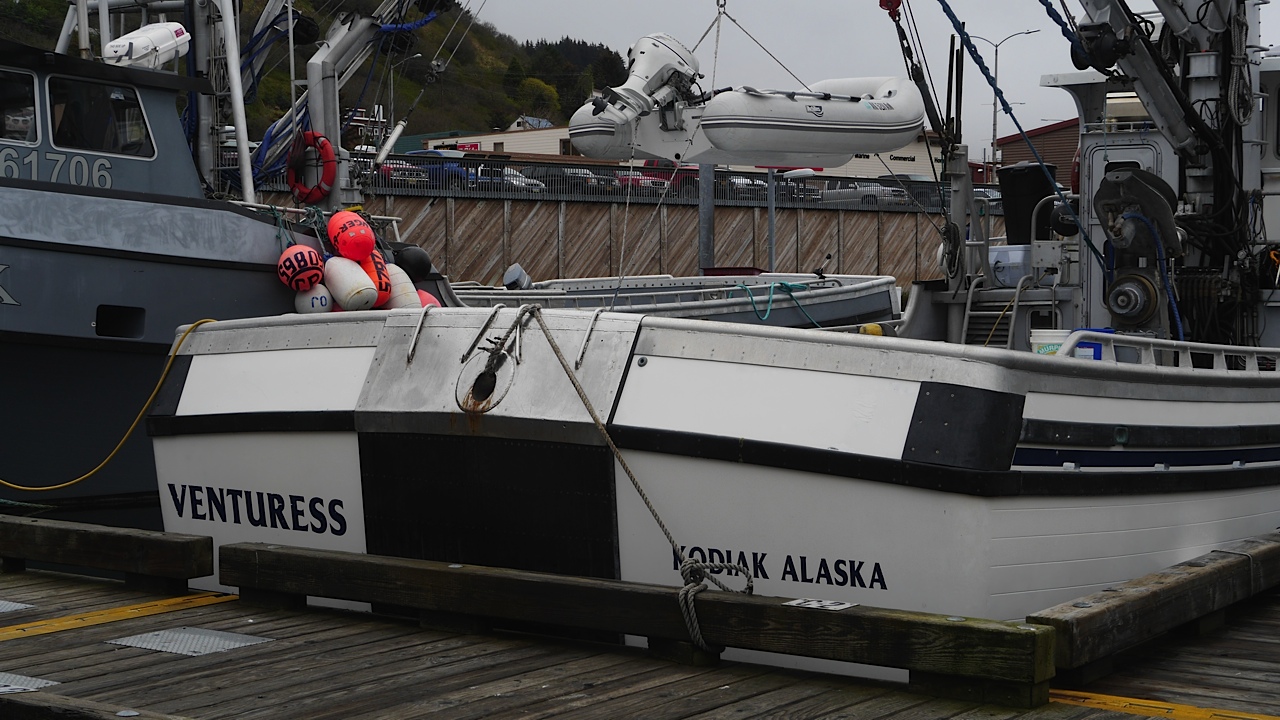 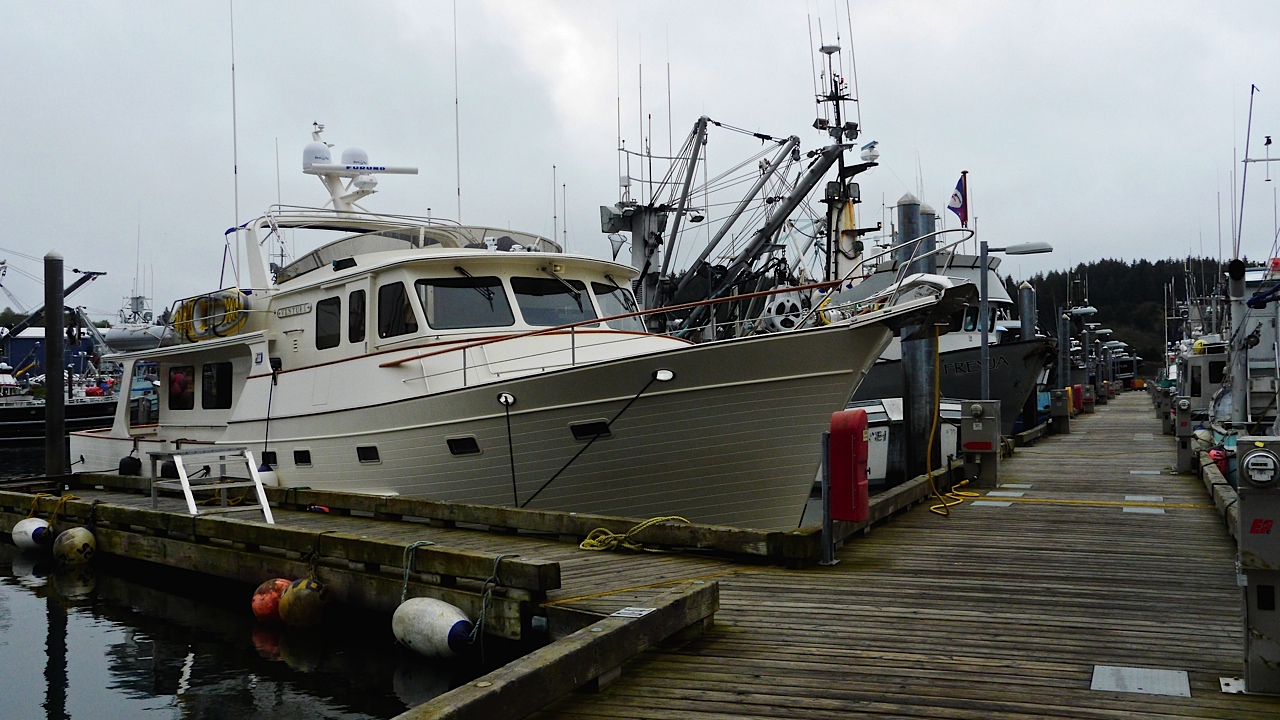 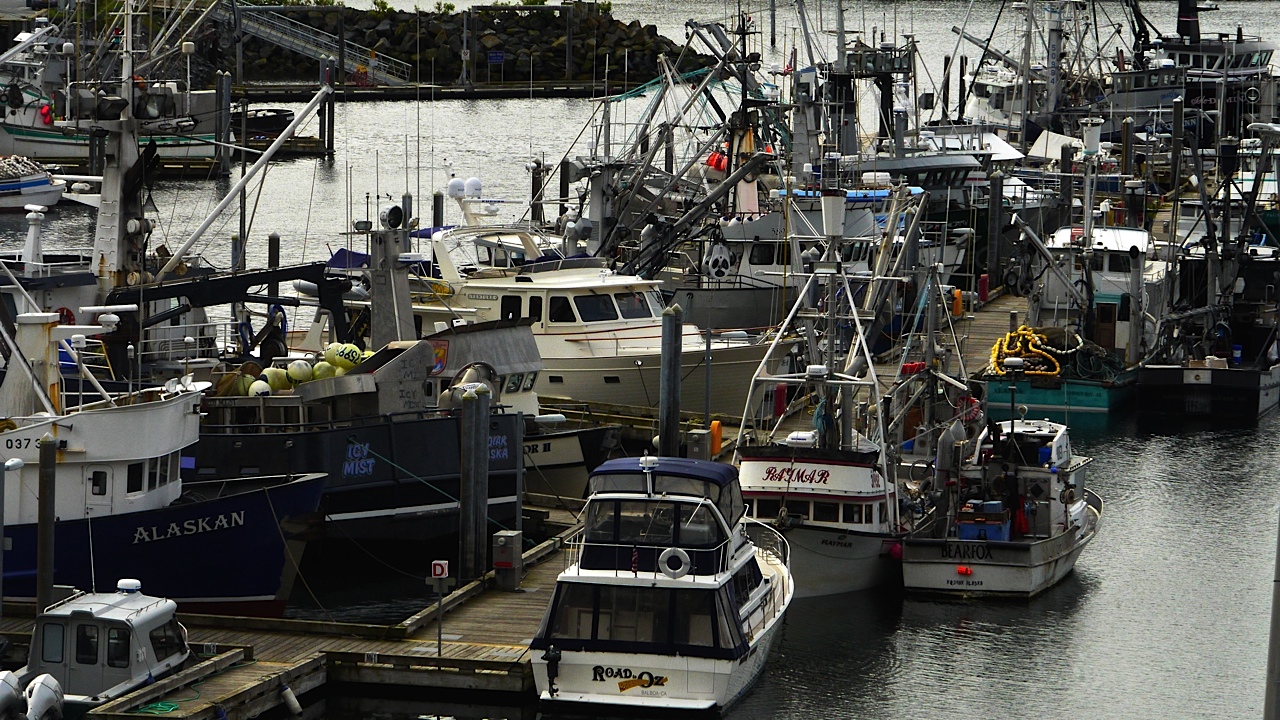 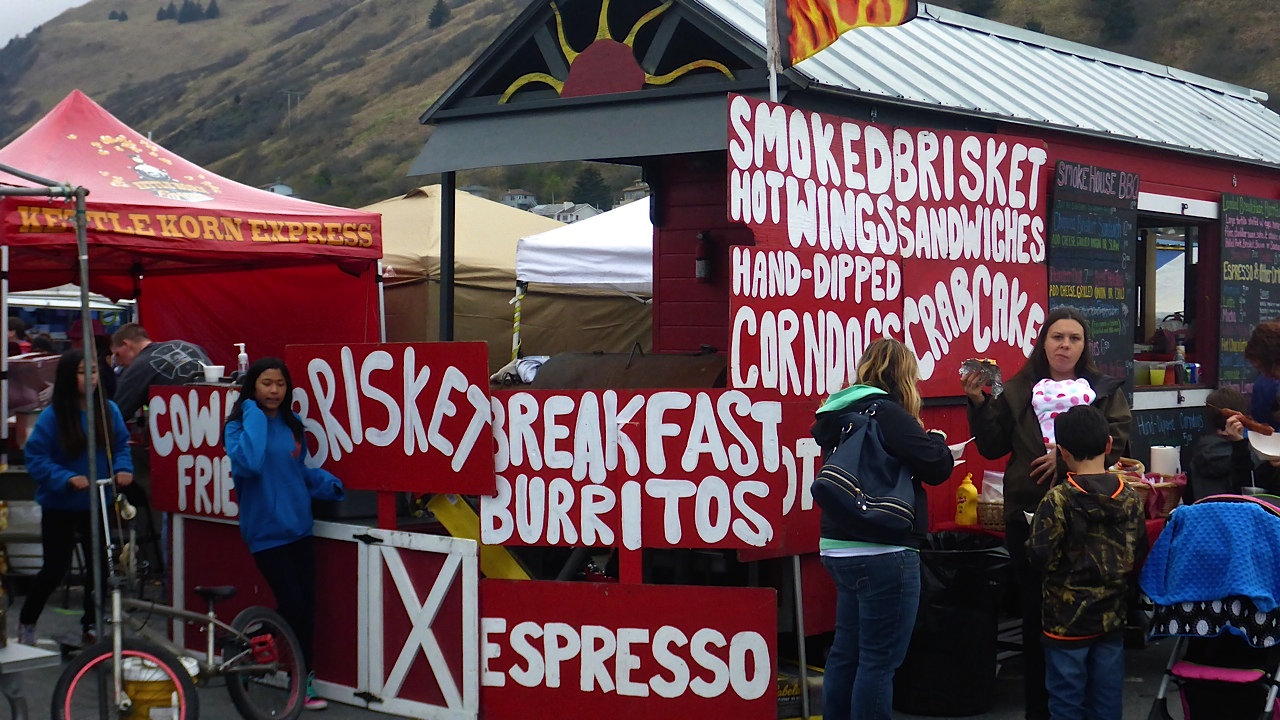 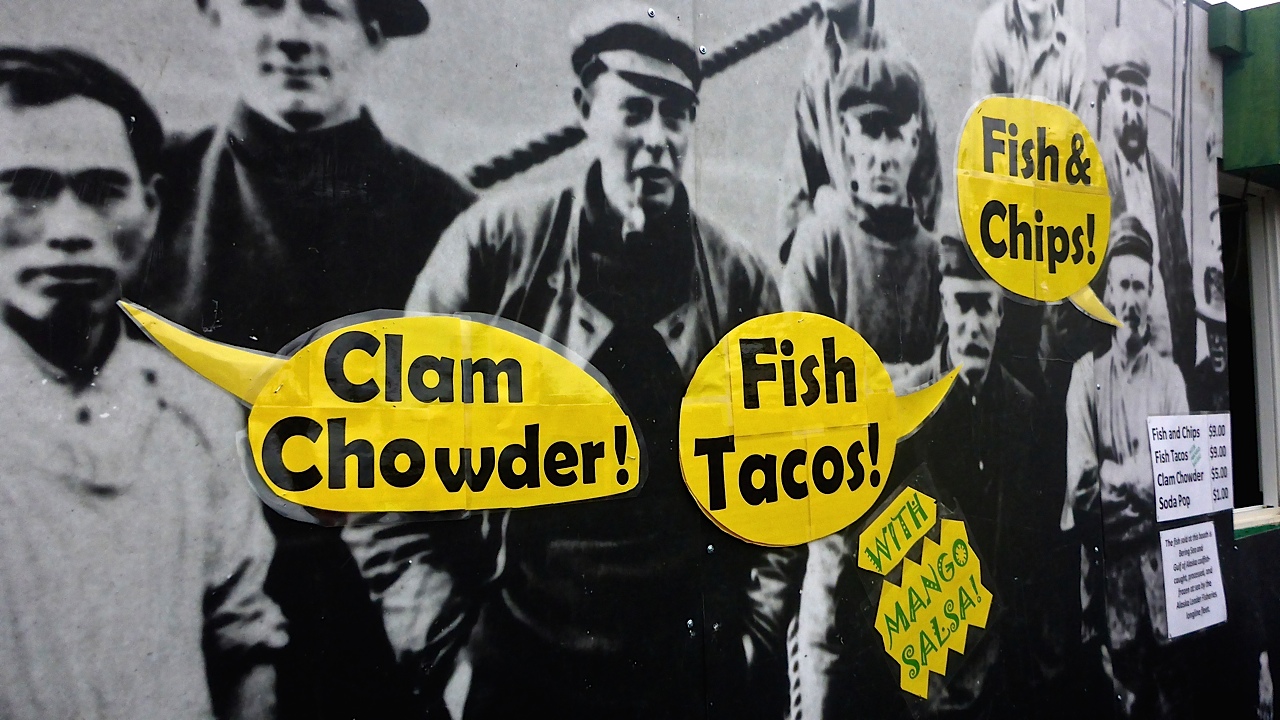 Another stall at Crab Fest 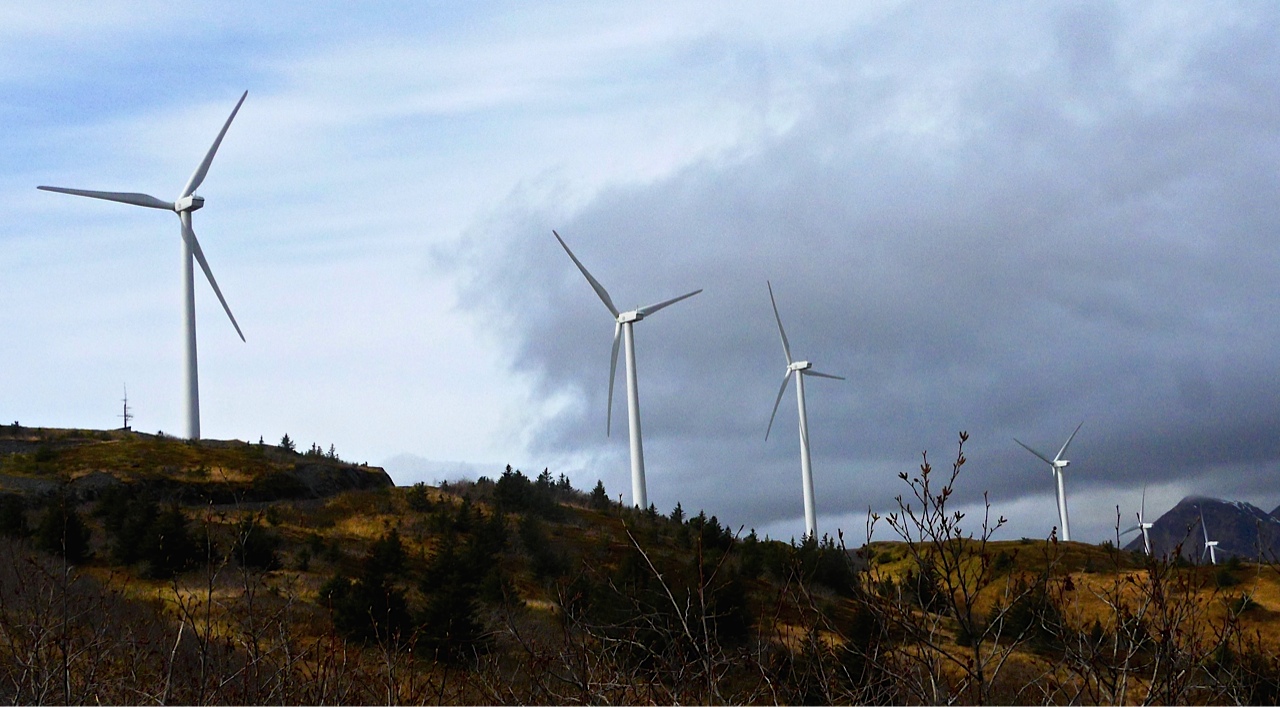 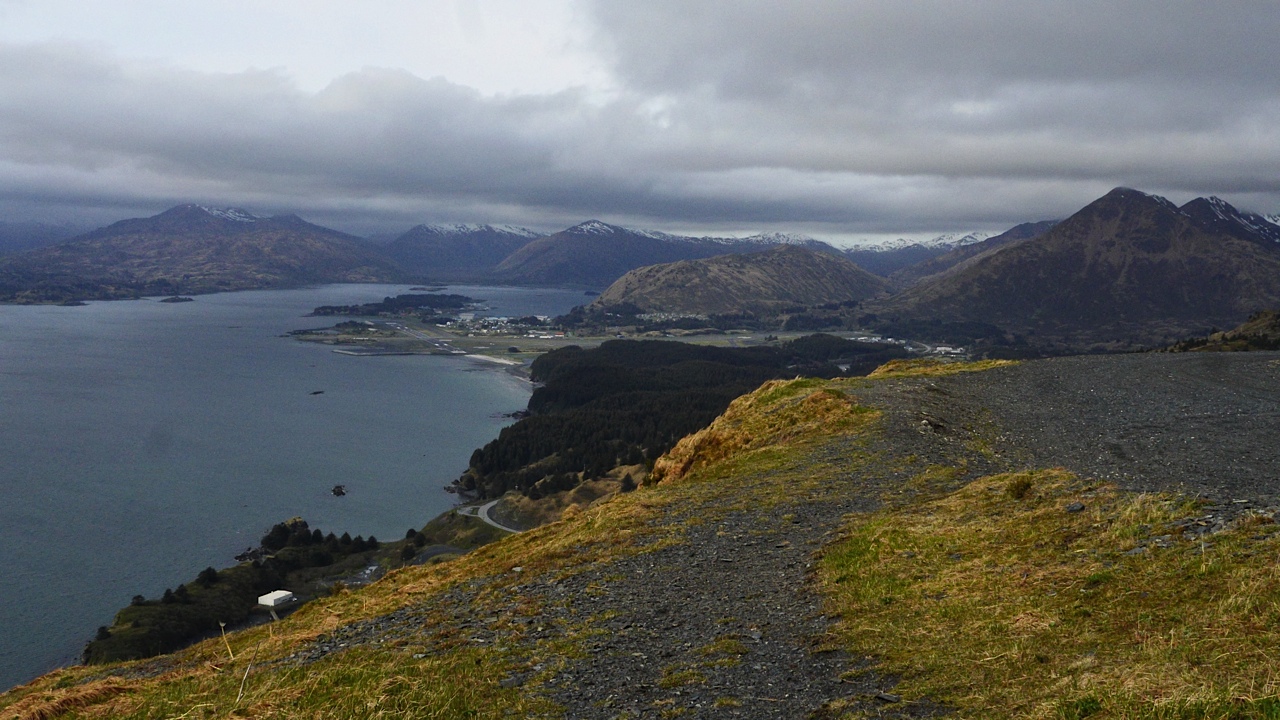 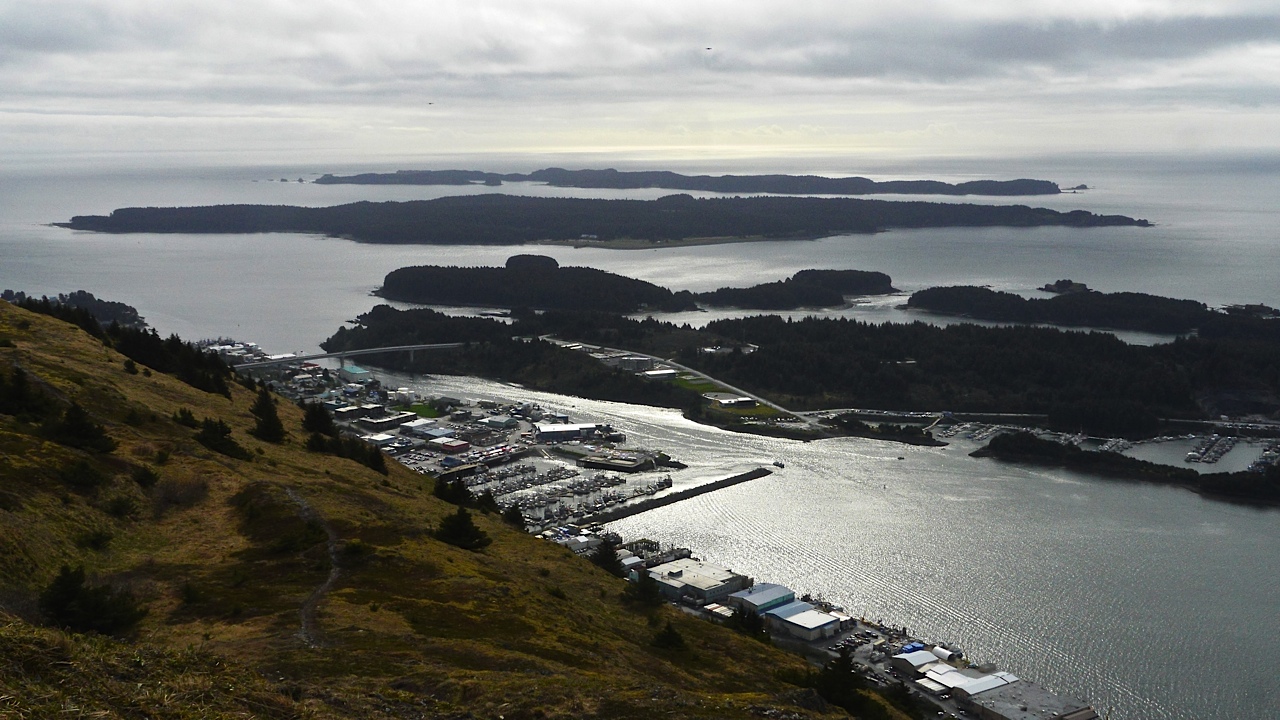 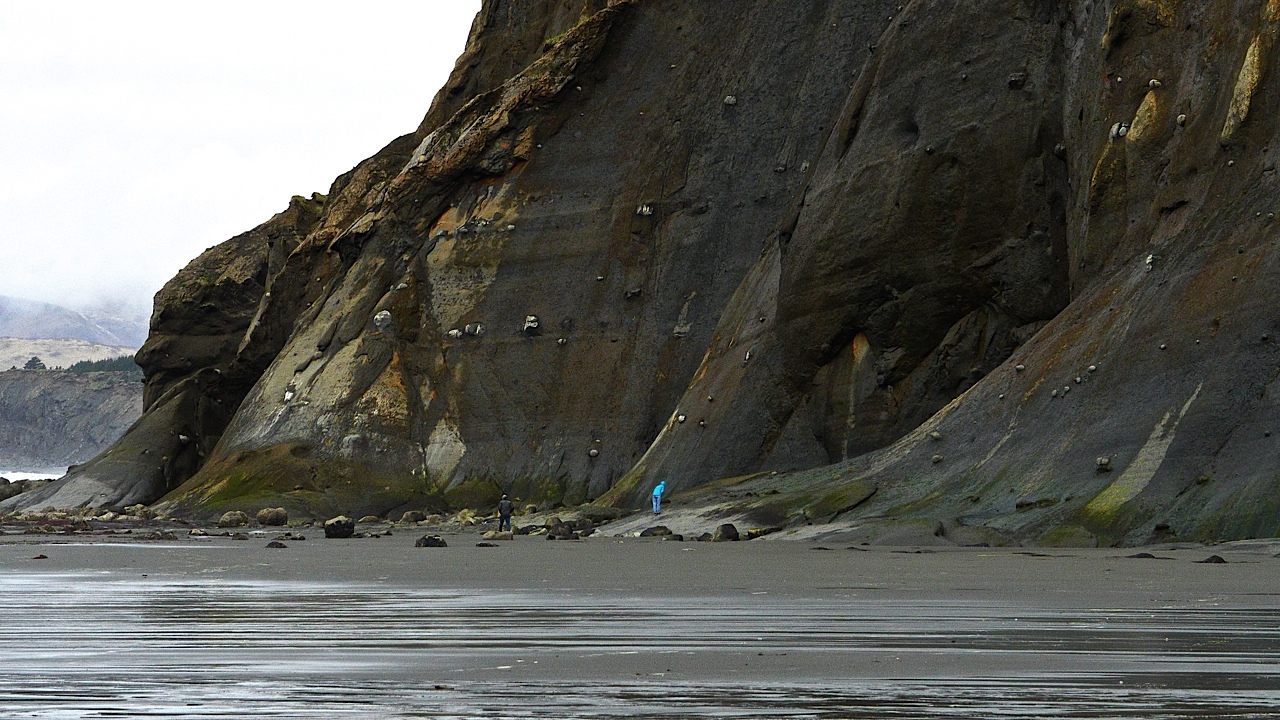 Chris and Christine at Fossil Beach 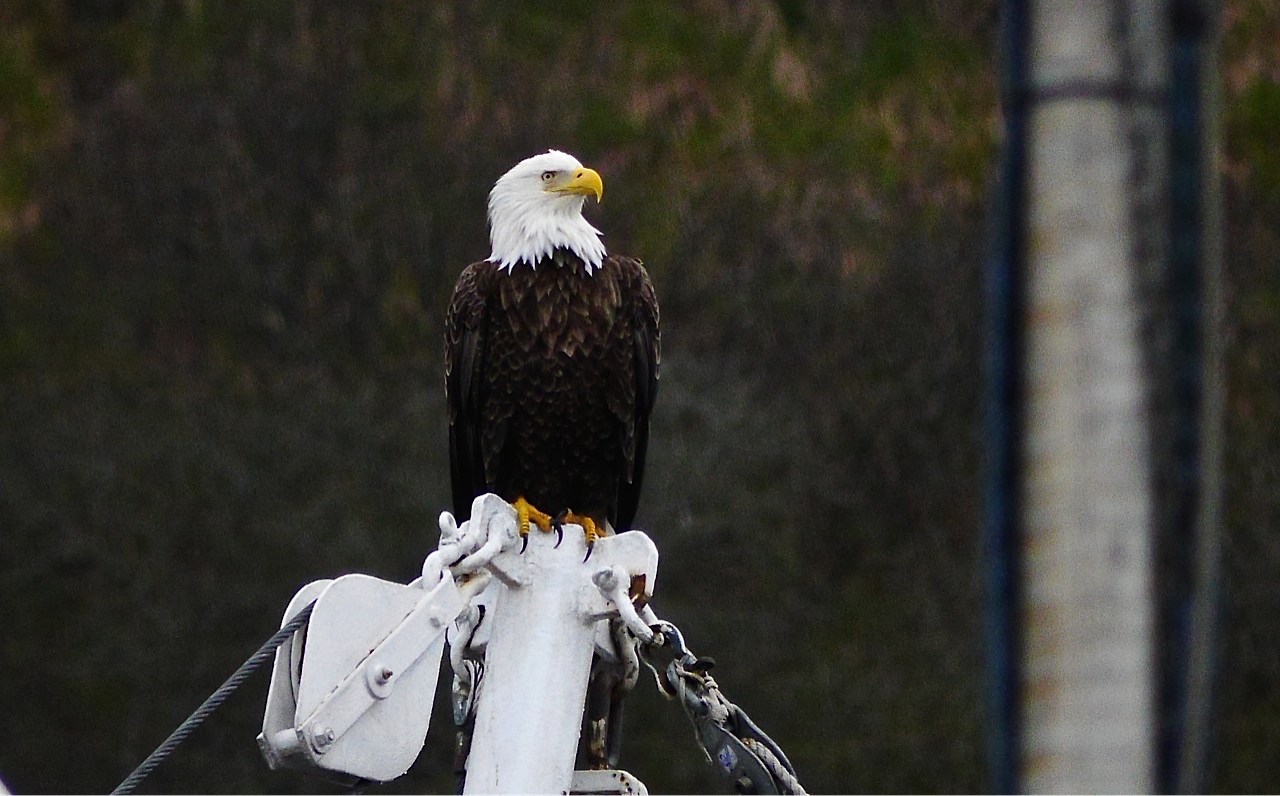 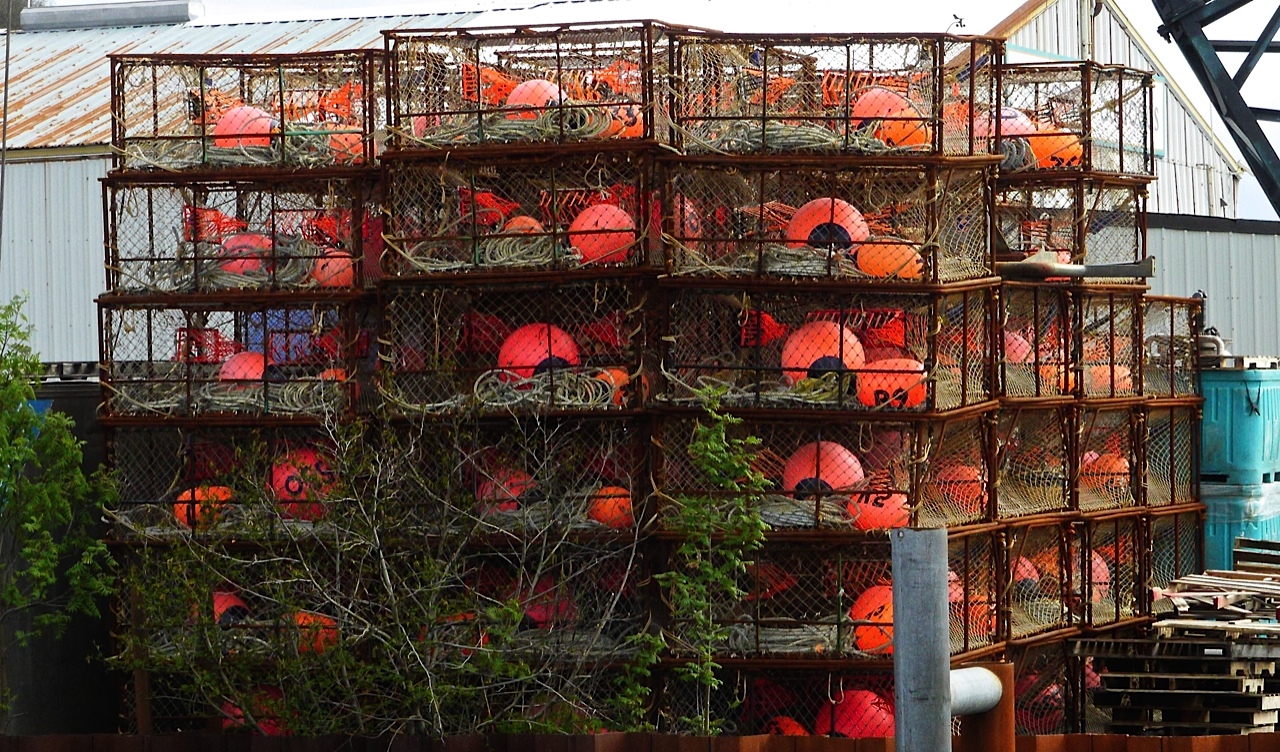 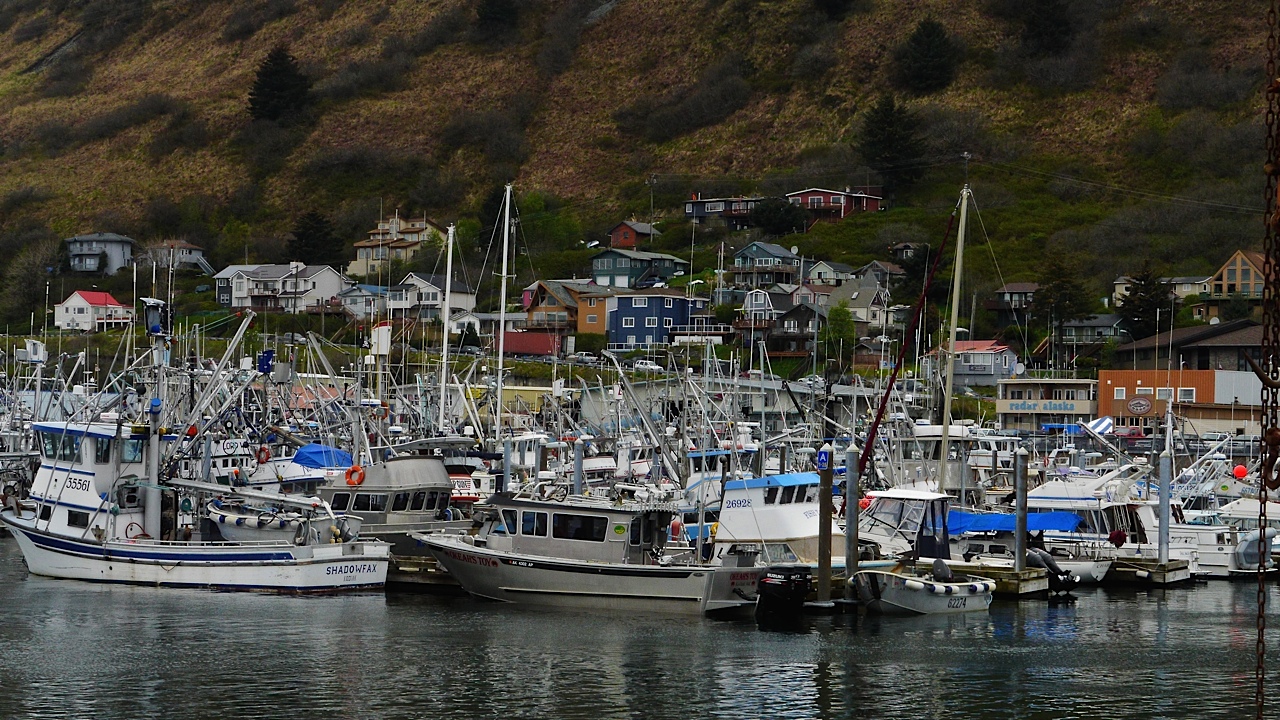 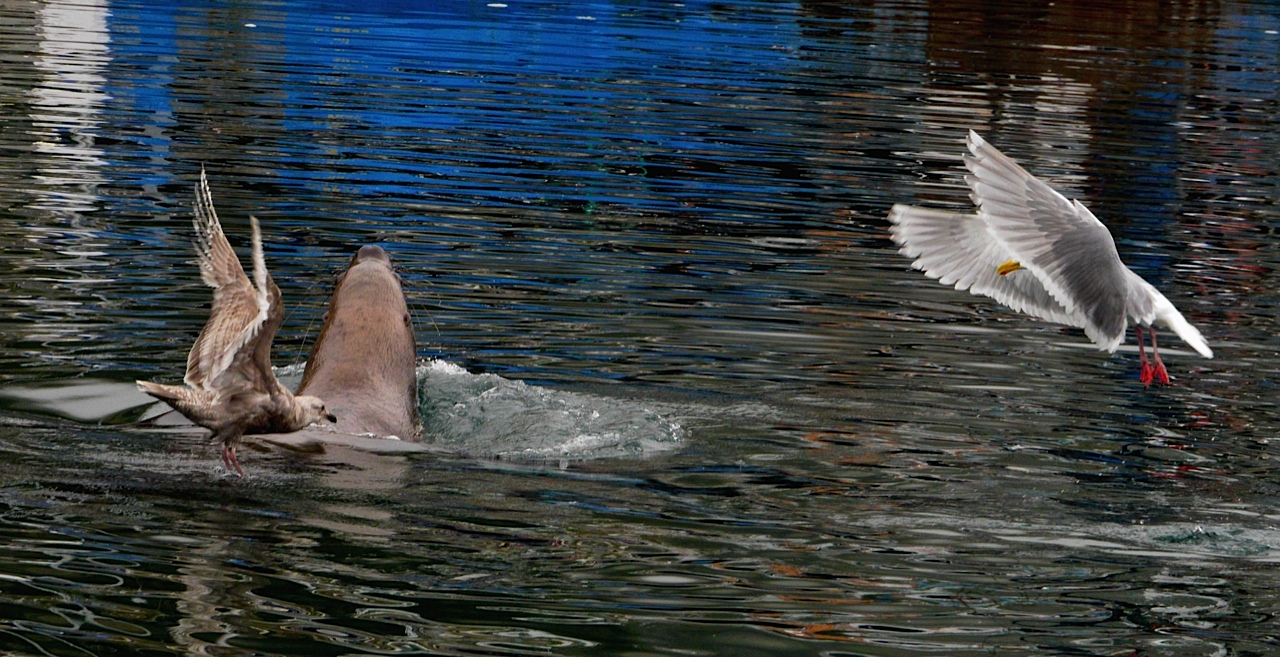 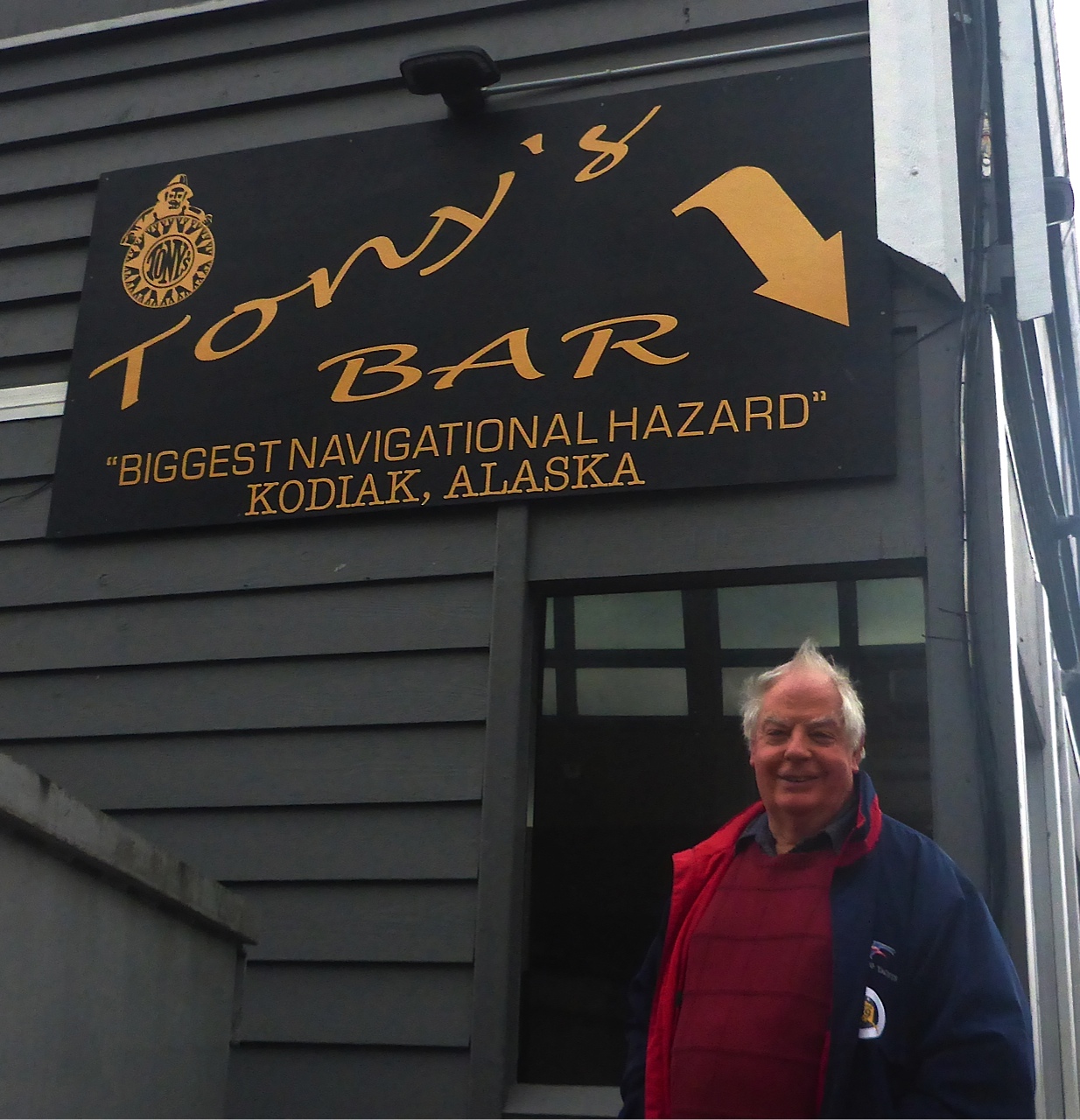 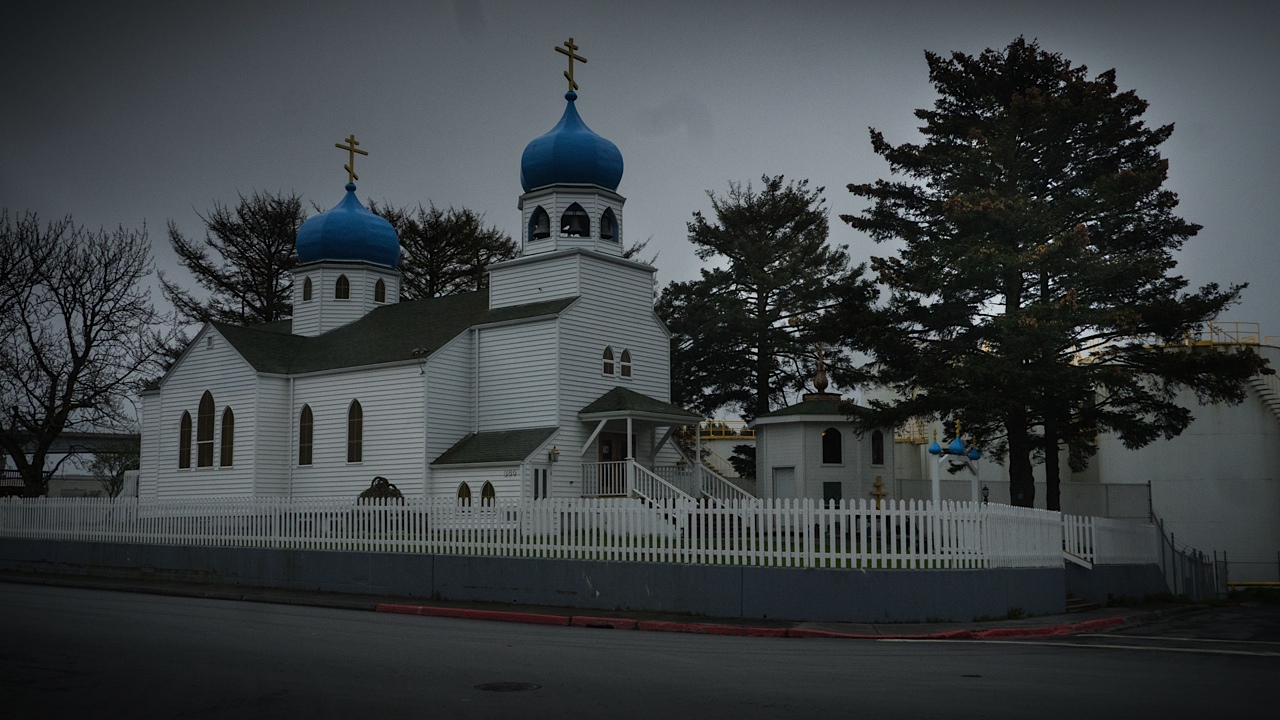 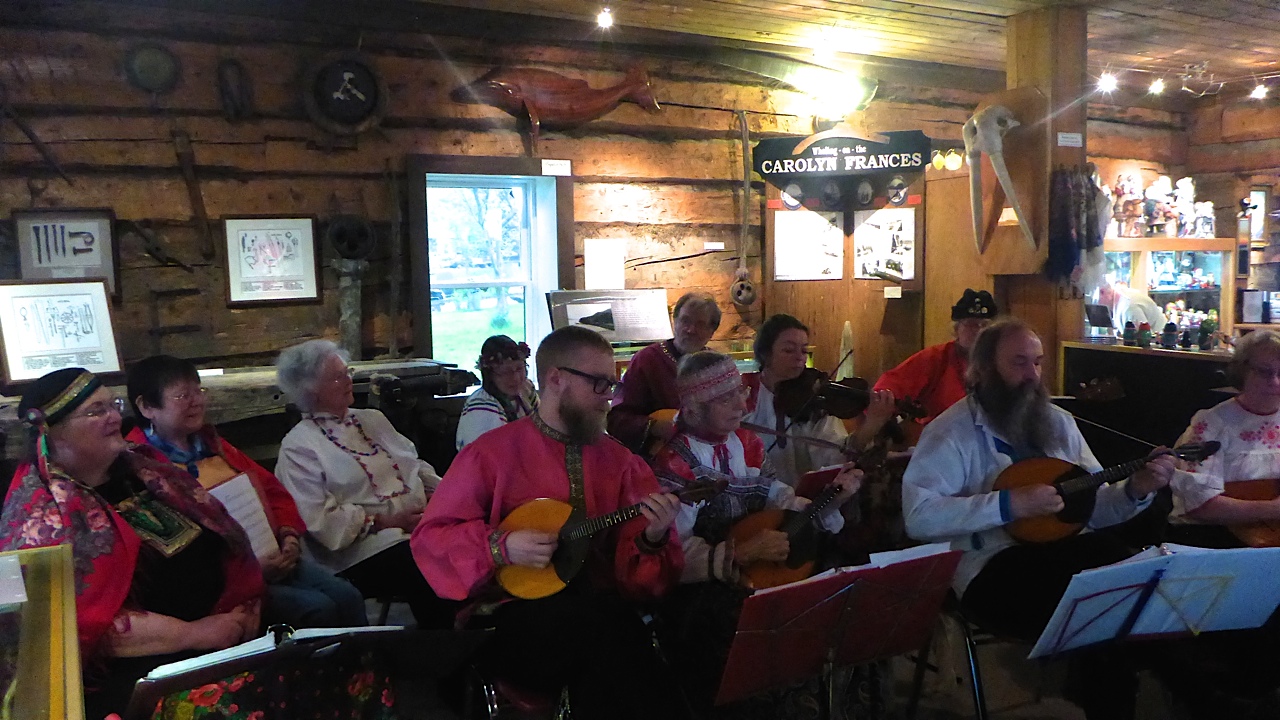 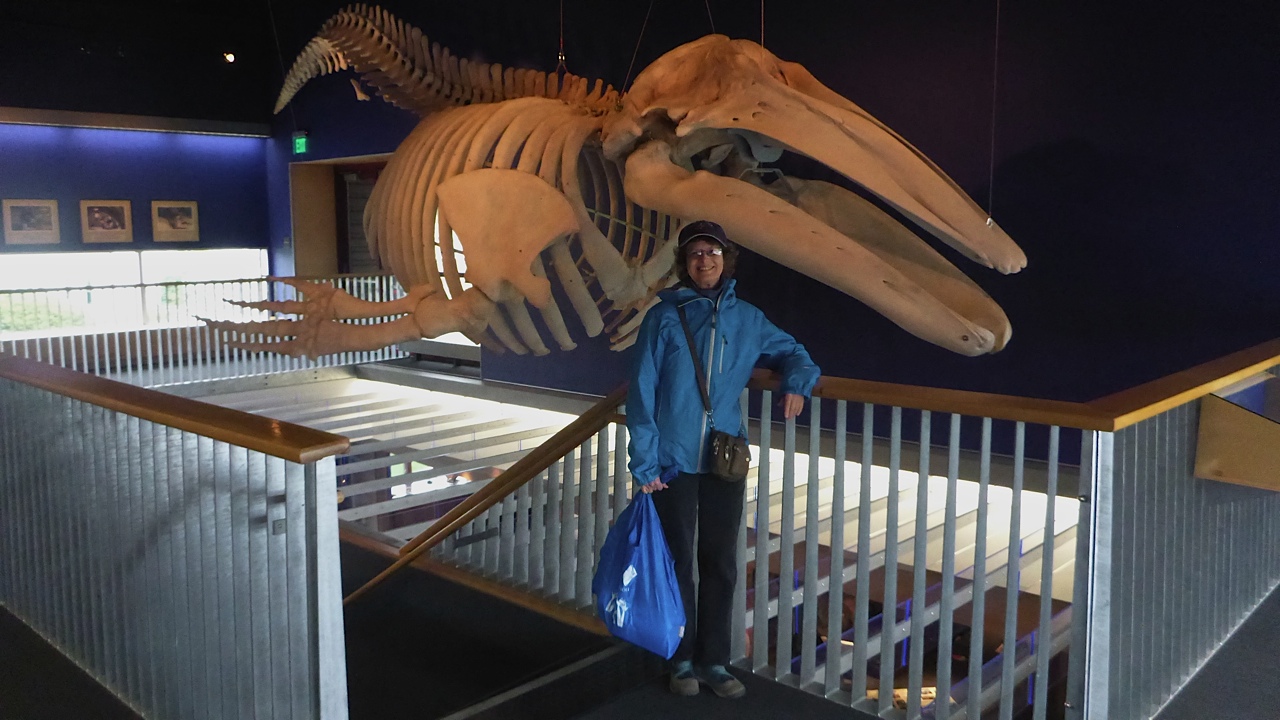 Bridge at entrance to Kodiak harbor A relative perhaps? Venture in St. Paul's Harbor Venture among working boats Stall at Crab Fest Another stall at Crab Fest Windmills on Pillar Mountain View from Pillar Mountain Kodiak Harbor from Pillar Mountain Chris and Christine at Fossil Beach Bald Eagle Crab pots awaiting the season St. Paul Harbor Seal with gulls Namesake! Russian Orthodox Church Balalaika concert at Baranof Museum Christine with Grey Whale skeleton We arrived in Kodiak on the afternoon of Tuesday May 19th. Fishing is the economic mainstay of the town and the two marinas, St. Paul's and Herman, are crammed with commercial fishing boats. Venture definitely stands out as the exception but still received many compliments. I like to think this is because she looks like a serious seagoing vessel - which she has proved to be - we have just passed the 50,000 nm mark.

The names of many of the streets reflect the fact that Kodiak was once a Russian town and, regarding its history, I can do no better than quote from the official guide. "Until the middle of the 18th century, the Alutiig people enjoyed an undisturbed life in the Kodiak archipelago. Everything they needed was here, waters rich in fish, seals, whales and sea lions, land bursting with berries, birds and mammals. For thousands of years they lived in harmony with all the sea and earth provided. Their peaceful life came to an end in 1784 when Russian settlers initiated an economy based on compulsory labor. Kodiak quickly became the commercial center for Russian fur trade and Alutiiq natives were compelled to hunt sea otters for the benefit of the company.

The village of Kodiak changed permanently when Alexander Baranof built an otter pelt warehouse overlooking the harbor. More than 200 years later the building still stands and is now home to the Baranof museum. It is the oldest structure in Alaska and the oldest of all Russian buildings in North America. The most lasting legacy of the Russian era is the Russian orthodox religion. With its distinctive blue cupolas, the Holy Resurrection Russian Orthodox Cathedral is a prominent fixture in downtown Kodiak."

It is indeed fortunate that these two structures were built on land high enough to escape destruction by the 30' tsunami resulting from the 1964 Alaska earthquake. The wave caused widespread damage and wiped out the harbor and much of downtown Kodiak. Earlier, in 1912, the largest volcanic eruption in the 20th century had dumped more than 2ft of ash on the town when Mt. Novarupta on the Alaskan mainland shot six cubic miles of earth into the air.

The USA purchased Alaska from Russia in 1867 for just $7.2 million - around 2.5 cents/acre in what has to have been the deal of the century - although, at the time, President Andrew Johnson was roundly criticized for wasting money. The deal was named Sewards's Folly - after Seward, who was then Secretary of the Interior and had been the one who negotiated the deal with the Russians.

During our stay we have met up with a few other cruising boats. One is Teacup which we saw in Tonsina Bay on the Kenai Peninsula. The owner, retired from Nasa and famous in the world of computer science, brings his boat here from Puget Sound every year where he specializes in photographing the famous Kodiak bears. We invite him aboard Venture to show us his photos and tell us about his favorite places around Kodiak Island. Walking the docks I come across a sailboat with the hailing port of Hobart. I asked the couple on board whether they had really come from that distant port and indeed they have! They overwintered their boat in Kodiak but the previous summer had come up the Aleutian chain and, this year, are planning to spend time in Prince William Sound.

Aboard Venture, over cheese and wine, we exchange information on these two cruising areas. We rent a car and drive first to top of Pillar Mountain which overlooks Kodiak and from which there are extensive views. The huge blades of six modern windmills swish through the air above our heads churning out power for the town nestled at our feet. From there we drive out to Fossil Beach on Narrow Cape and pass by the Kodiak Rocket Launch complex. Walking the dock on our return we meet Marty who retired as harbor master on year ago and who had just returned from taking a 37 sailboat to Dutch Harbor. We also meet Toby with the maritime museum who, in a couple of weeks will be moving out of town to spend the summer tending his set-nets for the summer season. He invites us to visit him there and I am sure there will be more about this in a future blog. The life of a set netter is fascinating and of great interest.

As mentioned in my previous blog, our visit has coincided with Crabfest which takes place over Memorial day weekend and just before the start of the fishing season. A number of stalls are set up by the Harbormaster's office along the waterfront. Christine and I buy fish tacos for dinner one evening. I am struck by the number of small children enjoying the fun which includes bobbing around on small pool sealed inside inflatable spheres in which they tumble as if in a horizontal drier. There is also an awful looking device for hurling people into the air on bungees to accompaniment of load screams. Among the wide variety of events is a balalaika concert at the Baranof museum. One of the performers is Dan who I had met on the dock a couple of days ago. He was originally from Newport RI but had been in Kodiak for 40 years. He tells me you could get every kind of boat-related work done here including electronic engines. He tells me that the Shell oil rig that went aground in Alaska finished up on Sitkalidik island just down the coast at virtually the same spot in Partition Cove where, in 1784, the Russians perpetrated a terrible massacre of local men, women and children. We have not refueled since Juneau so we need to take on fuel and change the oil in main engines and genset. Plus we need to re-provision.

The next place we can do this will be Dutch Harbor. There is a choice of restaurants one of which is The Old Power house Restaurant which was a modified Japanese restaurant and very good. Marty Owen and his wife, Marion, invite us to their home for dinner and we spend a delightful evening discussing places to visit on Kodiak Island. Marion is an award-winning photographer and her stunning pictures have appeared in numerous well-know magazines. We are continuing our journey on the morning of Thursday May 28th by which time we will have spent just over one week in Kodiak. We have learnt that AT&T has no coverage west of here so we have purchased a small, unsmart flip phone from CTI which should work in isolated spots.

I am posting this brief blog now because I can foresee that communications will be a challenge as we move west along the Alaskan Peninsula and out along the Aleutian chain of islands.