Vancouver Island to the Aleutians and Beyond - Part Four 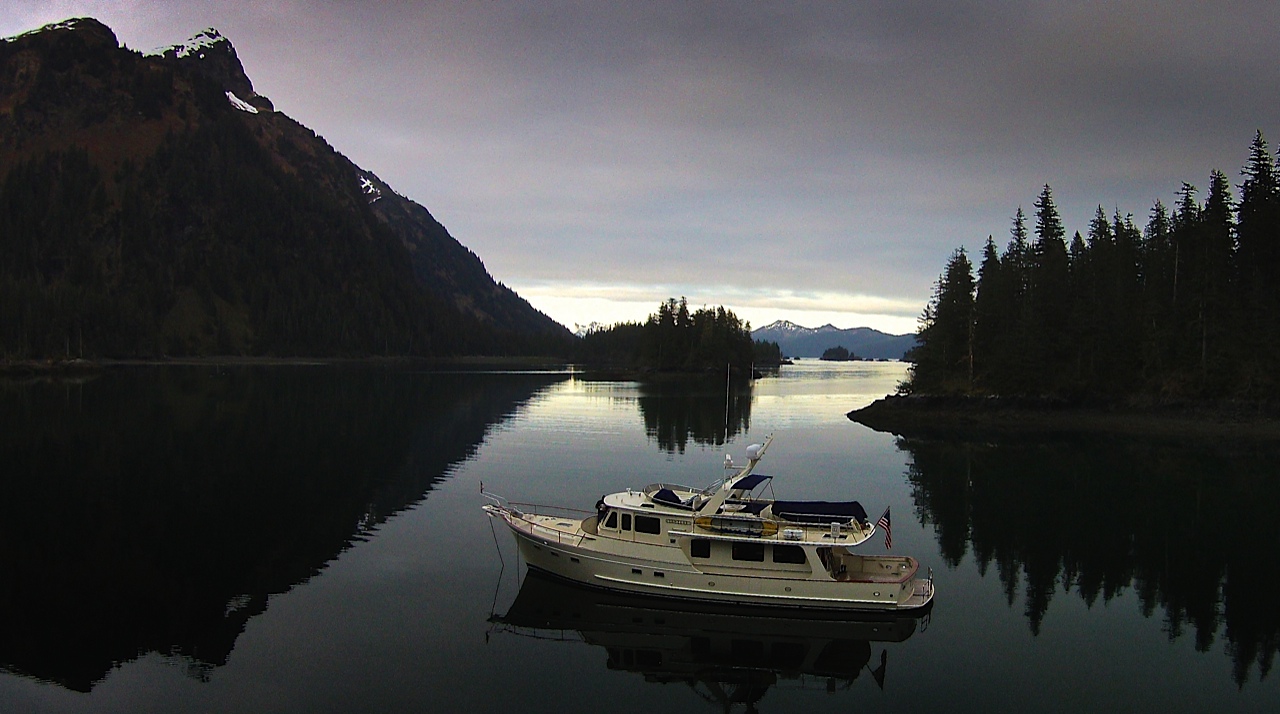 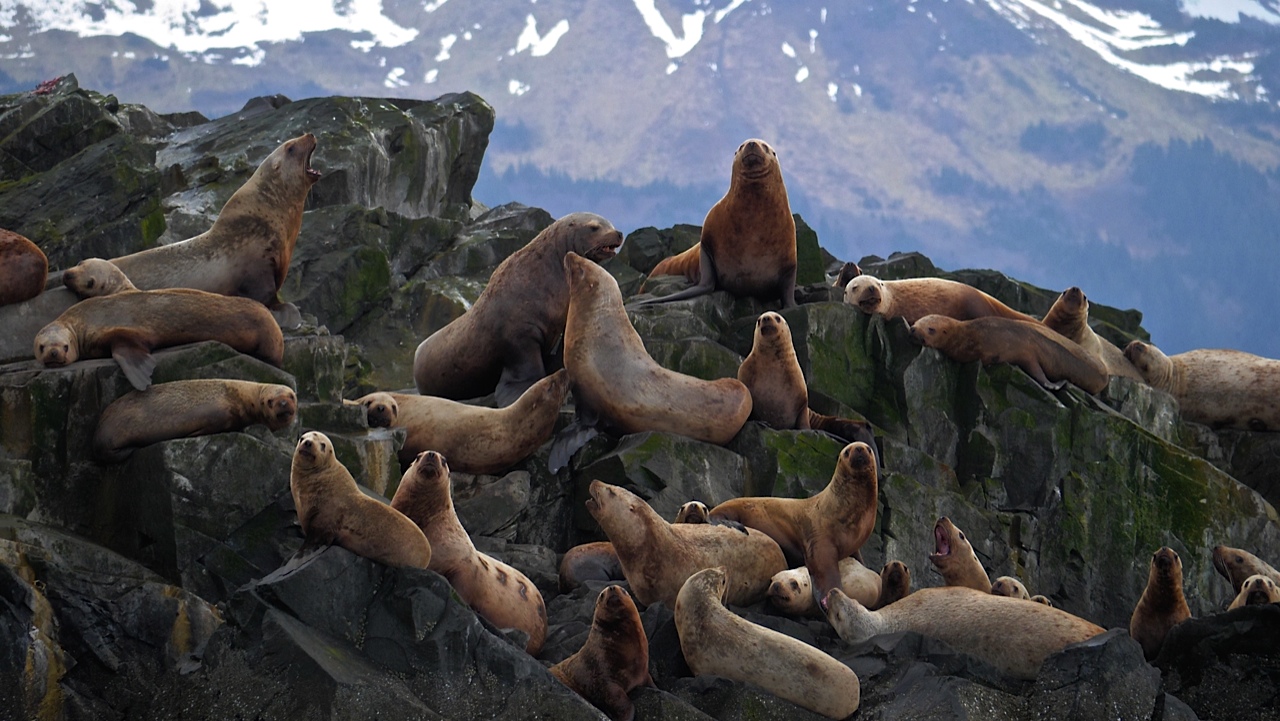 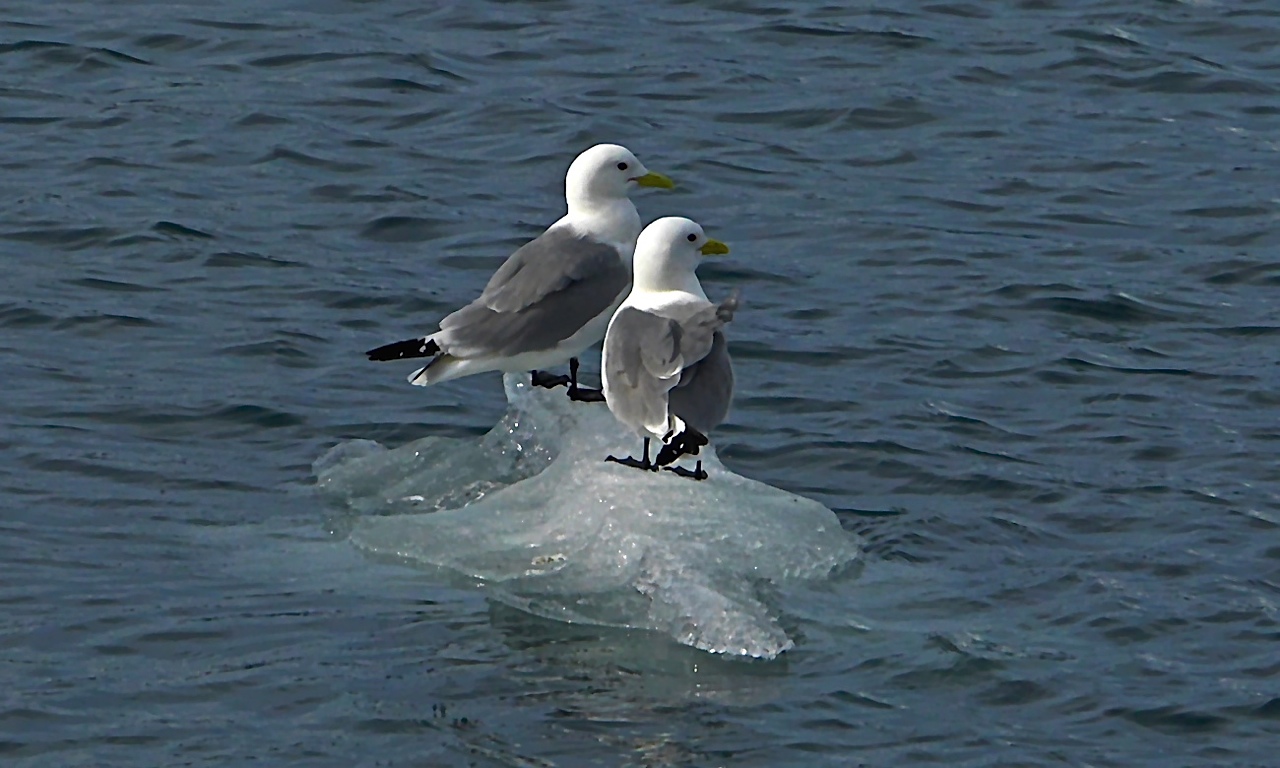 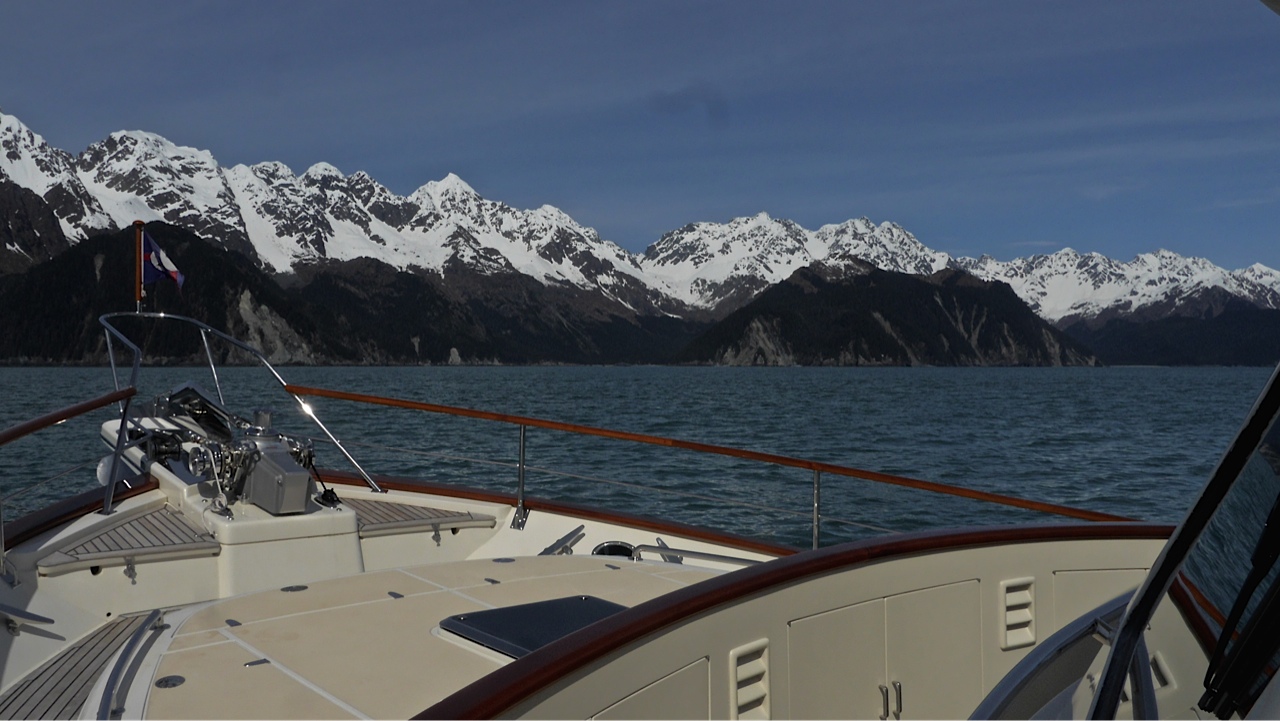 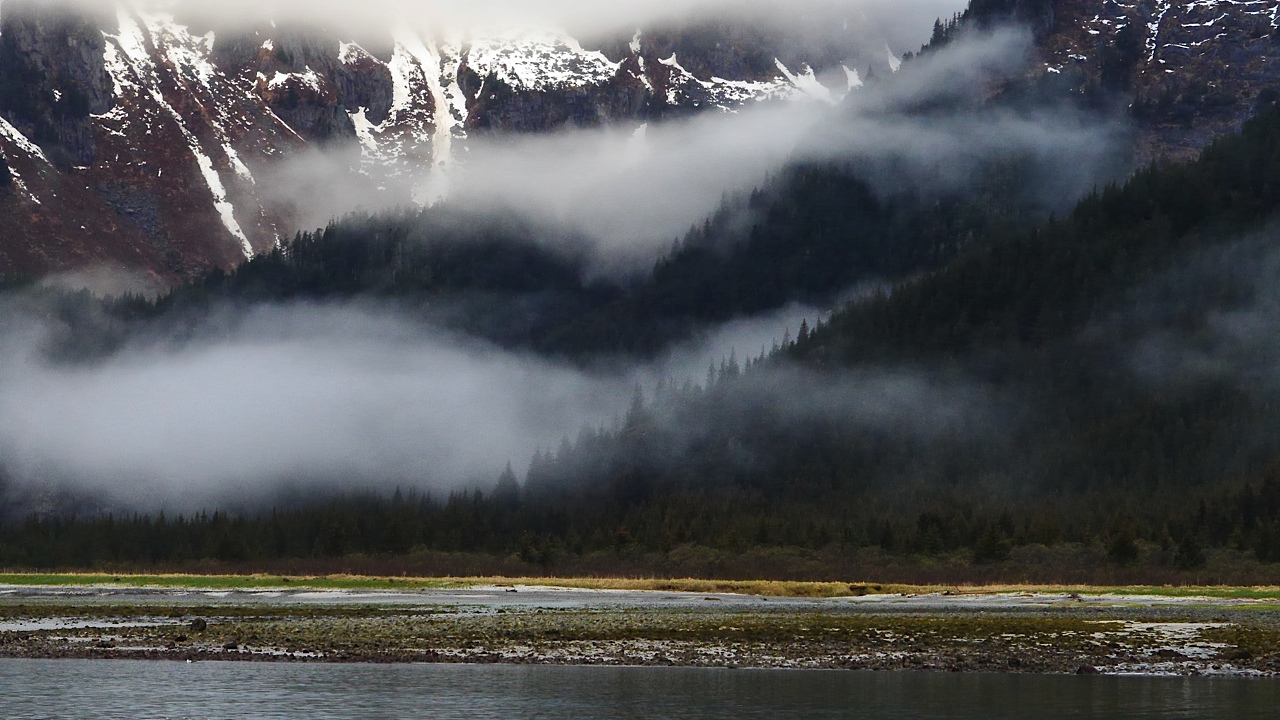 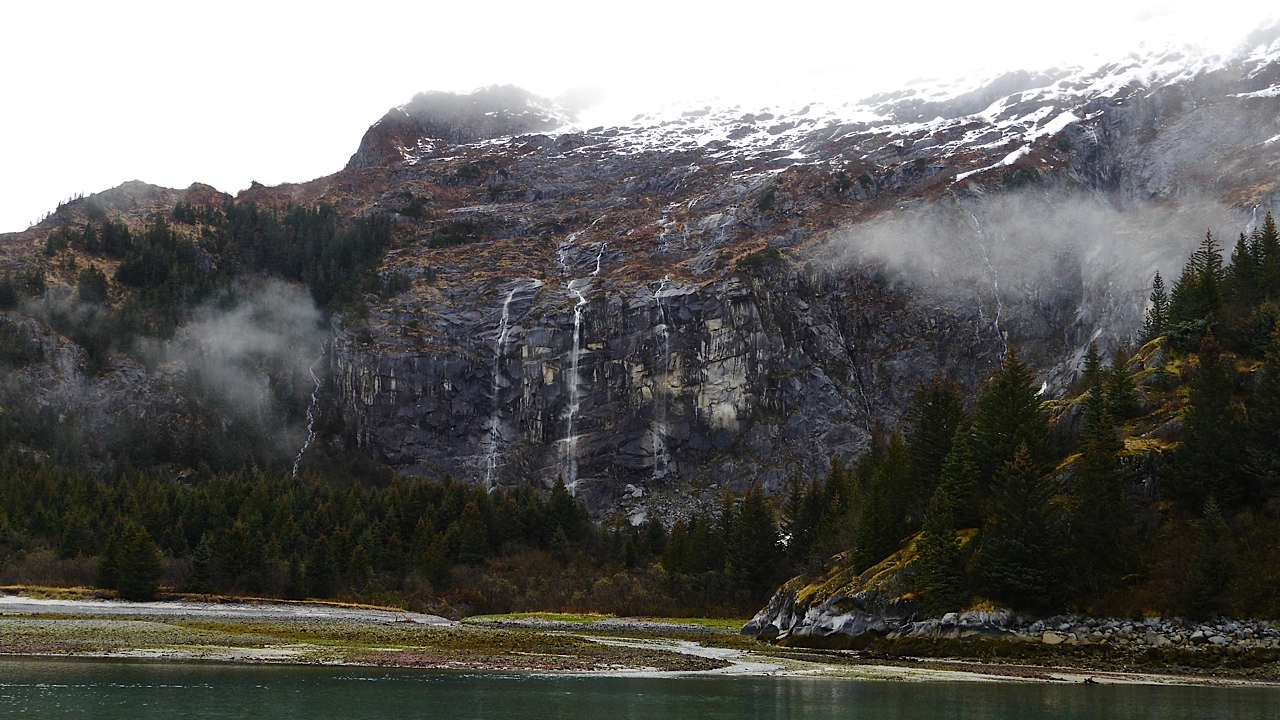 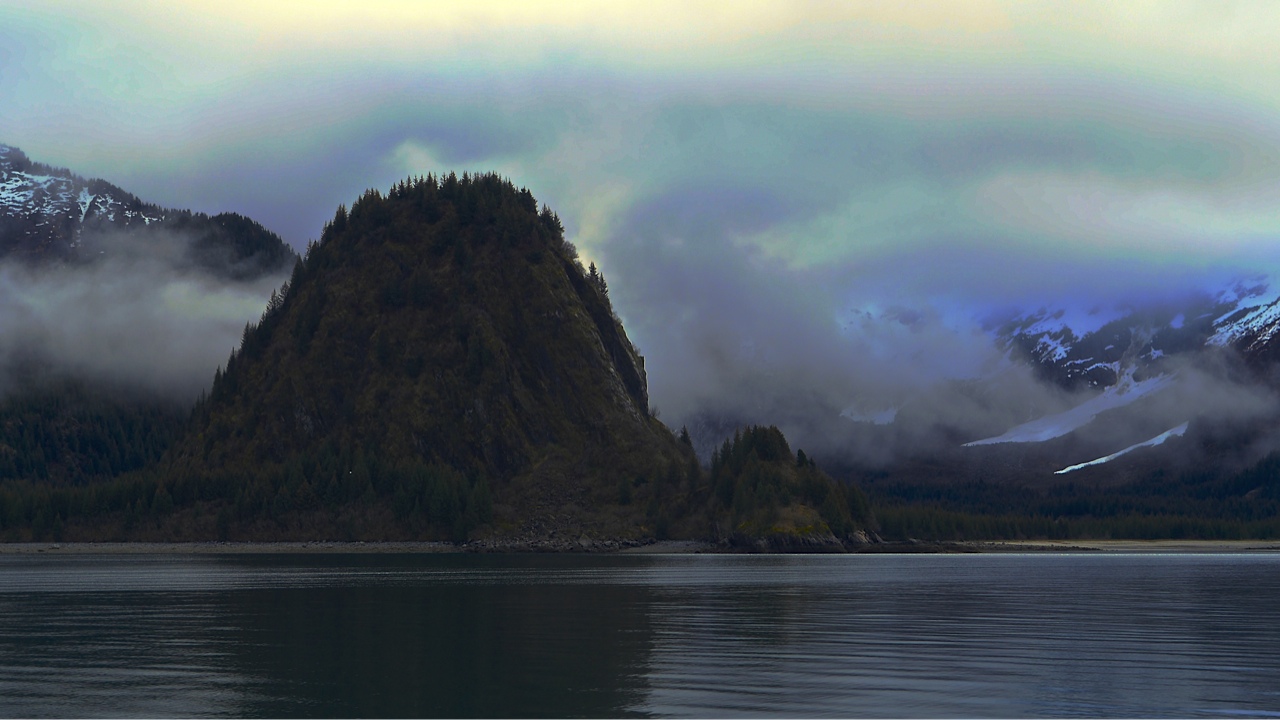 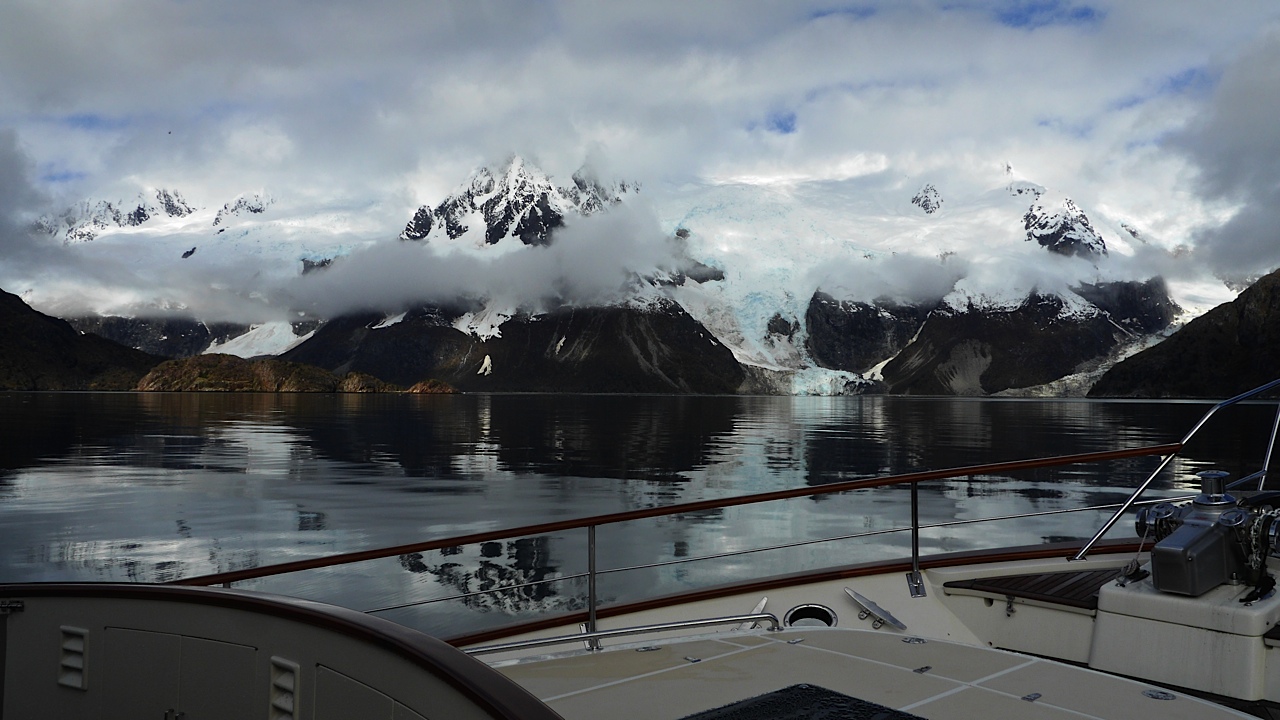 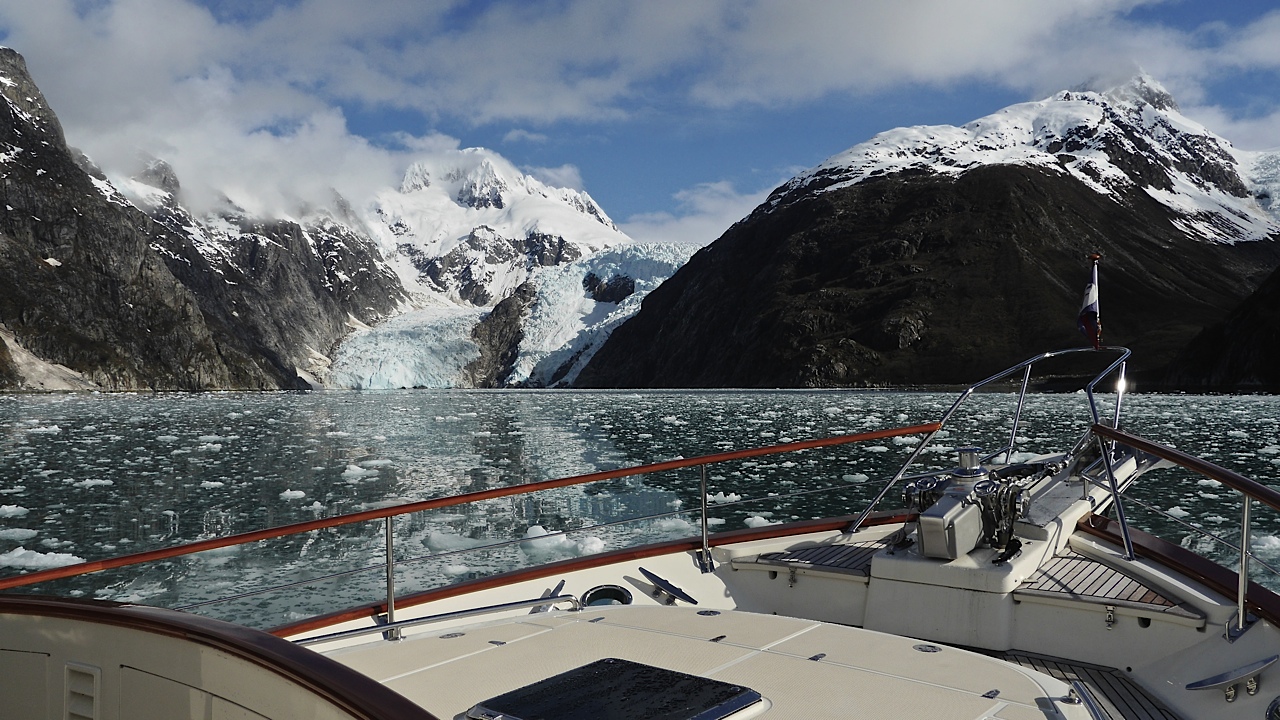 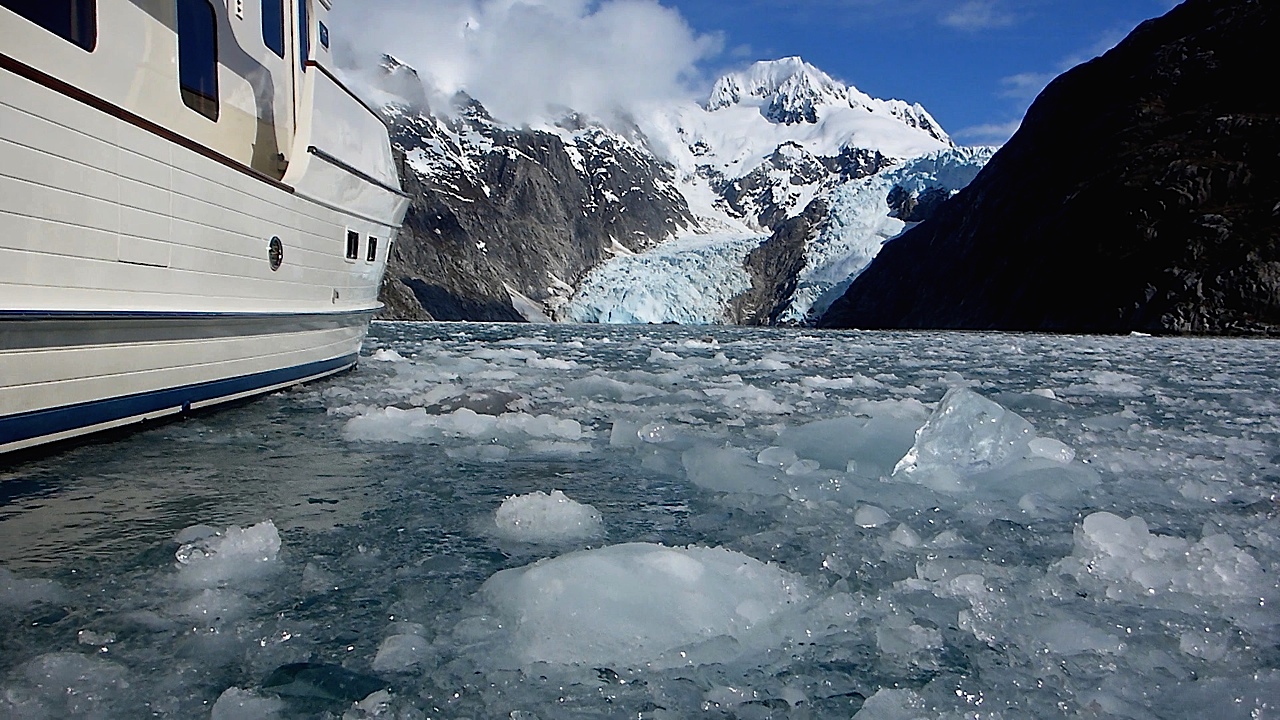 Camera on a boat hook 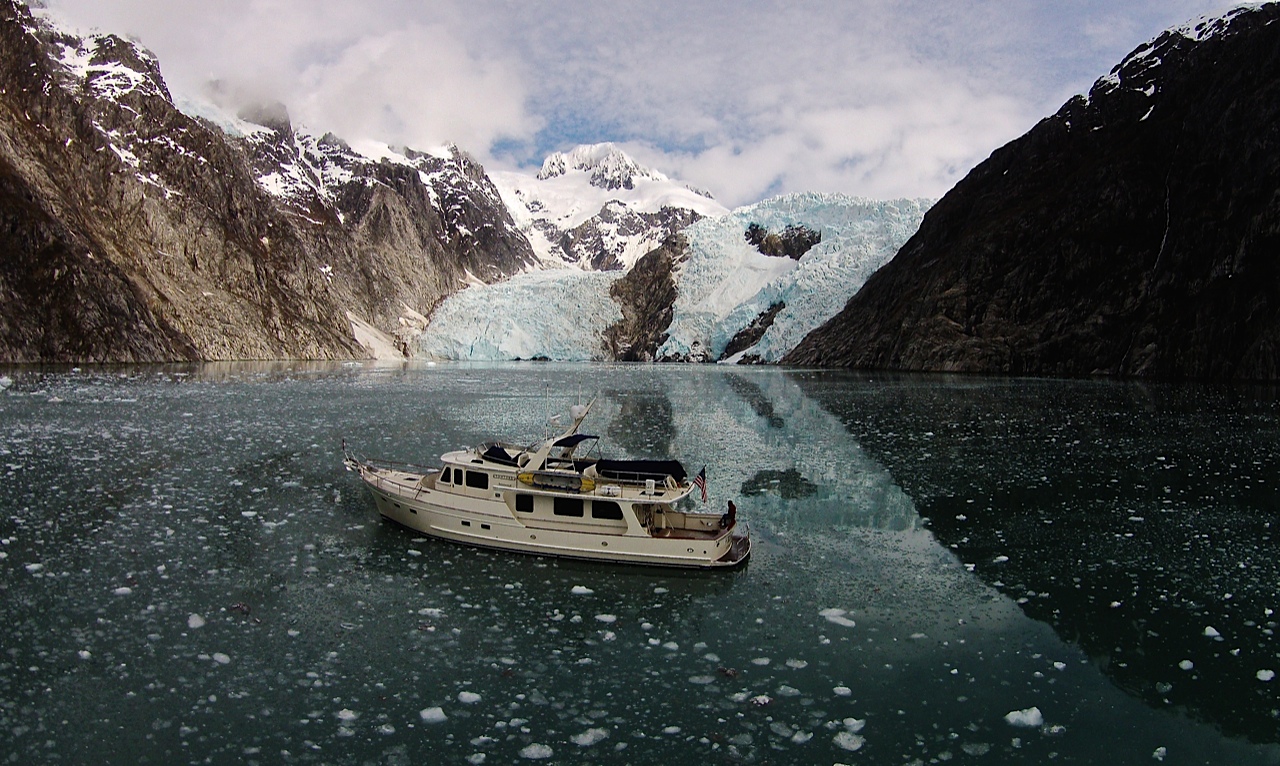 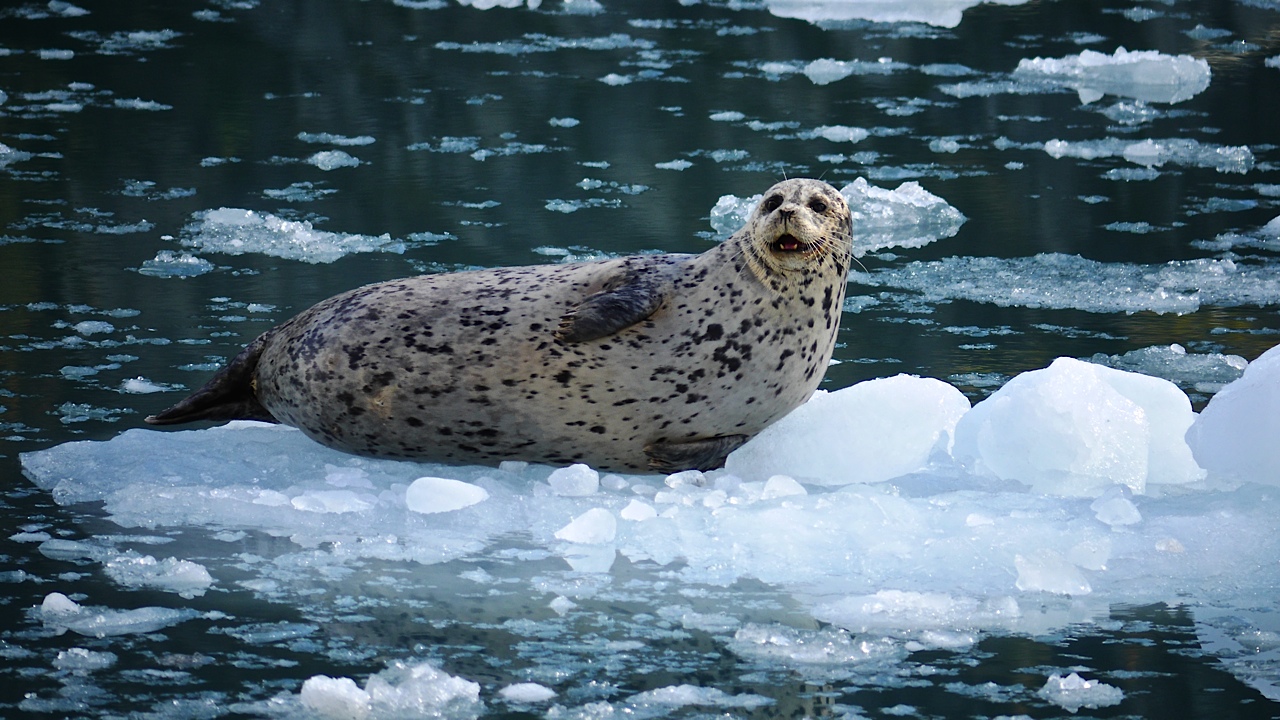 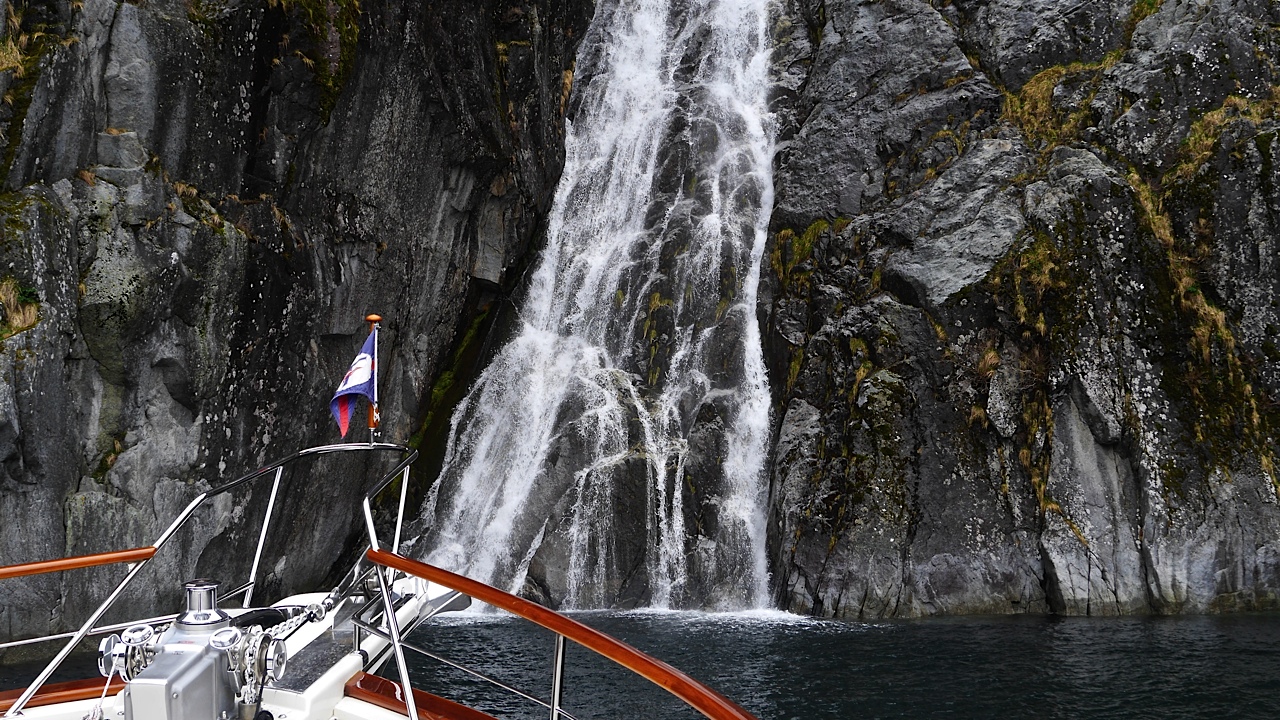 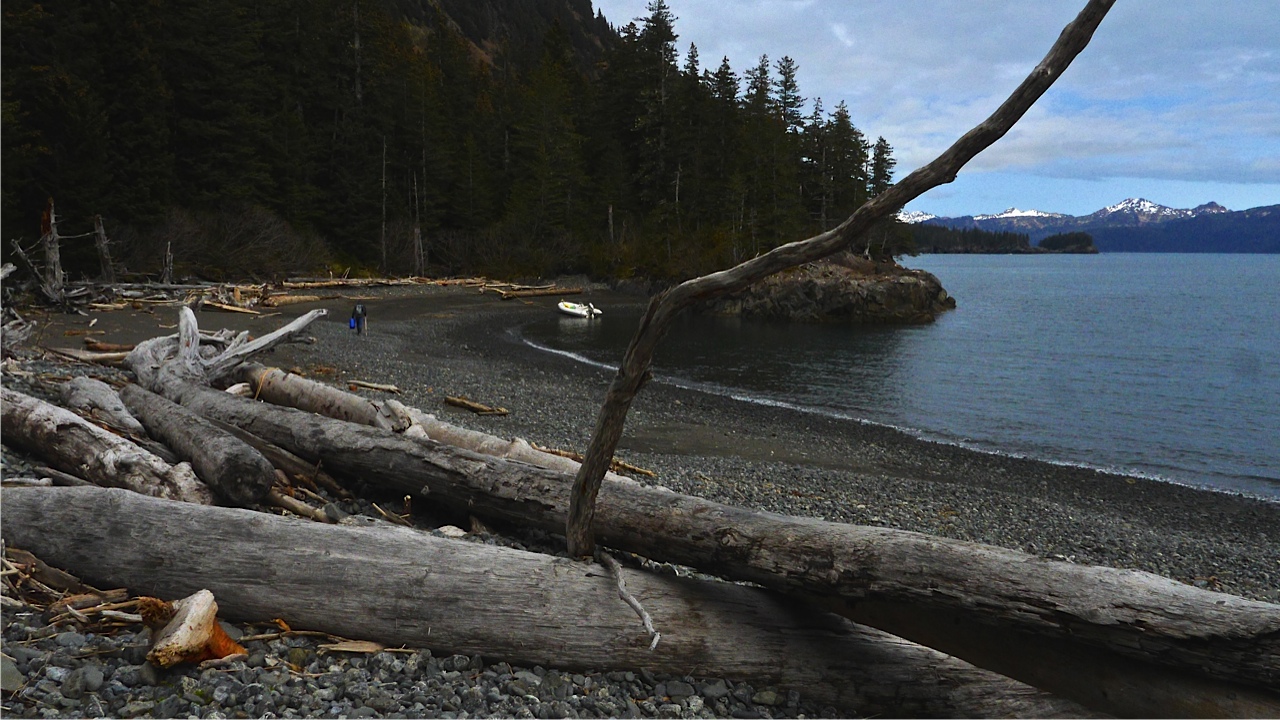 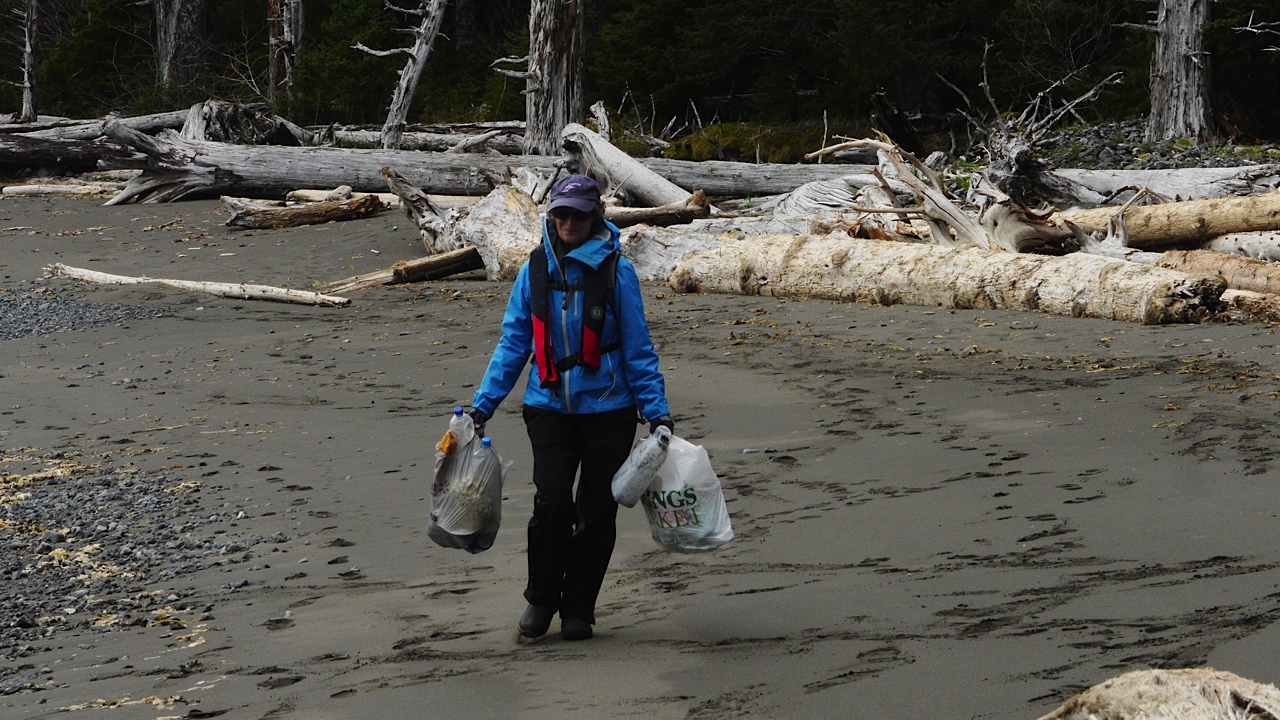 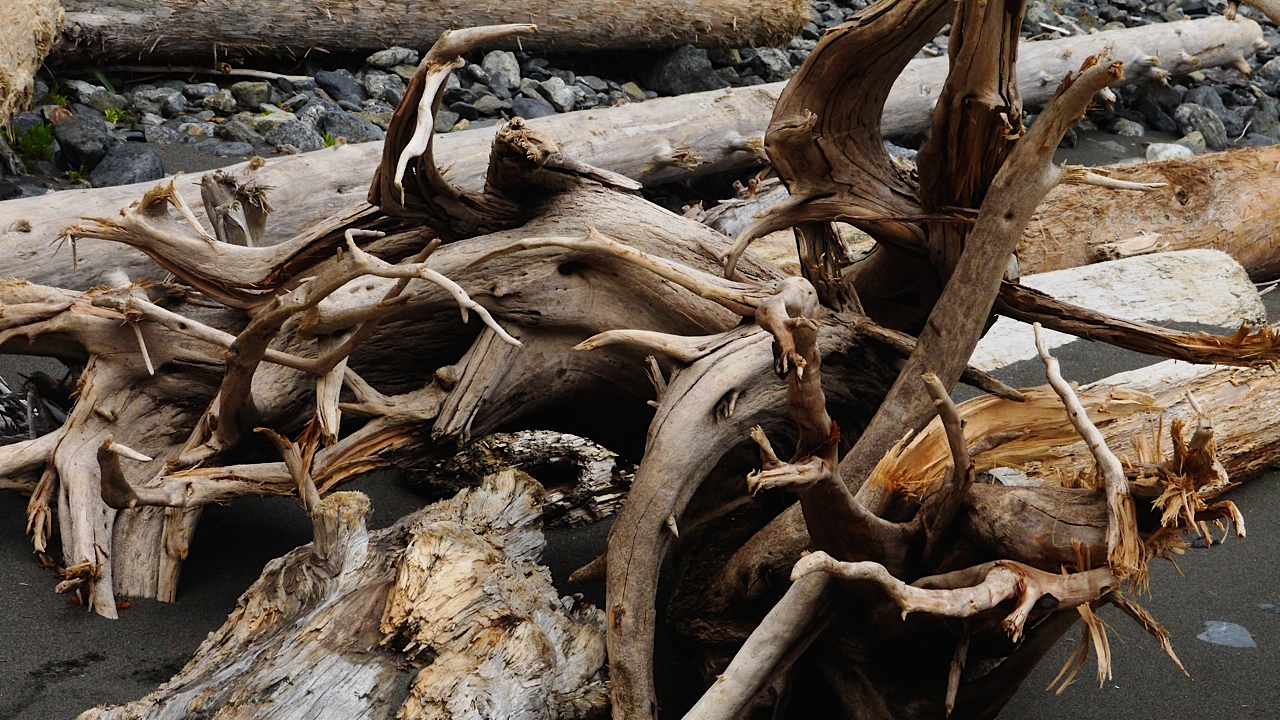 During our last few days in Cordova the weather alternated between slashing rain, accompanied by wind gusts to 44kts, and extensive blue skies with brilliant sunshine - switching from one to the other almost instantaneously. With calmer weather in the forecast we delayed our departure for a couple of days

May 11th
We cross the width of Prince William Sound in a mix of sunshine and showers which produce beautiful cloudscapes draped over snow capped mountains. We make a slight diversion to visit the Needle - an isolated spear of rock sticking out of Montague Strait. This is a haul out for Stellar sealions and there seem to be more animals than when we visited the same spot in 2013. We keep our distance and take photos using a telephoto lens.

We try to anchor in Squire Island Cove on Squire Island but the bottom is too rocky for the anchor to grip so we continue on to Barnes Cove off Drier Bay on Knight Island. This had been one of our favorite anchorages last time so we are pleased to make a return visit.

May 12th
We pass by the original site of Chenega village abandoned after it was destroyed with terrible loss of life during the devastating 1964 earthquake. We are on our way to revisit Chenega Glacier but, on this occasion, Icy Strait lives up to its name and we find our way blocked by floating ice. We first hear - and then see - the blow from a humpback whale cruising among the ice floes. A conversation over the VHF passes between two fishermen; one who had lost his nets in Icy Bay and the other who had just been able to remove his pots in time. We collect a small amount of glacier ice for our drinks.

We continue on past Flemming Island and down Prince of Whales Channel. We anchor in Foxfarm Bay on Elrington Island. After an iffy start, the clouds give way to clear blue skies. We launch the small tender to investigate a narrow, forested. isthmus to an exposed beach on the other side.

May 13th
The morning is calm and sunny and Chris proposes the first waterborne flight of one of our drones. With some misgivings we hand launch from the foredeck with Chris as pilot and myself as catcher - doing the release and capture. We are encouraged by the results of our first serious flight.

Once underway our route takes us into the Gulf of Alaska along a rugged coastline of near-vertical cliffs. Through binoculars we spot a significant number of white mountain goats. If not for their color they would be invisible. They browse in areas so perilous we cannot imagine how they reached or stayed there. We anchor in Bowen Anchorage off Day Harbor.

May 14th
The following morning we round even more dramatic cliffs at the tip of Resurrection Peninsula where flocks of Black Legged Kittiwakes are nesting and swirling around the crags. We loiter at the entrance to Resurrection Bay to take advantage of cell phone coverage to catch up on e-mails and internet weather. We do not continue down the bay to visit Seward at its head but turn south and make for the Kenai Peninsula. This is as far west as we reached in 2013. We turn into Aialik Bay and head to Aialik glacier at its head. We cross a shallow moraine and encounter quantities of brash ice. We sneak behind Slate Island where ice is less dense. Once in front of the glacier we drift in the ice and again use our drone. We release and capture from the foredeck with me holding the drone above my head for release and catching it the same way for capture. We feel this is involves less risk than having it take off from the deck with so many potential obstacles in the way. We consider anchoring in an un-named bay on glacier side of moraine but decide to try elsewhere when we see numbers of kayakers with an elaborate camp set up on the beach with more on the way. We move to the south arm of Coleman Bay but here the anchor fails to grip the rocky bottom. We backtrack to Paradise Bay where we are eventually able to anchor in more than 100 ft of water. The depth finder reveals an alarmingly uneven bottom profile and Chris spends most of the night in the pilothouse after the wind gets up.

May 15th
We exit the fjord and are briefly exposed to the gulf before turning into Granite Passage leading to Northwestern Glacier at its head. We cross the shallow moraine which is now some considerable distance from its parent glacier. Due to the misty rainy weather, we decide to anchor early and postpone our sightseeing until tomorrow when the weather is forecast to improve. We drop the hook in aptly named Ribbonfall Cove where multiple waterfalls freefall hundreds of feet down vertical cliffs.

May 16th
We awake to a spectacular morning with sun shining through ever-changing patterns of clouds. I am able to photograph the waterfalls before they are concealed behind skein of mist. We head for the selection of glaciers at head of Northwestern Fjord.. We pass north of Striation Island through brash ice and I take video using a waterproof camera clamped to the end of an extended boat hook. We see many seals and sea otters resting on the ice floes. In perfect weather we approach within 1/2 mile of Northwest Glacier in Northwest Arm. The scene is so breathtaking it is hard to stop taking photos. We launch the drone and shoot some wonderful video of Venture with the glacier in the background. It is almost midday before we can tear ourselves away. We return to the open gulf but, once again, the seas are not too rough. As before, the coastline is rugged with sheer cliffs. This would be a bad place to lose power. We pass through McArthur Passage where strong currents are flowing and head up the North Arm of Nuka Bay into Pilot Harbor. For a change, the anchor sets at the first attempt in 80 ft of water. This has been a wonderfully productive day but the use of four cameras with different formats means plenty of homework.

May 17th
The morning dawns calm but overcast with the sun trying to peek through. We are underway just after 10AM past distant views of towering, snow covered peaks and inland glaciers. The shore is lined with the bleached skeletons of fallen trees - their gnarled roots evidence that nature and not mankind had been responsible for their fate. We see others living on borrowed time - tottering on cliff edges with their roots already partially undermined.

We anchor in Tonsina Bay and, much to our surprise, find another cruising boat already at anchor. We see no sign of life on board and she departs in the middle of the night. We launch the big tender and make an excursion into a lagoon. We dare not linger for the tide is already on the turn. The depth of water in the narrow entrance is just six feet but the tide will drop 17 ft . We take the tender around a point to make a beach landing for some beach combing. We find nothing of real interest but collect a number of plastic bottles which we bring back to Venture for later disposal in Kodiak.

After dinner the bay is mirror calm with a nice light in the sky so we decide to do some more drone flying and take shoot some nice video and stills.

May 18th
The weather is overcast with light rain but the wind and seas are light. We go first to Gore Bay which, due to its topography, is a known catch-all for all kinds of flotsam. It is exposed to the gulf and we cannot get too close. Despite poor visibility we can just make out enormous quantities of trees and logs piled high on the beach interspersed with colorful flotsam and jetsam. Rounding Gore Point we again spot a number of white mountain goats perched on the precipitous cliffs. We pause at a beach on the backside of the peninsula. I seriously consider going ashore and walking through the narrow neck of land to reach Gore Bay but it starts to rain so decide against it. We cruise the length of Port Dick whose steep slopes are a web of spidery waterfalls. We attempt to anchor in Taylor Bay but the shoreline shelves are too narrow with severe drop off which makes them unsuitable for safe anchoring. We see a couple of places where, due to ferocious williwaws, the trees appear to have blown up hill rather than down slope. We backtrack down Port Dick and anchor in Sunday Harbor.

Tuesday May 19th
Awakened by the alarm at 0430 we are underway for Kodiak at 0505. The weather is grey with slight drizzle but seas quite reasonable and a few degrees off the bow. The wind increases to 20 kts at the latter end of the crossing but conditions are not bad. We arrive in Kodiak at 1545 after 104 nautical miles underway. There is no berth immediately available so have to wait in the harbor before being allocated a place in St Paul marina close to the center of town. The harbor is busy as the fishing boats are in port awaiting the start of the season plus it is Crab Fest with a number of local activities. Our arrivals often seems to coincide with local parades. Last here it was in Ucluelet on Vancouver Island and in 2008 we were treated to marching pipe bands on Prince Edward Island on the east coast of Canada. We have internet after a hiatus of several days and plan on spending a few days here.