Vancouver Island to the Aleutians and Beyond - Part Fourteen 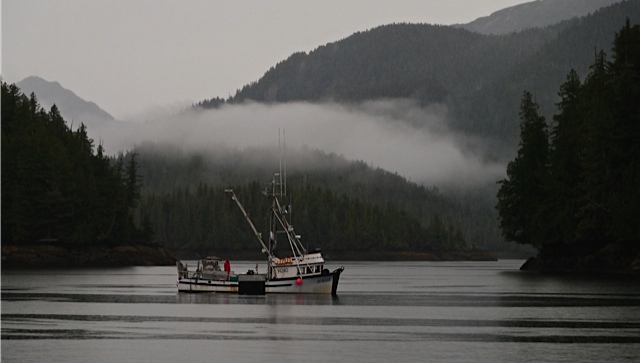 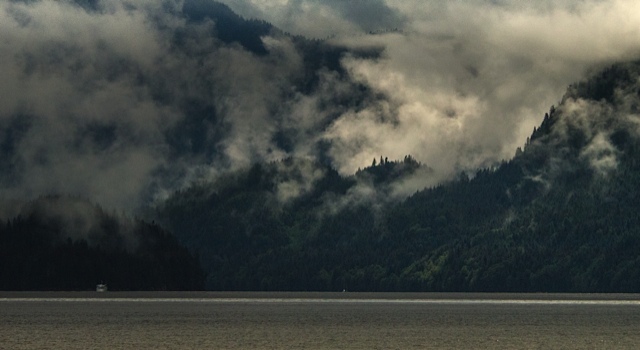 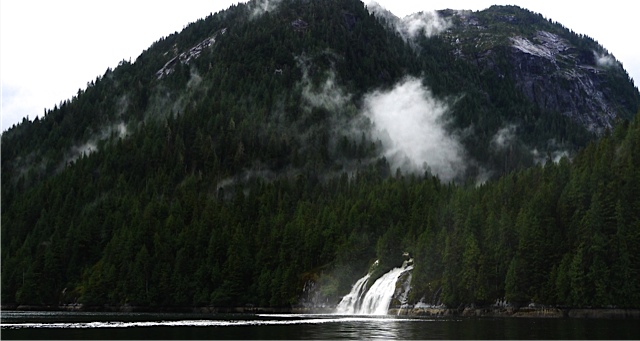 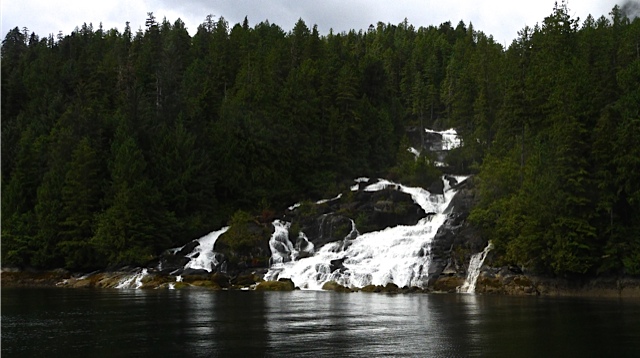 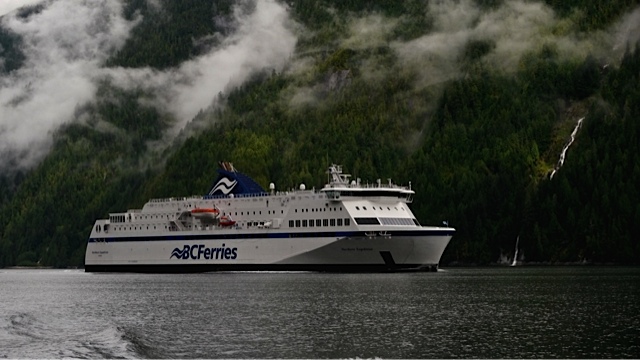 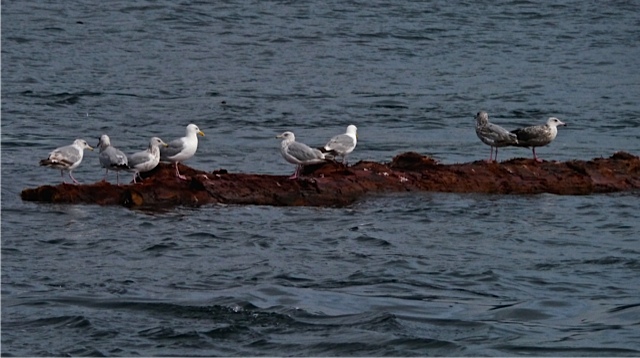 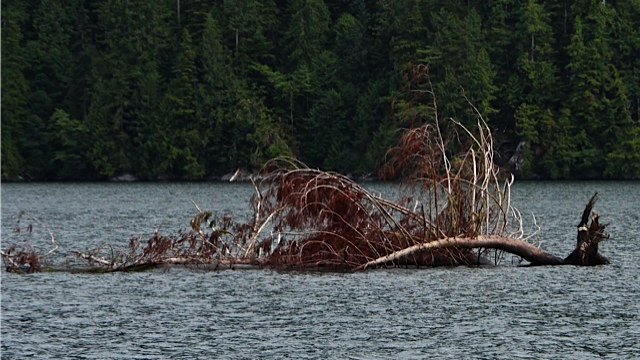 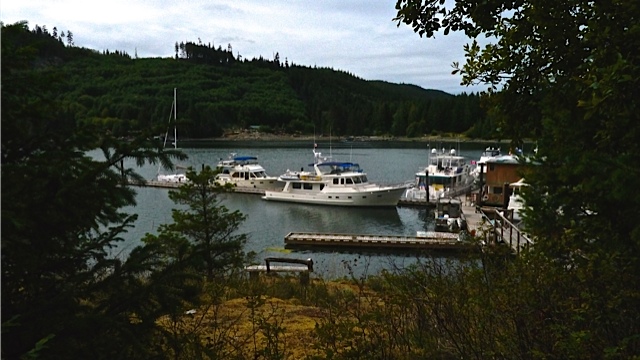 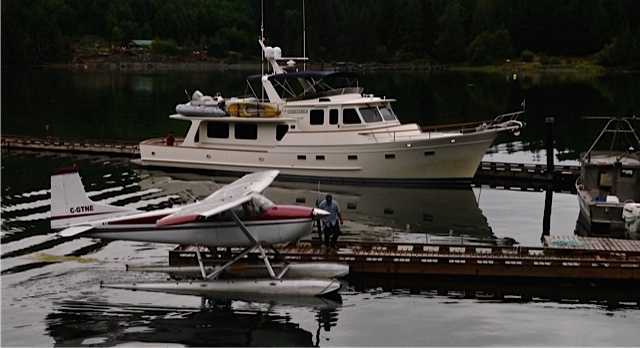 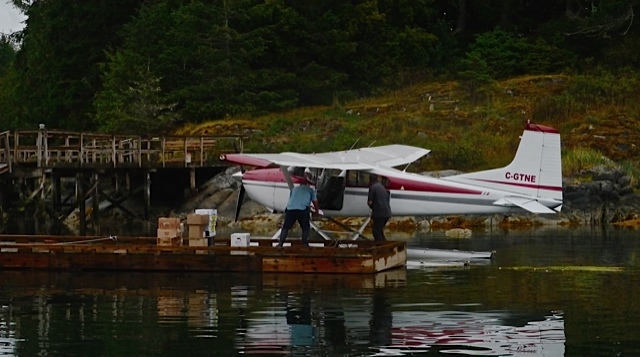 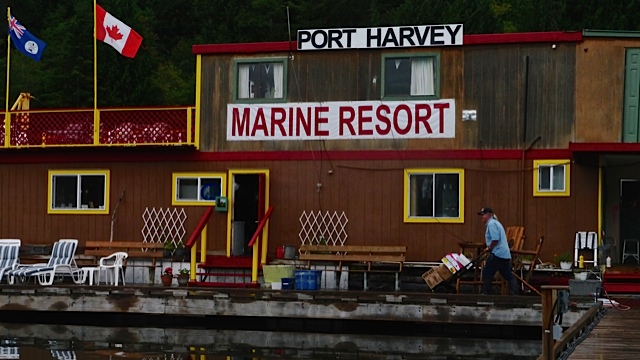 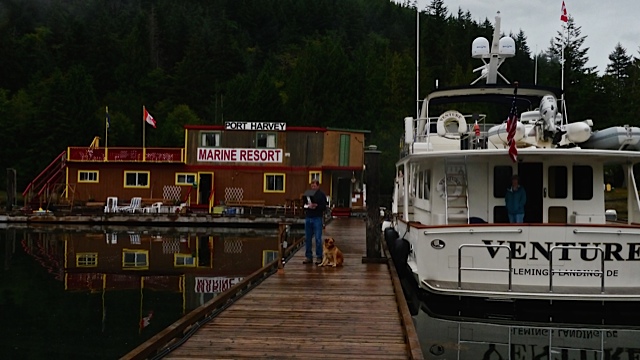 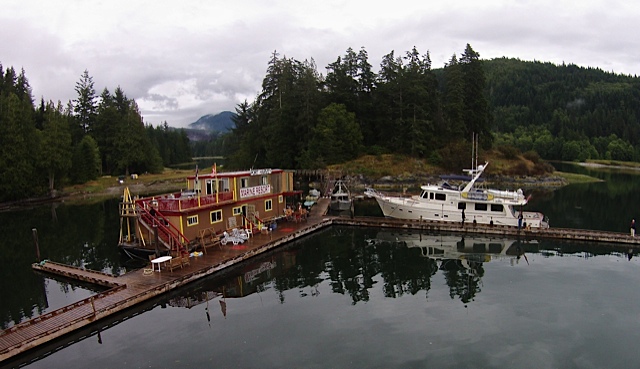 iDrone view after most boats have left 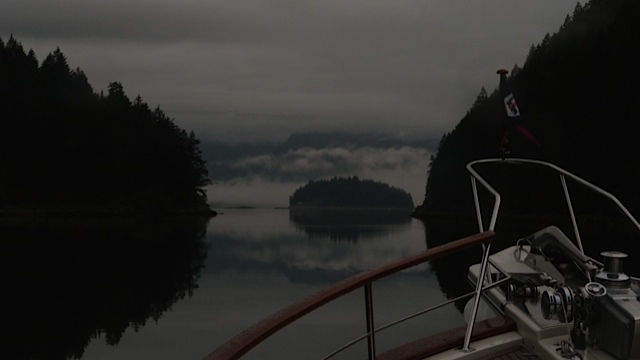 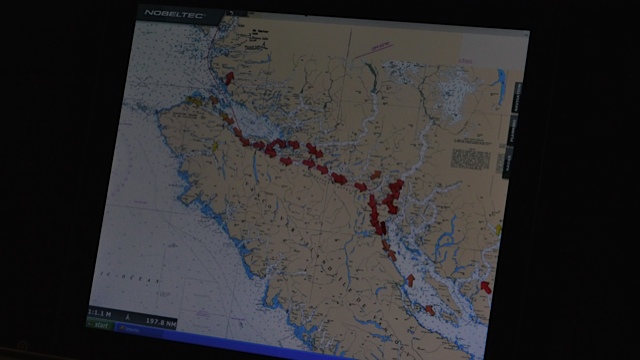 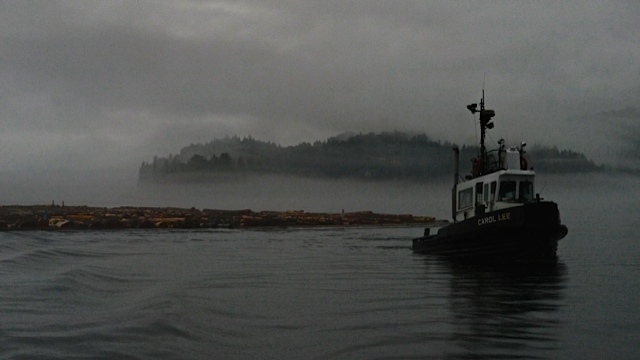 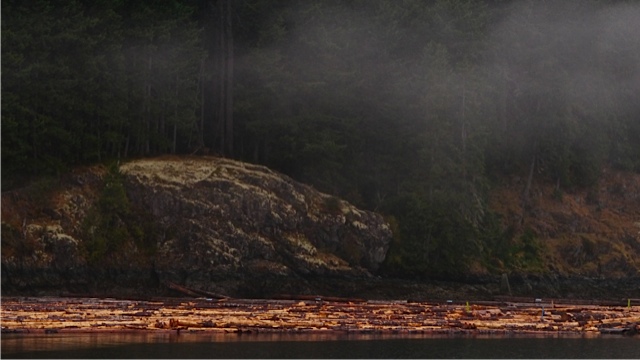 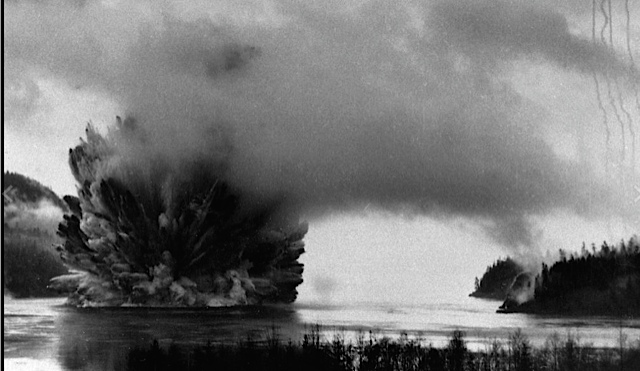 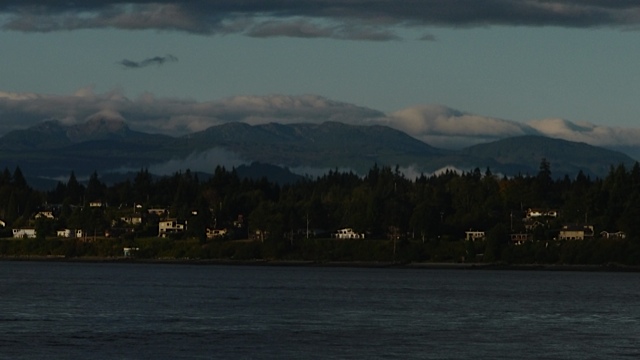 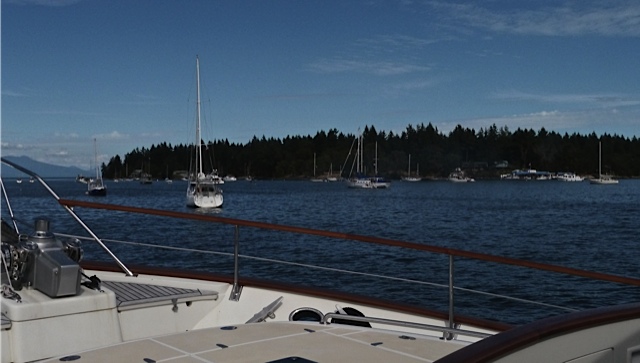 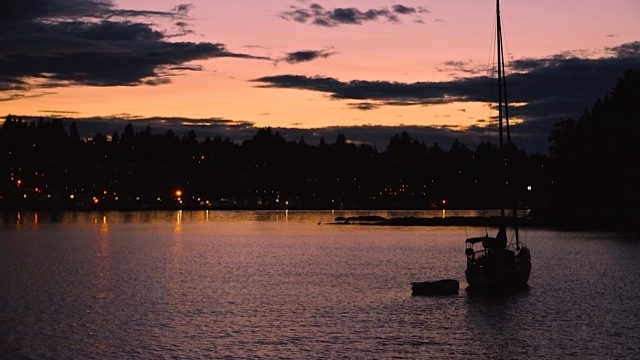 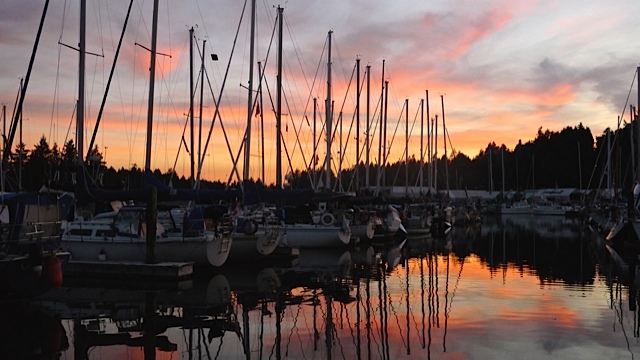 I wrote my last blog as we were crossing Dixon Entrance on our way to Prince Rupert. We cross the invisible Canadian border at 0853 on August 2nd and enter Prince Rupert harbour at 1309 through the back entrance past the First Nation settlement of MetlaKatla. We clear customs by phone and continue on our way as the yacht club has no space. There is a time-change here and we anchor in the ominously named Exposed Inlet well down Grenville Channel at 1824.

We continue down Grenville Channel amid an amazing number of waterfalls. This must be because of rain because, unlike previous years at this time, there is no snow on the mountains. Mist drapes the heavily wooded slopes and creates dramatic cloud effects. Boats, including Venture, are dwarfed by their surroundings. There are many logs and even full-sized trees floating in the water, many providing a perch for birds. We see many whales but all off in the distance. We are overtaken by the BC ferry Northern Expedition which had been sailed over from Germany to replace the ferry that sank in 2006. We have the current with us in early part of journey, increasing our speed over the ground from 9.5 to 14.9 kts. We anchor in Bottleneck on Roderick Island at 1615 in water as green as jade and studded with Napoleon Gulls. There is already one boat at anchor and we are joined by two more during the course of the evening.

We are underway at 0657 under gloomy conditions and steady rain. Again, there are many logs and trees to be avoided. We meet the BC ferry, Northern Expedition, heading back north to Prince Rupert from Port Hardy. Since crossing into Canada, fish farms - which are banned in Alaska - are once more in evidence and plentiful. There also seems to be a noticeable difference in attitude towards pleasure boats by commercial fishermen. In Alaska there is a camaraderie between the two groups but here, it has been our unfortunate experience that some of those who fish for a living act aggressively towards pleasure boats. Today, one turns abruptly through 180 degrees right across our bow when less than 100 meters distant. This happens too frequently to be mere happenstance and, after more than 60,000 miles of cruising, we have had this experience only in western Canada.

We enter our chosen anchorage in Fury Bay and are initially discouraged by number of boats sharing this cozy anchorage. There are nine other boats including a De Fever 50 and an old Alaskan as well as a 36 Europa. After so many months of having an anchorage to ourselves, we need to make adjustments!! I am struck by the notion that each vessel is a discreet world with its individual community ranging from one person (with dog) to perhaps as many as six. The average number seems to be two. We have salmon for dinner and hear the rain pitter patter all night.

Today is the day we cross Queen Charlotte Sound - the second area along the Inside Passage which is open to the Pacific Ocean. We are underway at 0747 in the rain. Initially we have some swells on the beam but later these move aft and, together with a wind of 15 kts - also from aft, provide a comfortable ride. The day turns out to be beautiful with big clouds piling up over Vancouver Island. Shrouded in mist, Cape Caution appears very dramatic. We see quite a number of boats most of which are heading south. We tie up at North Island Marina in port McNeill at 1442. It is almost exactly 4 months since we were last here - on our way north. Since then we have traveled 4478.42 nm. This is a great place to stop. You can learn more about it at: http://www.youtube.com/watch?v=z_mvviYNDXo&sns=em

We do not need to take on fuel as we carry more than enough to take us from Sitka to our final destination on Vancouver Island. We head down Johnstone Strait and turn off at West Cracroft Island for the small marina at Port Harvey where we arrive at 1503 and are welcomed by the proprietors, Gail and George. We engage in conversation with fellow boats many of whom follow our adventures on line and which, they tell me, inspire them to follow our routes and emulate our adventures. Small intimate marinas like this are wonderful places to meet fellow boaters and exchange stories. Last time we were here we met the owners of Fleming 50-001 - our very first boat. We have an excellent dinner at the Red Shoe Restaurant and enjoy fabulous cheesecake. This certainly a great place to stop for anyone heading up or down Johnston Strait. www.portharvey.blogspot.com

I start the day with another visit to the Red Shoes for complimentary coffee accompanied by a monster cinnamon bun with icing and walnut. A floatplane arrives from Campbell River with supplies - providing a good photo opportunity for stills and video to demonstrate how life works in these remote places. We also fly the drone before getting underway at 0935 and continuing south down Johnstone Strait. The timing is not right for Seymour Narrows so we turn into Small Inlet for the night and drop anchor at 1524. Despite Alaska's reputation for voracious, man-eating mosquitoes, tonight in BC we encounter the first mosquitoes of the trip.

Seymour Narrows is infamous in this part of the world. It is situated along the main north/south thoroughfare. Huge volumes of water pass through it at every change of the tide especially at springs when the current can run as fast as sixteen knots. Until 1958 when its top was blown off in what was billed as the largest non-nuclear man-made explosion, a submerged reef called Ripple Rock made passage through the narrows even more dangerous. Seymour Narrows still deserves the greatest respect and we are underway at 0704 to pass through it before the current builds to the predicted 10 kts. It is raining - occasionally quite hard - with mist turning to fog. Definitely not ideal conditions for Seymour Narrows (See-less Narrows?). Fortunately it clears slightly as we approach the narrow spot where the current is already running fast enough to increase our speed from 9.5 knots to 16 kts. We pass directly over the remains of Ripple Rock and the swirling water pushes Venture back and forth. The fog returns and through the murk we can just make out the tail end of an unflagged raft of logs being towed by a diminutive tug with no AIS.

25 knot headwinds are predicted for Georgia Strait so we decide to anchor in Gowlland Harbour and continue south tomorrow when the winds are expected to diminish.

We are underway at 0700 for what proves to be an uneventful journey down Georgia Strait. The sea is not too bad but we decide to stop in Nanaimo where we anchor in the bay rather than going to the marina. We launch the tender and visit the Dinghy Dock Pub on Protection Island. The anchorage is filled with many kinds of boats. Float planes come and go and, as the sun goes down, we watch the lights come up in the onshore high-rises. We are definitely back in civilization.

On the last morning of our long journey we are underway at 0650 to arrive at Dodd's Narrows at slack water. Four and a half hours later we arrive at Delta Marine Services near Sidney on Vancouver Island. We departed here April 8th 125 days ago during which we covered 4928 nm - equivalent to 5674 statute miles or 9131 km. Apart from the four nights we were underway at sea, we spent 50 nights at anchor and 71 at a dock - the latter number being relatively high because of the extended time we spent at towns like Cordova, Kodiak and Dutch Harbor. (More correctly, this should be Unalaska as Dutch is merely one of several harbors in the town of Unalaska). We traveled as far north as 60 degrees, 37.2 minutes in Cordova and as far west as 166 degrees, 34.2 minutes in Unalaska. As is usually the case, most places were quite different from how we had imagined them before our visit. We met many wonderful people who were exceptionally welcoming and friendly.

This is my final blog for another amazing trip. Videos will be forthcoming in due course and will be uploaded to You Tube. Links will be posted on this website so keep checking in.