Vancouver Island to the Aleutians and Beyond - Part Thirteen 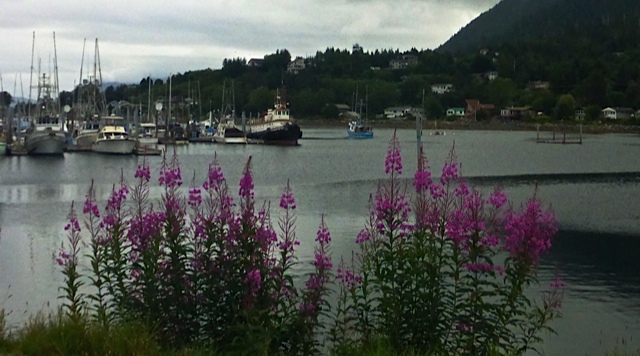 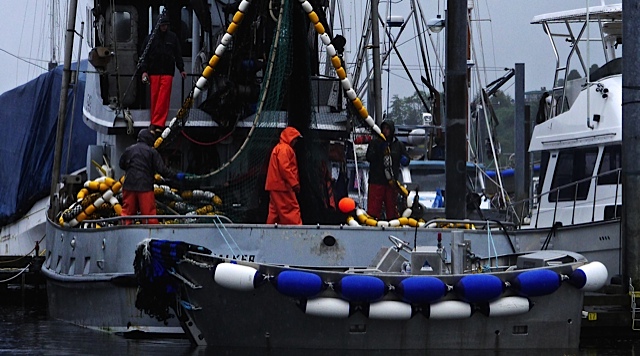 Fish boat crew in the rain 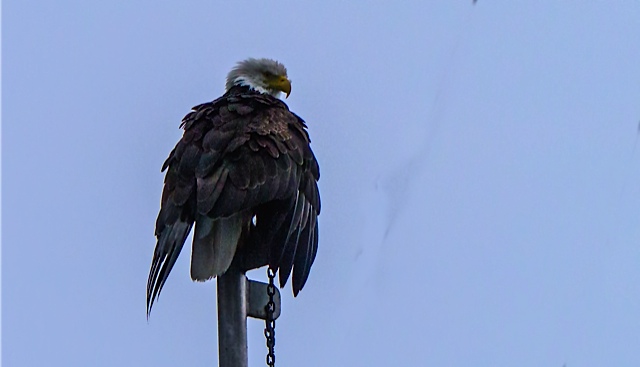 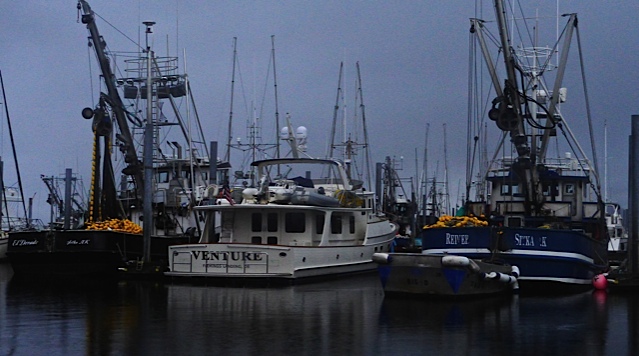 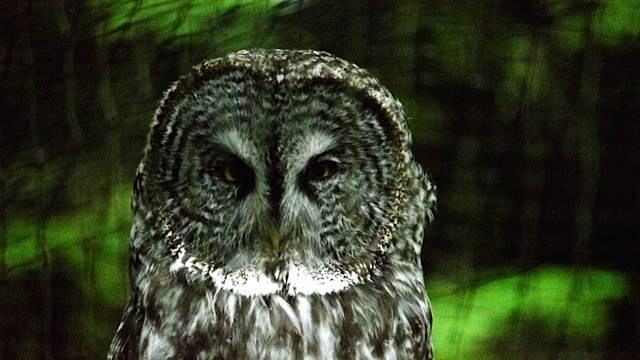 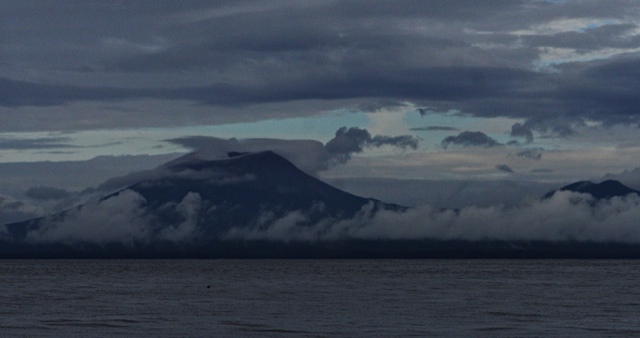 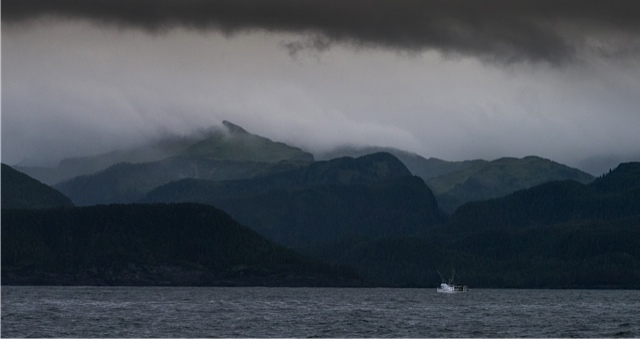 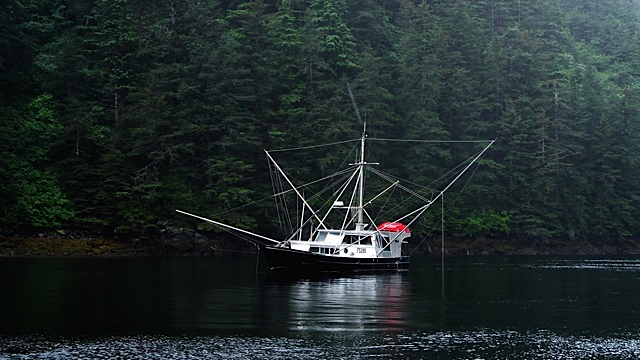 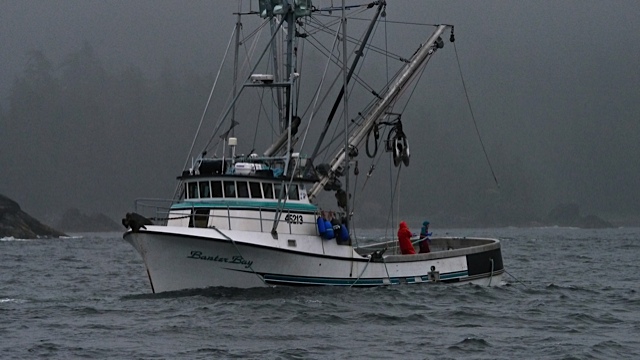 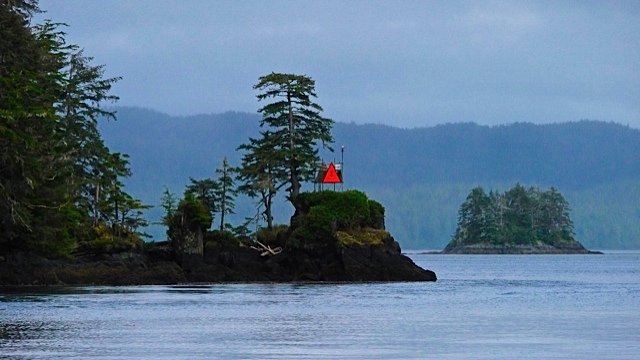 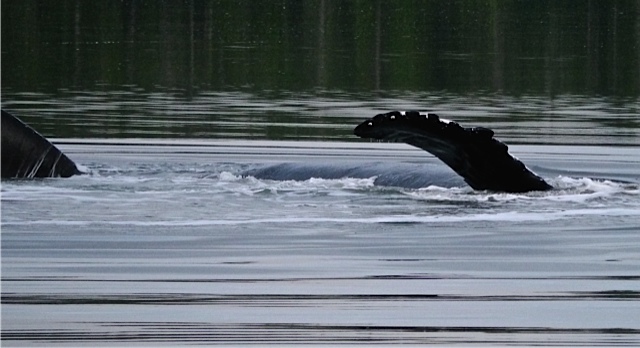 When we arrive in Sitka on July 25th, many of the slips in Eliason Harbor are vacant because the commercial fishing boats are out at sea earning their living. Here we notice many more transient pleasure boats than we have seen on the entire trip. I am surprised and pleased to see they include a Fleming 65. Unfortunately I am unable to make contact with the owners who are away when I visit the boat. There is also a sailboat from Glasgow and another, flying a Japanese flag, which we had last seen in Sand Point.

After the first day it rains almost nonstop until we leave on July 30th. Steve leaves us here and we are joined by Louisa from Taiwan. The next flight after hers was diverted and had an unscheduled landing on one of the remotest and most distant Aleutian Islands - so she almost went there!

During our time in Sitka we visit the Alaska Raptor Center where we have an opportunity to meet face-to-face with owls, eagles and hawks who are recovering from injury - sadly, many from gunshot wounds.

The vacant slips fill up with returning fish boats but empty out again two days later just before we ourselves take our leave on July 30th. On that day we leave the slip just after six AM and head for the fuel dock where we top up our fuel tanks. We decide to head directly south and take the outside route down the west coast of Baranof Island. The alternative would be to head back north and take the inland - and more protected - route through Peril Strait but this will add an extra day between here and Prince Rupert. The coast is broken up with small islands and skerries which prove quite a maze to work through. We have to keep a sharp lookout and sometimes need to alter course to avoid the many boats fishing along this dramatically rugged coast. Initially, seas in the open ocean are tolerable but become increasingly uncomfortable - especially for Louisa on the first day aboard. We change our plans and tuck into Puffin Bay near the south west tip of Baranof Island where we drop anchor at 1422. It is calm in the tight, tree-girt anchorage but the rain falls in a steady downpour. During the evening we are joined by a fishing boa and we imagine he is surprised and not too pleased to see us in this tight anchorage.

The rain ceases during the night and we are underway the following morning just after 0630 with mist draping the trees. The fishing boat has already left. The ocean is quite bumpy but much better than yesterday. Nevertheless we decide to tuck inland rather than taking the more direct outside route. The weather improves steadily during the day and turns into a truly beautiful evening. We see signs of numerous whales but they are far away and tend to disappear as we approach. We anchor in Dunbar Inlet on Sukwann Island just after seven in the evening having covered 115 miles. We see three black bears on three different beaches fringing the bay. Sunset is now as early nine pm - having been as late as 1140 in Dutch Harbor.

The month of August celebrates its arrival with a beautiful still morning. We are underway at 0600 and see whale blows in the distance. They have mostly disappeared by the time we reach the spot but I am able to photograph one humpback fin and part of the tail. The mirror-calm water reflects the silvery light and mist. We are back in logging country and we have to pay attention to avoid the many logs littering the water. Fortunately they are easy to spot under these conditions. This is not always the case and the price for striking hitting one of these discards can be as high as rendering your vessel disabled and adrift.

Dixon entrance is the body of water which has to be crossed when traveling between Prince Rupert in Canada and Ketchikan in Alaska. It is the most northerly of the two sections where the Inside Passage is open to the Pacific Ocean. It has the reputation of having nasty weather and cruising boats often have to wait for good conditions to cross it. Today, as I write this, it is flat calm and even glassy with wonderful reflections and views of cloudscapes over the distant mountains. We are bypassing Ketchikan but will be in Prince Rupert tomorrow morning, August 2nd, to clear customs and enter Canada. For this portion of the trip we are making passage rather than leisurely cruising. We have been away for just on four months during which we have traveled around 4,500 nm with quite a few still remaining before we reach Vancouver Island.