Vancouver Island to the Aleutians and Beyond - Part Twelve 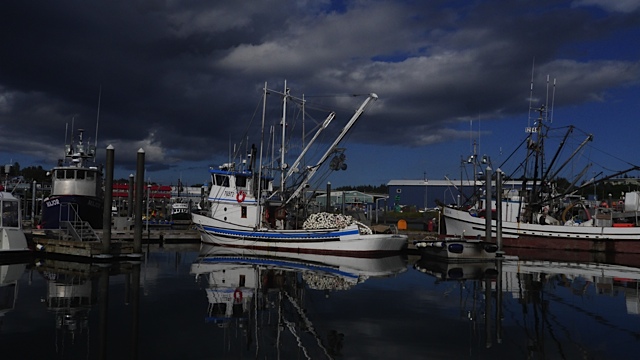 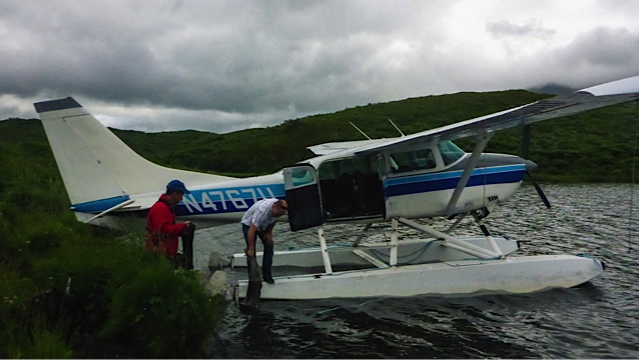 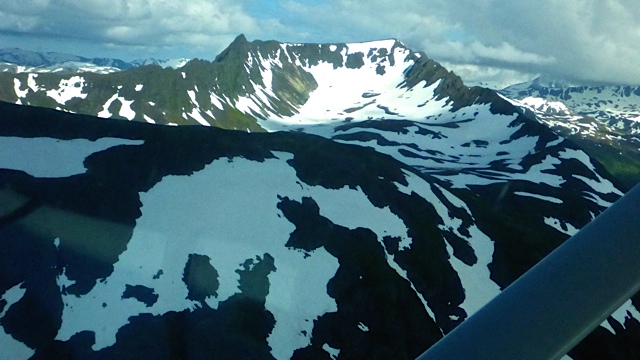 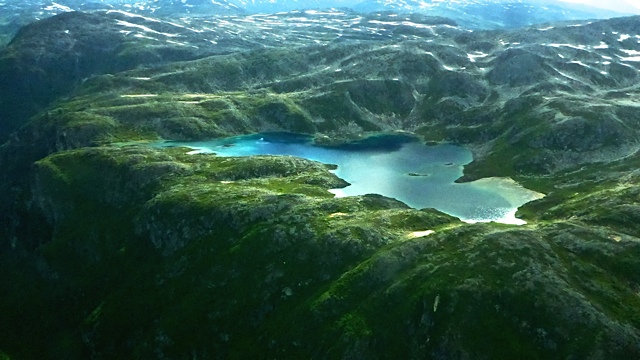 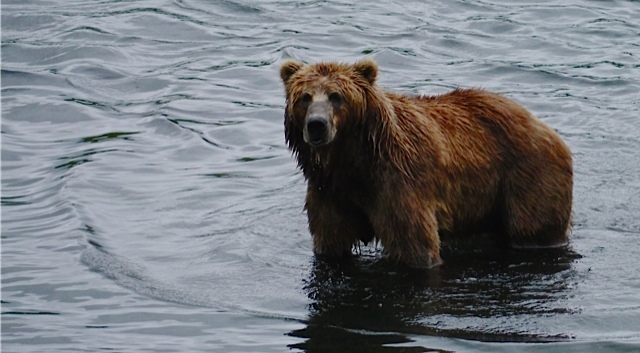 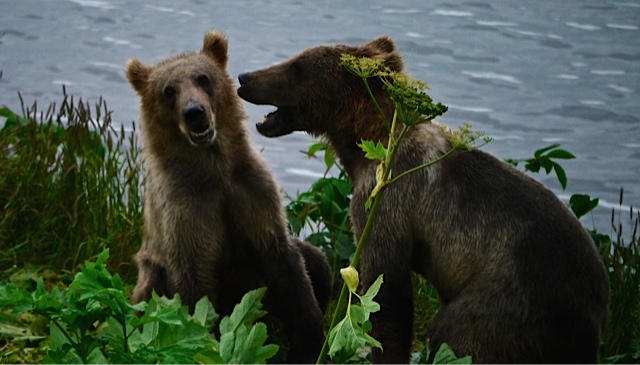 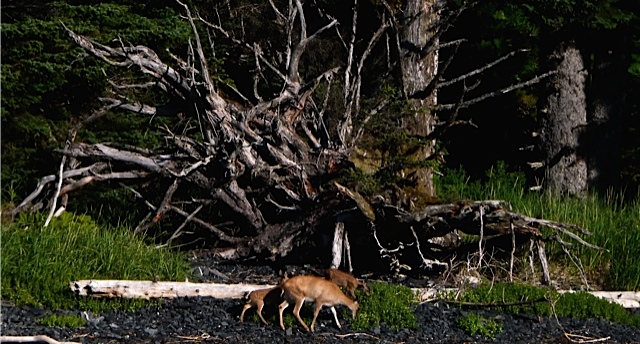 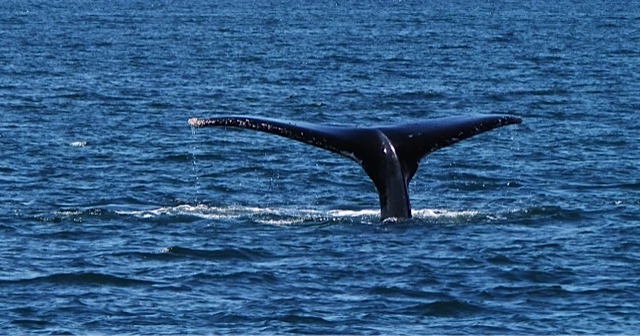 Whale of a tail 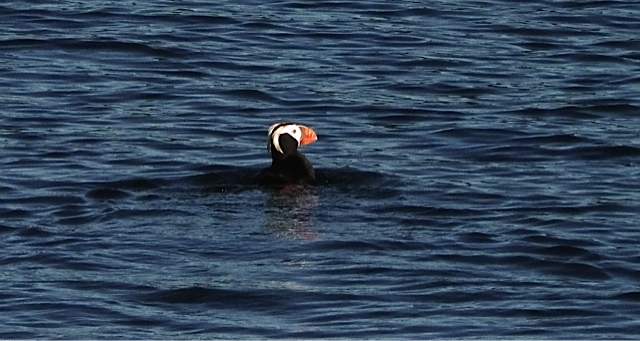 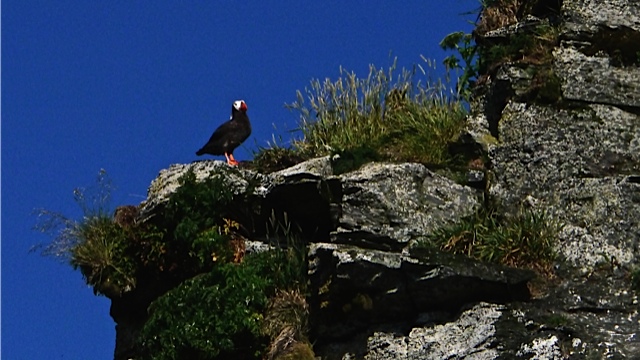 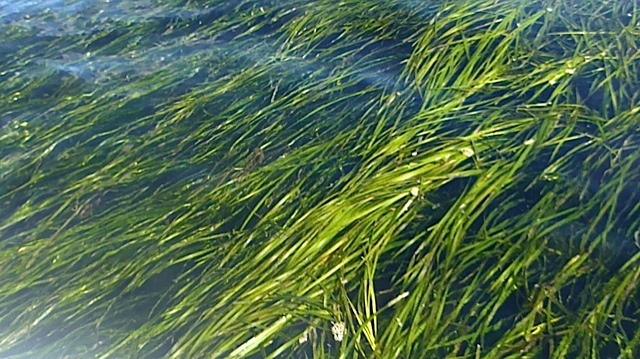 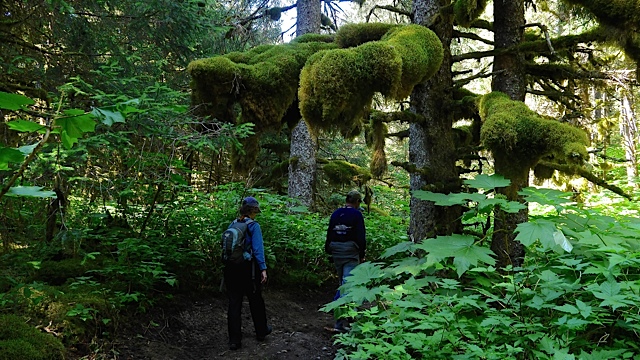 Moss on a trail to Litnik weir 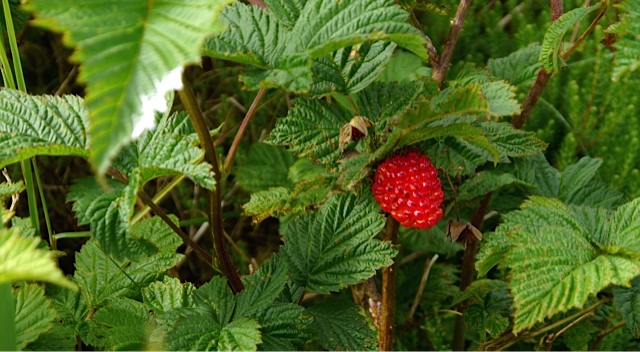 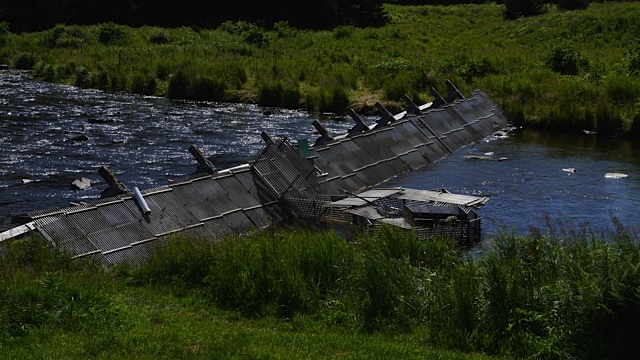 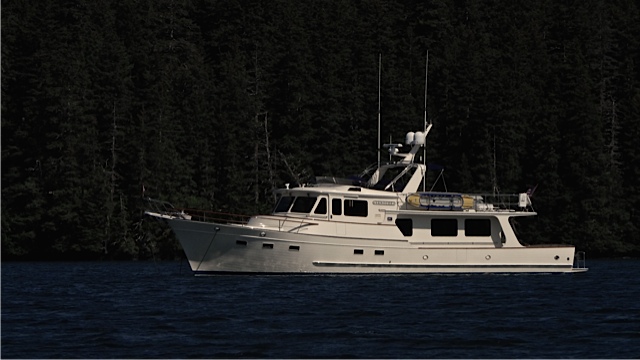 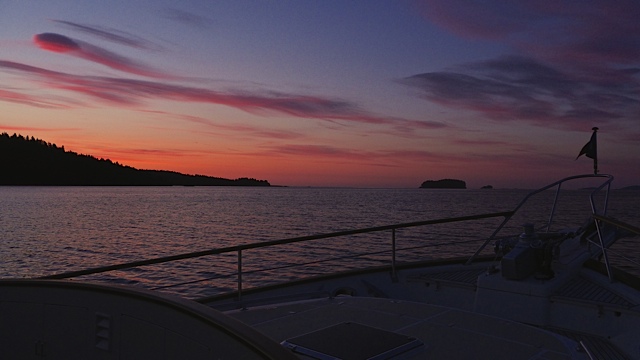 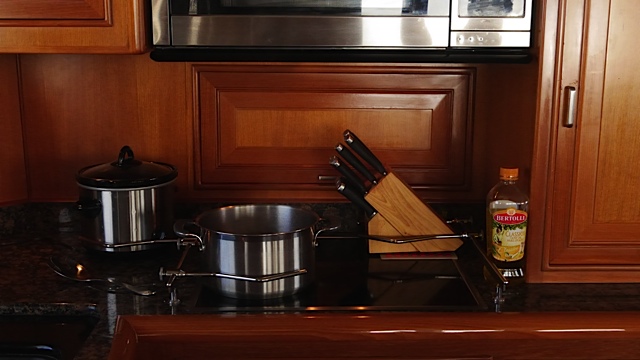 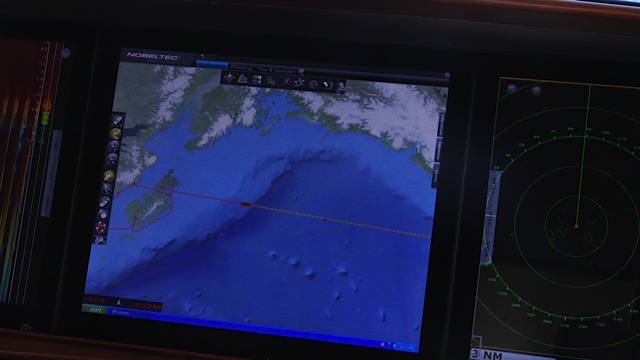 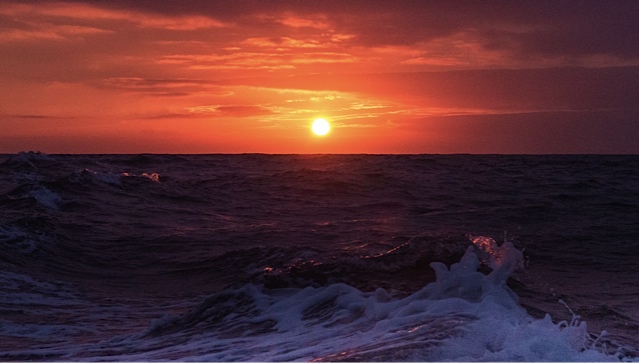 Sunset in the Gulf of Alaska 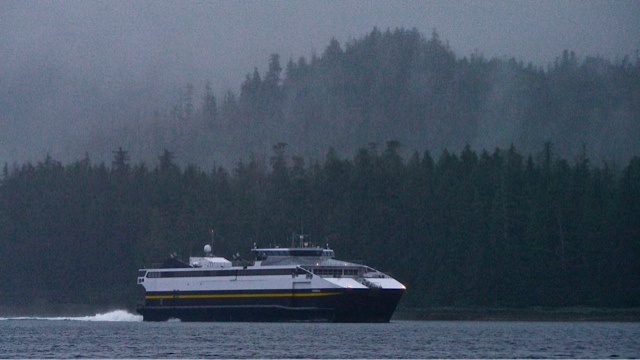 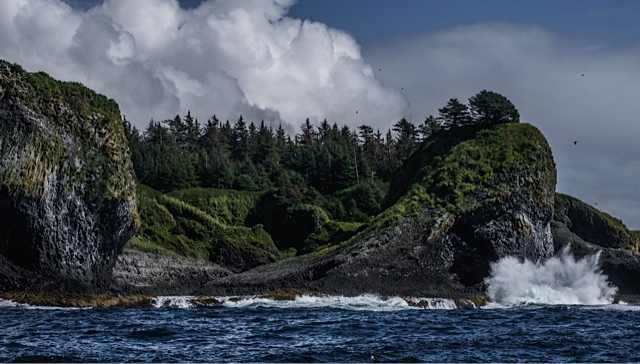 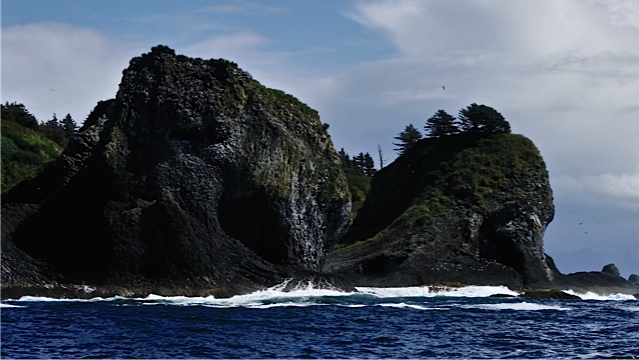 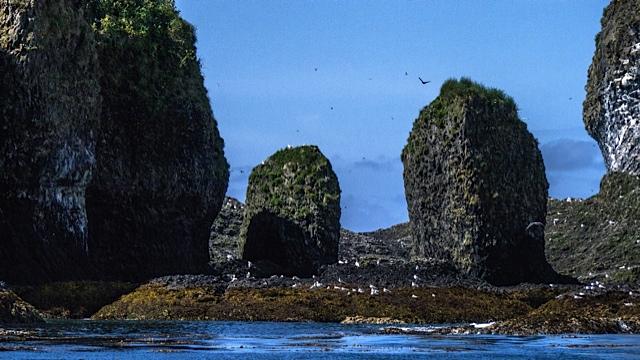 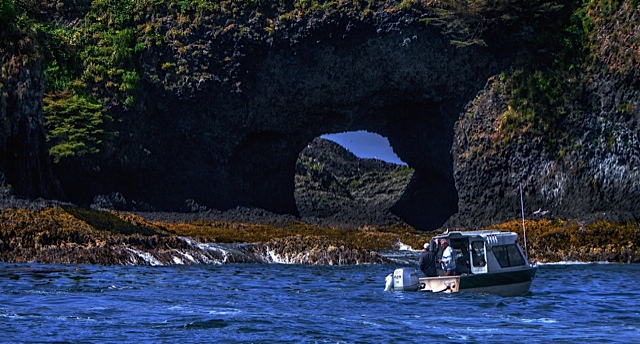 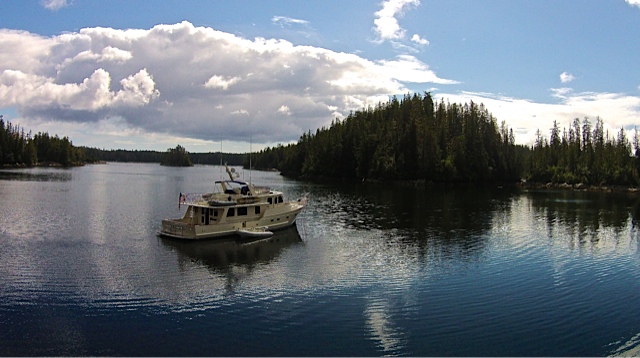 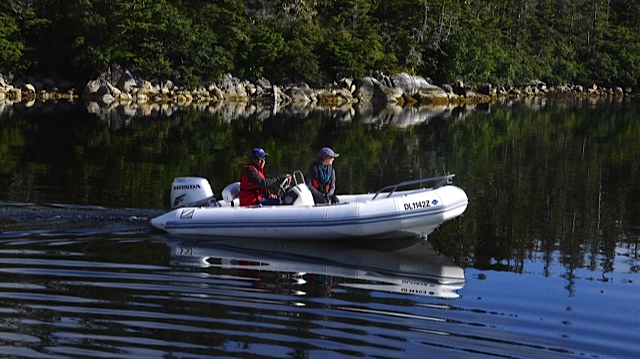 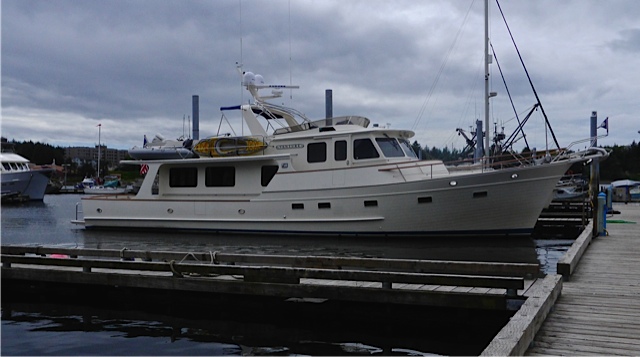 It is as well that I did not make any firm forecasts in my last blog because events did not work out quite the way we had planned. As an alternative Plan B to having the windlass motor repaired in Kodiak, we asked Brian at Delta Marine Services on Vancouver Island to airfreight us the motor that had been supplied under warranty to replace the one that failed the first time we tried to use the new windlass back in April. In the event this turned out to be a Very Good Idea because the problem with the current failure turned out to be terminal - and not just the (negative) terminal as we had hoped. It's always good to have at least a Plan B - if not C and D.

It looked as though the new motor was not going to arrive before the weekend which would keep us in town until Tuesday but fortunately it just squeaks through on Friday afternoon and Chris has it installed shortly thereafter.

While in Kodiak I meet up again with the guys aboard Let's Go and also the owner of the Nordhavn 46 Samba. Another sailboat Tamara arrived and I learn that she has been down the Antarctic Peninsula as far as the Antarctic Circle. The owner of this boat told me that the water in Bristol Bay this year was 10 degrees F higher than normal. Several passersby come to talk to us about Venture. In contrast to our last visit, many slips are vacant as most commercial boats are away fishing.

The highlight of our visit this time is a flight to Frazer Lake to watch bears fishing for salmon. We are kitted out with thigh-length waders before being flown, in a Cessna floatplane, back to where we have just come from at the south end of Kodiak Island. Our route takes us over Three Saints Bay and Old Harbor village where we can see a beautiful blue Russian Orthodox church. We fly over Moser Bay and spot the abandoned cannery where we were anchored when the windlass failure forced us to change our plans and run nonstop to Kodiak. We pass over the narrows leading into Olga Bay and then to Frazer Lake where we land and taxi up to the shore. We disembark onto the floats and wade ashore through water about 12" deep. From here we hike a muddy track, roughly following the course of the Dog Salmon River, until we arrive at the Frazer weir and fish pass. In 1951, sockeye salmon were introduced into the lake by planting eggs but the falls, where the lake met the Dog Salmon River, proved too high for the salmon to negotiate. So, between 1956 and 1961, individual fish were back-packed past the falls. They were taken one at a time so they would not run out of oxygen on the journey! A fish ladder to bypass the falls was constructed in 1962. Here, fish making their way into the lake are monitored and counted. Close to half a million salmon from Frazer Lake contribute to the overall harvests in this area.

We stay for 1 ½ hours watching two mother bears - each with two cubs - and also one rather tatty looking male bear which the other bears treated with respect bordering on fear. We fly back along the west coast of Kodiak Island and pass over Larsen Bay which we can see is very large and well developed. We had planned to go here before our plans were changed by the windlass problem. On the starboard side of the aircraft we pass high mountains with glaciers while to port we see many deep inlets which we had been warned are subject to violent williwaws.

We leave the slip at 0752 and proceed directly to the fuel dock where we take on 1285 gallons. From here we proceed to Afognic Island where we anchor in Saposa Bay. We are greeted by a very vocal otter who objects to our presence. After he - or she - has been silenced by another otter, we enjoy a beautiful peaceful evening. I photograph a doe and two fawns browsing along the shore beside the stump of an uprooted tree.

Underway at 0847, we stop at an unnamed collection of rocks at the western entrance to Saposa Bay and photograph some of the many puffins zipping past and nesting above the crags. We see several whales along the way but too far away to photograph. We meet Capella 3 on a reciprocal course and converse on the radio before taking photos of each other's boats which we will exchange by e-mail at the next opportunity. We anchor in Afognak Bay just after noon and take the big tender up the Afognak river which is shallow with ribbons of green weed streaming in the current. We go ashore and walk some distance up a trail to the Litnik Weir. We are back in the land of trees - many of which are heavily draped in moss, backlit by the sun filtering through the branches. The trail is bordered by bushes laden with scarlet salmon berries. At Litnik weir we meet Jen (Jennifer) who, with her partner Jamie, are spending the summer months counting and monitoring the salmon passing though the weir. We see a number of sockeye salmon waiting to pass through the monitoring gate.

Today is the day for us to tackle the infamous Gulf of Alaska and take the direct route to SE Alaska. The distance is around 560 nm (around 650 road miles) which we estimate will take around 60 hours - or 2.5 days. Chris has been diligently checking the weather and a decent weather window is forecast. We up anchor at 0503 and, under a lovely dawn, are underway for the Sitka area. We run watches two hours on and six hours off. With the wind and waves from aft, Venture - with her long deep keel - provides a comfortable ride even though the wind is 15 to 20 knots and the swells quite large. We plough a lonely furrow across the restless, heaving ocean with speeds dropping as low as 6.3 knots on the backsides of the swells but reaching as high as 14 knots when surfing down the front. Initially we are accompanied by a variety of bird life - including frantically flapping puffins surprisingly far from land and the occasional Laysan albatross who seldom go to land at all. We also encounter whales and Dall porpoise but all this wildlife is left in our wake once we leave behind the continental shelf and see water depths of 7,000 feet.

This morning we see a tanker, six miles off, on her way from Valdez to Port Angeles. This turns out to be the only vessel we encounter during the entire crossing. I prepare a couple of meals which gives me the opportunity to expound on the importance of having pot holders when cooking underway. Those on Venture (and every Fleming) are especially versatile and I have included a photo showing them holding a crockpot - off the cooktop surface - along with a regular pot, knife block retainer and even, although I admit this was serendipity, a place to hold the olive oil.

Mid morning we reach our halfway point (aka the point of no return). Our maximum distance from land is about 125 miles - but not the kind of land you would voluntarily choose to put ashore. Around 3 pm the first serious piece of continental land, Yakutat, is 140 miles distant. At 1020 pm we are treated to brief but vivid sunset. Due to our easterly progress, this is already one hour in advance of sunset on Kodiak Island.

Overnight the sea and swells calm right down and, for the first time in many hours, the grey outline of land breaks the ruler-straight horizon. At 11am we enter Salisbury Sound thus completing the uneventful (thankfully) crossing of the Gulf. We anchor in Sukoi Inlet, between Shikof and Kruzof Islands. At 1237 we shut down the engines after 55 hours and 34 minutes during which we have covered 559 nm - giving us an average speed of just over 10 kts. Surprisingly we have one bar on our AT&T phones, making it possible to confirm our arrival to family and friends - although our progress is also being announced in real time through the link on our website.

We are back in SE Alaska! It is a grey rainy morning and we are surrounded by trees. In reduced visibility, we travel down Neva Strait and through Whitestone Narrows just ahead of high speed ferry "Chenega " which runs as fast as 36 knots between Juneau and Sitka. We negotiate the narrow, kelp-strewn entrance to De Groff Bay on Krestof Island and drop anchor at 1155.

Contrary to all expectations - including those promulgated by the weather forecast - we awake to a stunningly beautiful sunny morning. Once underway at 0843 we glide through water so calm it mirrors the surrounding forest. Mount Edgecombe - an extinct volcano which last erupted around 2200 BC - is completely clear of snow. In fact there is almost no snow on any of the surrounding mountains in contrast to when we were last here at the same time of year in 2012. Taking advantage of the calm conditions we head offshore to the St Lazario Islands which have strange and rugged topography with pillars of rock. One has a large hole punched right through it. Heavy swells are breaking on the rocky shore. These isolated islands are home to numerous species of birds but most are nocturnal so those we see are mainly gulls. From here we move to an un-named bay on the south side of Magoun Island where we fly the drone and take video and stills of Venture in the peaceful anchorage. Our solitude is disturbed when we are joined by two local boats. We are not used to sharing our anchorage with others but this is something we will need to get used to at this time of year now that we are cruising through more populated areas. We take the large tender through a narrow, rock-strewn channel and cruise the convoluted shoreline among the islands.

Another beautiful morning. Steve and Christine go off for another tender ride before we set off for the town of Sitka. We arrive at noon to see another Fleming 65 tied up in Eliason Harbour. We will be here for about five days during which time Steve will leave us and we will be joined by Louisa from Taiwan.