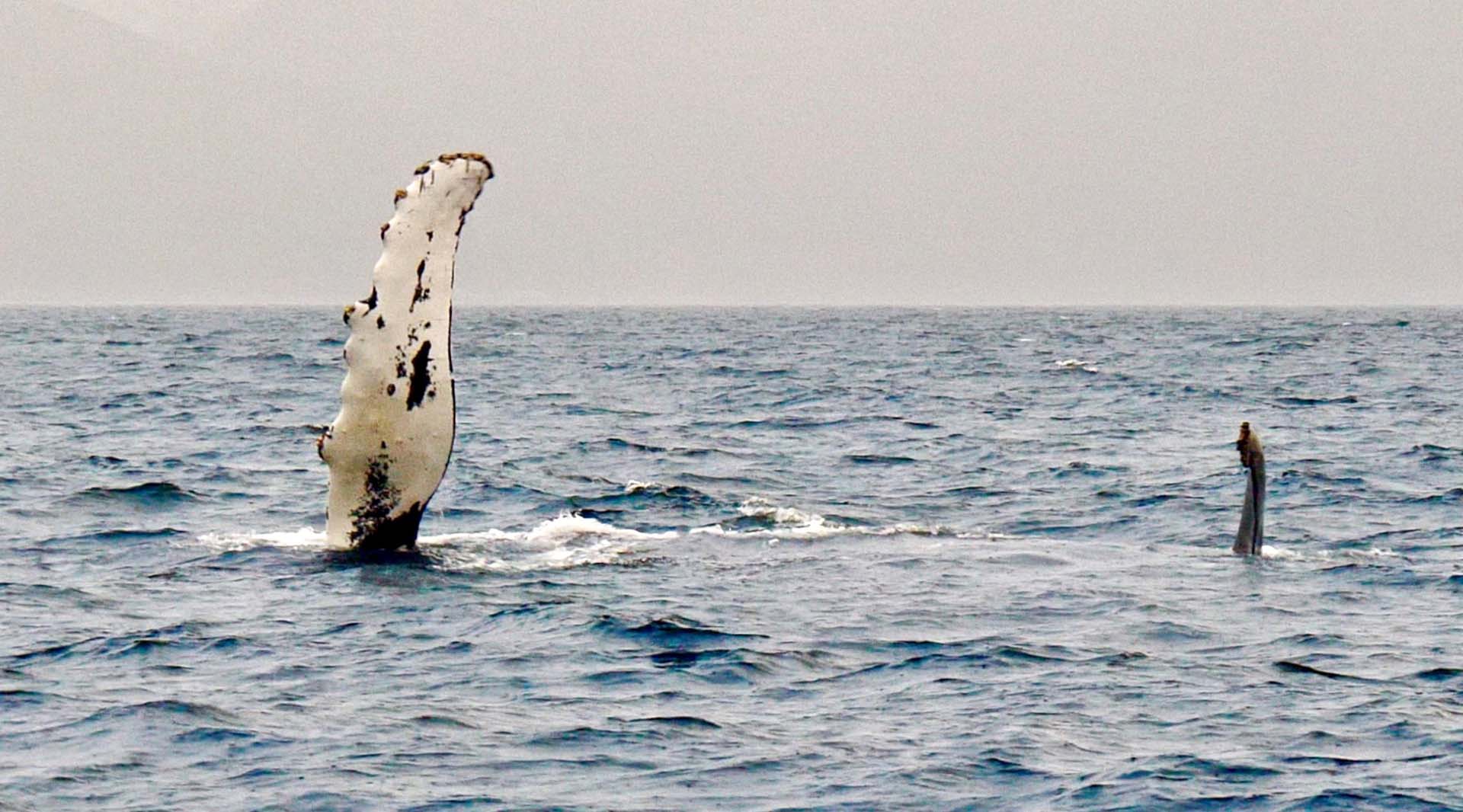 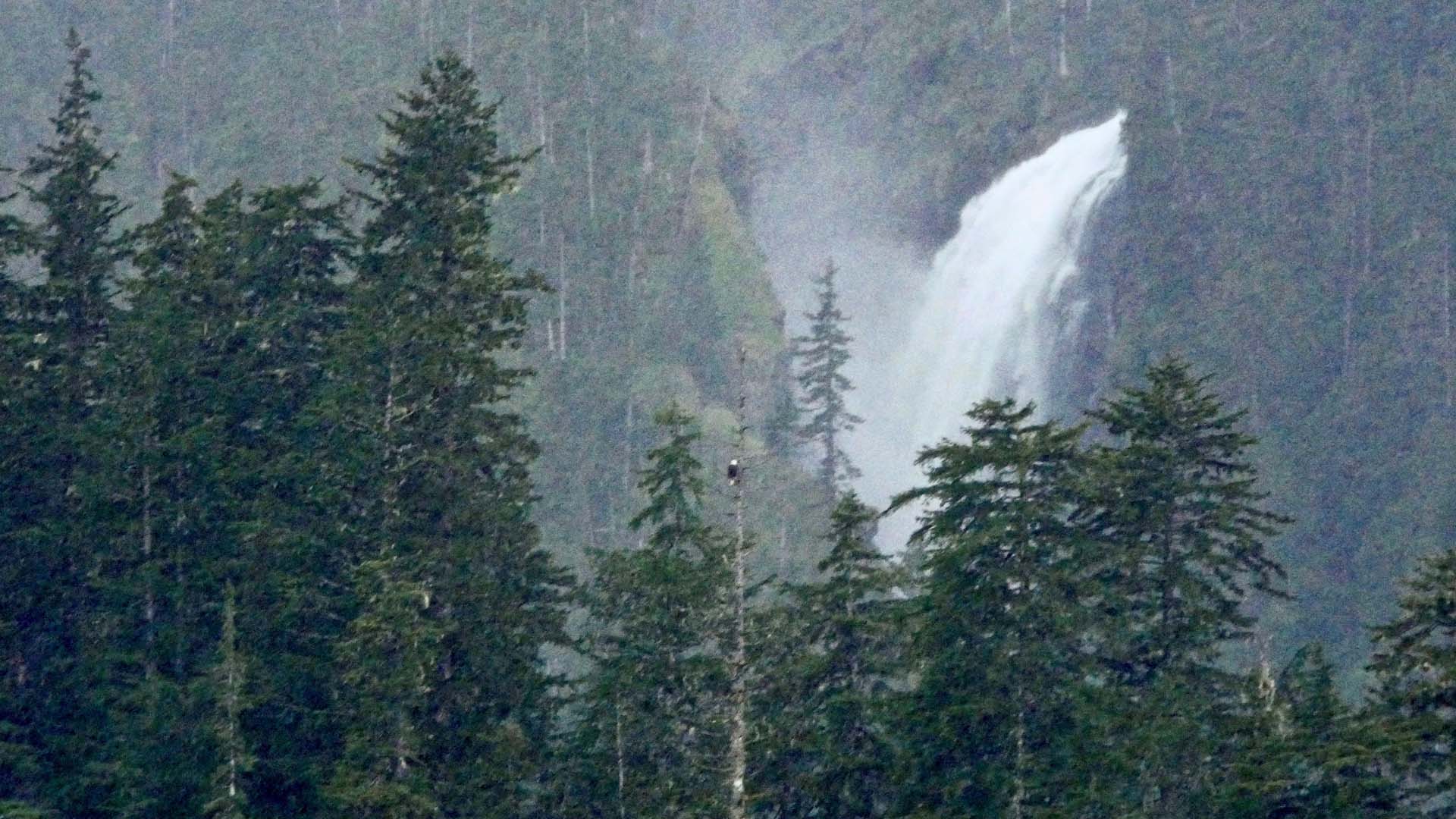 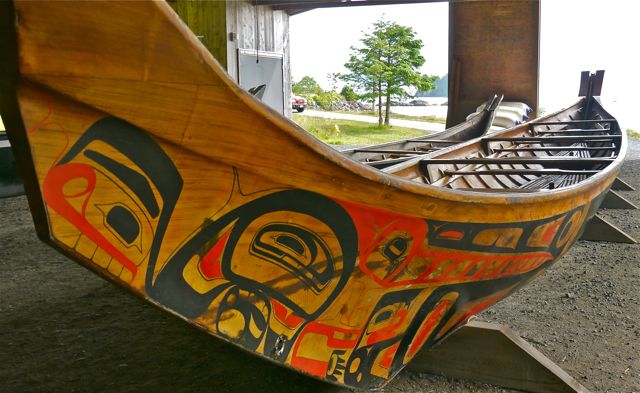 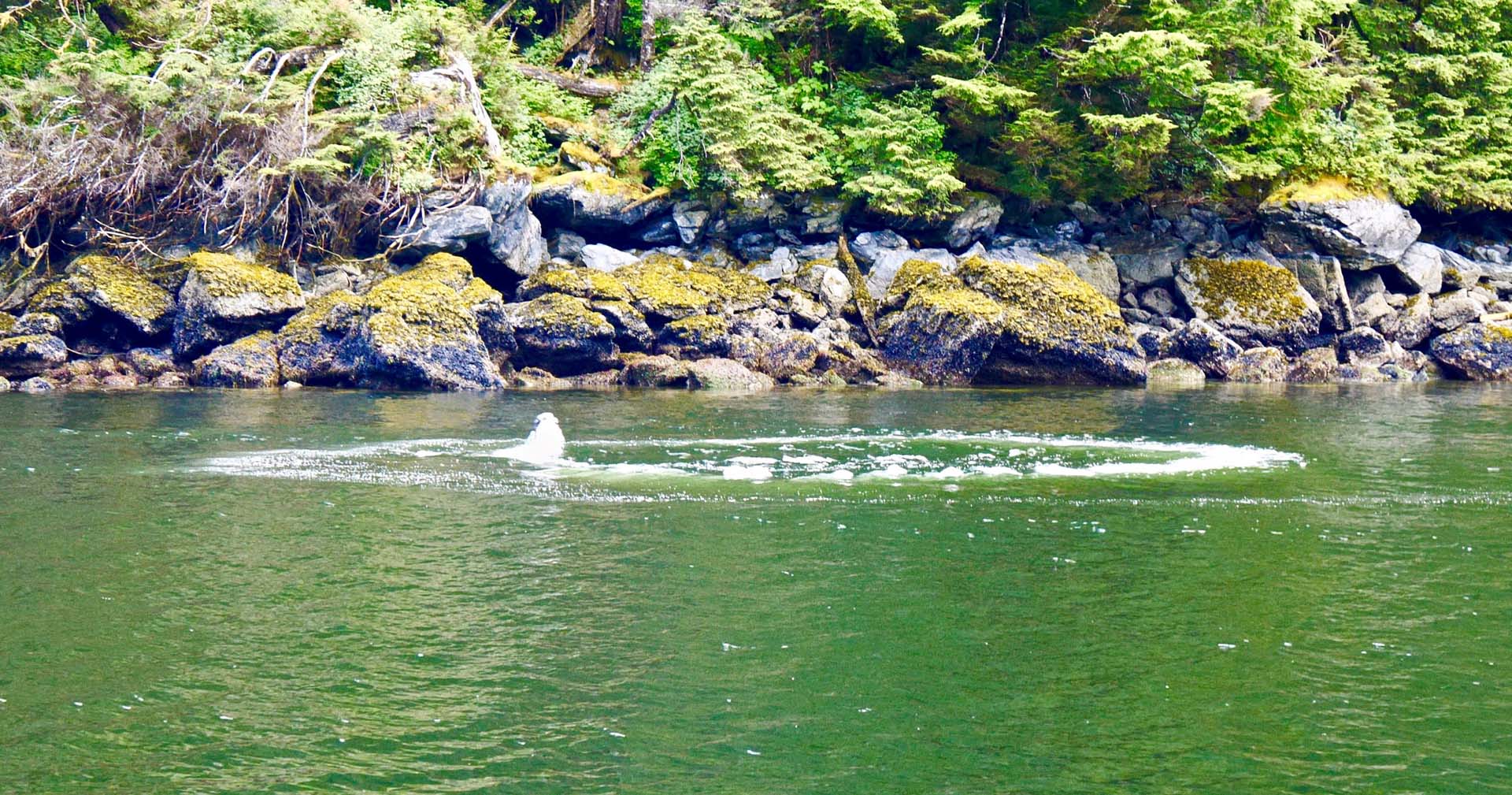 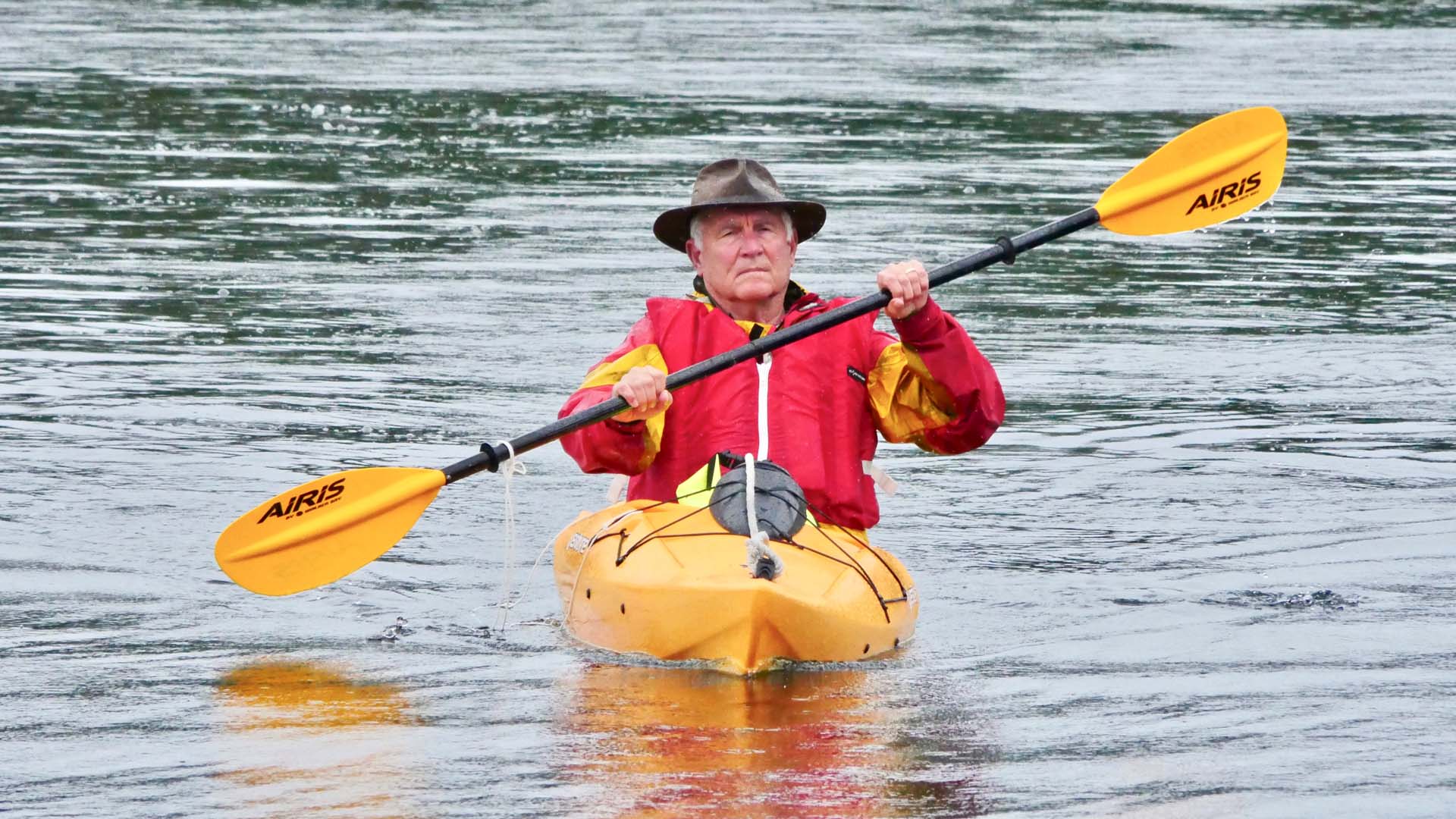 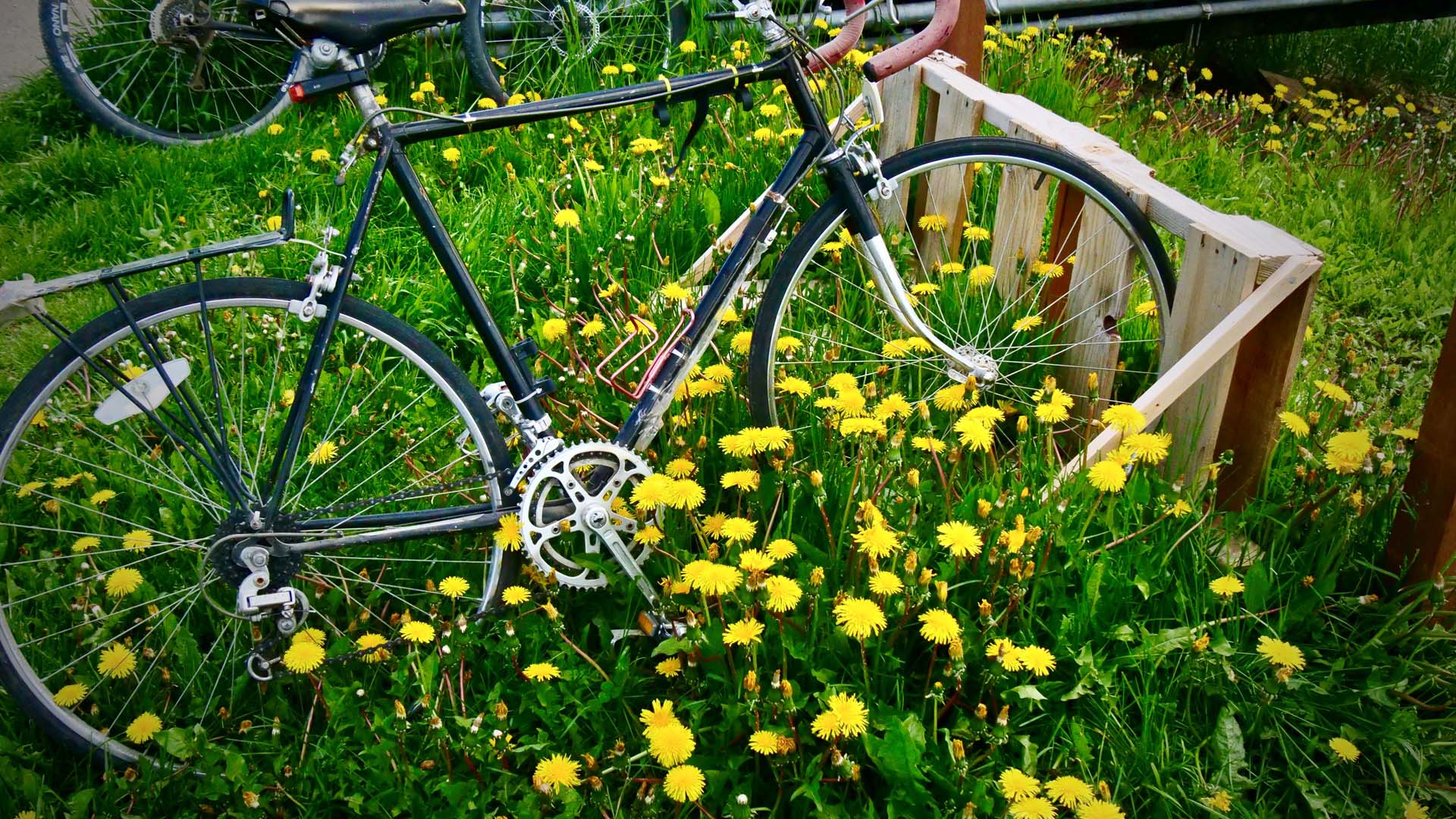 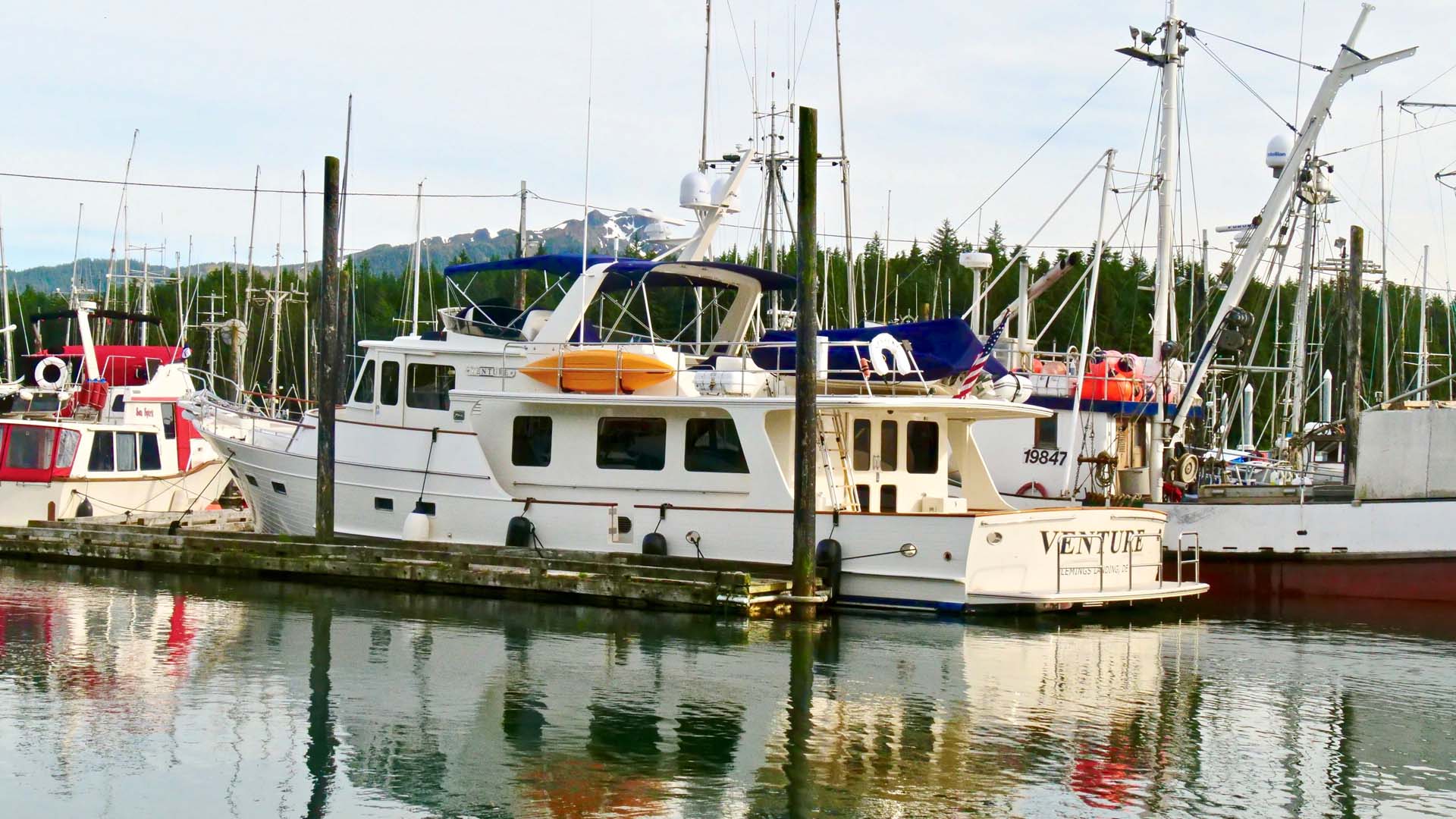 With our stomachs comfortably stuffed with delicious cinammon rolls - provided by the post mistress and consumed in Dan and Carol’s delightful home that started life as the old school house, we are underway from Meyers Chuck at 0948. We encounter Sams’s small fleet approaching the harbour entrance together with a sailboat we had seen yesterday. Meyer’s Chuck dock will be full this evening!

The wind is 15 - 20 knots from aft which makes for a comfortable ride. We drop the hook under rainy conditions in Exchange Cove at 1357. Two other boats are already at anchor.

May 29th Tuesday
Underway at 0804. The weather improves and slides into a lovely day. We enter the southern end of Wrangell Narrows — a twenty mile winding channel with 62 red and green navigation buoys and beacons range markers.

The tide enters the channel at both ends. The opposing currents are strong and meet in the middle. They are with us at the start but against us at the end. At its northern end, lies the town of Petersburg where we do not stop but pause to take advantage of cell phone coverage. This allows me to transmit blog #3.

It is here, at Petersburg, I am always struck with the feeling we have finally reached the real Alaska. The horizon is lined with snow capped mountains but, even this early in the year, there is significantly less snow than we have previously seen in July. In the distance we spot floating chunks of ice shed from the Le Conte glacier.

We continue up Frederick Sound and enter Portage Bay at 1532. A Nordhavn and a traditional Grand Banks are already there when we anchor. Showers and lowering clouds paint a dramatic landscape over the mountains which later morph into a dramatic sunset.

May 30th Wednesday
We awake to a beautiful morning. A pair of common loons drift closer in the morning light. Underway at 0805 we continue up Frederik Sound to Five Fingers Islands where Doc spots a whale breaching. We follow the humpback for a while and are able to film some tail and fin slapping but no more breaching.

Over the next couple of hours we follow up to four whales but none wanted to show off. We move to the Brothers Islands across the Strait before returning to the Five Fingers without any more sightings. Finally at 3 pm we head to Snug Bay but the GB we saw last night beat us to it so we anchor at 1615 in an adjacent, un-named, bay. Cruising in these waters, even one other boat makes an anchorage seem crowded!

May 31st Thursday
Another beautiful, sunny, morning. Underway at 0759 to return to Five Fingers islands. We stooge around for about one hour but see nothing so continue west down Frederick Sound. We anchor at 1408 in a protected anchorage of Chapin Bay.

June 1st Friday
Underway at 0832 we continue to travel southwest down Frederick Sound. The morning starts sunny but clouds over and starts to rain. The snowy mountains of Baranof Island are now ahead of us with considerable snow but mostly hidden in the mist. A humpback whale suddenly appears nearby and indulges in fin slapping. We stay with him for several minutes and I shoot some reasonable video.

We enter Chatham Strait at Point Gardner and cross to the eastern shore of Baranof Island. Cascade bay gives its name to a large waterfall mostly hidden in the trees.

We move south to Little Port Walter and, at 1435, anchor in the inner bay just across a NOAA fish research center with several buildings. We anchor just ahead of a fisheries research vessel called Medeia. Continuous rain all day.

June 2nd Saturday
0850 Still raining. Research vessel leaves early. We have an eventful day. We start by traveling a short distance south and poking our bows into tiny Toledo harbour 0905 before motoring back north into scenic Deep Cove with a thundering waterfall at its head and countless ribbon-like falls tumbling down from the heights.

The entrance to adjacent Patterson Bay appears mysterious between mist shrouded mountains. We proceed right to the head of the fjord 1230 where there is a patch of snow right down to the water.

As we retrace our steps through the narrowest part of the fjord on the way out we come across a solo humpback whale bubble net feeding. He is close by and the conditions ideal with jade green water showing the bubbles and rich shoreside foliage for a background. Over and over he creates perfect circles with bubbles and then lunges across them on his side with mouth agape. I got some good video.

We move on to Gut Bay 1400 where a French lady was frozen in for the winter. Described here in an excerpt taken from the invaluable guide book “Exploring Southeast Alaska” by Don Douglas & Reanne Hemingway-Douglass.

“Mickie discovered a little fjord on Baranof Island’s east side— Gut Bay — well sheltered and its waters fed by fresh water streams, cold enough to ice over. In September 1995, she and her companion, Thomas, sailed to Juneau to prepare Nuage for a long winter's night.

Everyday in Gut Bay brought new fears - williwaws gusted to more than 80 miles an hour; avalanches roared down the mountains above the bay; ice cracked and groaned against the hull; the deck iced over.

But every day brought new delights, as well — the irridescent colors of the high latitude winter sky; the pristine snow; the river otters that played on the ice near the boat. Mickey and Thomas reveled in their sanctuary. They maintained the boat; they read; they wrote; They chopped wood from the mountainsides; they watched the wildlife — deer, ptarmigans, mink, bald eagles. The days sped by; they felt privileged to be part of this wilderness.”

After this we check out Hoggatt Bay 1510 which is not as scenic as the others - but we have been spoilt!

Finally, at 1657, we pass through the hidden entrance into Red Bluff 1657 which we have visited twice in the past. When we reach the head of the bay, we find the only good anchoring spot already occupied by two traditional GB’s plus an aluminum fish boat all rafted together in the very limited anchor site. We take second best in 60ft of water. It works out OK. Doc spots a large brown bear on the grass flats a long way off.

June 3rd Sunday
Underway at 0840 while the other boats still at anchor. Spitting rain. We pull into the dock at Warm Springs at 1104. The large waterfall at the head of this bay is really thundering and creating quite a current. Shortly after we arrive a small 22 ft called Hunky Dory pulls in. The couple on board turn out to be great admirers of the Fleming brand as well as my videos! They trailer their boat to different areas and over the years have done amazing trips including two on the Yukon river. Soon we are joined by a GB 42 Europa called Easy Spirit then a GB32 woody hull #94 named Tokeen both of which were in Red Bluff last night. This small GB is fifty years old in in good condition the present couple have owned her for 20 years and also have made some amazing journey in her. A GB 46 Classic Downtime joins the group on the dock and she is followed by a fish boat called Morning Star which rafts alongside us. She leaves at 7 pm to pass through Peril Strait on her way to Sitka. From there she will head directly to Cordova in Prince William Sound for the salmon season.

Louisa and I take advantage of the wonderful hot springs baths, Hot water runs into them continuously and you add cold water to adjust the temperature. The water has a silky feel to it and is wonderfully relaxing. We enjoy chatting with all the other boat owners and their amazing adventures. There is no doubt that one of the best features of cruising are the people you meet.

June 4th Monday
As we get underway at 0745 a brace of float planes arrive at lodge. We make our way north up Chatham Strait and round North Passage Point into Lyoukean Bay in the hope of seeing whale bubble netting. We see a small cruise ship called Safari Endeavor but, sadly, no whales. We turn into Pavlof Harbor at 1420 and spot two brown bears on the beach. Believe they are a mother with adult cub. They browse on the grassy shore and are a long way off.
We launch a kayak and Doc paddles off to take photos in the rain. A trailerable sail boat from Texas, named Two by Sea joins us in the bay.

June 5th Tuesday
Underway at 0810. Still continuing north up Chatham Strait we meet the high speed catamaran ferry from Juneau en route for Sitka traveling at 37 kts. She passes just over one mile away so too far to photograph well. We round Point Augusta into Icy Strait and arrive in Hoonah at 1205. The cruise ship Celebrity Millennium is tied up at the cruise ship dock out of town. In the harbor is the 130 ft Delta private yacht Daedalus. I believe this may be the same vessel that was here when we visited last year.

We go ashore and walk through the small town. Everwhere are masses of dandelions. Some still in cheerful yellow and many as fluffy clocks waiting for the wind to spread their seeds far and wide on their little parachutes.

I photograph a bicycle which has been parked long enough for the cheeky plants to grow through the spokes. I spot an eagle sitting up a tall tree in the same nest as last year. The boat in next slip, Morning Haze, was built in Holland and had made it through Northwest Passage last summer and wintered here. Her Hailing port is Siesby.

June 6th Wednesday
Spent day at dock. Hoping for whale action and giving me time to put together this blog.