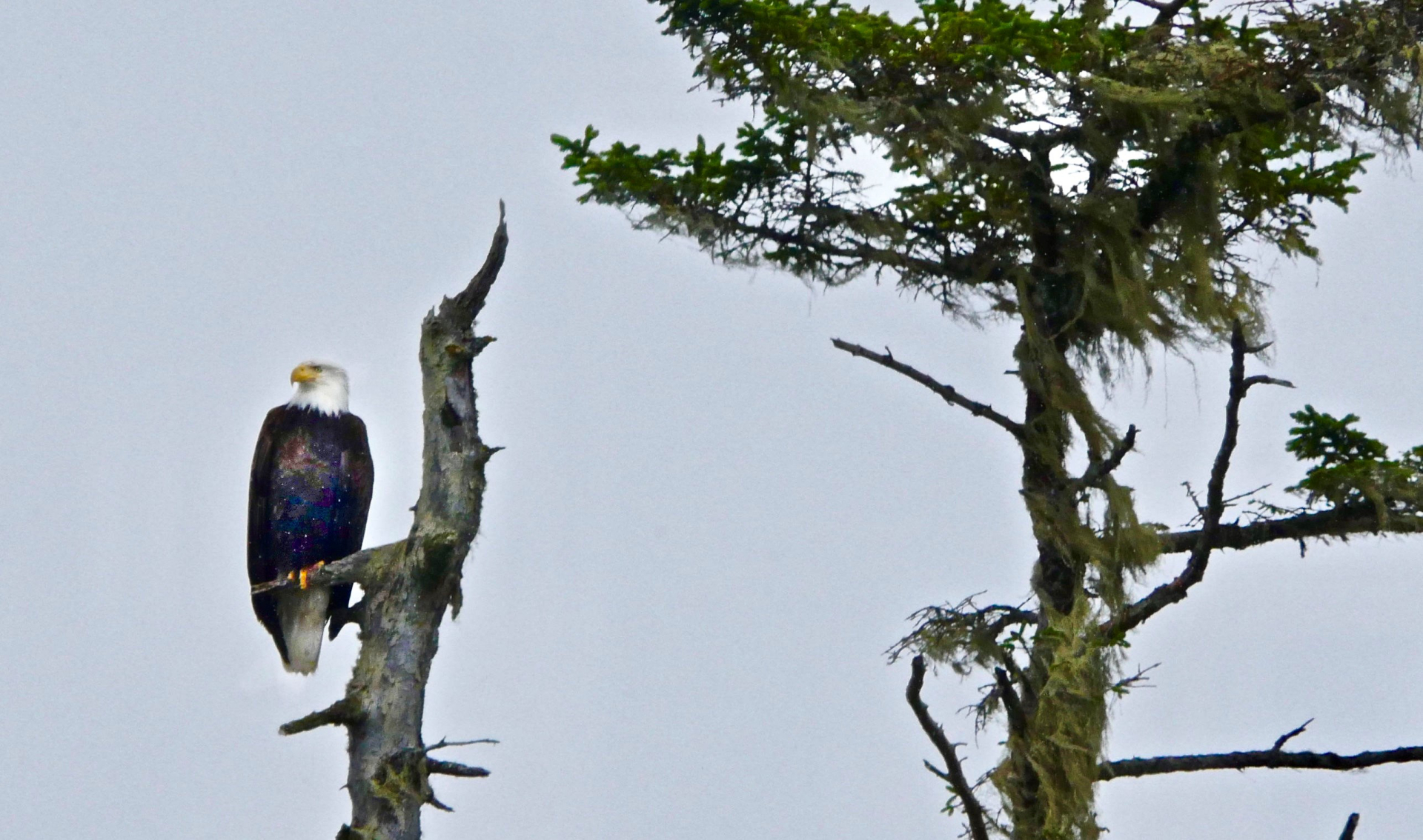 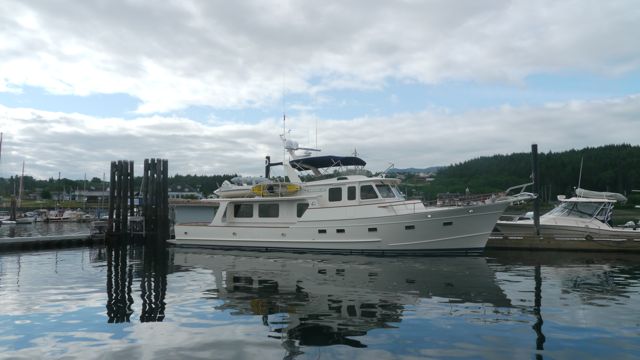 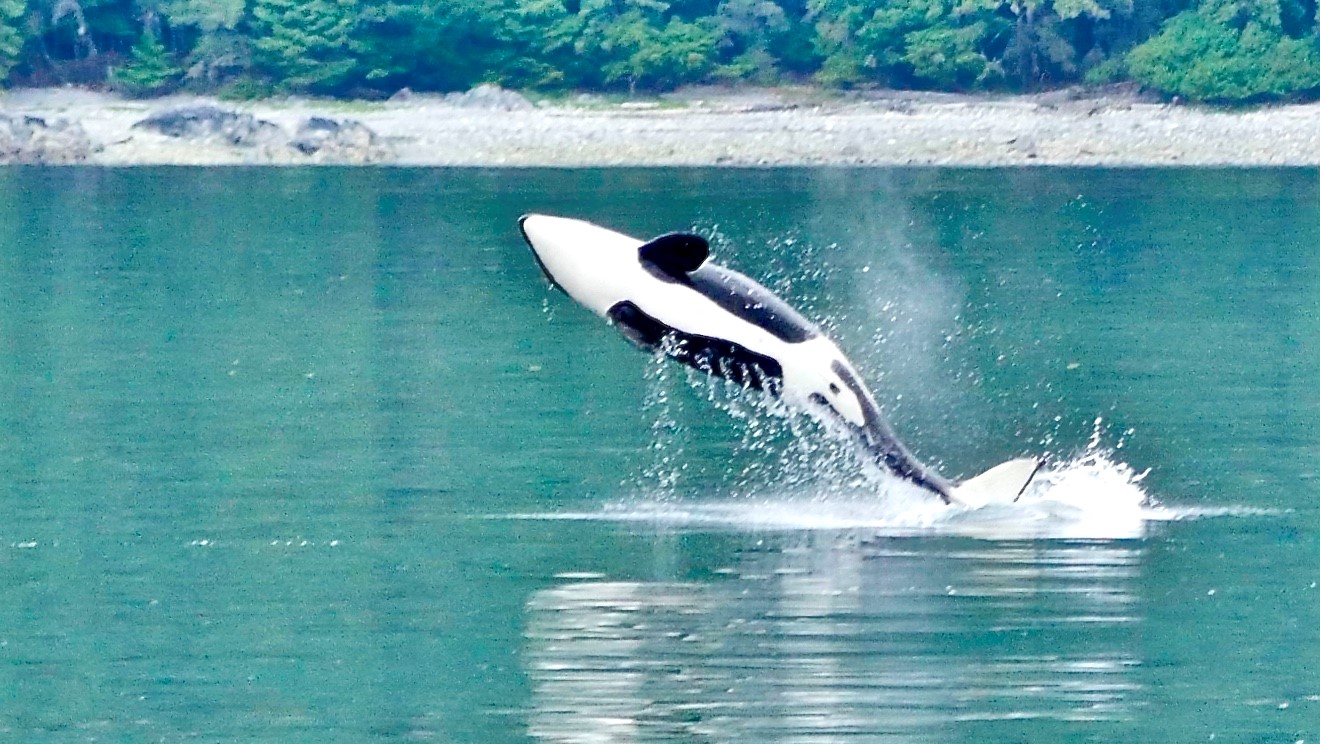 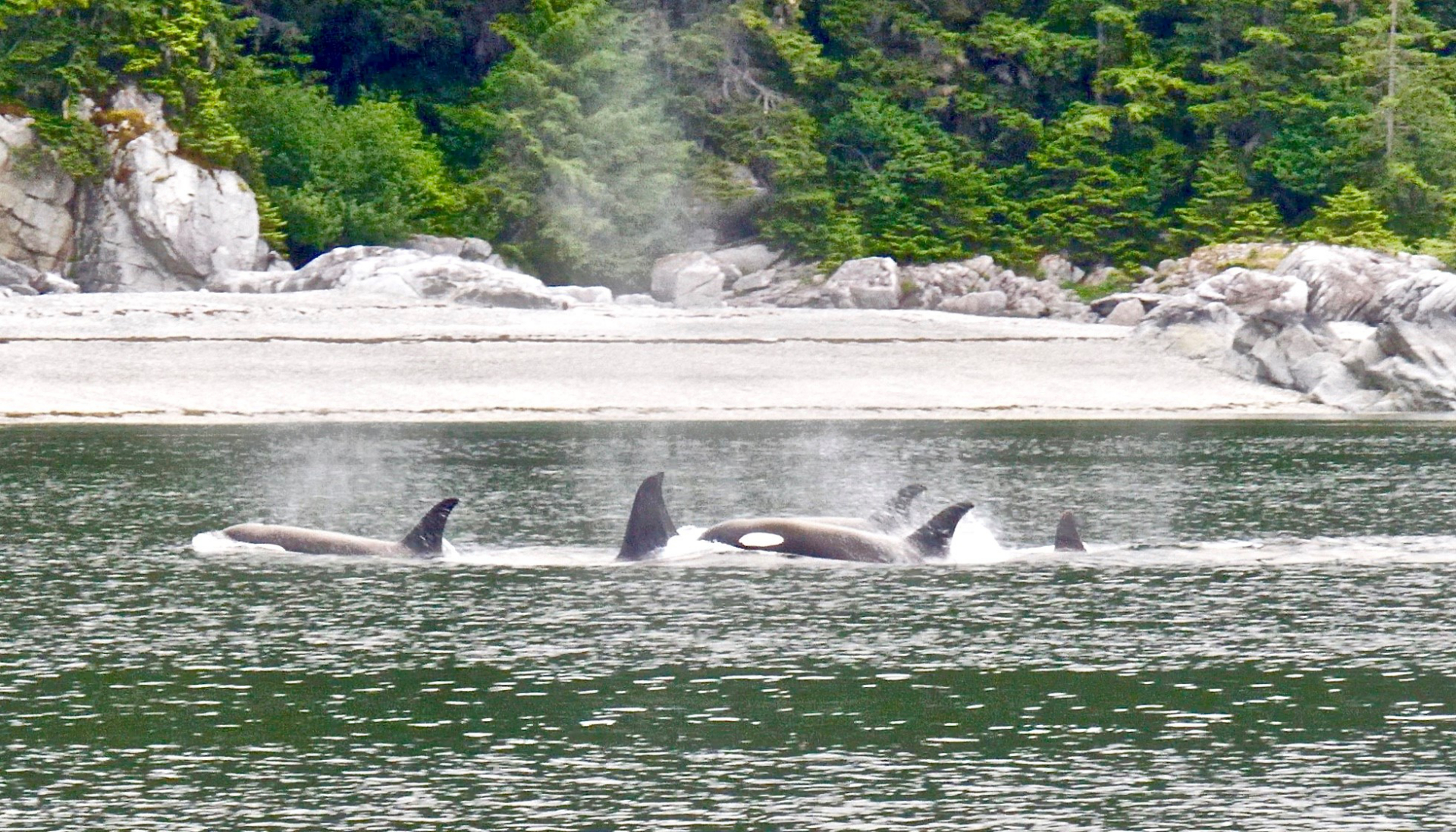 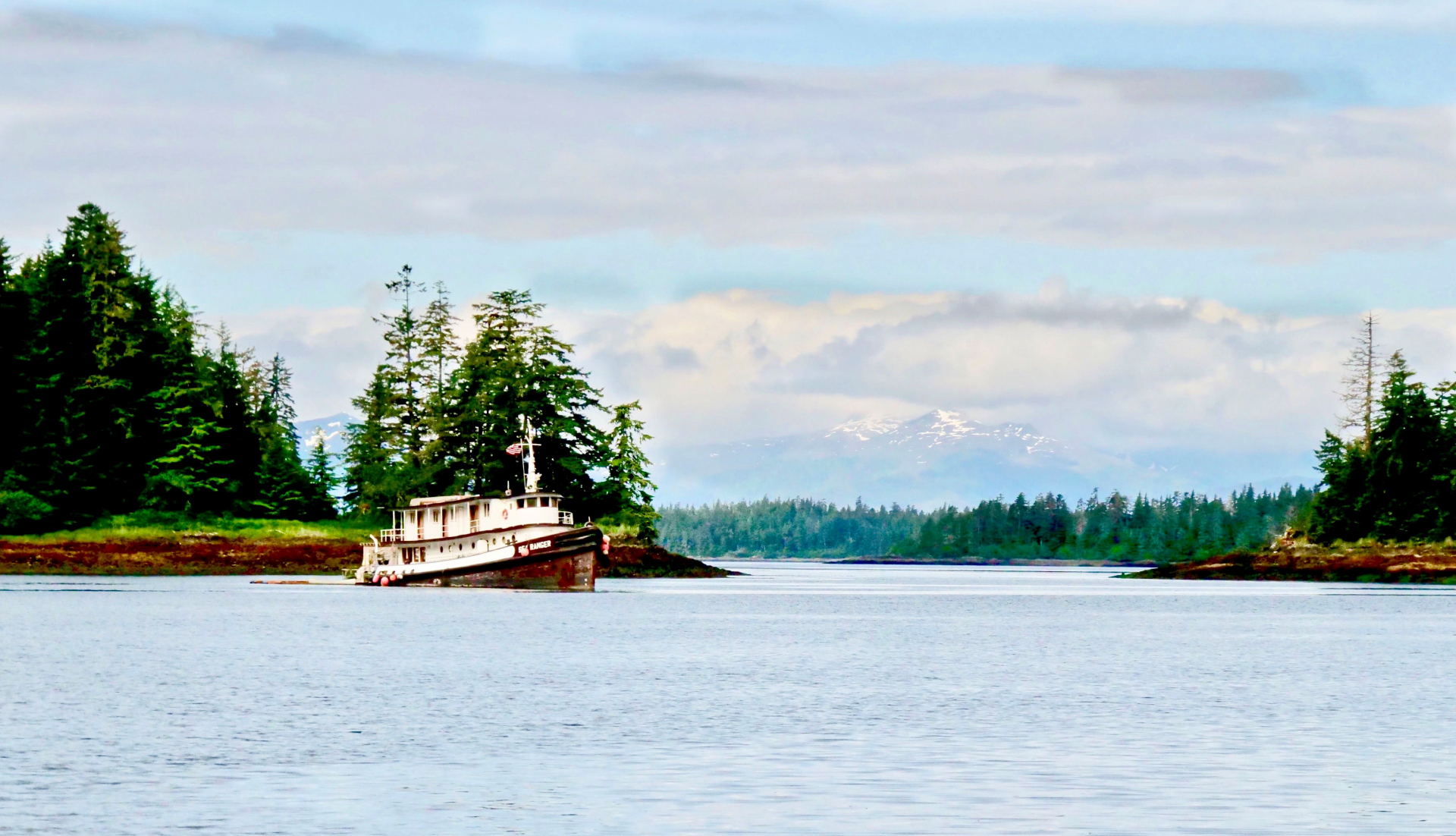 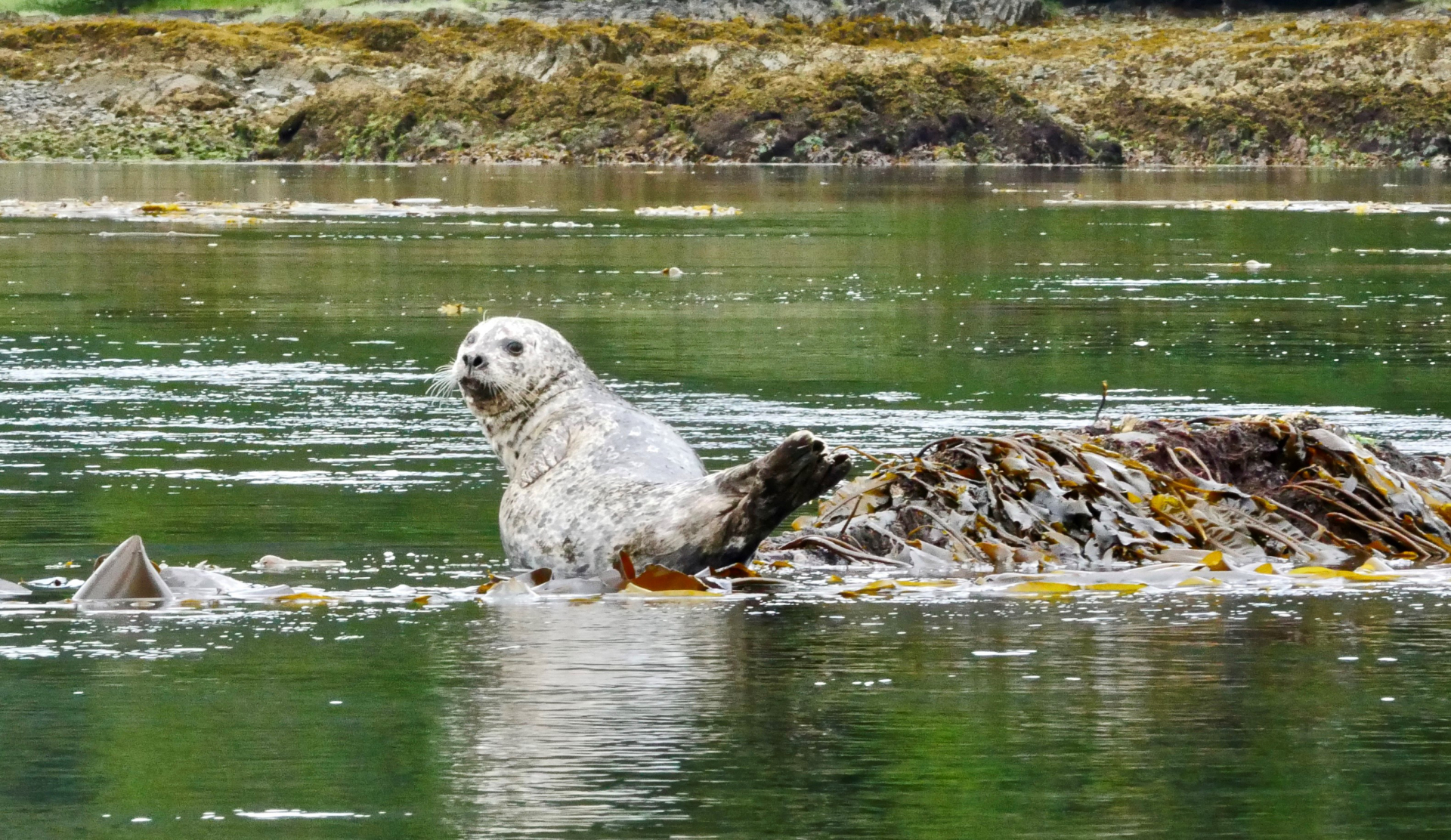 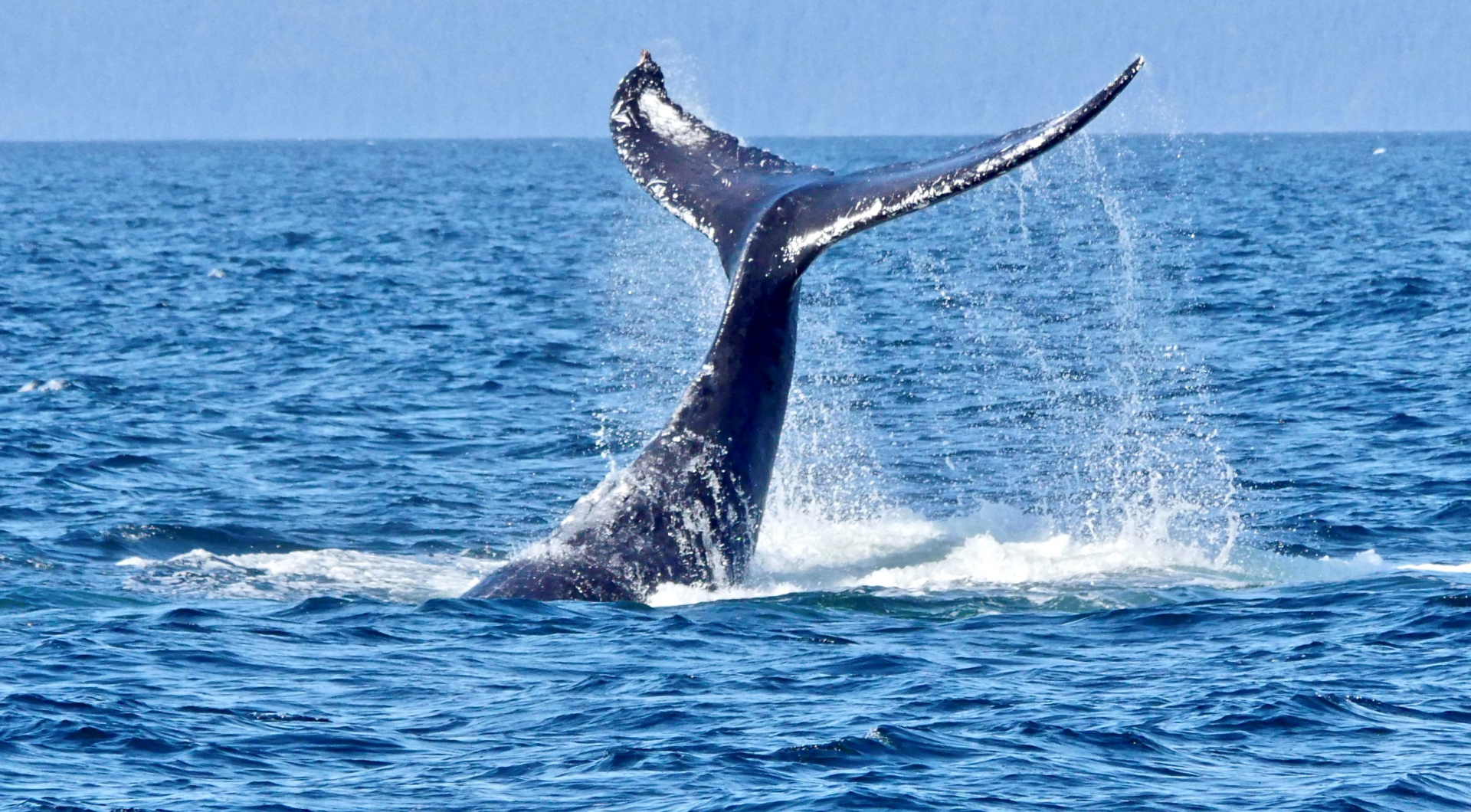 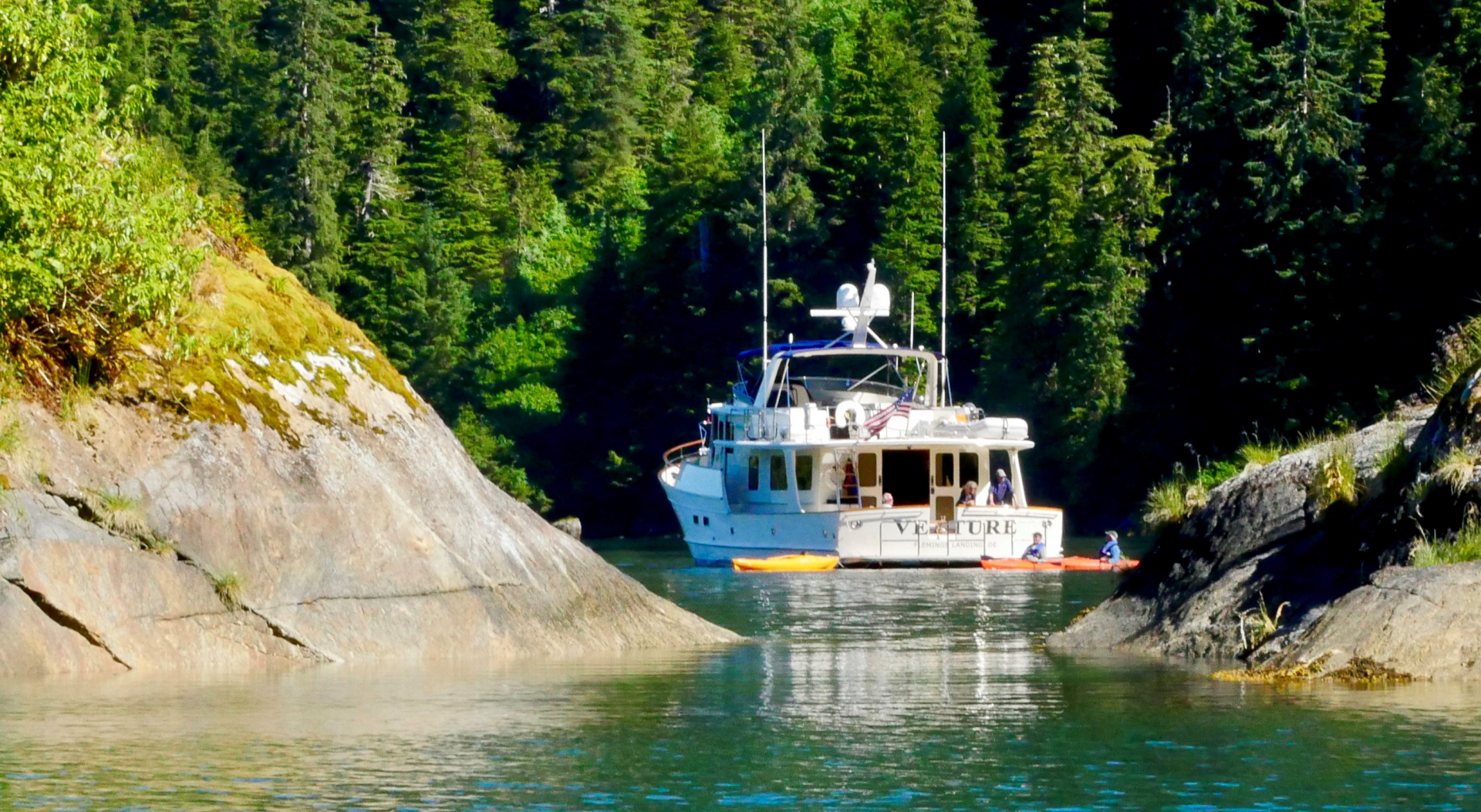 June 26th Tuesday
Another lovely day at first although rain showers come later. We are underway from Hoonah at 1026 but, before leaving, we do some minor provisioning from the surprisingly well supplied local grocery store. We drive by the Spaski and Sisters Islands on the way across Icy Strait en route to Couverden where we anchor in 74 ft of water at 1205.
Bald Eagle on Sisters Islands

June 27th Wednesday
We awake to very low tide and are able to watched eagles feeding on crabs along the beach. Up anchor at 0935, we drive south and turn into Hawk Inlet for a look see. To our surprise we see a huge mining operation. From the internet we are able to learn that this is Green’s Creek Mine which has produced quantities of silver. We do a drive by before exiting the narrow entrance where fishermen stand waist deep in the fast flowing water. A pair of eagles watch the action from a navigation marker.

We continue south down Chatham Strait and anchor in Pavlof Harbor at 1410. There is a Krogen already at anchor, later joined by a GB 36 and one other boat. We see the occasional salmon jump but there is not yet any action at the falls. An optimistic bald eagle is perched on a tree overlooking the tumbling water. Two sets of bears browse on grass on opposite shores.

June 28th Thursday
Underway at 0848 we drive towards the head of Freshwater Bay. We can see the upper reaches are infested with crab pots so we turn around before reaching the very end. We continue past the entrance to Pavlof and cross Chatham Strait. It is overcast with light rain. Just north of Angoon, we spot large numbers of orca. They are heading north so we turn around and follow them. I manage to capture one shot of a breach. We follow them north for a couple of miles before turning around and continuing our journey south. We anchor in the North Arm of Hood Bay at 1533.

June 29th Friday
Underway at 0842 under light rain. We spot a brown bear way off in the distance at the head of the bay. Also three good sized deer walking along the beach. I am struck by the anomaly that such a large and powerful predator as the brown bear prefers grazing on grass and then, when available, salmon. Our progress down Chatham Strait under rainy skies with the tide against us occupies the entire day. Baranof Island to starboard lies hidden behind a thick curtain of mist. We pass the entrance to Steven’s Passage leading to Petersburg and head into the Bay of Pillars where we anchor at 1627. We are surprised to see a large converted tug called Sea Ranger anchored in the very spot we have in mind. According to the guide book, this tug is actually a “resort” in its own right.

June 30th Saturday
Today, the weather is completely different. There is no rain and bright sunshine breaks through puffy clouds. Initially it is mirror calm but soon a chilly breeze popples the still water. We launch the large tender and Doc takes photos of otters from the drone. I later try from the tender but these skittish creatures show unease when I am still far away so I back off.

This bay has an inner sanctum only accessible via a narrow and tricky channel. For which the description in the essential Douglas and Hemingway guide reads:

“Excellent protection can be found in the inner bay. The narrows are poorly charted, requiring constant vigilance as you transit. They should be attempted only near slack water with utmost skill. Don’t try entering without reconnoitering first by dinghy.”

Chris takes the tender through the narrows at a minus low tide to check it out. He decides it will be possible to take Venture through at high water slack. We spend a relaxing day waiting for 5pm when the tidal flow through the narrows is forecast to be at zero. As we enter the channel, the swirling currents and streaming ribbons of kelp are evidence that the current has already begun to flow quite strongly against us. However we experience no problems and, once through, the narrow passage opens up into an extensive bay. Again to quote the guide book: “The rewards are great - wilderness and solitude with excellent shelter.” It is a lovely anchorage where we drop the hook in a side arm at 1731. We spot one black bear in the distance. Given the tricky entrance, we doubt that many people visit this secluded lagoon.

July 1 Sunday
It is very still in our hidden anchorage. Raggedy, cream-coloured jellyfish pulse slowly through the green water. One is sucked into the raw water intake for the generator and shuts it down - requiring clean out of the filter. We spot two black bears grazing on grass but they are a long way off. I take surprisingly successful underwater video of both jellyfish and kelp - using a small waterproof camera on the end of the boat hook. Showers alternating with brief periods of sunshine persist all day. Using the tender we are able to take pictures of a pale skinned seal perched on a rock in mid channel.

We have to wait until the end of the day to be able to reverse our course through the narrow gateway guarding the entrance to this secluded anchorage. We anchor in the same spot as we did two nights ago.

July 2 Monday
Another really beautiful morning. We are underway at 0838. Out in Chatham Strait we see a humpback whale execute a full breach under ideal conditions in sunlight with snowy mountains backdrop - but a long way off. He performs two breaches but that is all. We change course to his location but see only a few blows.

We head south and turn into Tebenkof Bay on Kuiu Island. First we visit Explorer Basin formed by the Windfall Islands but decide to move on to Shelter Cove further inland and a little north. The way in is convoluted. Along the way we see a mother black bear with three very small cubs grazing on grass. Sadly, she beats a hasty retreat when she spots us while we are still a long way off. We anchor at 1210 under now-overcast skies. There is a single black bear on the beach grazing grass but he saunters off into the trees. We go for a long tender ride up an inlet. We pass number of otters but they too dive when we are still a long way off.

July. 3 Tuesday
Underway at 0800 under cloudless sky. In Chatham Strait, we come across a humpback whale tail and fin slapping. I shoot the best tail photos yet and also some passable video.
After he dives, we continue north with the plan to go into Red Bluff Bay but Chris spots two other boats on the AIS which will arrive ahead of us. There is really only one decent
anchoring spot so we elect to continue north to Takatz Bay where we have been before. The weather remains gorgeous but the wind gusts in excess of 20 knots creating choppy seas and sheets of spray. We anchor in Takatz Bay at 1430. We launch the tender and poke into nooks and crannies only accessible at high tide. A nearby waterfall provides a relaxing lullaby.

July 4th Wednesday
Another still and stunning morning. We are spending the holiday in this lovely spot.