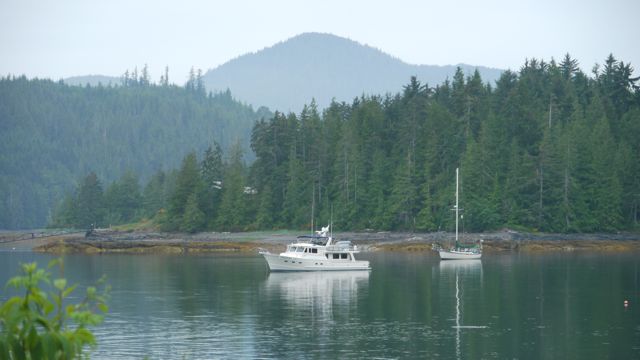 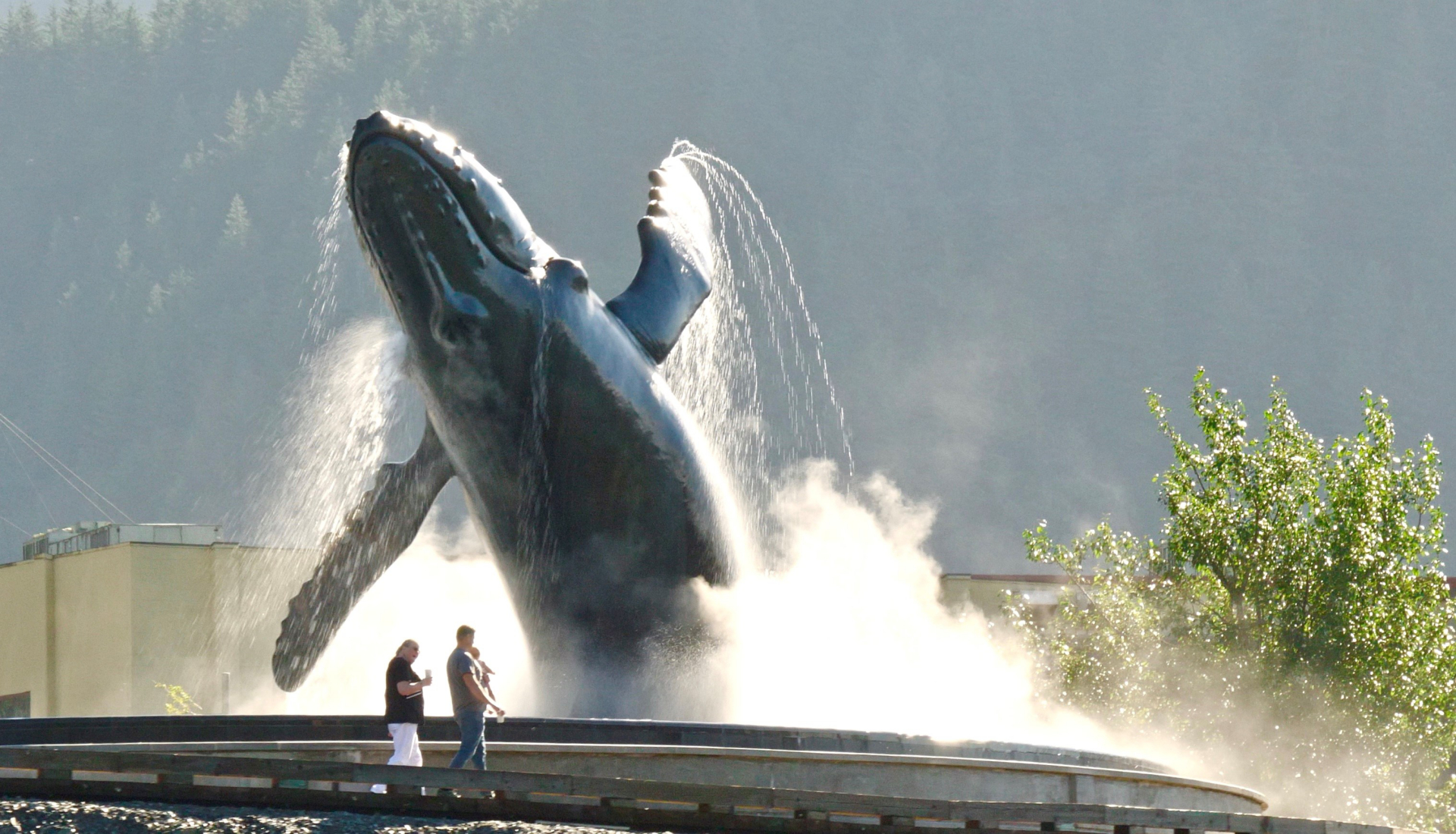 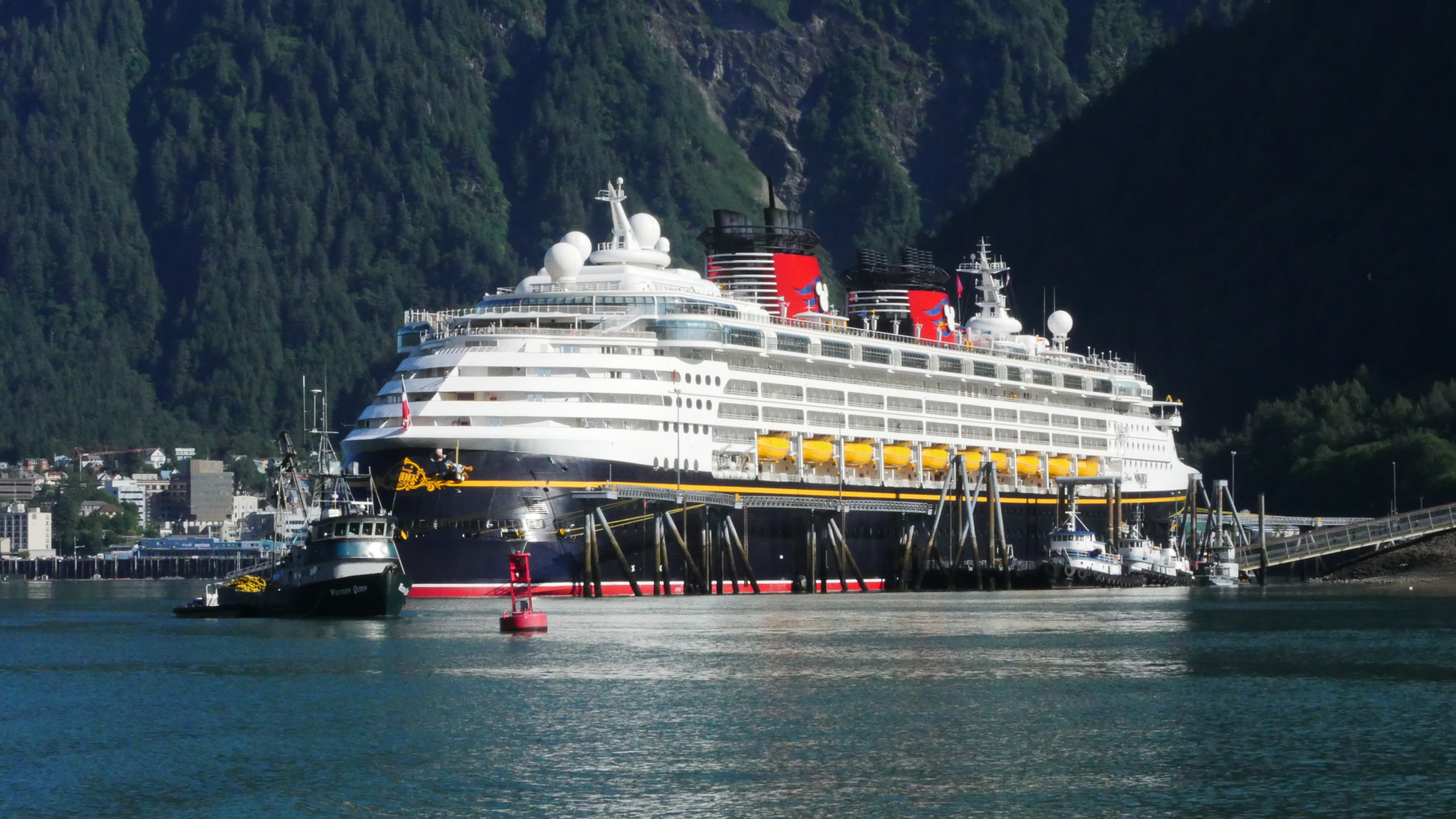 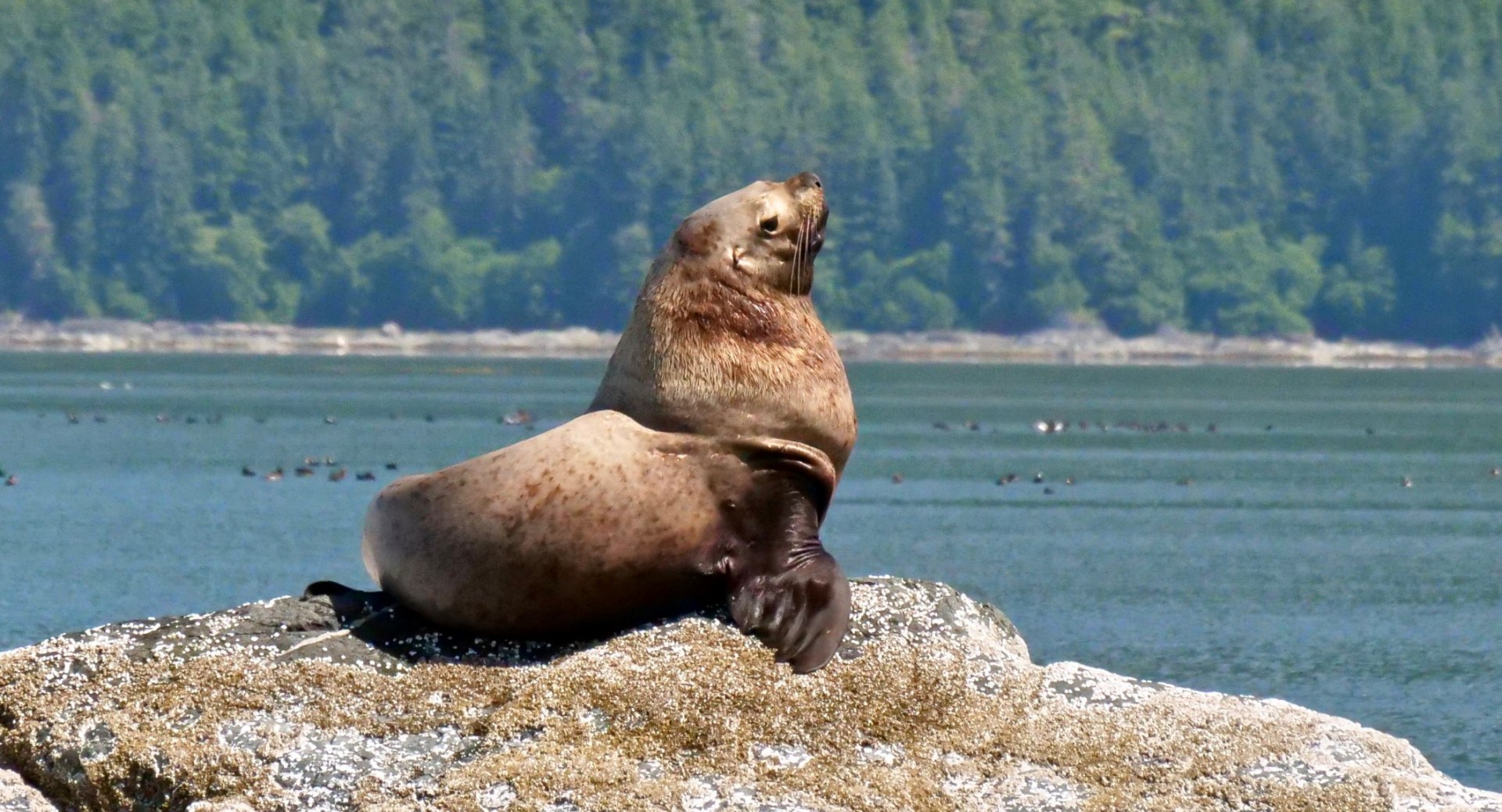 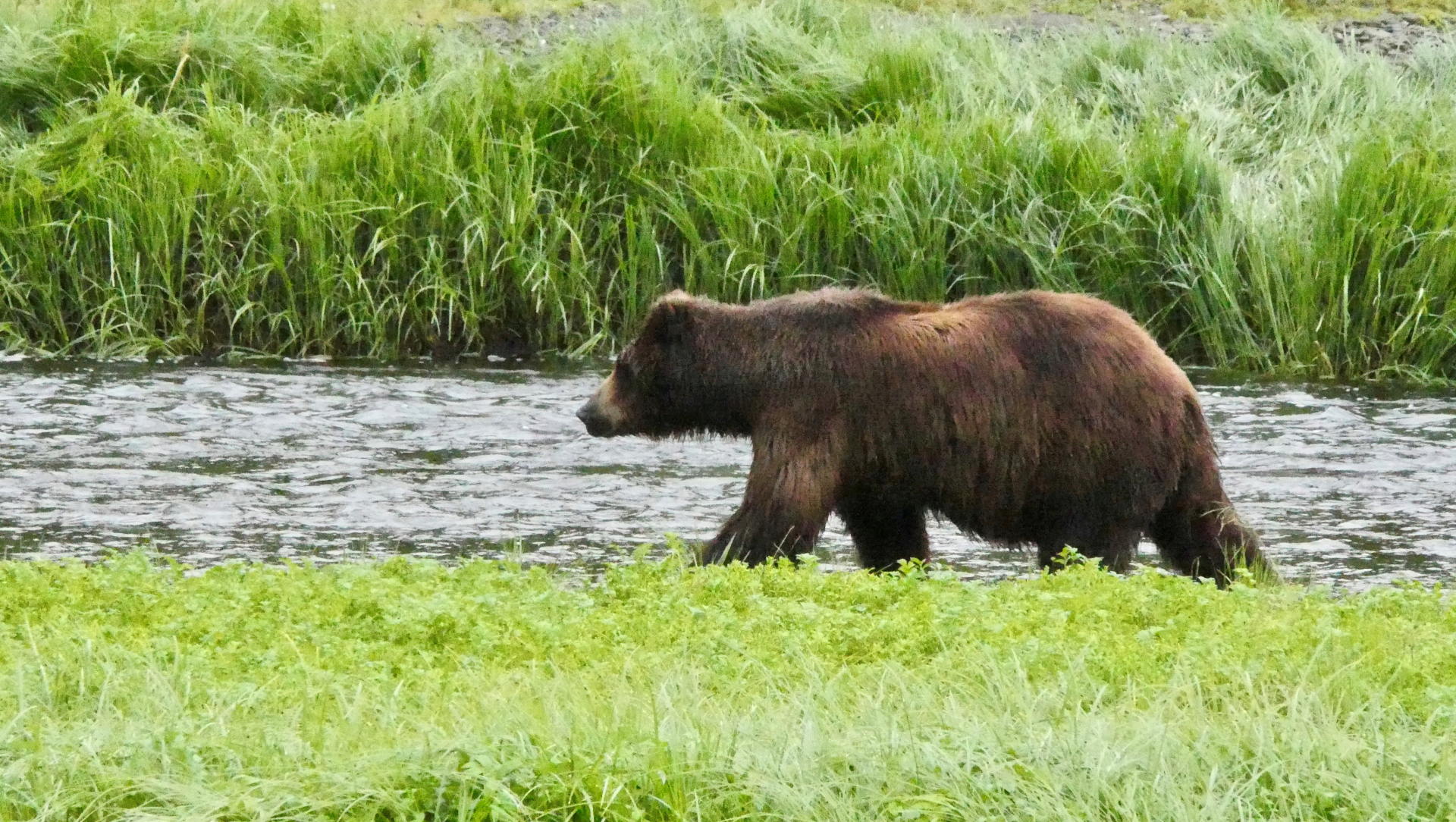 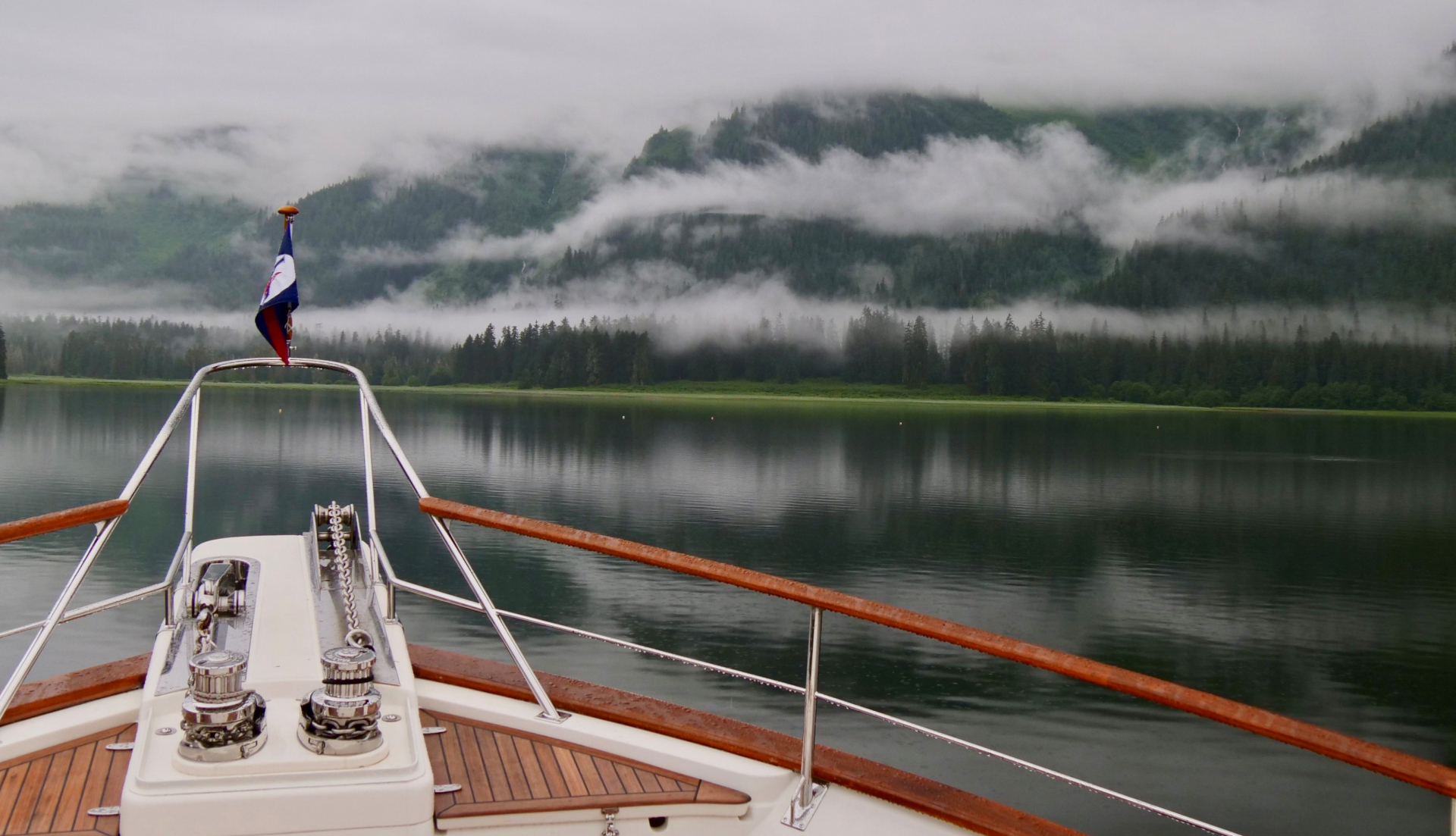 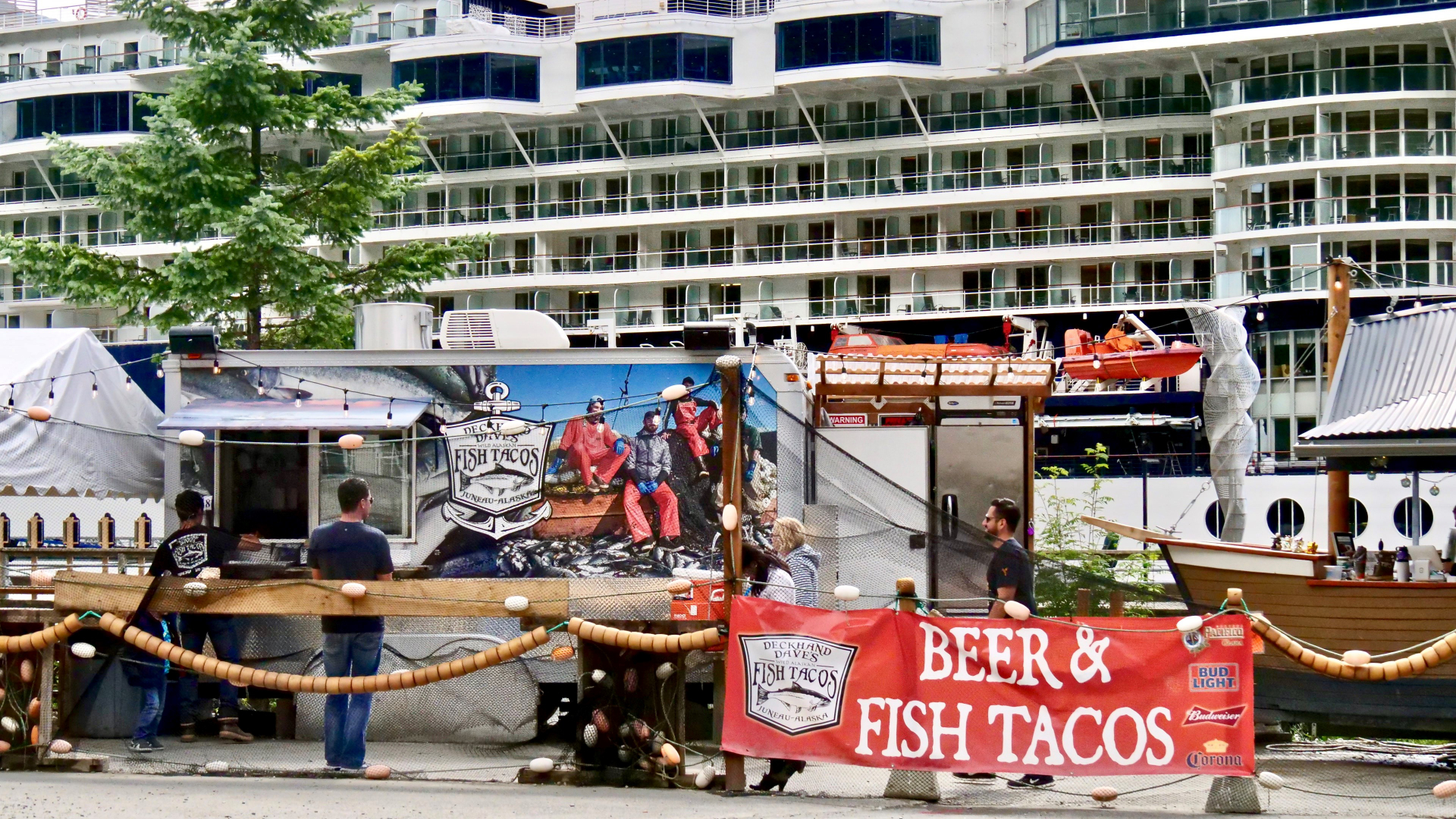 We are at the Government dock in Taku. Rushmore is here as is the small boat who came out of Fords Terror after we had left the area. The owner tells me that, although he had not been expecting ice in the channel, it had not given them as much trouble as the thick ice they encountered in Endicott Arm after leaving Ford’s Terror. We are underway at 1010 and head directly for Juneau, 20 miles away, where we go straight to the fuel dock to take on 1500 US gallons. From here we cross the main channel to Aurora Harbor where, by pure chance, we are allocated a slip next to Fleming 65 Andiamo. Unfortunately the owner is out of town for a couple of weeks.

July 13th Friday
In complete contrast to yesterday’s gloomy weather, we awake to clear blue skies. With an ultra-low, minus tide, care is needed when leaving the dock at 1825. After passing under the bridge linking Juneau to Douglas, we see the impressive sculpture of a humpback whale highlighted with water backlit by the sun.

Surprisingly, there is only cruise ship at the downtown docks. She is the fine looking Disney Wonder.

We head south down Gastineau Channel into Stephen’s Passage and pause at the Midway Islands to take photos and video of seals and sea lions.

We round the end of the long Glass Peninsula on Admiralty Island and turn north into Seymour Canal. We try anchoring in Mole Harbor but, finding it very exposed, full of pots, shallow and generally lacking in merit, we decide to continue on to Windfall Harbor where we anchor at 1718 in water 67ft deep.

Anchoring in the Pacific Northwest calls for experience and paying attention to detail. An initial look at the chart suggests almost limitless places to anchor but a closer look reveals the majority to be too deep - with the bottom rising steeply to the shore. At the head of bays, the depths rise abruptly to extensive flats which dry at low tide - the edge of the drop off being often marked by a line of crab pots. With at tidal range of as much as 20 ft between high and low water, a comfortable depth beneath the keel at high tide can result in going aground at low. Scope is another consideration. For example, when anchoring in 30ft of water at low tide a minimum scope of 3:1 would require letting out 90 ft of chain. At high water, a tidal range of 20 ft would increase the depth to 50 ft - upping the minimum scope requirement to 150ft.

July 14th Saturday
We spend a lazy day in the same anchorage. I write and prepare blog 8 ready to transmit when we return to Juneau and a resumption of communications.

July 15th Sunday
Another day at same anchorage. A breakfast of bacon and eggs starts a leisurely day. The shoulders of surrounding mountains are draped with shawls of gossamer cloud. A steady rain falls all day; It is another minus tide and, through binoculars, we watch bears feeding on grass and switching to salmon when the tide is right.

July 16th Monday
The day dawns with low cloud and steady rain which has continued all night causing the vertiginous streams to descend the mountains with increased velocity. These are not promising conditions for our scheduled visit to the bear viewing area in nearby Pack Creek. Because we figure the ultra low tide will prevent the returning salmon from entering the river, it is noon before we re-locate Venture 3.7 miles and launch the tender. Once ashore, the tender has to be attached to a pulley system to keep it off the beach. A ranger provides an orientation before, as instructed, we walk along the high water tide line for at least 1/4 mile. We join others in log-surrounded area overlooking the river. Over the course of the next few hours we chat to the ranger and other guests while we wait for bears to come close enough to photograph. Light rain continues to fall on and off all day. A couple of bears briefly come within camera range allowing me to take a couple of stills plus some video.

We are waiting for the incoming tide to bring in the salmon but this turns out to be a mistake. At high tide, the water is too deep off the viewing area for bears to catch fish and they move up stream away from our viewing area. I have to admit tp some disappointment but it is always luck of the draw when it comes to the weather or watching wildlife.

July 17th Tuesday
An utterly calm and beautiful misty morning - much better than yesterday. I take photos of mist drifting through the trees and draped over the mountains.
We are underway at 0803. In Stephen’s Passage we encounter dense fog and, once again, radar proves its worth. I video an ice floe appearing, wraithlike, out of the mist. The Midway archipelago - we visited on the way south - appears as fantasy islands floating on a sea of mist. We thread our way through an obstacle course of fish boats and nets as we approach Taku Harbor.

There is ample space for us at the government dock where we tie up at 1420. Our lines are taken by a fellow boater with a Cheoy Lee trawler built in Hong Kong in 1987. He tells us that the original owner had taken this forty-ish foot boat around Cape Horn. Several other boats come in including lone guy with small sailboat who lives on his boat year around and prefers to anchor in secluded bays during the winter months. Across the cove, the shoreline is littered with a plethora of crab pots - more than I have seen since leaving Maine on the US east coast.

July 18th Wednesday
Underway at 0810 we encounter more thick fog in Stephen’s Passage en route to Juneau. There is a fish opening and the fog conceals a fleet fish-boats - very few with AIS. In Gastineau Channel, visibility improves and we see Fleming 50 hull #3 coming towards us. We are able to communicate with them on VHF. It is good to see a 2006 boat this far north. We arrive at the fuel dock at 0938 for a quick top up for calibration purposes. Munching our complimentary popcorn we move across the channel to a slip in Harris Harbour at 1108.

Juneau is the capital of Alaska and plays host to an endless stream of cruise ships between May and September. Some of these behemoths are alarmingly huge and dominate the downtown waterfront.

We will be here in Juneau for six days before we move on - this time providing a platform for a pair of professional filmmakers. Should be interesting!