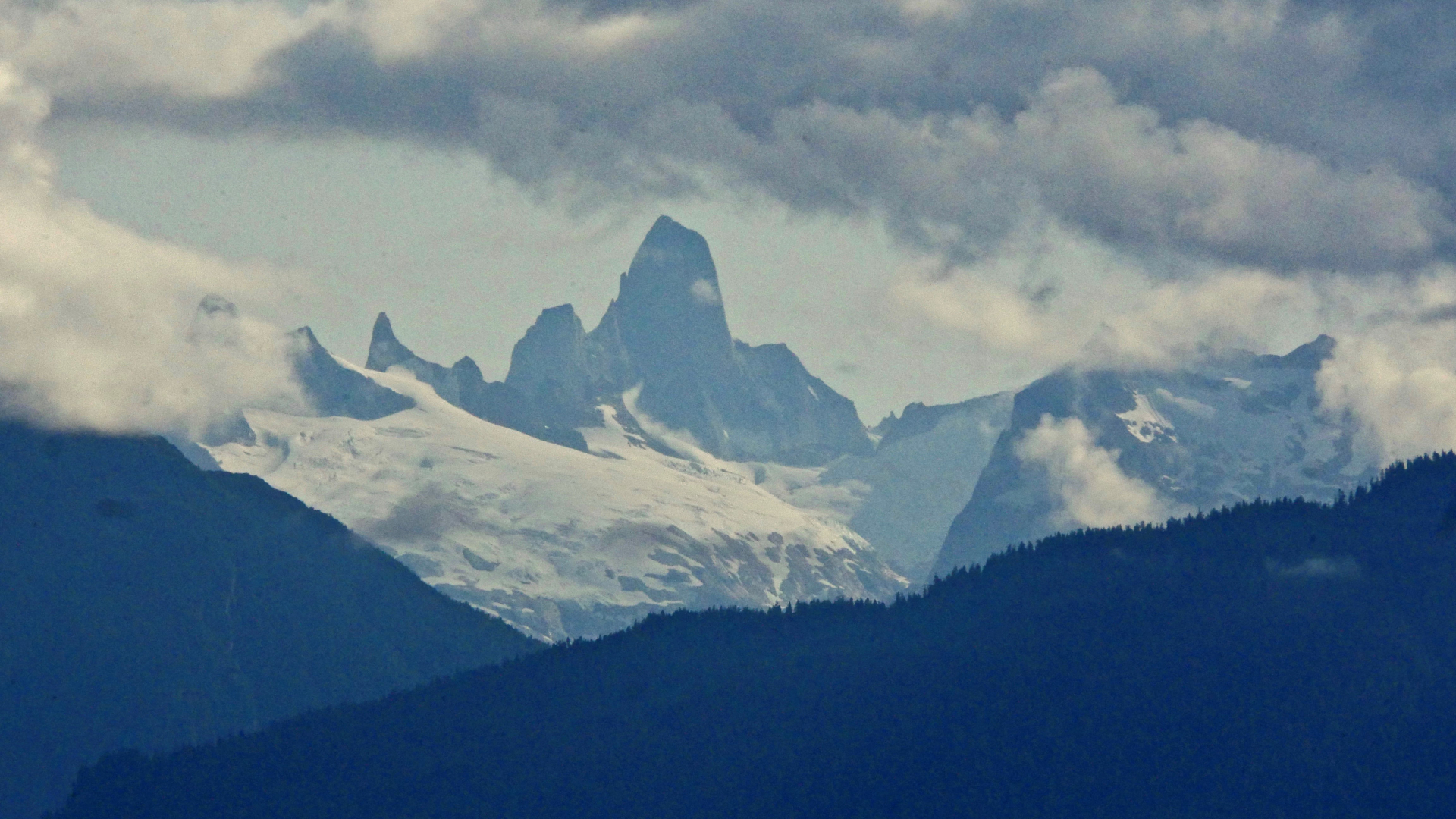 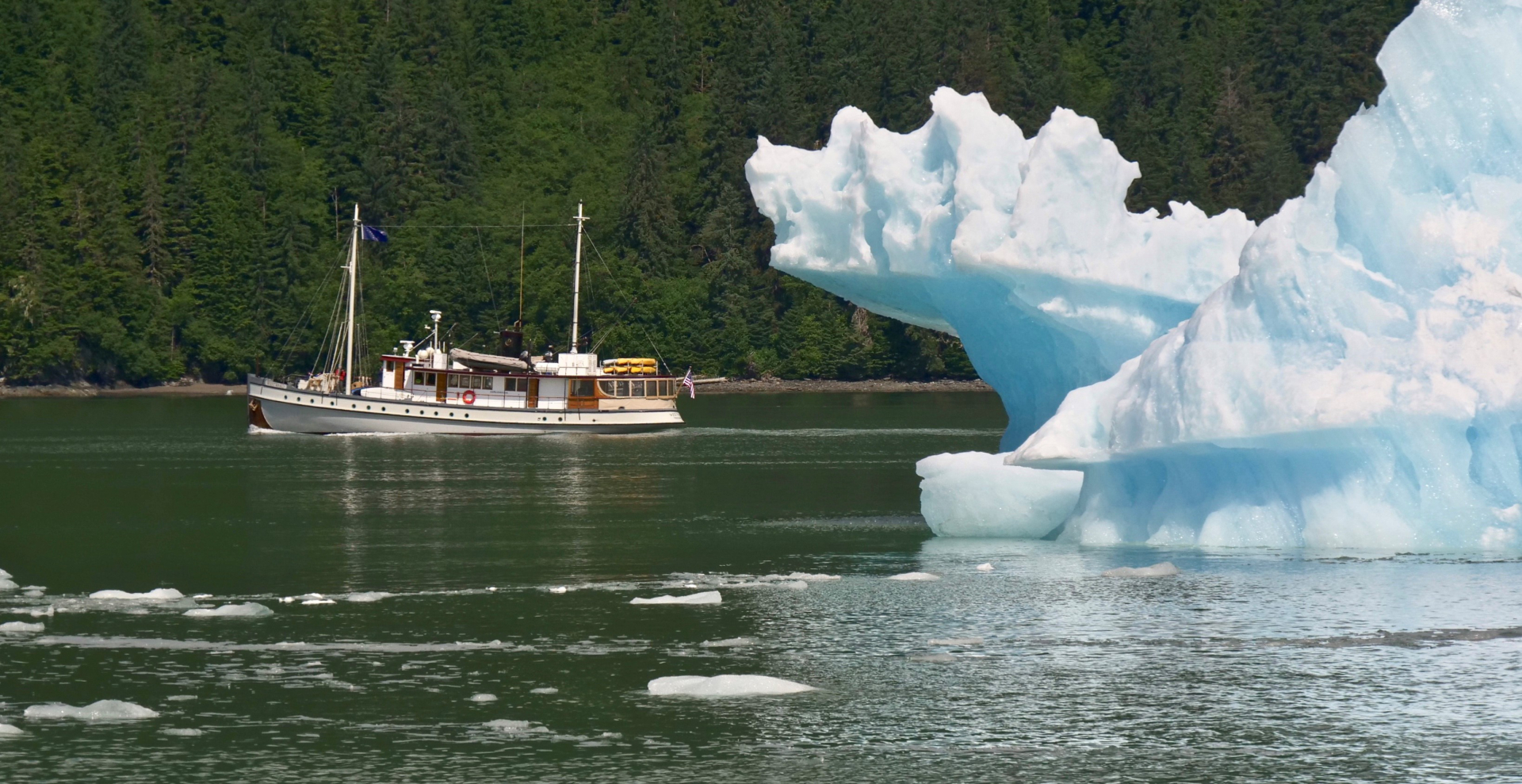 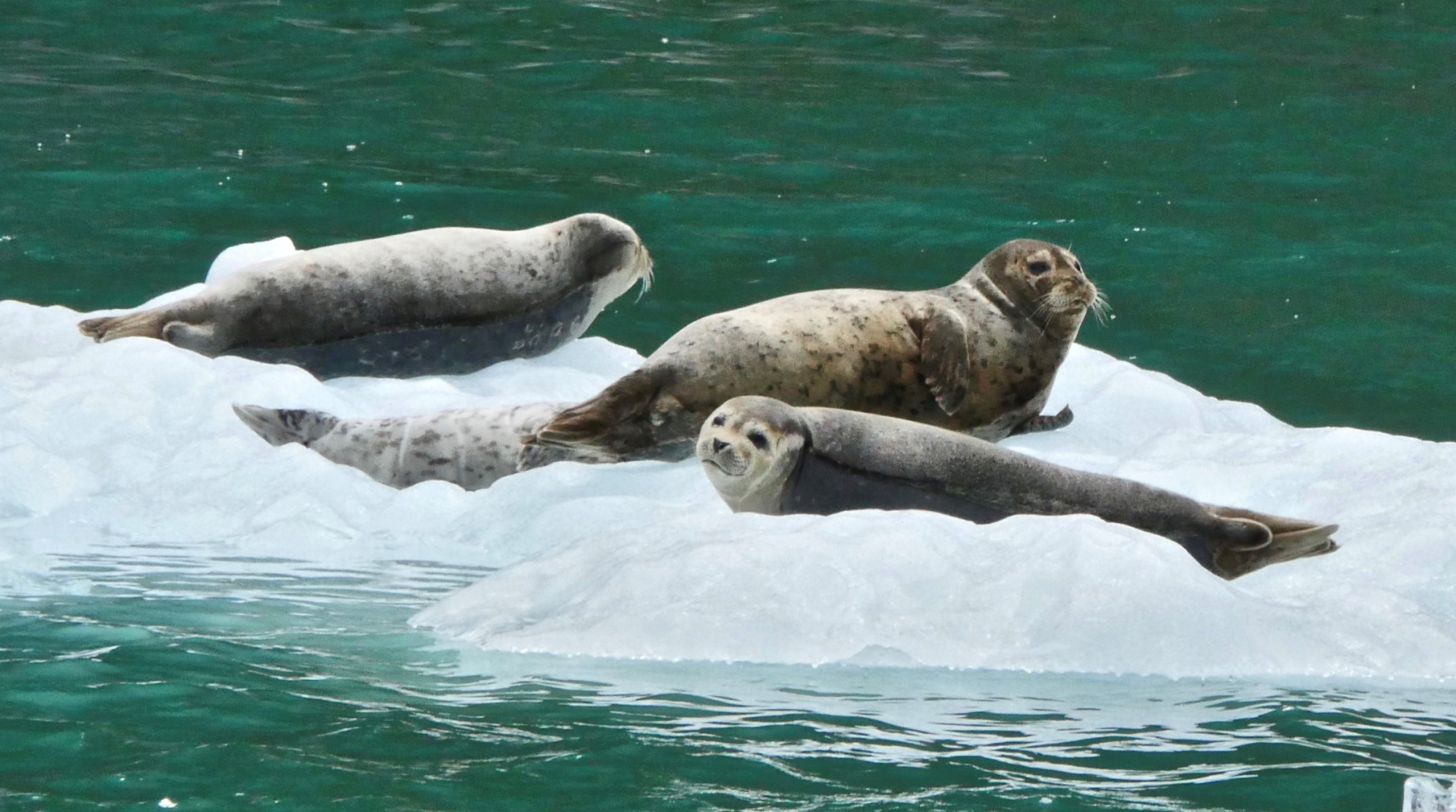 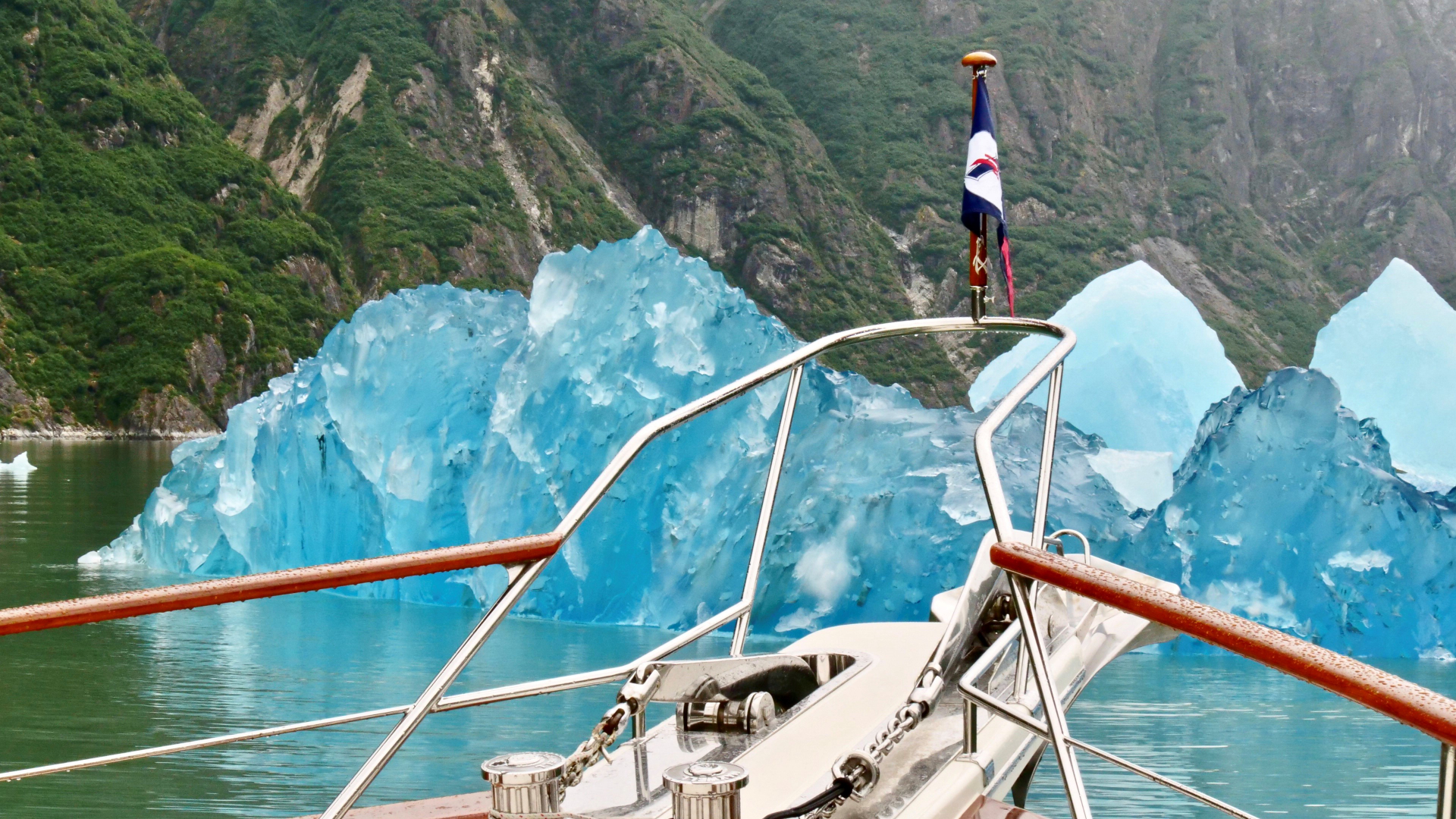 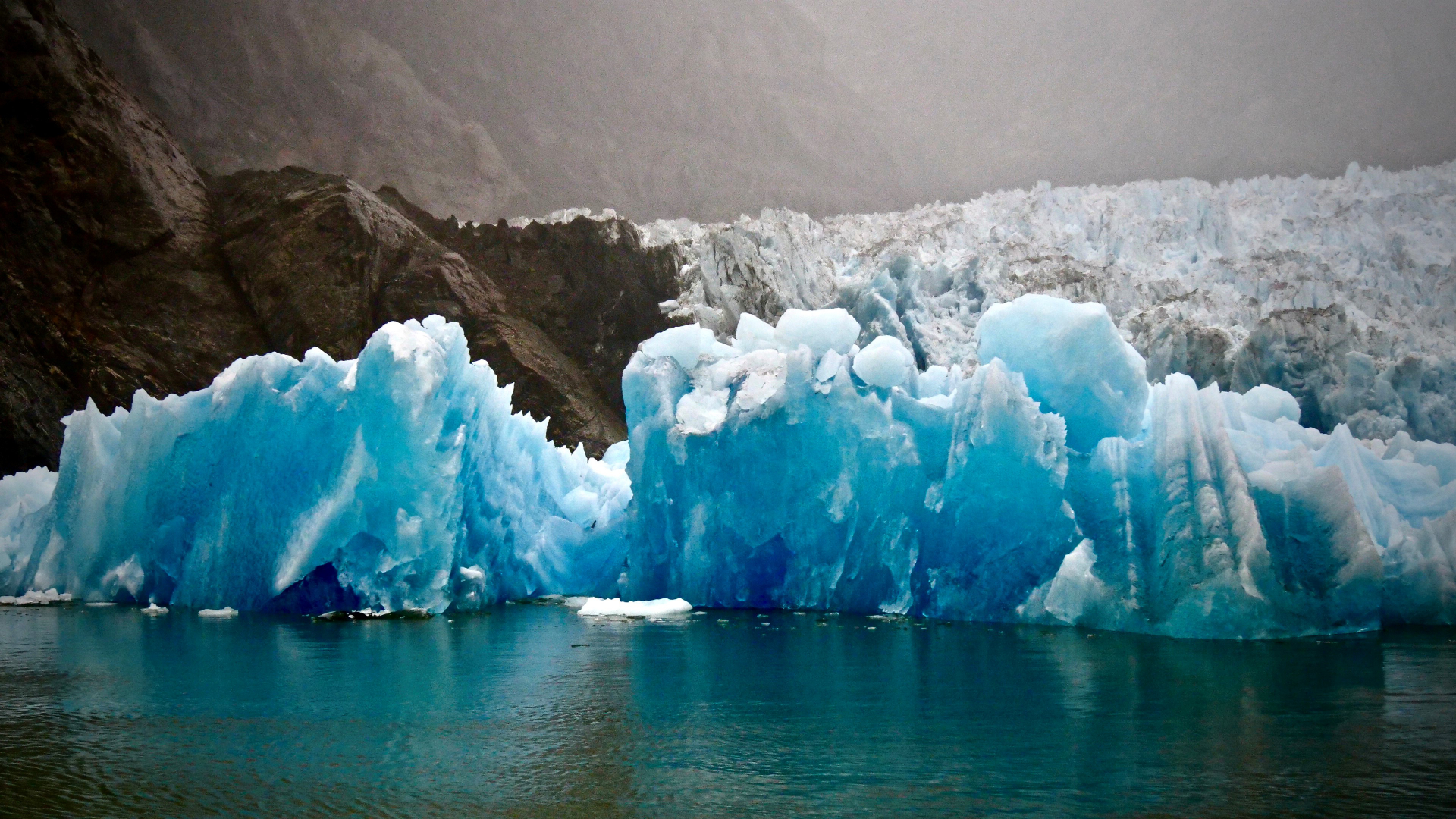 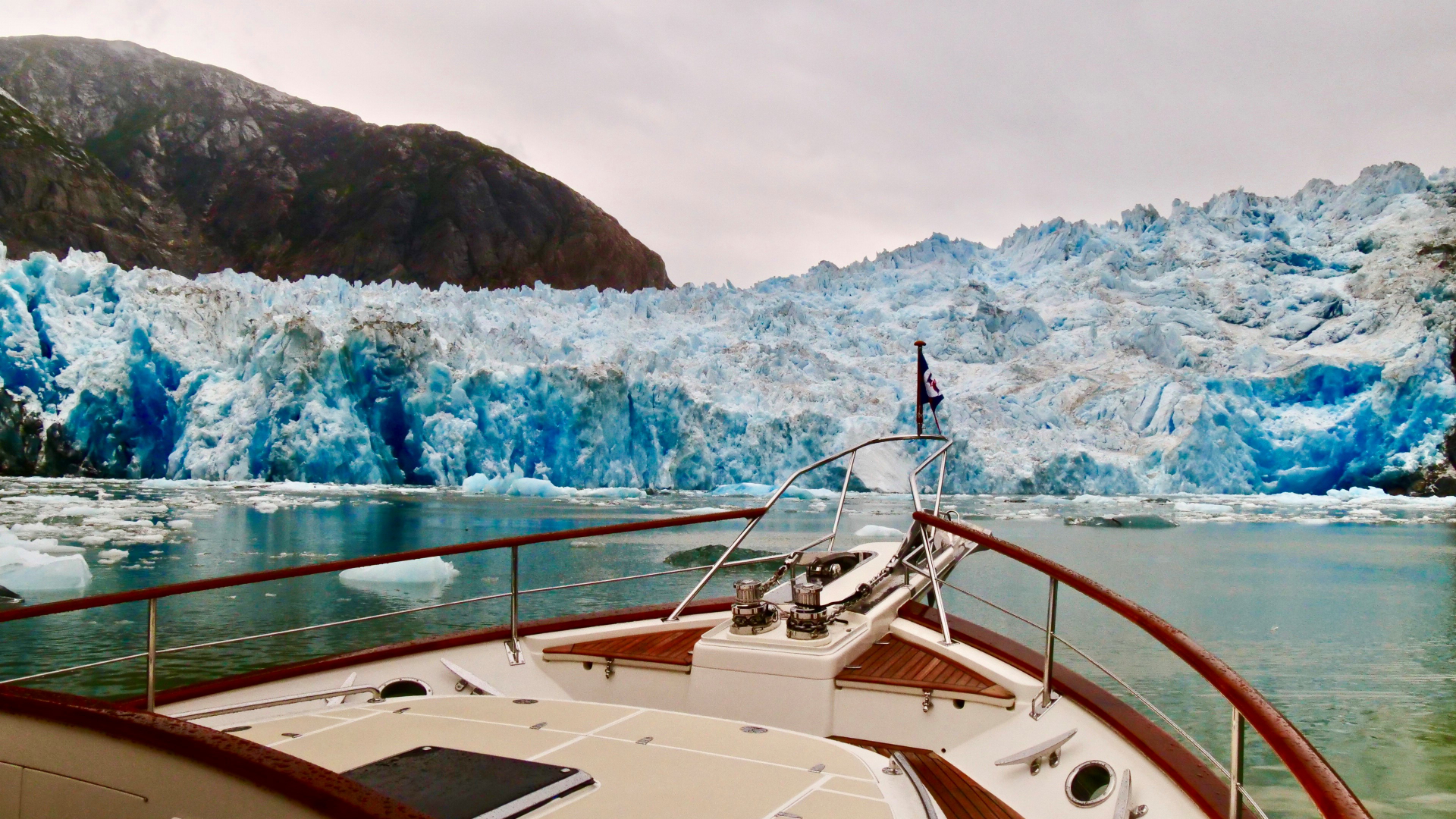 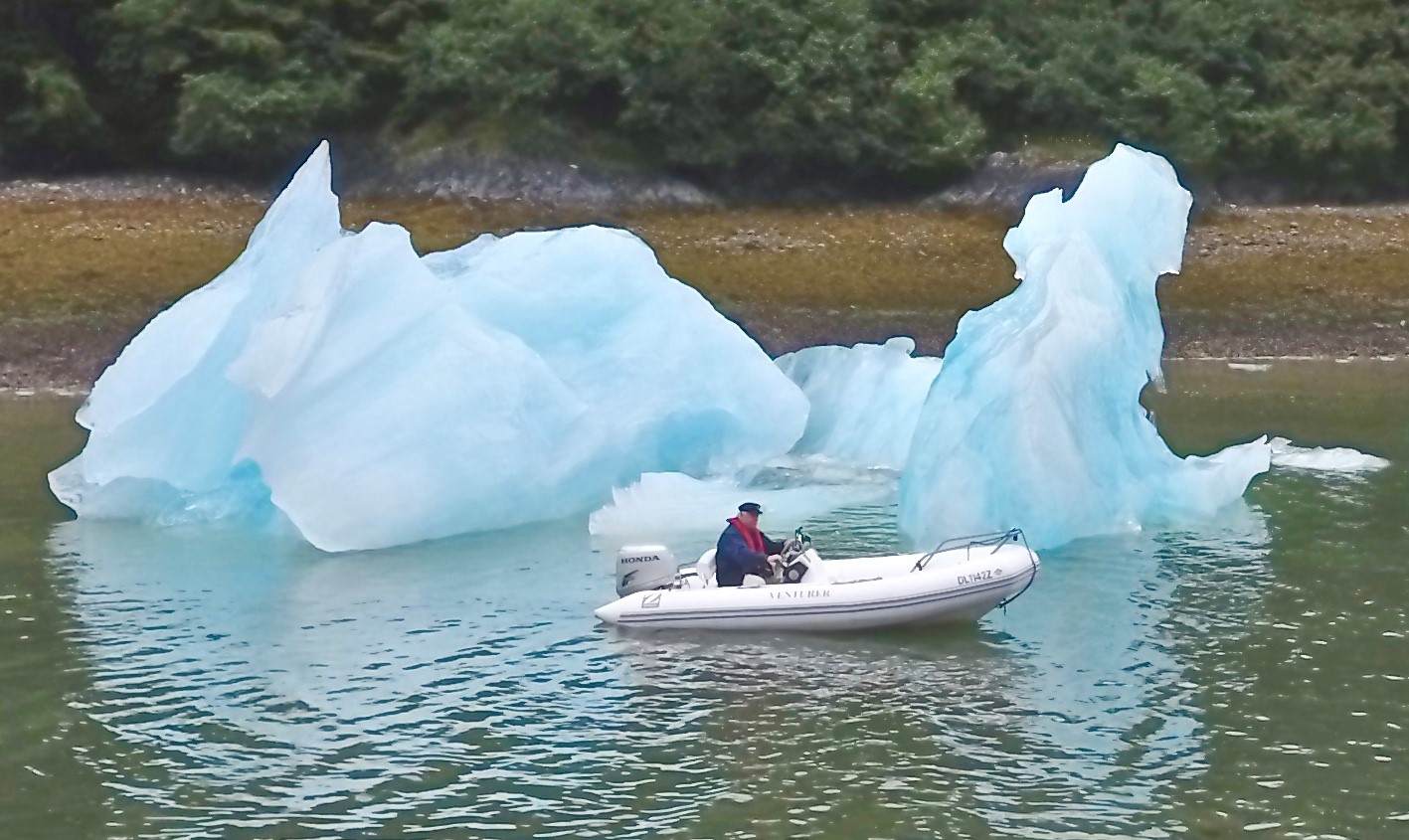 Tony in dinghy with ice floes 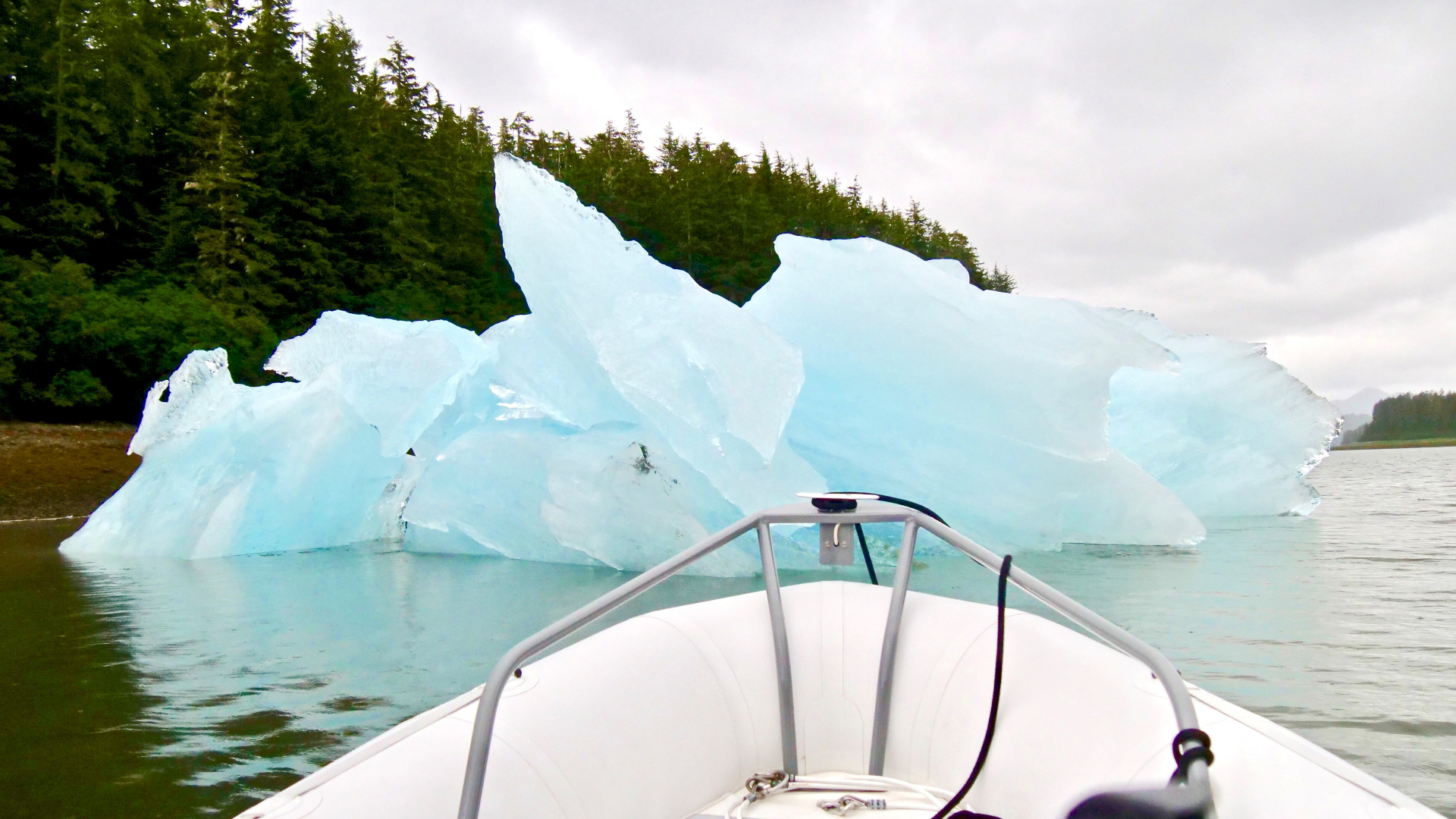 We awake to a stunning morning and spend the holiday peacefully anchored in Takatz Bay.
Three commercial seiner fishing boats come in and drop anchor. They are strategically positioning themselves for an opening tomorrow. Today they are relaxing, with several crew members launching kayaks to explore the bay. We speak to one of them who tells us he works aboard seiners in SE Alaska during the salmon season and out of Dutch Harbor into the Bering Sea for the crabbing season in January. In between fishing seasons, he resides in Southern California. The evening calm is shattered by occasional fireworks. We celebrate with a dinner of roast pork followed by fruit pie a la mode!

The rattle of an anchor chain in the wee hours marks the arrival of the small cruise ship, Admiralty Dream. The seiners have already departed by the time I surface at 0630. We are underway at 0813 and encounter an armada of these vessels setting their nets at the entrance to Takatz Bay and along the adjacent coast. The so-called skiff carried by seiners resembles an oversized aluminium bathtub which could comfortably accommodate an entire, mud-splattered football team. A light aircraft monitors the activity to ensure everyone follows the rules.

It is an another stunning morning. We spot two distant humpback whales logging in the surface as we head south down Chatham Strait. We turn into Frederick Sound and thread our way through a pattern of islands to Gil Harbour in Keku Strait. Our chosen anchorage fails to live up to expectations so we continue on to Portage Bay where we have anchored before. The seas are flat calm with sunny skies and occasional fine-weather cumulus. Under these placid conditions - and against all logic - the surrounding mountains lack their usual drama and appear diminished in size. It is uncomfortably warm while at anchor. This is not to last and, soon after we retire for the night, a mischievous wind arrives and gusts in excess of 30 knots transform the calm waters into a churning mass of frothing white caps. At 11 pm, Chris decides we need to move the boat to a more protected area of the bay. The operation goes smoothly with our new vertical windlasses and stainless steel chain. We let out 160 ft of chain for 20 ft depth of water and return to our beds.

The wind subsides during the night and, in complete contrast to yesterday, the skies are blanketed in cloud. We are underway at 0900 and Chris spots Andiamo, a Fleming 65, on the AIS. Using binoculars, we can just see him in the distance as we exit Portage Bay. We exchange news over the VHF. We arrive in the town of Petersburg at 1145 and tie up in north Harbor. Previously we have been in South Harbor in the older part of town. North Harbor has better docks but is a bit pungent from the fish processing plants now in full operation. There is much activity with fish boats unloading their catch and taking on ice. I notice many strange creatures growing on docks underwater and am able to video these by lying full length on the swim step and hand holding my small waterproof camera under the chilly water.

We do some provisioning in the morning and afterwards enjoy a pleasantly relaxing day. Apart from a Chinese restaurant near the ferry terminal which is quite a hike from North Harbor, Petersburg is almost entirely lacking in restaurants. We go for pizza in the evening and are the only customers who not accompanied by kids.

We get underway at 0807 and head for LeConte Bay which we have always bypassed on previous visits. The guide book is not encouraging: “Its remoteness, difficult entrance and lack of navigation aids mean that it is seldom visited by cruising yachts. The water is opaque, giving you no visual warning of depth or rocks. We do not recommend it, except for expeditionary-type excursions.” We decide to check it out anyway and find that conditions have changed since that was written. Along the way we have a good view of the Devil’s Thumb - a jagged peak, 9,077 ft high and frequently visible from Petersburg

It is a beautiful day with sun and broken cloud. We pass large ice floes and are able to work our way through the brash ice to within two miles of the face of the glacier.
Another boat, Westward, reaches the glacier face by keeping close to the north shore. There are many seals resting on the ice. On the return journey we pause near a couple of large ice floes to take photos and use the drone. A small sight-seeing boat passes right beneath the towering end of the floe and has just moved away when, without warning, a huge chunk breaks off and topples with a tremendous crash into the water landing where, just seconds earlier, the small boat had been located. It was a close shave and a timely warning to keep a safe distance from these beautiful but treacherous castles of ice.

We move on to Thomas Bay and anchor at its southern end at 1538 where there are already four other boats. It is a beautiful evening.

Underway at 0847. As we exit Thomas Bay, Chris spots a Sitka Black Tailed Deer with horns still in their velvet phase. This beautiful animal watches us from a tiny islet at the very tip of Ruth island. He could only have reached this spot by swimming.

We pass into the calm and silvery waters of Frederick Sound. Chris suggests flying the drone while we are underway - resulting in some marvelous video. We continue up Steven’s Passage and pass between the red and green buoys marking the entrance into Holkham Bay which serves as an anti-chamber to both Tracy and Endicott Arms. We anchor in the un-named cove just off Holkham Bay at 1626. There, already at anchor, we find Rushmore belonging to a longterm friend and past Fleming owner who invites us aboard for cocktails and a tour of his fine vessel.

We pull anchor at 0726 and head up spectacular Tracy Arm. Along its length, tall rock faces rise sheer from the green water and waterfalls tumble from the towering heights. Numerous ice floes - many glistening an electric blue - dot the water.

The ice stems from the north and south arms of the Sawyer glacier at the head of the fjord. We first visit the north arm where there is a small cruise vessel and little ice before moving on to the south arm where the water is strewn with ice calving from the crumbling glacier face. The crack and rumble from each ice fall reaches our ears only after the actual event is over. We wait impatiently in anticipation of seeing a major calving and finally, after 1 1/2 hours, our patience is rewarded and I capture the cascading ice on video.

We return to the same anchorage as last night. As we enter, we are pleased to see that, for the first time, the secluded northeast corner of the bay we have always coveted is unoccupied and available for us to anchor at 1557. As always, be careful what your wish for! The entrance to this cove is shallow except for the unmarked entrance. Ice floes are frequently grounded on the shallow spots. It turns out our favored anchor spot is in direct line with the deeper entrance channel. After all of us - except Chris, our diligent captain - have taken to our beds, a large and beautiful errant floe enters the cove and wants to snuggle up to Venture. Just before midnight Chris sounds the alarm and, once again, we need to pull up the anchor and relocate to another part of the bay.

This morning our visitor from the previous night is aground on the shore close to where we had been anchored. It is hard to gauge its size so I embark on the tender for a closer look while Chris launches the drone. The floe has somewhat disintegrated since last night with pieces distributed along the shore but it is still very large and remains an impressive sight. We are just in time with our photography which is brought to an abrupt end by the onset of heavy rain.

We up anchor at 0825 and head out through the entrance into Holkham Bay. A strong tide is running and the red buoy is almost submerged in the turbulent water. We head up Endicott Arm where there is more ice than we have ever seen on previous visits. We have to move at idle speed and it soon becomes evident that it would be impractical to try to reach Dawes Glacier at the head of the fjord 30 miles away.

Instead, we settle on going just as far as Ford’s Terror. Even so, we have difficulty reaching the cascade waterfall just north of the entrance. Once here we are able to take Venture’s bow right up to the falls in water 80 feet deep. We turn next to approaching the tricky entrance into Ford’s Terror which can only be navigated at slack water. We are still one hour ahead of slack and, through binoculars, we can see large chunks of ice being tossed around in turbulent water ripping through the narrow gap at impressive speed. If we enter at slack water we will still have to deal with the ice in the channel and, as slack lasts only a few minutes, it is not worth the risk. We decide to postpone our visit for another time. We later speak to someone aboard a boat that exited this place one hour after we left. He said he had no serious problems but, when they entered the day before, there had been no ice so it came as a surprise to encounter it when they came to leave. Such are the hazards and uncertainties of navigating these areas.

From here we go to the small government dock in Taku where we tie up at 1730. We are now just 20 miles from Juneau where we will take on fuel.